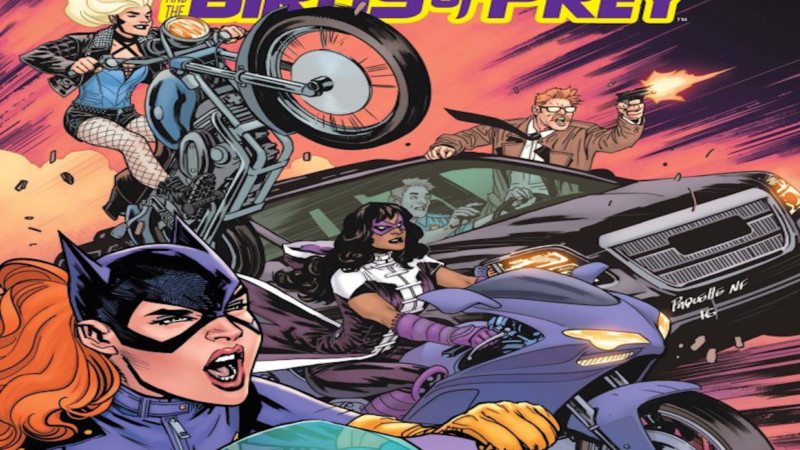 BATGIRL AND THE BIRDS OF PREY #2 had a great deal of pressure on it. While the REBIRTH one-shot and first proper issues of the series showed a lot of promise, they were also both very flawed. It felt as if time was beginning to run out for writers Julie and Shawna Benson to truly kick off their BOP run in a special way.

The issue begins with Batgirl, Black Canary, and Huntress escorting Santo (the mid-level mobster who they agreed to protect in exchange for information on Oracle last issue) to a GCPD safe house provided by Jim Gordon. The trio is forced to fend off some of Santo’s men who’ve launched a “rescue” mission, but they’re easily run off by Black Canary and Huntress. 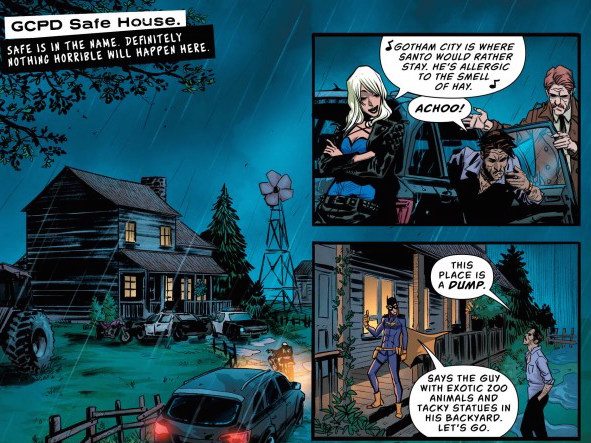 Once Santo is secure, the Birds go back to hunting Oracle and Fenice (the mysterious mafia boss she’s working for) despite protests from Gordon and Batman. Both try and convince Barbara that she and the others are in over their heads. However, she’s able to convince Batman that she’s got the situation in hand. With that behind them, the trio track Oracle’s signal to a software farm, where they find themselves caught in an explosive trap, ending the issue.

BATGIRL AND THE BIRDS OF PREY #2 is a vast improvement over the first two issues. Interestingly, the issue’s plot on paper seems like it would be total filler. There’s very little actual plot development outside of the cliffhanger ending. The bulk of the story is made up of character pieces between Batgirl, Black Canary, and Huntress, and the Bensons knock these out of the park.

The way the team is slowly starting to trust each other makes for some compelling reading. Particularly of note in this regard are the interactions between Canary and Huntress during the rooftop sparring match between the two. Their conversation is beautifully layered, communicating that the two still have some antagonism towards each other, while at the same time showing that they are growing open to the idea of working together. 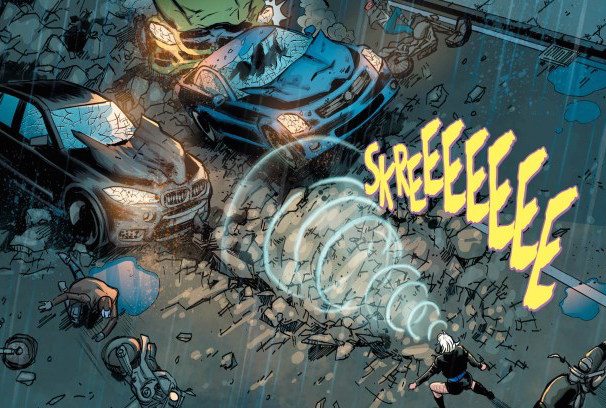 The respective conversations between Batgirl and Gordon, and Batgirl and Batman are another major highlight of the issue. I particularly enjoyed the interesting way the writers played with Barbara’s identity dichotomy. In her conversation with her father, she’s dressed as Batgirl while later she speaks to Batman sans mask as Barbara. In the former conversation, a steeled up Batgirl angrily shoots down Gordon’s doubts about the Birds’ abilities, while in the latter a more emotional Barbara confesses to Batman that their mission (of finding out who’s using the Oracle identity) is personal to her. It really plays with the idea of which version represents the “real” Barbara and which is actually a mask, implying that she’s more “in character” as Batgirl around her father while Batman gets to see the “true” Barbara.

The art, from Claire Row and Roge Antonio, is also improved. The erratic nature and off-model characters that plagued the first two issues have been eliminated for the most part, outside of a few mismatched Black Canary panels. The facial expressions are also vastly improved, eliminating the over-the-top and at times strange design choices seen last issue.  From an artistic standpoint, the highlight of the story is the motorcycle/car fight scene that forms the first third of the comic. 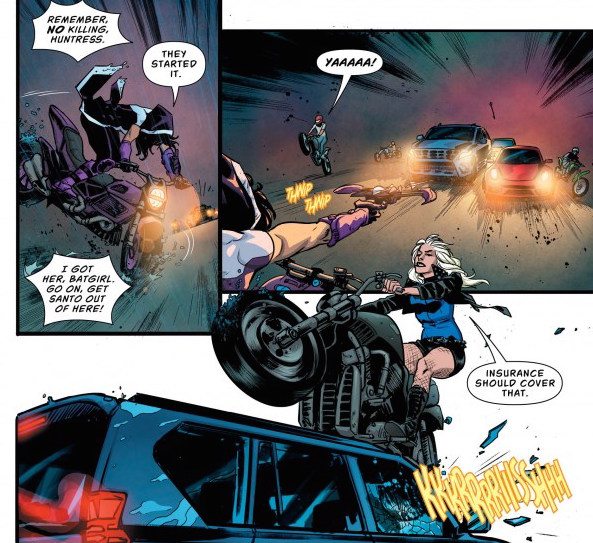 After two relatively disappointing issues, BATGIRL AND THE BIRDS OF PREY #2 is a huge step up for the series. It delivers on all the promise of the best of those issues, while improving on nearly every flaw. If the Bensons continue at this pace, their run will be a memorable one after all.