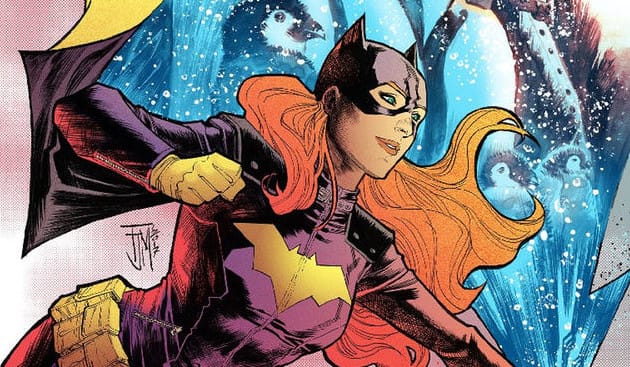 It’s amazing how much the current iteration of BATGIRL feels like BUFFY THE VAMPIRE SLAYER. The witty dialogue; the San Francisco-esque setting; Barbara’s struggles with super-heroing versus trying to be a student and have a social life; dating a potential villain she’s still attracted to. It seems like Joss Whedon’s original series had an impact on writer Hope Larson, along with similar shows, and that’s a great thing for this particular arc.

“Son of Penguin” continues in BATGIRL #9 with Batgirl on the tail of Ethan Cobblepot, a man playing good guy entrepreneur but potentially conducting devious schemes through his company’s popular phone apps. Oh, and Barbara is dating him. Barbara Gordon is basically Buffy Summers, aged a few years and romancing Bat-villains instead of vampires. 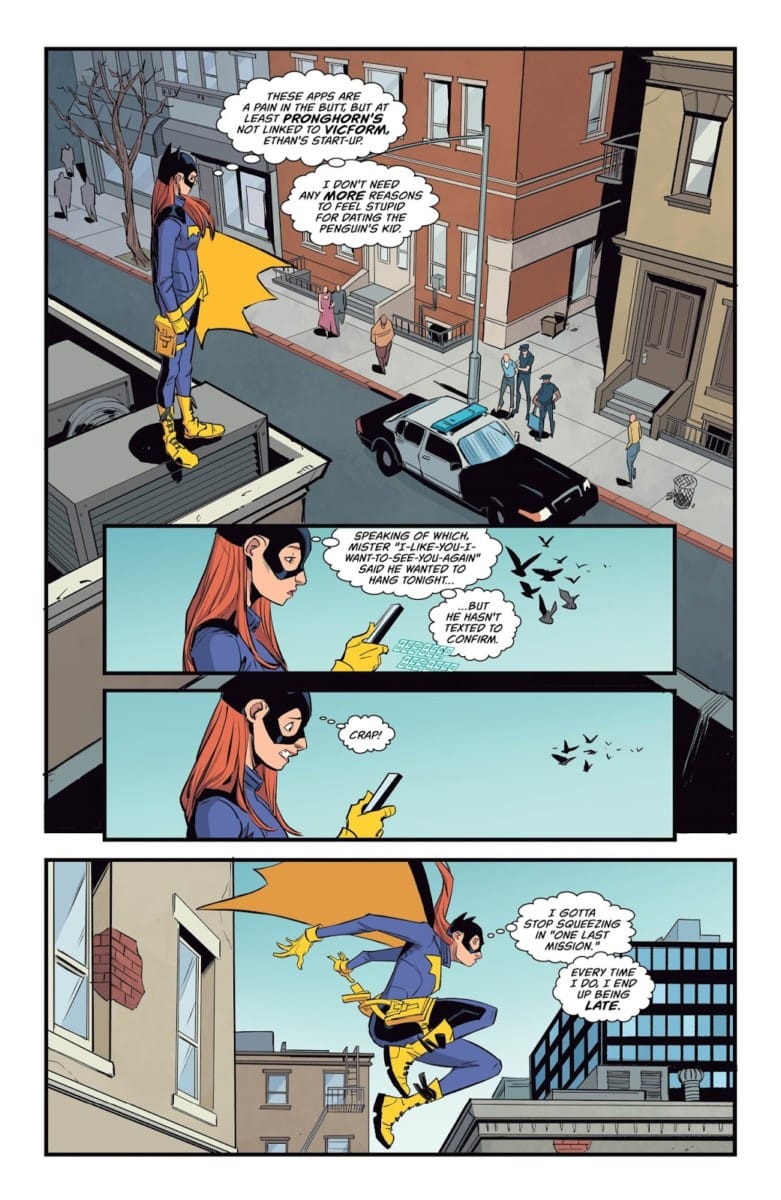 BATGIRL #9 follows Barbara through a number of enjoyable plot threads. The issue opens with her taking down a criminal who’s using yet another new phone app to disguise breaking and entering. From here Barbara, late for her teaching gig, discovers all the kids are hooked on an app called DOGGO. It’s basically a tracker app that lets kids customize a virtual dog and walk it all over town.

The app is created by Vicform, Ethan’s company, and Barbara is suspicious that it’s secretly being used to track Batgirl’s movements since she was repeatedly caught in the background of the app for a Buzzfeed-style post.  As Batgirl tries to solve this mystery, several other problems arise. Barbara’s good friend is having relationship problems, Barbara is behind on her homework, and Barbara happens to be very attracted to the handsome possible-criminal she’s tracking down. Basically, the curveballs thrown at her aren’t plot-related. They’re life-related.

One reason I like the BATGIRL series so much is this balance between superhero activities and everyday life. It’s an endearing combination, utilized in both BATGIRL and NIGHTWING. Barbara Gordon and Dick Grayson are younger than most of the other heroes, there’s a certain innate relatability these characters have that titanic figures like Batman and Wonder Woman never could. It’s the defining quality that made BUFFY so engaging, and it works like a charm in BATGIRL.

At times, I’m more invested in Barbara’s everyday struggles than the mystery plot with Ethan. When Barbara’s friend comes to her for help because she’s not sure if she wants to have a baby, the problem takes center stage for Barbara because she’s not just a crimefighter, she’s a friend. Barbara, desperate to study, finally manages to write down a few essay sentences, but she’s completely distracted by all the other problems going on in her life and can barely focus. She wants to be a good student, but she’s also a superhero. She knows Ethan isn’t trustworthy, but when she’s touring an art museum with him and he sweeps her behind a secluded statue and kisses her, she falls for him a little. These aren’t the problems of superheroes. They’re the problems of everyday people.

READ: We recently interviewed Shawna Benson and Julie Benson, writers of that other BATGIRL series, BATGIRL AND THE BIRDS OF PREY!

Larson absolutely nails these human moments, and they’re a joy to read. Barbara’s thought-bubble commentary over these events is also extremely engaging. Much like Buffy, Barbara has a keen eye and a sharp tongue. She’s filled with all kind of ironic quips about the situations she faces. When she’s typing her essay about libraries, she wonders how to get tech bros to use them. “Maybe if we add a craft cocktail bar to the reference section,” she answers herself. Lines like this add a great deal of levity to her situations, humanizing her all the more. 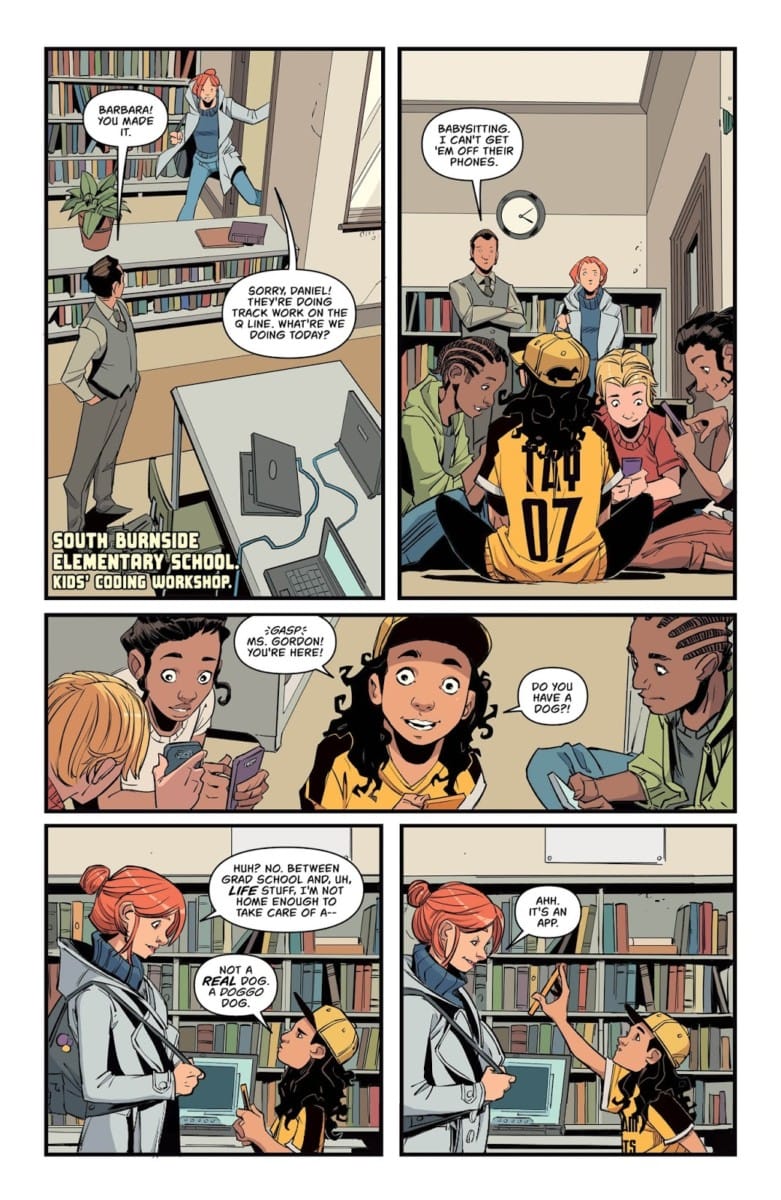 Another reason I admire Larson is her ability to change her storytelling tone dramatically. The previous arc set in Shanghai was much more a globe-trotting adventure. If felt more like Indiana Jones than Buffy. That arc was just as engaging, but with Larson’s switch to Barbara’s home in Burnside, the storytelling has become more grounded, shifting to a smaller narrative that offers more detail and nuances. The app obsession overtaking Burnside’s kids has the feel of distinctive social commentary. When kids in a library are huddled over their phones instead of books, I can’t help but feel Larson is taking a swipe at technology’s mind-numbing effect on children. Such social commentary adds yet another layer to this engaging comic.

READ: Bane’s been busy wreaking havoc over in Gotham. Read all about his assault on Arkham Asylum in our review of BATMAN #19!

Special mention must be made of the artwork by Chris Wildgoose. He’s a large part of the reason the vibe of this comic is so accessible. The way he draws the characters is very different from most comic artists, who tend to draw their characters ridiculously muscular and larger than life. That style would be antithetical to Barbara’s story. Instead, the characters are sketched out small and normal looking. Barbara doesn’t look particularly superhero-fit. She’s actually drawn a bit awkwardly, like her costume doesn’t quite fit her. Perhaps that’s reflective of the fact that Barbara’s mind is scattered in so many places. She doesn’t have time to tailor her outfit!

The city backgrounds are also very detailed and homey looking. Filled with coffee shops, book shops, and clothing stores all cobbled together in cozy, colorful street blocks, Burnside looks like DC’s San Francisco. In fact (since I can’t resist the comparison), Wildgoose’s art style is extremely reminiscent of the current BUFFY comics, which happen to be set in San Francisco. Both series make use of a style that’s offbeat, simple and authentic. Wildgoose’s artwork perfectly captures the humanity of Barbara’s story.

Overall, BATGIRL #9 is a joy to read, and a great example of how to tell a story about a normal girl in the comic book medium. There seems to be a lot of influence from series like BUFFY THE VAMPIRE SLAYER, and it’s a perfect model to follow. Hope Larson tells a tale of a young woman who just so happens to be a superhero. The “Son of Penguin” arc has been great for reintroducing this mold into BATGIRL, and I look forward to seeing how the arc plays out. The mystery of Ethan Cobblepot is mildly intriguing, but it’s not what I’m most looking forward to. I’m looking forward to more great interactions, more everyday struggles, and more of Barbara just being Barbara. That’s what makes this comic special.