Batgirl is back in Burnside! After traveling abroad throughout her first Rebirth story arc, it’s time for Babs to settle into her old routines in BATGIRL #7. That’s her intent, at least. The first arc was an exciting romp through Asia, and it clicked perfectly with Batgirl’s personality. Writer Hope Larson and artist Rafael Albuquerque both did a phenomenal job. As sad as I was to say goodbye to that arc, I was excited to see Batgirl back on her home turf, with all her old allies, friends, and foes. Instead, we return to a completely different Burnside. It’ll be interesting to see how Batgirl will adjust to her changed home, one new resident in particular!

READ: Missed BATGIRL #6? Catch up with our review here!

Last time, in BATGIRL #6, we were treated to a short story of Batgirl’s plane ride home. The trip was a bit bumpier than most, with a surprise appearance from Poison Ivy and a homicidal plant. It wasn’t what it sounds like, I promise. Ivy didn’t actually know the plant was dangerous this time, she even helps Batgirl defeat it and save the plane. Hooray for character growth! Pun fully intended. When the plane landed Babs met up with her friend and left, but our view shifted to a mysterious figure in the background: E. Cobblepot! We learn more about this enigma in BATGIRL #7, but questions remain. 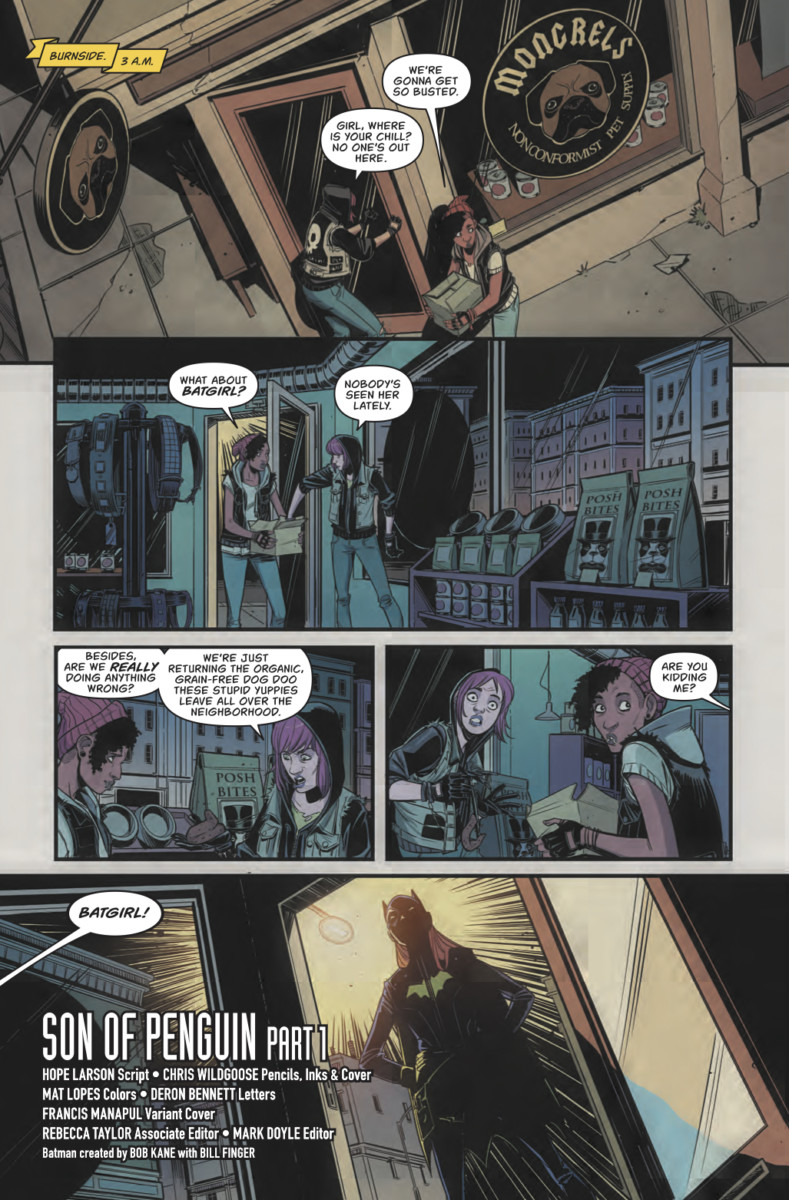 BATGIRL #7 opens with Batgirl busting up a break-in at what she thought was her favorite coffee shop, but ends up being a brand new pet store. Babs is more concerned with this change than the crime since the “burglars” are actually just “returning” some of the organic dog poo that’s being left around the neighborhood. Here we get the first hint of the issue’s theme. It seems that while Barbara was gone, her home succumbed to a force that even Batgirl is powerless to fight: gentrification. While it’s great to see comics tackling issues like this, it threw me for a bit. How long has Batgirl been gone? It seemed to me like it couldn’t have been more than a few weeks, maybe a month at most. That’s not the time frame gentrification happens in; it’s typically a much slower process. It confused me how there seems to have been this radical change in such a short time. 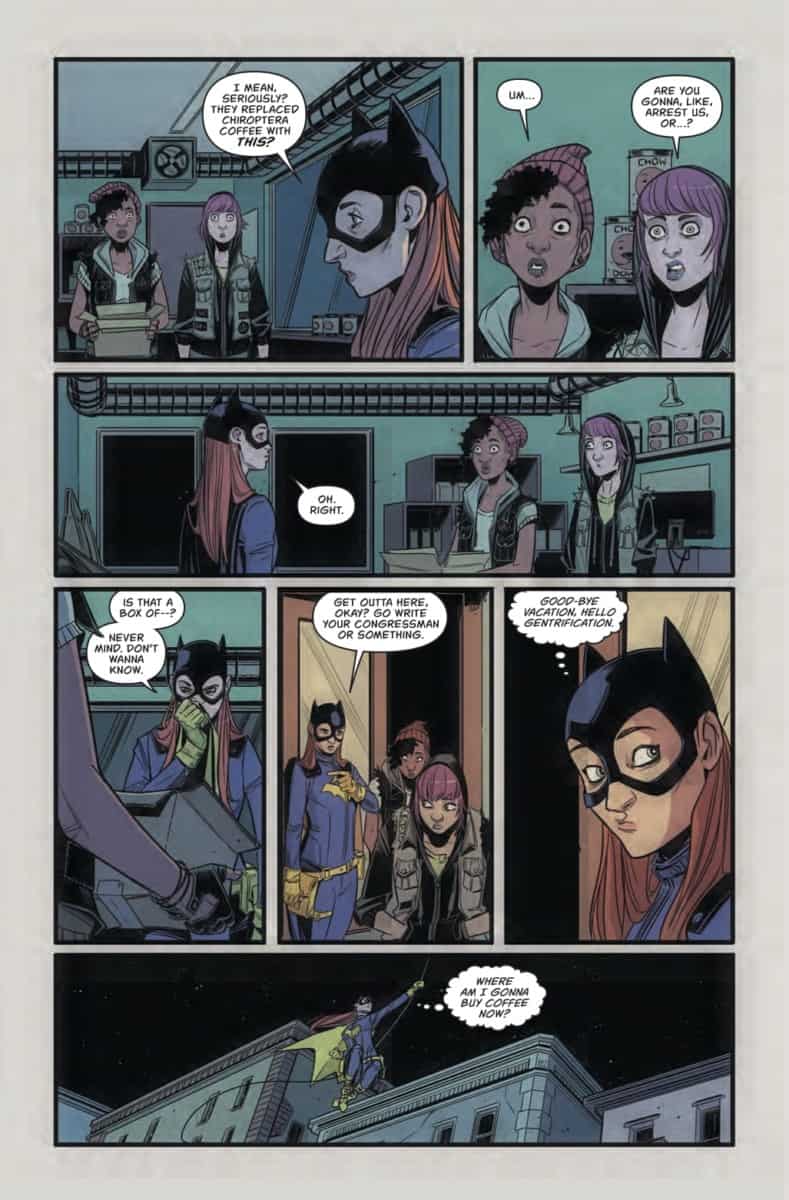 Regardless, the theme of a changing home fits in with Batgirl’s current introspection. That was, after all, the goal of her voyage abroad. The idea of leaving to explore and returning to find everything is different mirrors the internal trajectory of a journey of self-discovery. It’s also great to see Babs, who clearly believes in protecting those in need, angered by gentrification. It’s a different kind of threat, and one she can’t really fight, but her reaction to it is totally in character.

Another decision that initially threw me, but I came to appreciate, was Barbara’s new career choice. Genius, tech company founder Barbara Gordon has decided to become… a librarian. At first, this seemed like a bit of a strange shift, but after hearing her reasons I feel like it’s a choice the character would make. I also liked it as a nod to older BATGIRL comics.

READ: Catch up on BATGIRL’s sister series, BATGIRL AND THE BIRDS OF PREY, with our review here!

Later, Barbara attends a fundraiser sponsored by her company, where a handsome man overhears her tirade against gentrification. He approaches her afterward, impressed by what she’s said. They talk about their respective tech companies and plan a date, but when he hands Babs his business card, his identity is revealed: Ethan Cobblepot, the titular Son of Penguin! Babs must decide whether he can be trusted, and if she still wants to go on a date with him! 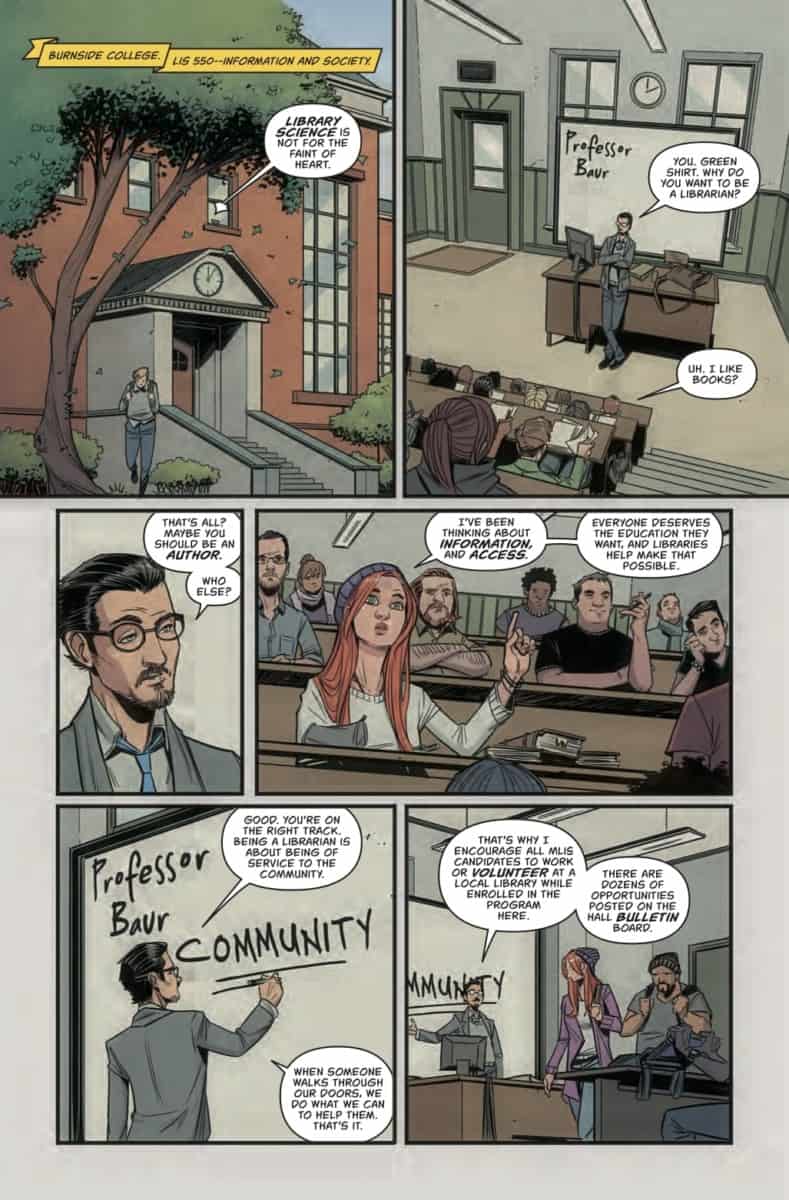 I say the man’s identity is revealed because honestly, I wouldn’t have been able to recognize him based on art alone. Between this issue and the last, the artist changed to Chris Wildgoose, and his art style is very different from his predecessor’s. Previous issues had a vibrant color scheme and an overall loose and fun feel to the art that meshed really well with Larson’s characterization of Batgirl. Wildgoose’s style feels a bit stricter, and maybe a little bit more detailed. While it’s by no means bad (Though I did notice a few panels where it’s intended to be raining, but there’s no rain in sight), I personally enjoyed the previous art more. That matter of opinion aside, it’s unquestionable that the styles are different, and nowhere is this clearer than in the depiction of Ethan Cobblepot. In BATGIRL #6, Ethan had some, admittedly minimal, resemblance to his father. His face shape was very reminiscent of the Penguin, especially his eyebrows and nose. It wasn’t much, but it was enough that you had no trouble believing that, despite everything else about the two being different, they were related. BATGIRL #7’s Ethan looks like your average hip young man, with little resemblance to either his father or the previous version of himself.

All in all, BATGIRL #7 was an intriguing start to a new story arc, but not my favorite issue in the series. There are some strong themes present, and it would be great to see them explored. I have full confidence that Wildgoose will eventually hit his stride. I’m excited for what the next issues will hold!