BATGIRL #6 is the epilogue of the “Beyond Burnside” arc, whose main plot ended in BATGIRL #5. The issue reads as a fun standalone story, featuring frequent Batman foe Poison Ivy and one angry plant. Despite its detachment from the rest of the “Beyond Burnside” arc, BATGIRL #6 feels like the end of a trip, the superhero equivalent of a bumpy flight home. I’m sad to say goodbye to “Beyond Burnside,” since it’s done a fantastic job of showcasing both Batgirl and Barbara Gordon. It’s been great following Barbara’s journey through Asia. As much as I’ll miss this arc, the surprise appearance at the end made me more than ready for the next one.

READ: Need more Batgirl? Take a look at our review of BATGIRL AND THE BIRDS OF PREY REBIRTH #1!

Back in BATGIRL #5, Babs came face to face with the Teacher, the mastermind behind the attacks on her friend Kai. Unbeknownst to Barbara, Kai was carrying bio-encrypted bacteria containing the formula for an experimental intelligence-enhancing drug. Teacher and her students wanted the drug in order to pass the national college entrance exams, believing that their whole lives were determined by these tests. The drug was dangerous and illegal, leaving Batgirl no choice but to stop Teacher’s plot. Teacher took the only batch of the drug before Babs could destroy it, and became even smarter than Batgirl, an eidetic memory wielding super genius. Through Fruit Bat’s advice, Batgirl managed to defeat Teacher. With her adventures in Asia wrapped up neatly, Batgirl was ready for a smooth flight home. Of course, as a superhero, that was never going to happen. 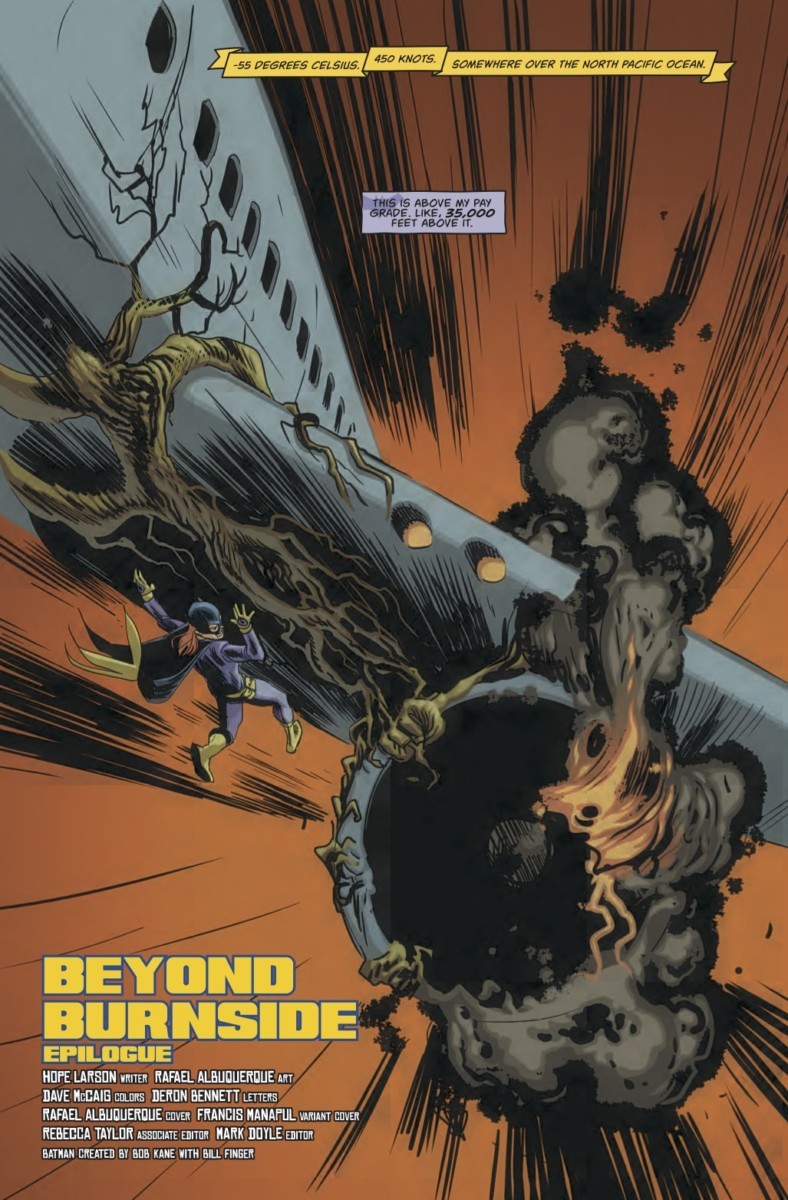 BATGIRL #6 picks up in the middle of Barbara’s flight home. There’s a sudden burst of turbulence, followed by a bizarre smell. After a quick investigation, Barbara discovers the root of the problem: a large, prehistoric plant sitting in the cargo hold. The plant, of course, belongs to Poison Ivy, who soon appears beside Batgirl. Despite Ivy’s usual role as a villain, neither she nor Batgirl seems to be looking for a fight. The plant, on the other hand, definitely is. It attacks Batgirl before ripping the plane door off. In order to save herself and the plane, Ivy teams up with Batgirl in order to stop the plant’s rampage. 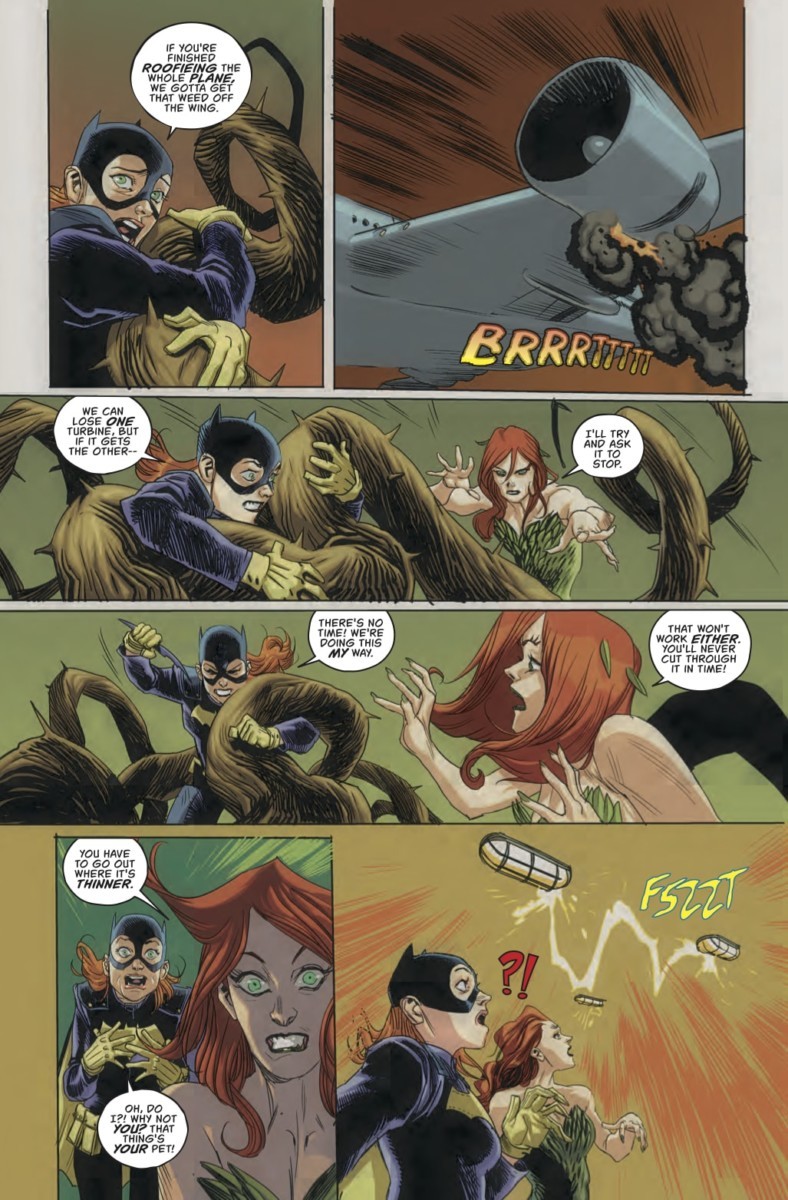 Poison Ivy’s characterization in this issue is fascinating. We see her struggle with the weight of all the lives she’s endangered. While she believes that plant life is as important as human life, a belief most people don’t share, she does acknowledge that the human lives are worth saving. She attempts to balance the life of her one-of-a-kind plant with the lives of everyone on the plane. Often, Poison Ivy is portrayed as completely lacking regard for human life. She kills humans for injuring plants, or for preventing Mother Nature from reclaiming her planet. For that Ivy, the decision should be easy — let the plant crash the plane wherever it wants, as long as it survives. Yet author Hope Larson gives us a more complex Ivy. This Ivy wants to save the plant, but is wracked with guilt over all the lives she’s endangered. She doesn’t disregard human life but elevates plant life to the same level. This forces her to choose: one life or hundreds? Larson’s Ivy is moral; she didn’t intend to destroy anything. She just wanted to save a dying species. The decision clearly pains her, as she feels the need to save people to atone for her mistake. Larson provides us with a deeper Poison Ivy, and it’s a joy to read.

READ: Want more Poison Ivy? Catch her in our review of TRINITY #4!

After the fight, Babs wakes up back in her seat, next to Ivy, wearing civilian clothes. The plane lands safely, and Barbara reconnects with her friend Frankie, telling her about the adventure on the plane. However, a mysterious, young man stands nearby, meeting a chauffeur holding a sign with a very familiar surname on it, a great cliffhanger for the next arc! I have so many questions, and I can’t wait to learn all about him in the next issues. 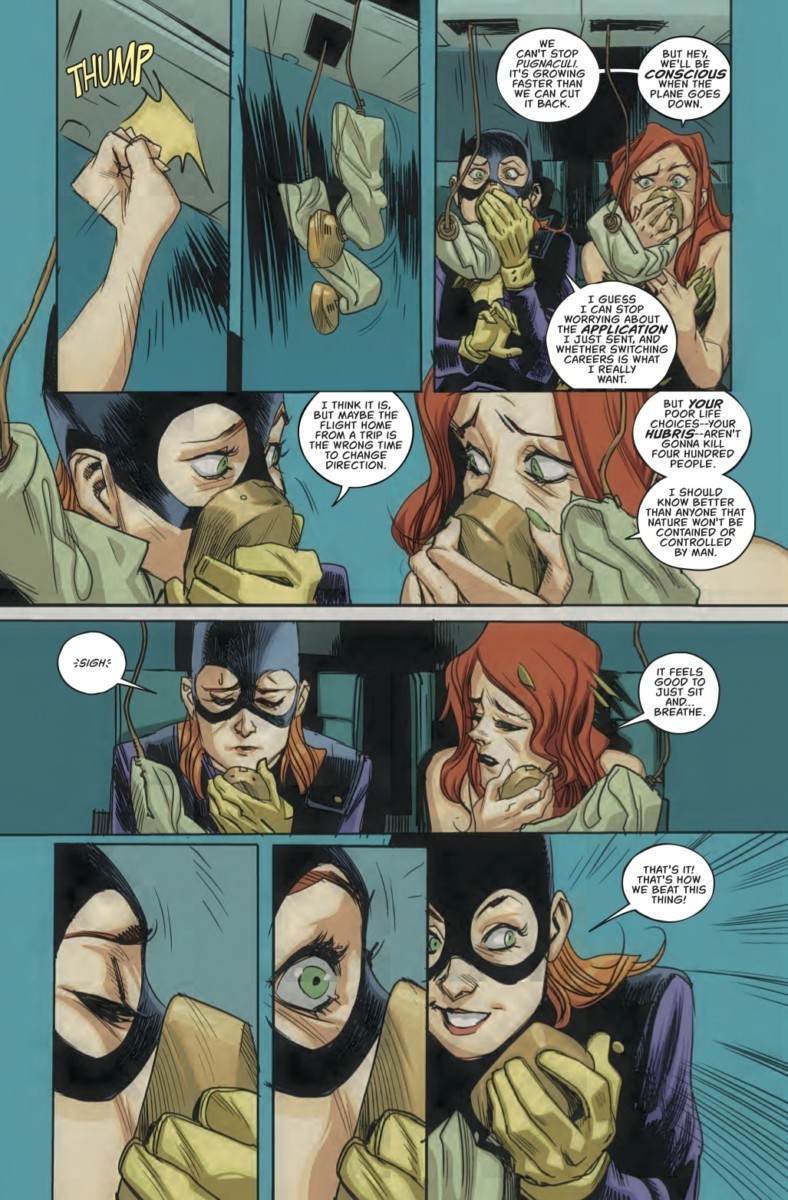 The art in BATGIRL #6 is as phenomenal as it has been for the rest of the series. Artists Rafael Albuquerque and Dave McCaig have a fun and fresh art style that’s a real treat for readers. Albuquerque’s strong, clean lines along with McCaig’s vibrant colors perfectly match the fun, upbeat story Larson is telling. The faces are especially good; they’re expressive almost to the point of being exaggerated. In the panel above, despite half of her face being covered in a mask, you can clearly see Ivy’s internal turmoil. This expressiveness does a phenomenal job of making the characters feel real — the perfect complement to Larson’s complex characterizations.

Overall, BATGIRL’s creative team has been doing an excellent job, and BATGIRL #6 is no exception. This was the perfect epilogue. It made the trip home, the most boring part of any vacation, exciting and action packed, and it left us some phenomenal questions to chew over while we wait. If Ivy changed her back into her other clothes, does she know Babs is Batgirl? Did our mysterious gentleman overhear Barbara talking to Frankie, revealing her secret identity? Most importantly, exactly who is he? The next issue of BATGIRL can’t come soon enough!