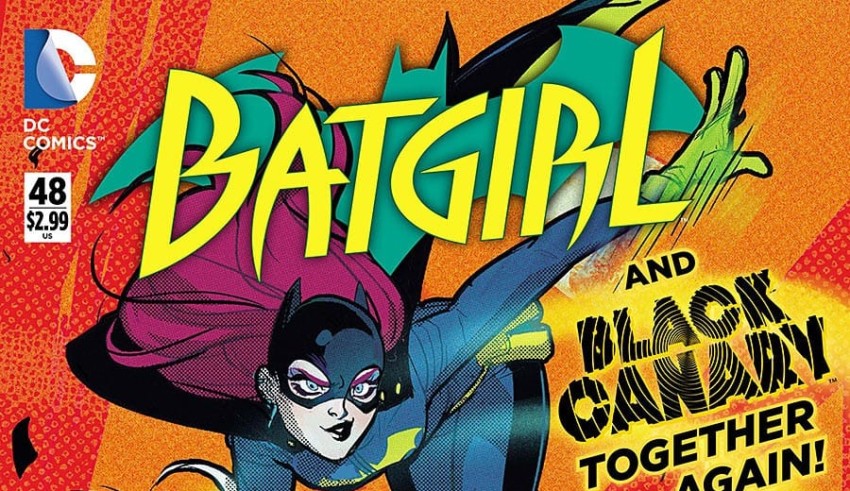 BATGIRL #48 brings two welcome returns to the series, as penciller Babs Tarr returns to the creative team and Black Canary gets cover billing as a guest star. The question is whether Dinah being back in town can be a help to Barbara in figuring out what is wrong with her memory.

The issue opens with Batgirl and Batwing on a date (in costume for reasons I won’t spoil) to celebrate the start of Barbara’s new tech company, a company she was hesitant to launch last issue until the mysterious villain playing with her mind forced a change of heart. The couple is interrupted by a report from Frankie that the videogame-themed holographic-projector-villains (as seen in the eight-page Post-CONVERGENCE BATGIRL preview comic) are staging a robbery. The two heroes quickly dispatch them, but Batgirl is horrified to realize she has no recollection of her previous encounter with the duo. 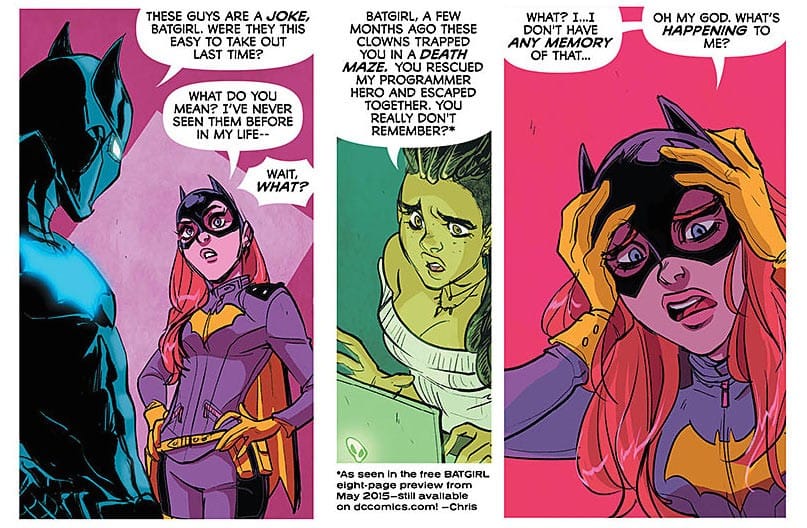 A concerned Barbara and Frankie return to their apartment, only to find Dinah “Black Canary” Lance shaking down Greg (the old friend of Barbara’s whose been staying with her) for going through Barbara’s things.  After he provides an explanation that calms Dinah down, she and Babs hit the streets to find out exactly what’s wrong with the latter’s memory. Eventually, they’re led to the Burnside Hall Of Records where they encounter the being that’s been haunting Barbara’s nightmares, a villain who calls himself Fugue. Batgirl and Black Canary engage, but he’s able to fight them off by messing with Barbara’s mind, leading to a big reveal and cliffhanger at issue’s end.

READ: Missed an issue? Catch up on BATGIRL #47 here!

The forty-eighth issue of BATGIRL is a major bounce-back issue for the series after the previous issue’s letdown. Whereas issue #47 told a disjointed story that seemed to be missing basic information, this issue tells a coherent, interesting story from its opening pages. The plot weaves its way seamlessly through its three major set-pieces at a fantastic pace, while still spending enough time with each to make them interesting. The brawl with the videogame villains is the kind of fun that this book is known for, and while not integral to the plot in itself, that scene does a great job of setting up just how bad Barbara’s memory loss is. The book’s closing scene with Fugue nicely balances establishing the villain outside of Barbara’s nightmares while still keeping his motivations (and possibly identity, depending how one reads a certain panel) mysterious.

From a characterization standpoint, the issue flourishes during its middle scene. It’s great to see Dinah and Barbara together, hanging out and interacting as friends again, especially given everything that’s happened in their lives since Dinah left the cast of BATGIRL to star in the BLACK CANARY solo title. I especially enjoyed Barbara’s glee at Dinah being forced to take selfies with fans of Black Canary while they’re in the midst of attempting to solve the mystery. It was the kind of human touch that this series does so well.

READ: Looking for a new book to read? Check out our review of SPIRAL #1!

The same way I didn’t think it would be fair to blame the deficiencies of issue #47 on Babs Tarr’s absence, I don’t want to give total credit for BATGIRL #48 to her return. However, Tarr’s art lifts up everything else about the book pretty much from the opening page. For example, the fight sequence with the videogame-themed villains could have come off as paint-by-numbers in the hands of another artist, but Tarr imbues it with a sense of palpable energy and design that makes the scene pop off the page. Artistically, this might be my favorite fight Tarr has done during her run. As usual, Tarr also hits a home run with the non-superheroic sections of the book, especially the scenes between Dinah and Barbara.

BATGIRL #48 is a definite comeback after last month’s spotty issue, and I would definitely recommend it to anyone who’s a fan of the Burnside take on the character, or is simply a fan of comic book art that’s different from the Big Two norm.