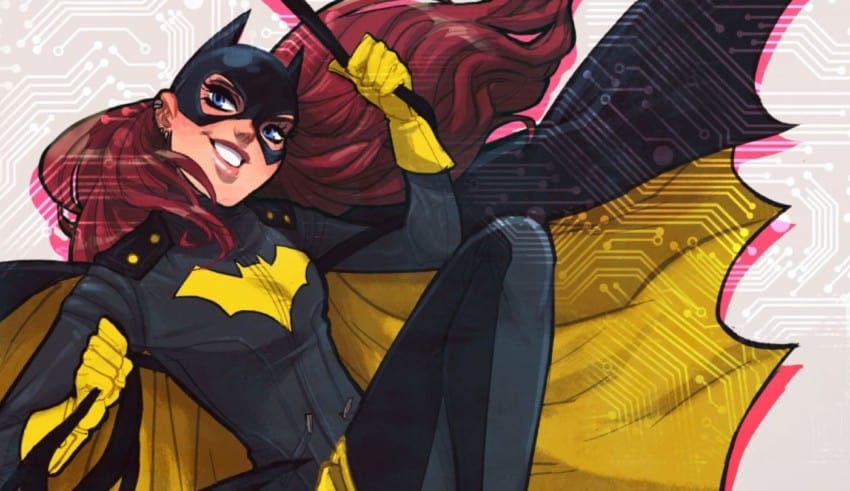 BATGIRL #46 gives fans a team-up they’ve been waiting years for, as the superheroic identities of Barbara Gordon and Stephanie Brown finally cross paths. 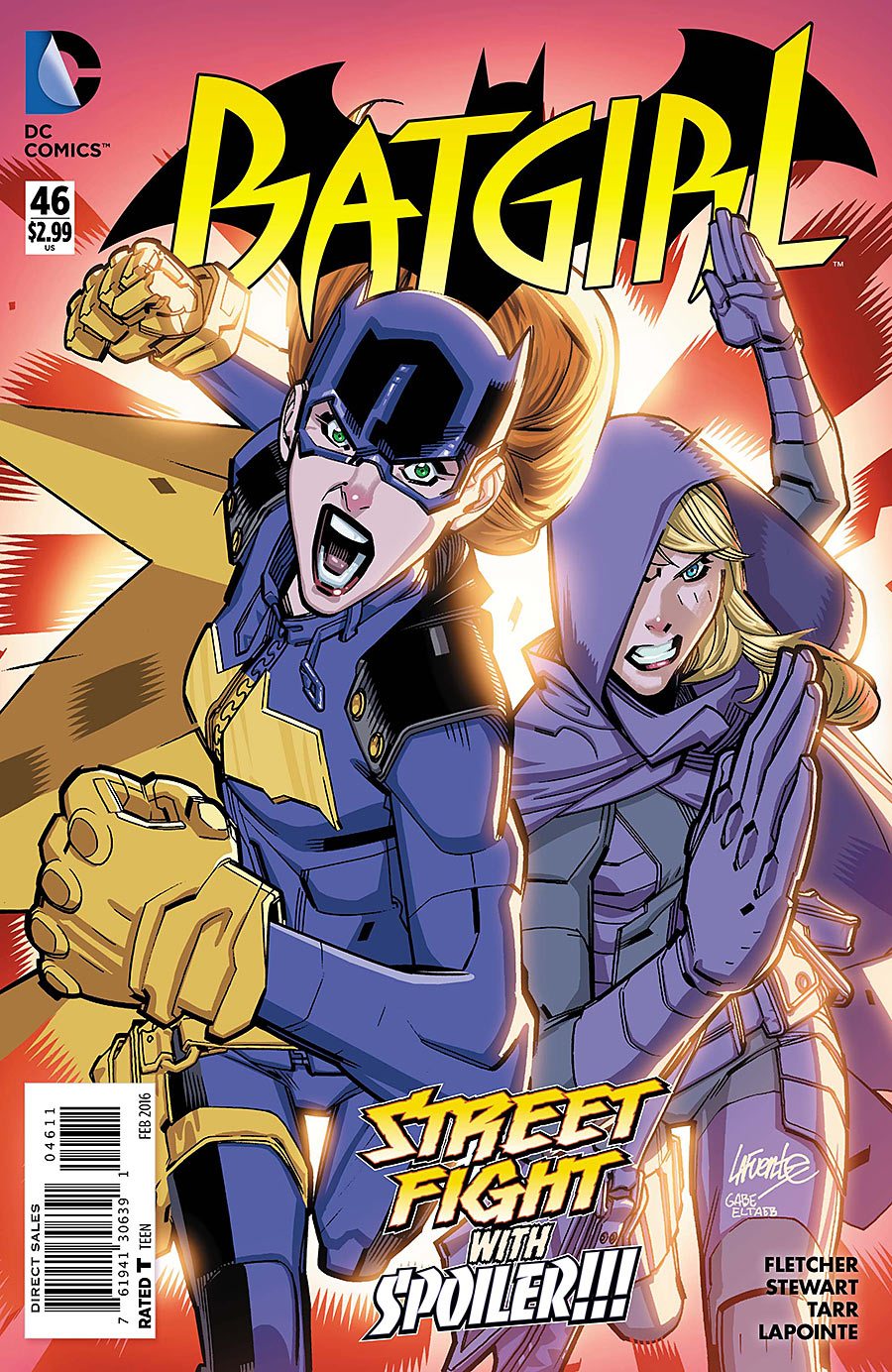 The forty-sixth issue of BATGIRL picks up some time after the previous issue though one would assume not too long since a line of dialogue establishes that  Alysia and Jo are still on their honeymoon. Barbara and Nadimah are working on their oft-mentioned grad crime-mapping of Burnside project for Grad School by going door to door and asking residents about heightened gang activity in the neighborhood. An older woman confesses to the two that her son has joined one of the gangs, shaking the two. Later, Barbara admits to Nadimah that she’s been having trouble sleeping due to nightmares, to which Nadimah tells her to take a few days and get some rest. 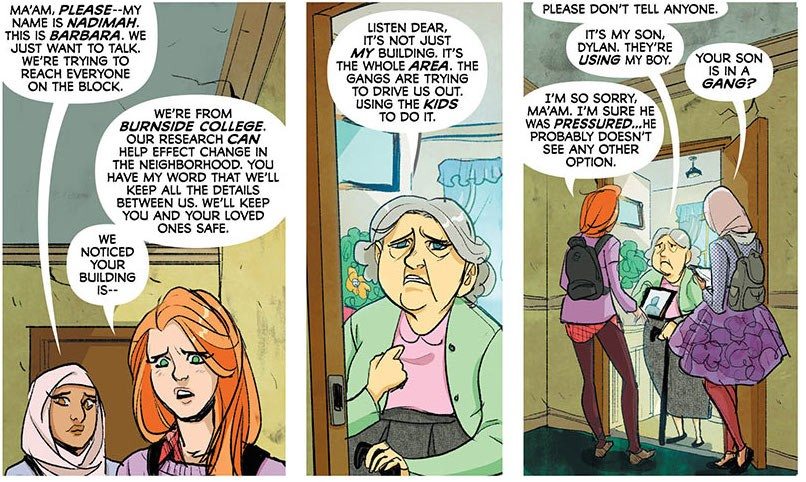 Ignoring Nadimah’s advice, Barbara dons her Batgirl guise that night and heads back to the same area the two were in earlier. She tracks down the gang that she and Nadimah’s interview subject’s son was a part of and scares him off by name-dropping his mother. The rest of the gang don’t take too kindly to her actions, and a huge brawl ensues. During the fight, Batgirl is suddenly joined by a mysterious man who helps her in neutralizing the gang. Identifying himself only as Lewis, he says he has information to give her but that their location is unsafe. He instead offers to meet Batgirl the following night, which she accepts.

The next day Barbara is awoken by Frankie, having slept for over twelve hours. Frankie straightforwardly shows Barbara the neural implant in her neck and confesses that it was she who remotely took control of the Batcyle to help Batgirl defeat Velvet Tiger (in BATGIRL #44). Initially, Barbara is angry with her, but after Frankie shoots her down by saying she’s making the same choice Barbara did years ago, the two agree to take their crime-fighting partnership to the next level.

READ: Behind on BATGIRL? Check out our Issue #45 review here!

Batgirl, along with the FrankieCycle (which is what I will be referring to Frankie as in superheroic situations until the title gives her an actual codename) goes to the meeting with Lewis, where he explains to her that Spoiler is on the run from the Hasegawa crime family and that Eiko Hasegawa, the head of the family and friend of Spoiler who would call off the hit, is nowhere to be found. Batgirl agrees to help and sets off to track Spoiler using the tracker she gave her the last time the two encountered each other (in the BATGIRL ANNUAL).

Batgirl finds Spoiler engaged in a fight with several Hasegawa soldiers, including a masked tri-blade wielding assassin. The two are able to fight them off, and they vow to leave Spoiler alone when Batgirl threatens to involve Batman. Not content to take their word for it, Barbara hides Stephanie at an apartment/safe house owned by her boyfriend, Luke Fox. Speaking of Luke, we later see him and Barbara on a date where she details the nightmares that she discussed with Nadimah earlier, and we realize that they’re not nightmares at all but rather tied to the mysterious figure who was standing over Barbara’s bed at the end of issue #45. The issue then ends with a bit of a twist that ties back to the start of the story that I won’t spoil here, but suffice to say it opens up some new problems for Barbara coming up. 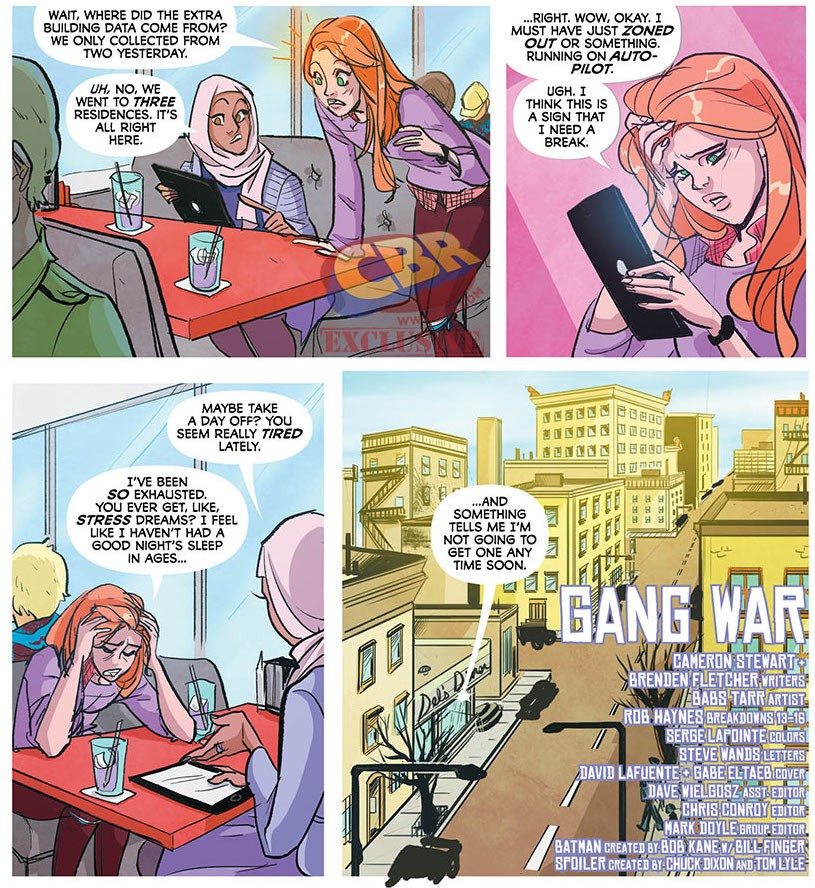 I’ll admit that I’m having a harder time than usual formulating exactly what I think of BATGIRL #46. The issue sets up several upcoming storylines. In quick succession, we establish the gang problem, how Barbara’s civilian role in studying it brings her Batgirl persona into it, the involvement of Spoiler of the Hasegawas, and the issues ending twist. On top of that, there’s Frankie’s reveal to Barbara, plus the nightmares that we as readers know aren’t nightmares at all. For the most part, these plots balance well together, and the book doesn’t feel too overpacked. However, something like the Barbara/Frankie storyline deserved more than the two pages it got. While I appreciated the fact that Babs quickly realized that Frankie wasn’t going to be deterred, I thought their conversation about the neural implant could have gone a bit longer. The same could be said for the heavily hyped team up with Spoiler. Granted the fight scenes were well done, but we barely got any interaction between Stephanie and Barbara, either in or outside of costume.

READ: A fan of DC’s young heroes? Check out the GOTHAM ACADEMY entry in our “Why I Love” series!

From a characterization standpoint, the issue is pretty strong when it comes to the regulars. Stewart and Fletcher have perfected their version of Barbara Gordon at this point, and everything the character does is perfectly in line with what she’s done before. Frankie and Nadimah also get some good character moments, though both appear very briefly. There is a misstep in guest characterization, however, as Stephanie Brown/Spoiler doesn’t read like herself. Her dialogue is surprisingly on the bland side, both in and out of costume. I also thought that the book didn’t take advantage of just how different Barbara and Stephanie truly are as characters though I suppose that could be something they’re saving for future issues if Steph is going to be hanging around for a while (which her living in Luke Fox’s safe house at least implies). 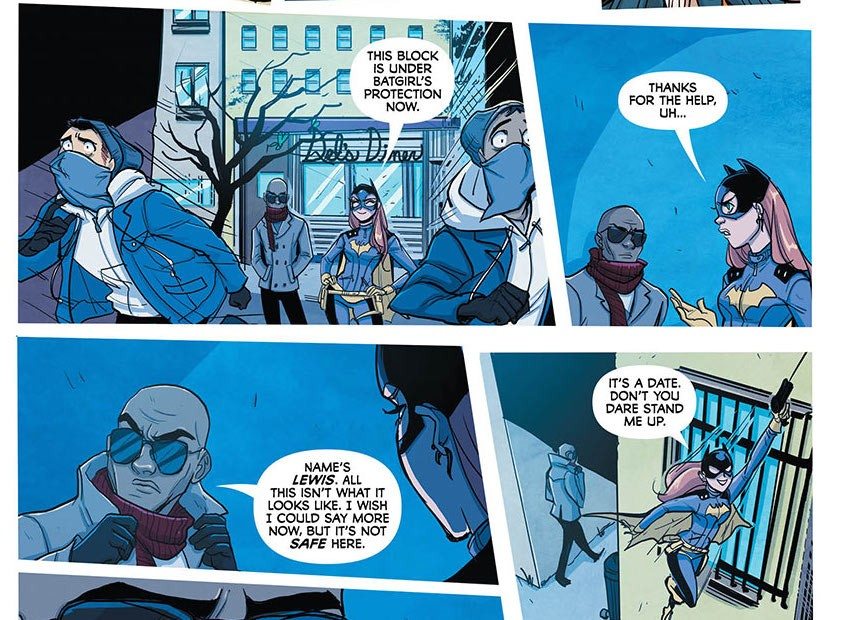 As usual, Babs Tarr’s artwork is a highlight. I particularly enjoyed the design of the masked Mokugeki assassin who I hope to see again in the future.

BATGIRL #46 is not the Batgirl/Spoiler crossover that the cover suggests, and anyone who goes in expecting that will be disappointed. However, it is another strong, if a bit overpacked, issue of the series that fans of the Batgirl of Burnside characterization will enjoy.