GOTHAM essentially plays jump rope with Batman canon. From revamped origins for villains such as Poison Ivy and Mr.Freeze to the slow burn theatrics of Penguin. Love it or hate it GOTHAM surely gives us something new to consider. GOTHAM messed with our perceptions of some of these classic characters. The creators of the show definitely took their liberties with a substantial chunk of Gotham lore. The transformation of Barbara Kean changes drastically. Her spin on the character has taken a traditional, blasé individual and given her the kind of unpredictable persona that is reminiscent of one Harley Quinn. 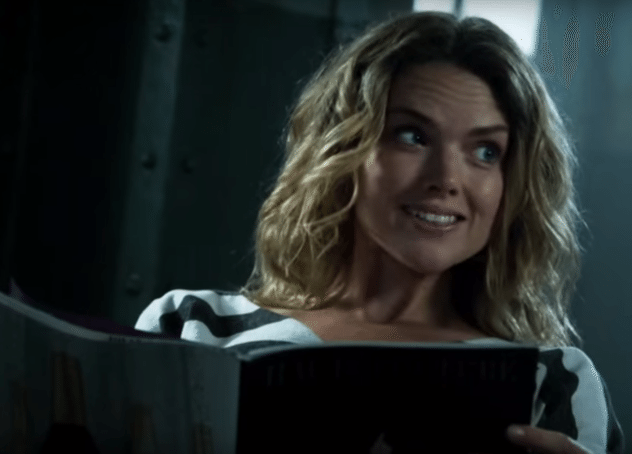 The first season well-documents Barbara Kean’s descent into madness. Barbara starts off as the expected image of her comic book counterpart. She owns an art gallery and hails from a well to do family. She steadily supports her boyfriend and future fiancé Detective Jim Gordon. As Gordon struggles with his own personal demons, she serves as a grounding force, separating the man from his vices. However, over time their relationship grows mired with doubts and moral complications that come hand in hand in Gotham City.

Questioning whether Gordon did kill Cobblepot, Barbara Kean’s perception of her fiancé as well as distinguishing right from wrong slowly chips away. After her kidnapping by Butch, paralyzed with fear by Zsasz, and unable to bargain with Carmine Falcone, she leaves, unable to bear the burdens and demons of Gotham. Upon her return, she finds that Jim has moved on with a Dr. Leslie Thompkins and is confronted by the Ogre. The season crescendos into a grand confrontation between Barbara, her parents, and the Ogre, who manipulates her into choosing which parent he should kill. In a final twist, we are left with the deaths of Mr. and Mrs. Kean, the perpetrator revealed to be Barbara Kean herself. She confesses her crime to Dr. Thompkins only to unleash a vicious attack before she is taken away to Arkham Asylum.

Harley Quinn and Barbara Kean Both Have Television Origins

For anyone familiar with Dr. Harleen Quinzel (AKA Harley Quinn), Harley first appeared as the Joker’s protogé in BATMAN: THE ANIMATED SERIES. An immediate fan favorite, her origin story fleshed out in the one-shot comic ‘Mad Love’ before an adaptation as an episode of the series. Dr. Quinzel once established herself as a psychologist at Arkham Asylum, but Joker seduced her. Harley Quinn’s origins stem from a blurred sense of right and wrong, having some sort of tragedy or pain spur her descent into mania.

READ: What We Hope to See in the Harley Quinn Spin-Off

What About the Comics?

The same can be argued for Ms. Kean. Barbara’s breaking point was when she was confronted with her parents. An accumulation of events amplified Barbara Kean’s negative thoughts of them, thus ultimately justifying their execution. For Dr. Quinzel, it is in ‘Mad Love’ in which we see how witnessing her beloved stripped of his life pursuit by Batman to make people laugh. Any distaste or wrong-doing on the Joker’s part must, of course, stem from those who impede on his noble desires. Whether it be the father who supposedly abused him, the people who shunned him, or the Batman who continuously demolishes him.

In Harleen’s eyes, it was ‘them’ who are at fault for his crimes, for how could he the man she loves help being who society shaped him to be. This realization was solidified when the Doctor found the Joker bloodied, battered and bruised by Batman. Ultimately it transformed her from Dr. Harleen Quinzel to Harley Quinn. 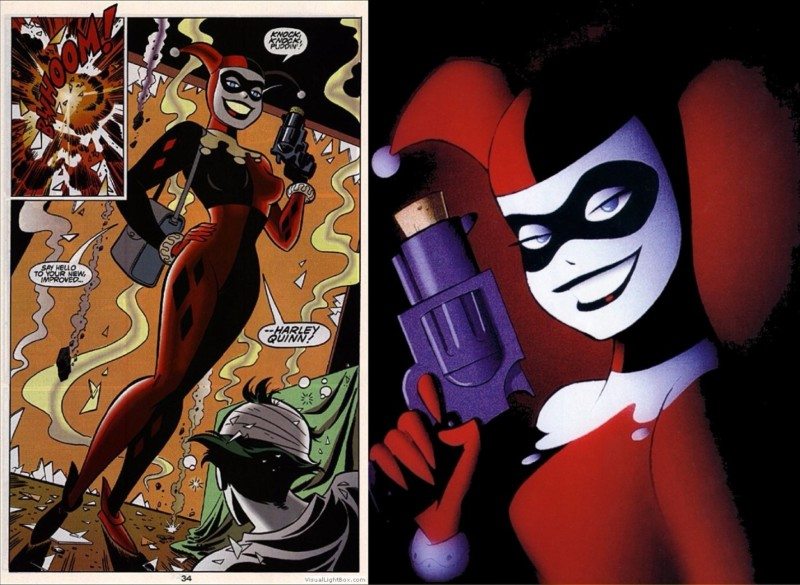 The origins of both Harley Quinn and Gotham’s Barbara Kean run somewhat parallel one another. A series of events blurred their view or right and wrong, and ultimately they reached their breaking point. They reached an acceptance of anarchy and absurdity reconciled with morality.The main difference lies the in the circumstance, the logistics behind what drove them insane and the type of relationship they had with the people around them.

Furthermore, we must acknowledge the overall demeanor of the character. A lot of what Barbara Kean does is very Harley Quinn-esque. In the second season, Barbara continuously manages to interfere and toy with Jim Gordon and his relationship. She accuses Dr. Thompkins of attacking her, only to actively threaten the doctor not five minutes later. She is busted out of Arkham and begins going on a killing spree with the rest of the escapees, only to escape their gang herself and follow her own agenda. Her master plan involved kidnapping Gordon and Leslie in the hopes of marrying Gordon in front of his current fiancé. Barbara is the epicenter of calculated madness in the world of GOTHAM. Whilst other villains such as Penguin deal with the large-scale schemes of dominating the underworld, Barbara maintains the illusion or reality of serving her own pursuits- with one notable weakness.

The joke is, we cannot tell whether to take her seriously or dismiss her actions as that of a mad woman. Harley Quinn has a similar conundrum. Few can say with complete certainty whether Harley is evil for the sake of villainy. If anything she is simply Harley Quinn as the manic extraordinaire. The Harley with an affinity to commit criminal acts when it suits her agenda. She commits crimes when it proves a point, satisfies her needs, or serves the Joker. Yet, simultaneously she holds no consistent reasoning behind any of her behaviors. In BATMAN: THE ANIMATED SERIES, there is one episode entitled ‘The Trial.’

In this episode, the villains of GOTHAM put Batman on trial for making them the bad guys they had become. When Harley is called to the stand she continues on about her loyalty and love of the Joker, and yet she turns on him instantly when she finds out he strengthened her case in order to get released earlier. This exhibits Harley’s inherently selfish nature. She is unpredictable, the voices in her head and her priorities shift regularly, often to comedic effect. Barbara, though not necessarily identical in this quality, does to some degree highlight this trait.

She is consistently in pursuit of Jim Gordon. She is convinced that they are meant to be together and the only ones capable of understanding and accepting both the dark and the light within one another. Though she does not try to force him to be with her, rather, her priorities more align with what is attainable and what would satisfy her at this moment. Her club, money, power, Tabitha Galavan, perhaps, these are obtainable, and for now satisfactory. With Kean, that can always change, and when it does, she’ll change her methods and get what she wants.

Barbara, although more at ease, reminds us of Harley in terms of orchestrating her sanity to accomplish her own goals and possessing some of the same characteristics. Kean possesses a similar, perhaps more manipulative mania about her.  Additionally, this further exemplifies the intellect these women possess.

Smarter than the Average Villainess?

Harley is perhaps one of the most competent villainesses out there. If not for her own hindrances and her soft spot for the Joker. Referring back to ‘Mad Love’ Batman himself says so. He states she came closer than anyone else to actually ending him, He then goes on and tells her if not for her desire to appease the Joker, the Bat would have no means of escape from her perilous plot. Similarly, Barbara Kean is obviously smart, however, her pursuits are usually dismissed, her psychosis overlooked. In the current third season of GOTHAM, a mental health clearance deems Barbara sane. She has also been released from Arkham Asylum. She now runs a club called ‘The Sirens’ (a nod to the infamous Gotham City Sirens).

Since her release, Barbara leads a simple life (as simple as one can have in Gotham City). She lives a life free of villainy. Though never actively doing anything particularly criminal, throughout the season she has been in the periphery of various iniquitous activities. However, in the mid-season finale, she seems to have begun playing Oswald Cobblepot and Edward Nygma against one another. Employing her feminine wiles and chaotic nature, she sets forth a plan to divide GOTHAM. Her plan pits the two against one another with the intent to cause an all-out crime war. This leaves her with an opportunity for a power grab to come out on top. Her cunning nature, the willingness to cause chaos to fulfill her own desires or simply for the sake of chaos thematically seems to surround both Barbara and Harley Quinn. Truly these two women must be mad geniuses.

Read: Why I Love Barbara Gordon

There are numerous connections one can make between the two characters. While they both exist independent of one another, a case can be made GOTHAM’s Harley Quinn inspired Barbara Kean. Her origins, characteristics, and overall intelligence is reminiscent of the iconic anti-hero. In the sense that they both have their grand downfall, share similar behavioral patterns, and possess the right kind of smarts to accomplish their goals.

Her love-struck tendencies seem to motivate Harley while Barbara keeps hers in the periphery, they both have an appreciation and lust for anarchy. A strong point in the show is perhaps how well the creators execute the art of subtlety. The show does not directly adapt their characters, rather, they embed an array of traits and allusions that connect us to Batman lore. This is particularly effective when exploring the origins of various villains. It helps us understand criminals like the Joker without actual confrontation with them. Jerome personifies what the Joker could be, the why behind his character without tying us down to the statistics that make the villain. This opens up a world of potential moves a story and character can play.

We can all form our own opinions on how we feel about the show and the liberties it has taken. Additionally, we cannot help but appreciate the allusions to some of our favorite characters.