At ComicsVerse, we think comics are a great platform to break the mold of stereotypes. If you disagree, I’d like to introduce you to Ms. Shabash: a Bangladeshi superhero who fights skin-tone discrimination, gender bias, and slut-shaming.

Ms. Shabash is the alternate-universe version of Shabash, Bangladesh’s atomic mango-powered superhero, created by Mighty Punch Studios. Her character was inspired by the Adventure Time episode “Fionna and Cake,” which introduces gender-swapped versions of the main characters of the show. Much like Clark Kent, she leads a double life of a journalist named Shabnam and a superhero. Debuting on International Women’s Day, March 8th, 2015, MS. SHABASH #1 has garnered praise from fans and news outlets for challenging the norm and breaking stereotypes in Bangladesh.

READ: Our Round Table About Asian Representation in Western Media!

I first found out about Ms. Shabash from a video posted by media company Scroll, and as a Bangladeshi girl, I was absolutely thrilled. I contacted Mighty Punch Studios on Facebook immediately expressing my interest in reading Ms. Shabash, and they were kind enough to have their comics delivered to my dad’s house in Bangladesh. My dad gave them to me when he came to visit me in New York, and I became a huge fan of Mighty Punch Studios, especially Ms. Shabash. 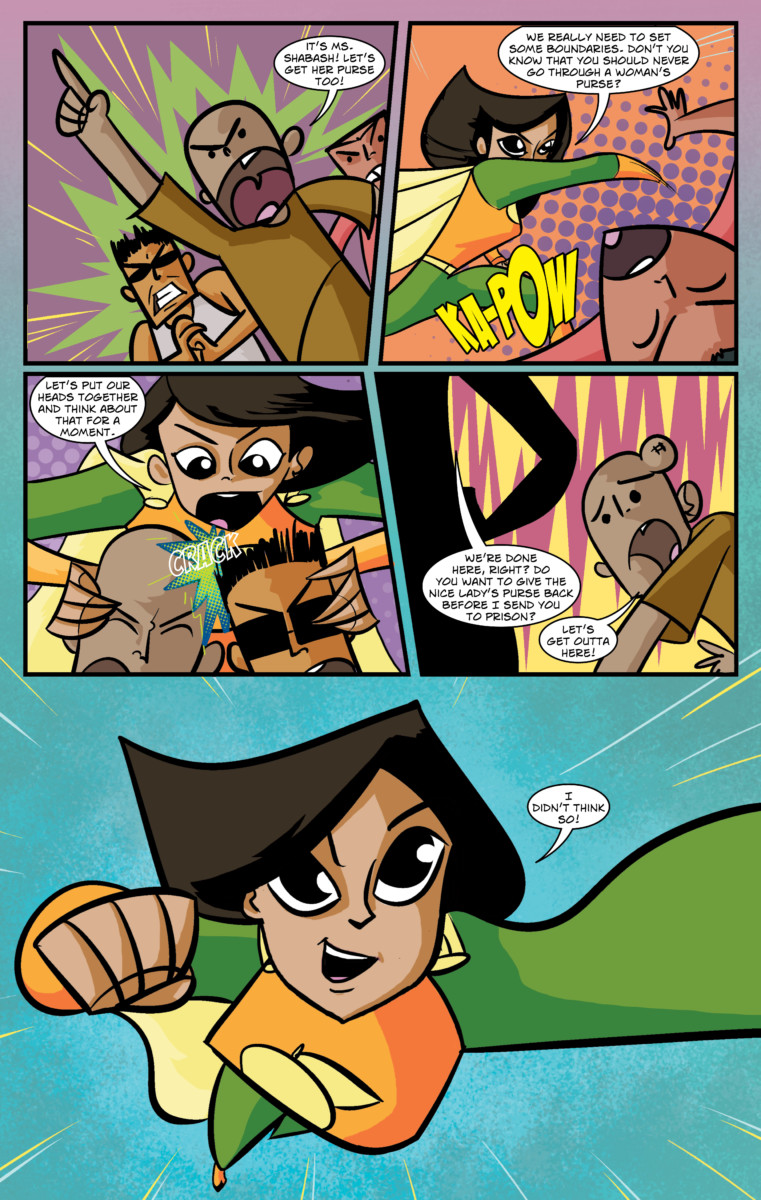 MS. SHABASH #1 is funny and action-packed with cool artwork by Fahim Anzoom Rumman, Mosharraf Hussain, and Shamim Ahmed. The panels are bold and vibrant, and the facial expressions of the characters add to the humor of the comic. However, it’s much more than mere entertainment. It is high art, and it boosted my self-esteem level with only one installment. Ms. Shabash has made it to the top of my list of favorite badass women, right next to Ms. Marvel.

READ: Did you know I wrote an open letter to Ms. Marvel about my experience of growing up as a Muslim woman of color? Take a look!

The Future is Female

Although Ms. Shabash is the female version of Shabash, they are not the same. While Shabash is lazy and needs to be pushed, Ms. Shabash is proactive and determined to save the day. Writer Samir Rahman states on the introductory page of this comic that he did not want to imply that one gender is better than the other, and this is simply how he likes to write his characters. However, it’s inspiring to see that women can be leaders in a patriarchal society and, in some cases, even better leaders than men.

Moreover, Ms. Shabash is nothing like the quintessential South Asian woman who is expected to accept a marriage proposal from a stranger once they reach the “marriageable age” and take care of her husband and children. Although it’s the 21st century, some still assume that South Asian women do not belong in the workforce as their primary job is to cook in the kitchen. Ms. Shabash, however, doesn’t care about gender norms. When a lady comes to Ms. Shabash with a marriage proposal, she respectfully rejects the proposal, stating that she needs to get back to her day job. This is truly an embodiment of the fact that women can only be one thing – whoever they want to be.

READ: What Female Protagonists should not be doing? Take a look at our article to find out! 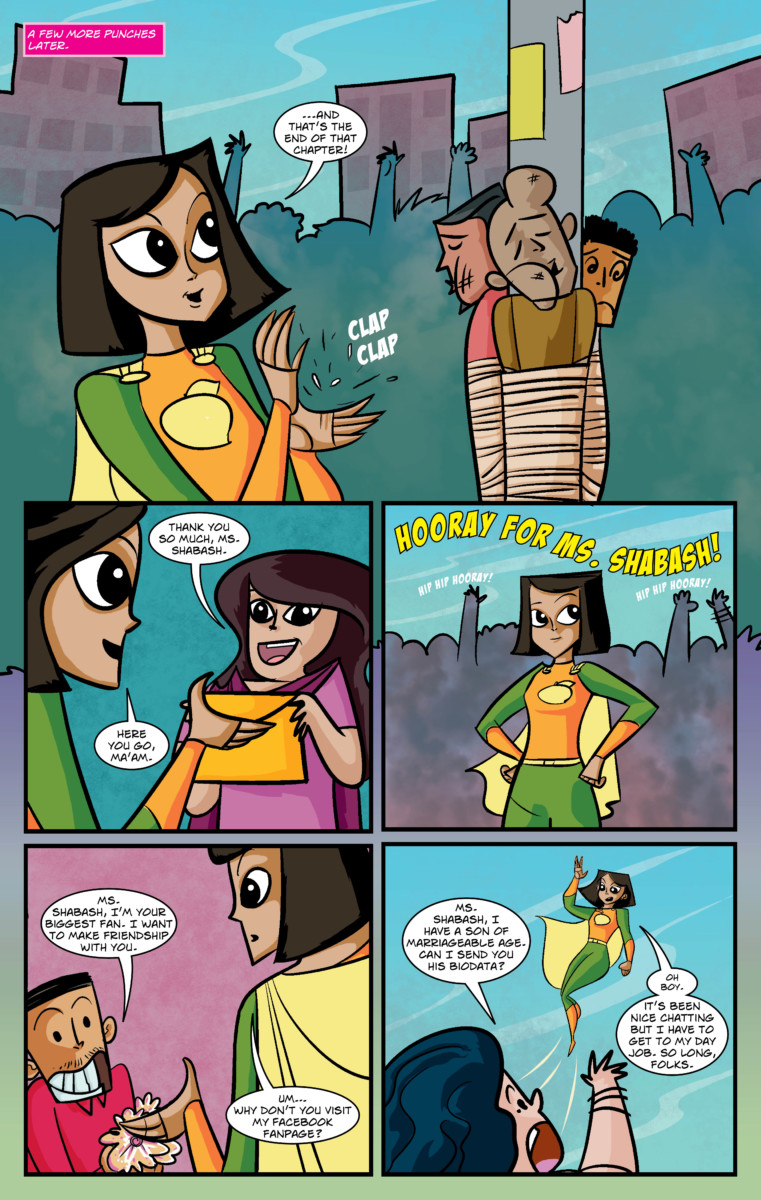 Confidence Comes from Within

Asian countries such as Bangladesh, India, Pakistan and even Korea and Thailand are known to condemn dark skin. Having a light skin complexion is synonymous with being beautiful and wealthy, which is why the whitening cream industry in these countries has always thrived. There have been recent campaigns such as “#UnfairandLovely” to address this issue, and Rahman also does a great job in utilizing MS. SHABASH as a platform to shut down stigma against dark skin.

In “The Whitewash Factor” story arc, our villain is Ms. Porcha, the CEO of a thriving cosmetics company called Whitewash. Whitewash has been highly successful in persuading consumers to buy their products using emotional appeals in their advertisements. In addition, the whitening cream has an element called Chemical W, which causes overwhelming feelings of inferiority and doesn’t go away until more Whitewash is consumed. 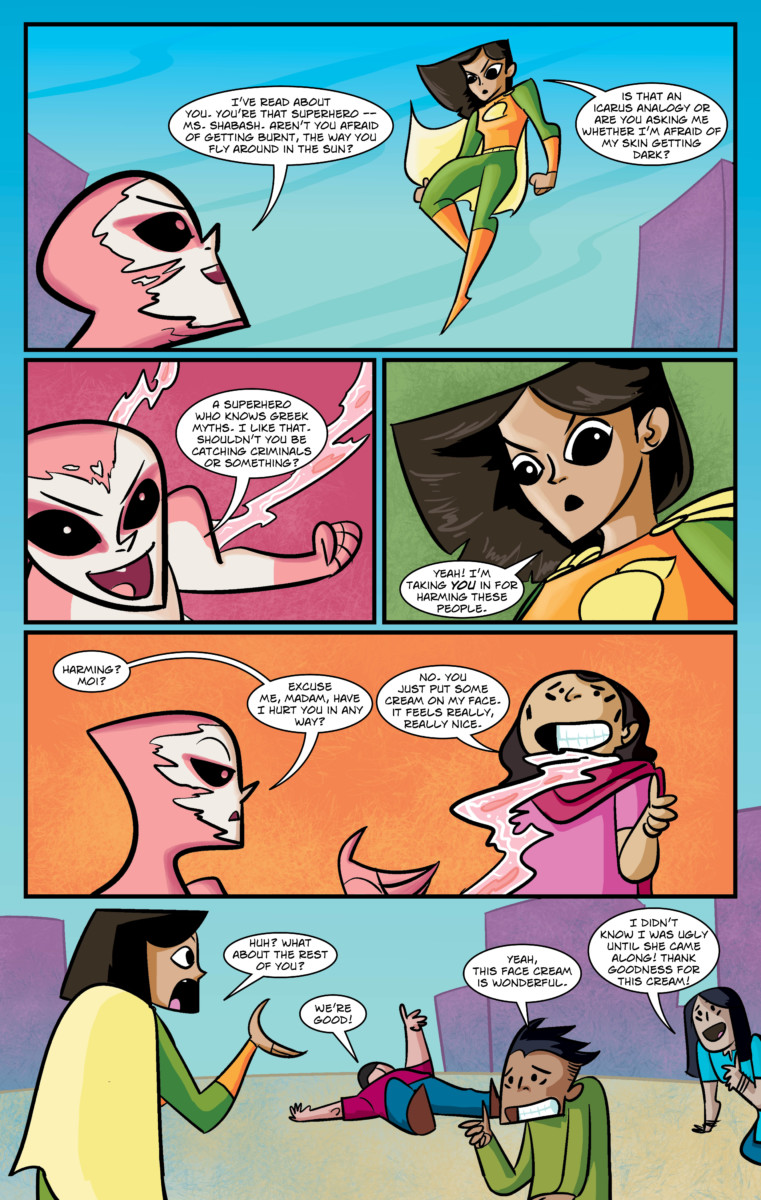 When Ms. Porcha dives into a pool of Chemical W, she becomes a Whitewash monster and spreads negativity in the streets of Dhaka city. As she brainwashes people into believing that they needed to “whiten up” their face to be accepted in the society, Ms. Shabash comes to the rescue. Ms. Porcha tries to sell Whitewash to Ms. Shabash but fails miserably because Ms. Shabash doesn’t need society’s approval to be confident. She is extremely comfortable in her skin; her confidence comes from within.

The Best Way to Shut Down Shamers is Positivity

In the “Attack of the Auntybots” story arc, Dhaka city is invaded by aunties who love to slut shame. When Ms. Shabash tries to stop them, they criticize her for wearing tight clothing. At first, she tries to explain to them that there is nothing wrong with her clothing because it’s functional, and she’s a superhero. However, that does not work, so she comes up with a different approach. Rather than attacking them with her superpowers, she challenges the aunties to a fun dance competition. Inevitably, they lose to Ms. Shabash’s groovy moves to Icona Pop’s “I Love It.”

READ: Love to read about positivity? See our article about FAITH and body positivity without objectification!

You don’t necessarily have to take part in a dance competition to justify your choice of clothing, but it’s important to understand haters gonna hate and shamers gonna shame. Ms. Shabash later understands this, which is why she no longer defends herself. She doesn’t need to because she can wear whatever she feels comfortable in. 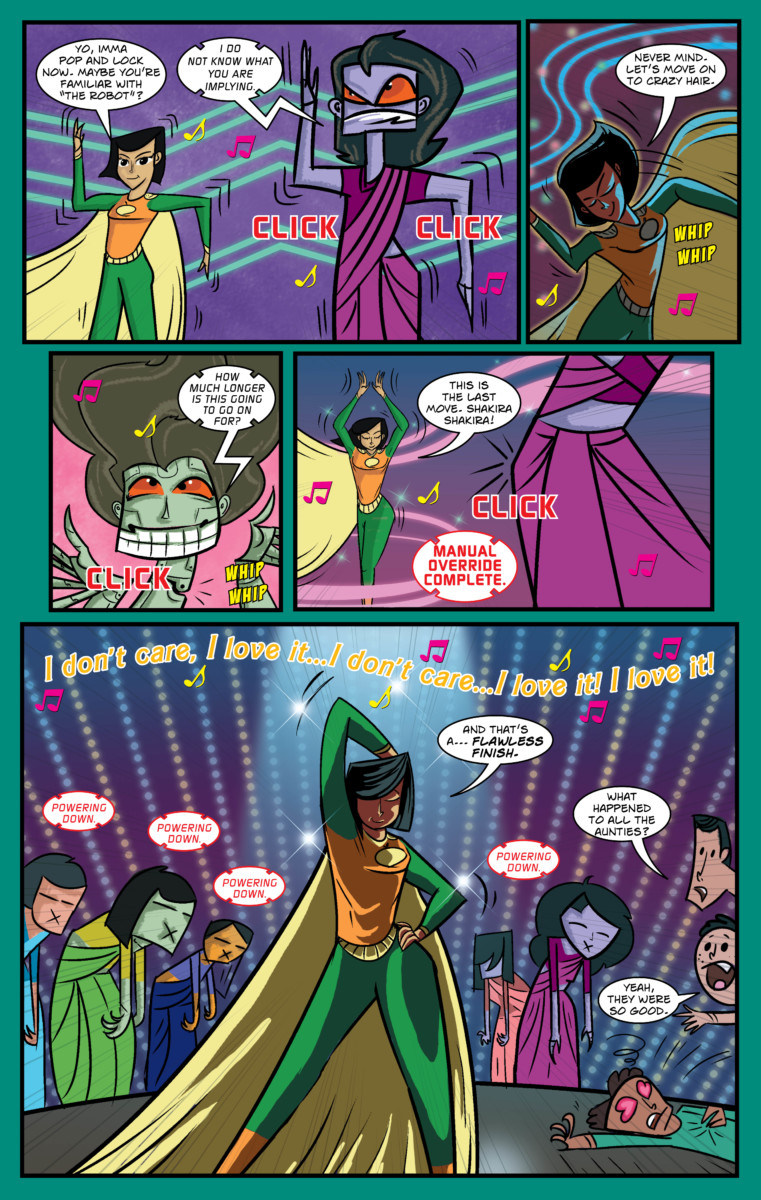 And these are all the lessons I got from a single installment. Ms. Shabash is the superhero all South Asians have been waiting for. She is strong, fierce, confident, and loves to challenge the norm. She is a role model, and we all have something to learn from her, regardless of our ethnicity.