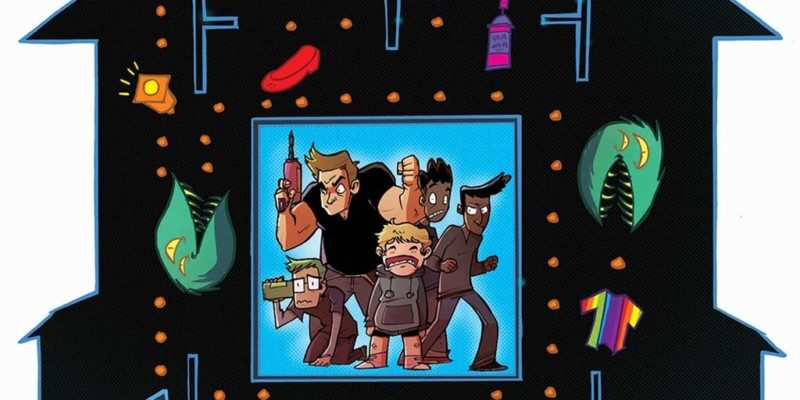 If you’ve never hung out with a high school stage crew, you might miss out on one of the main jokes in THE BACKSTAGERS, an ongoing Boom! Box comic by James Tynion IV and Rian Sygh, currently on issue #4. And it’s ok not to know everything about stage crew (the team responsible for designing and manipulating sets in theater). Focused around a new kid named Jory who joins stage crew at his high school, the comic certainly does an excellent job explaining stage crew to newcomers. It provides many visual examples of real-life stage crew activities, such as planning the lighting for the show and so on. Characters deal with the physical and mental challenges of working the stage, on top of the emotional stress of finding a place for themselves as the awkward queer kids in all all-boys high school. However, it does combine this with more fantasy elements, and that’s where people might get a little confused.

The stage crew that makes up the main cast of THE BACKSTAGERS just so happens to navigate a labyrinthine world under their all-boys high school. They go on epic quests while trying to find props, set pieces, and supplies for the actors. The places they venture seem to exist outside the real world altogether — hallways and classrooms shift location, dust bunnies with broken pencils mutate into monsters, and people can get lost inside forever if they’re not careful. When Jory first sees the labyrinth, he is amazed. He wants to learn everything he can about this part of the school, how it works, and what happened to the mysterious crew that disappeared in ’87. Yet, nobody outside of stage crew knows this place exists — not because stage crew keeps it a secret but because nobody else cares about what the stage crew actually does. Certainly the actors do not care. They impatiently demand various items from the crew and refuse to partake in any discussion of what it took for those items to get to the stage. 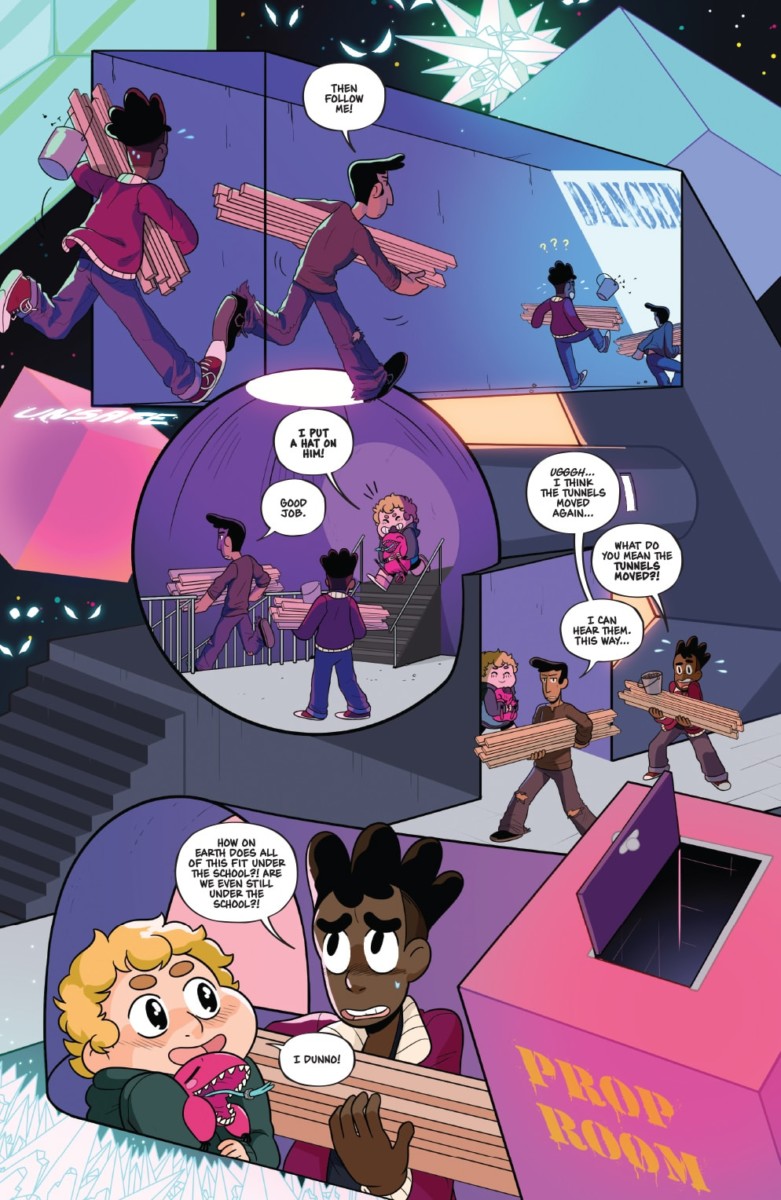 This might seem like an entirely fictitious premise for a comic, but you kinda have to get stage crew to get the joke. Let me explain.

Back in high school, I used to do a ton of theater. Most of my afternoons were spent by the auditorium stage, rehearsing scenes and bonding with the other actors. The stage crew was also hard at work during those afternoons, preparing costumes, maneuvering big set pieces, and so on. Yet the cast and crew rarely spoke with each other. We were so wrapped up in our own work that we never really stopped to ask what the crew was up to.

However, when I did hang out with the stage crew, I was always surprised. To do their work, they would often go to all these bizarre parts of the high school that nobody else really knew about — the creepy basement under the auditorium or the mysterious third floor that had no classrooms, for instance.

One time, as I was rushing to my AP Art class all the way across the school, I watched as one stage crew kid (who happened to be in my art class) leisurely walked in the opposite direction. When I got to the distant classroom, this friend was already seated and talking to our teacher.

He just smirked and said, “I know my way around.”

So you see, in real life, the stage crew might not actually navigate bizarre, reality-warping mazes hidden throughout the school, but there are times when it sure feels like they do.

READ: Check out our analysis of music and representation in Disney’s MOANA!

THE BACKSTAGERS is a comic created by people who really understand the experiences of stage crew life. A lot of the humor in the series is centered around the lack of communication between the crew and cast, as well as around how the crew feels like outcasts even among the outcasts. For instance, almost all the characters in the comic are queer, but there’s definitely a hierarchy among which types of queer people get to be celebrated in the spotlight and which ones are more behind the scenes. 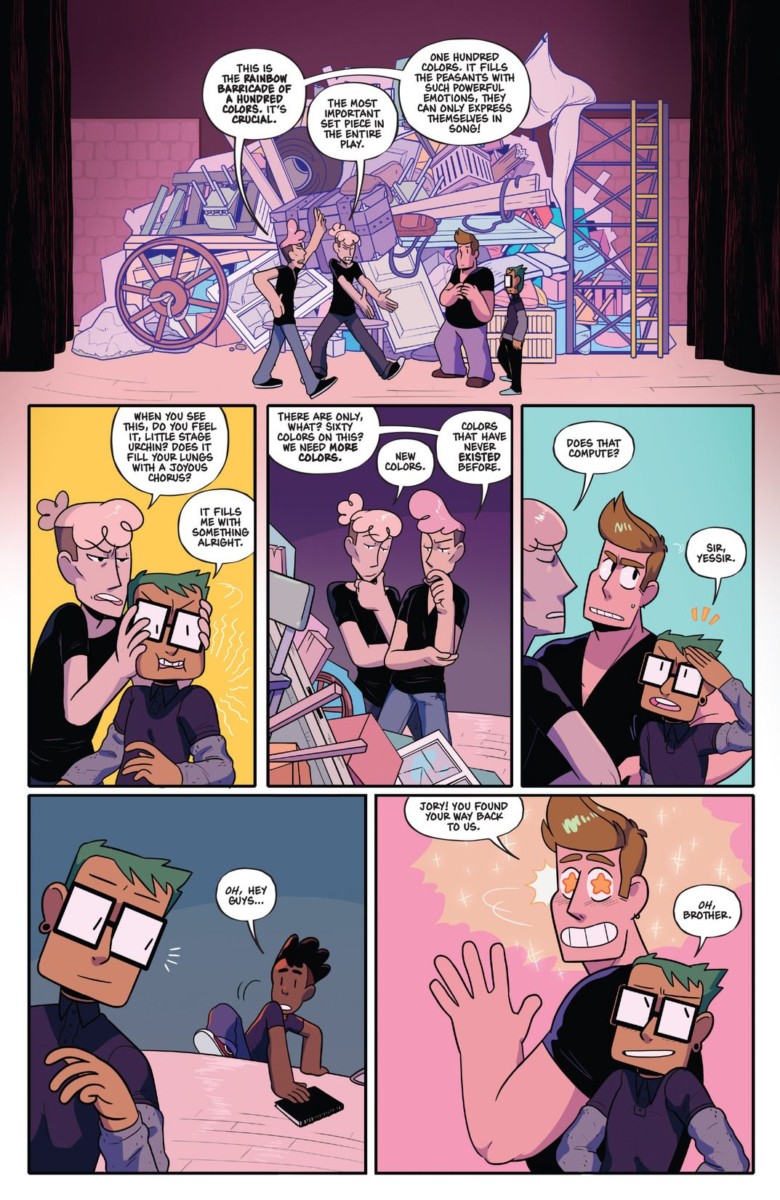 On stage, the McQueens twins are the stars of the show. They are two classically campy white, thin, cisgender gay men. In any other part of the school community, they would probably be picked on for not fitting a straight masculine mold. However, within the small bubble of the theater community, which most straight cis men avoid like the plague, the McQueens are on top. They have the perfect appearance for the cover of any gay magazine. These guys fit perfectly the beauty ideals of the gay male community, which forces men to maintain either a thin twink aesthetic or a more muscular gym bunny look. If you can’t fit either of these, you get branded as unattractive. Eating disorders are common in the gay male world for a reason. Plus, these ideal looks are mainly centered around whiteness. If you’re a gay man of color, your body must fit in with racist stereotypes, and you can only exist as a fetish for white men who have “jungle fever” or are “rice queens.” And transmen have troubles with body image too, since the gay male community is intensely phallocentric.

While the actors have the perfect twinks as the stars, the stage crew has the less marketable parts of the queer male world. New kid Jory happens to be a timid black bisexual guy. There’s also a bearded fat femme and a grouchy transman, for starters. The main gay romance involves different body types! It’s between Jory, a small non-muscular black guy and Hunter, a white guy who’s big and chubby. If there’s any body policing or queer male beauty standards in THE BACKSTAGERS, it comes from the silent judgment of the performers, not the main characters themselves. 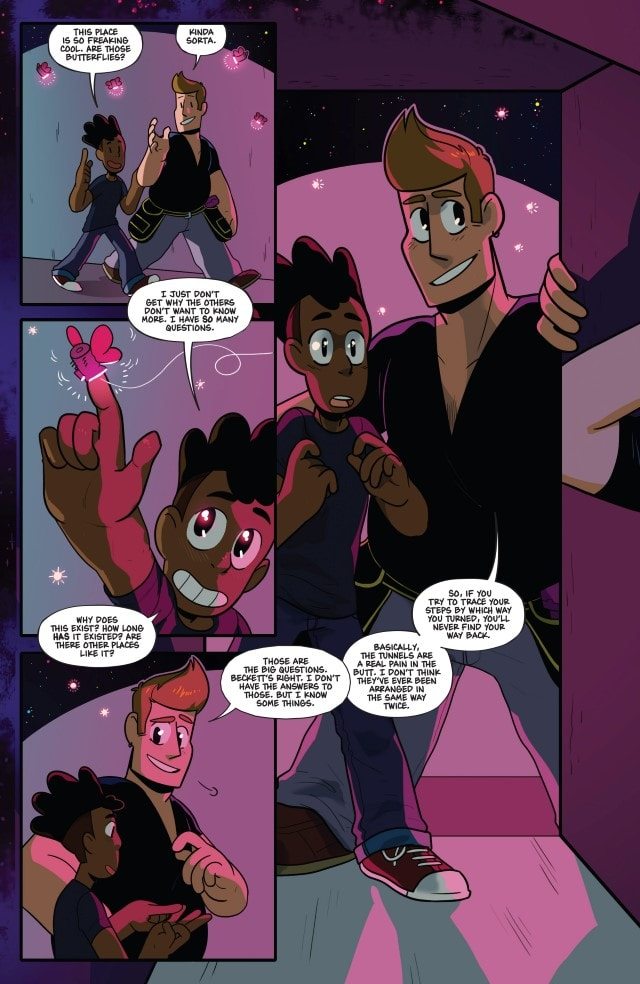 It’s significant here that the cast and crew are divided in this way. By populating the stage cast with more accepted parts of the LGBT community and the stage crew with the less accepted parts, THE BACKSTAGERS simultaneously makes a commentary on the (very queer) theater world and the full LGBT world which theater is associated with.

READ: How does Laverne Cox’s performance in ROCKY HORROR change the show?

In issue #1, when the stage crew introduces their backstage world as “where the real stuff is. The raw stuff that nobody ever thinks about. Or thanks you for. Or really ever appreciates,” there’s a dual meaning. On the one hand, they mean that literally the theater community does not value their stage crew’s hard work and hidden knowledge. But on the other hand, they mean that the types of people who get to star in queer media get all the appreciation while the types of people who work behind the scenes in queer media get ignored. Even though their struggles are often larger-than-life and, through those struggles, their knowledge of the world is far more expansive.

The hidden labyrinth is both literal and symbolic. It’s the physical world that only the stage crew cares about and the inner workings below the thin, white, cis male surface that only the weird queers get to see.

Talk to a stage crew member. They know their way around.