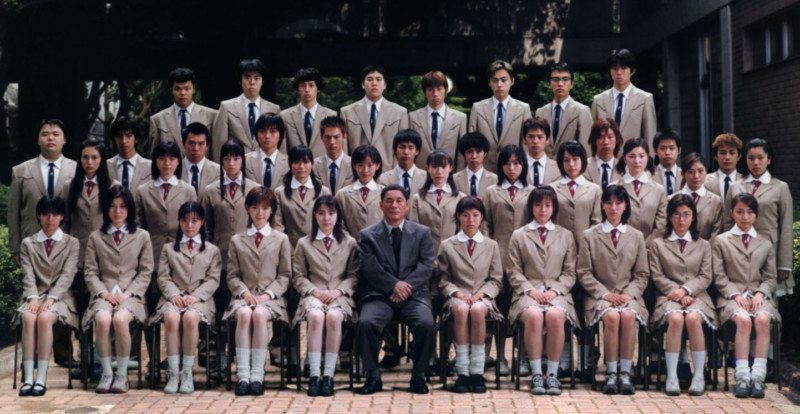 This article is part of ComicVerse’s back2skool series! Check the rest of the articles out here!

All kids feel like school is a life or death experience. While these feelings are a hyperbolic side effect of being young, there’s still a sense of struggle between teacher and student. The teacher is a role that is an eternal contradiction: confidant and snitch, friend and disciplinarian, educator and dictator. That impossible to define relationship is one that is beautifully expressed in the film BATTLE ROYALE. If the life and death feelings of high school are a product of the imagination, then BATTLE ROYALE made that feeling a reality. Before Katniss fired a bow, before anyone ran through a maze, before whatever the hell happened in those DIVERGENT books, a group of randomly selected Japanese school kids were thrown onto an island and expected to fight to the death in the 1999 novel BATTLE ROYALE.

The novel’s popularity led to a quick film adaptation in 2000 by director Kinji Fukasaku. However, unlike the modern YA dystopian novels that it inspired, BATTLE ROYALE’s greatness lies in its simplicity. Rather than being bogged down by the world building of a futuristic society, BATTLE ROYALE’s allegorical tale plays out like, well, a day at school. The near future of the novel and film doesn’t feel much different from the world outside our door. This is likely why, 16 years after its premiere, the film still feels as fresh as ever.

Rather than a rebellion fighting a totalitarian regime like in most dystopian YA fare, BATTLE ROYALE is a generational conflict. It’s a film about how the older generation inevitably fails the younger one, and social navigation of school becomes a place where adolescent love, friendship, and adult influence blend to become the ultimate game of survival. It’s a film I don’t think I truly understood emotionally until I became an educator because, as strange as it may seem, BATTLE ROYALE, by its end, becomes a statement on the empathy needed to heal the fraught relationship between student and teacher. 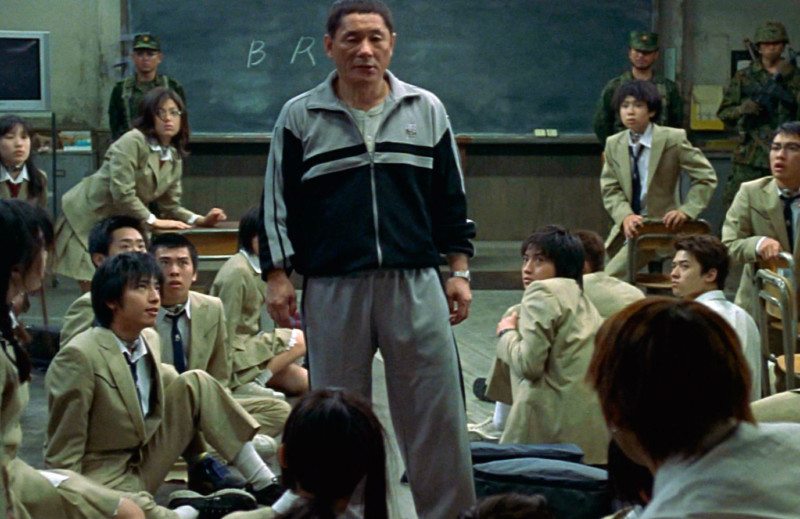 In the not-too-distant future of BATTLE ROYALE, the nation of Japan is in shambles. Unemployment is at an all-time high and the youth are revolting through truancy and disrespect for their elders. To restore order, the government enacts The BR Act. The act proclaims that every year, a randomly selected junior high school class will be banished to a desert island. The students will then fight for survival until there remains only one survivor. If more than one is left, they all die. All of this is a way of sending a simple message: the youth are often the first to blame for the problems of the world.

CLICK: Who needs books when you’ve got comics? Check out our list of great comic book literary adaptations

The BR Act is a twisted, violent version of that mistreatment, most recently seen in the nearly constant verbal beat down that Millennials, like every youth generation before them, receive from the press. In fact, the fictional Japan of BATTLE ROYALE feels uncomfortably close to the modern economic woes of America. Of course the youth of America can’t afford houses, cars, or credit cards because the economy tanked and most of them are saddled with student debt. This strife creates the generational conflict at play in BATTLE ROYALE. The children are blamed for the state of the nation, so they are shown no respect, which in turn encourages the students to rebel against their elders, who then in turn blame them for the ruination of society. 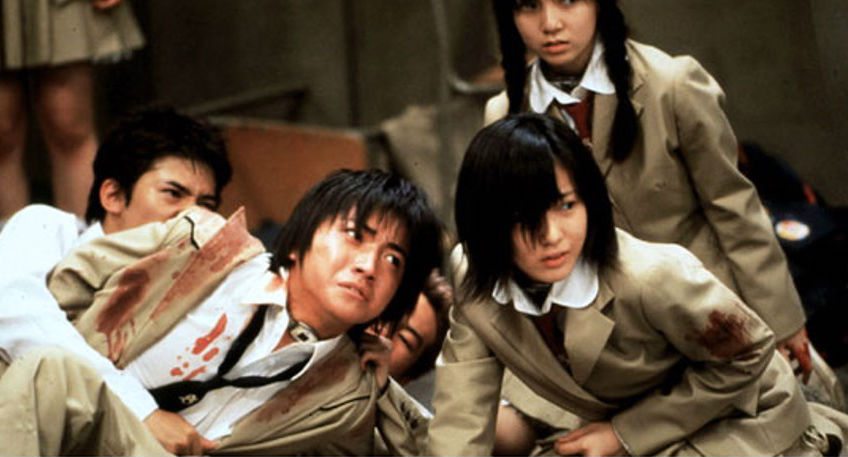 It’s the same scene that plays out in our schools year after year: adults assume the kids have changed too much from their simpler time of youth, while the kids reject the adults for their trenchant commitment to their flawed perception of the world. It happened with the hippies, the goths, and the Gen X’ers. In the film, Kitano (Takeshi Kitano) is the closest thing we get to a fully developed adult character in the film. He’s hateful and spiteful towards the children, and they return that spite in kind, including one violent attack on Kitano in the film’s opening.

CLICK: School can be a maddening series of random, meaningless occurrences that can drive one to madness…here’s our guide on how to avoid all that!

One has to wonder if Kitano was always so nihilistic about the potential of his students, and the film offers no answers. Was Kitano once optimistic and hopeful about the way he could change the lives of his students and slowly turned cynical? There’s little respect given to teachers in American society to the point where there are states where the governor has openly admitted that the teachers’ union deserves “a punch in the face.”

As more is revealed about Kitano, the audience sees that behind his wall of anger is a bitter, lonely man. We see him rejected by his daughter, and watch as he tries and fails to reach out to the student Noriko Nakagawa (Aki Maeda). This is the film’s way of showing how the adults, the educators and guides, are often just as lost as the students. Rather than looking inward or at larger forces, it’s easy to look at the students as the source of woes. They are the ones teachers see every day. They are the ones who can drive their teachers crazy with their actions. It makes them easy targets, which makes it even easier to forget that these kids are often products of their environments.

Kitano’s lack of faith in the future is a reflection of how youth cultures are often treated internationally. Kitano’s hopes were dashed when he expected the children to conform to his ideals. His failure as a nurturing educator is just one more adult who fails to provide guidance for the students in the film. This failure to provide encouragement makes the students rebel, which makes adults cynical all over again. The snake eats its own tail as the next generation inherits the future.

“This Be the Verse”

People are all reflections of our progenitors, either because we followed their example, or tried our damnedest to be nothing like them. The uncut version of BATTLE ROYALE digs deeper into the incompetency of adults as role models for these children. In the opening, our protagonist Shuya Nanahara’s (Tatsuya Fujiwara) father is first revealed in the film after committing suicide. His father hangs from the ceiling with his pants around his ankles with his final words to his son scrawled on toilet paper. Fukasaku frames this scene without dignity or pride. The moment is humiliating and the death pointless. The son is abandoned by his father, but this fact likely escapes Kitano, who refuses to show empathy for Shuya. Instead, Kitano becomes another disappointing male role model for Shuya.

Also in the aforementioned director’s cut, we become privy to the background of Mitsuko Souma (Ko Shibasaki) who initially seems like a child who has simply been driven mad by the twisted game of the BR Act. In reality, she too suffered at the hands of a parent. The director’s cut reveals a scene where a young Mitsuko returns home from school to discover her mother has, essentially, sold her to a pedophile. When the man attacks Mitsuko, she pushes him down the stairs, killing him. The mother’s selfish sacrifice of her child becomes the starting point for Mitsuko’s blood lust.

Without the positive influences of mothers and fathers, parents impart lessons on their children through cautionary tales of their behavior. Shuya learns his father’s lesson and fights for what he wants to avoid being seen as a loser like his dad. Mitsuko refuses to become a victim again and becomes one of the deadliest players in the game. Each of them was forged in failure rather than love and empathy. 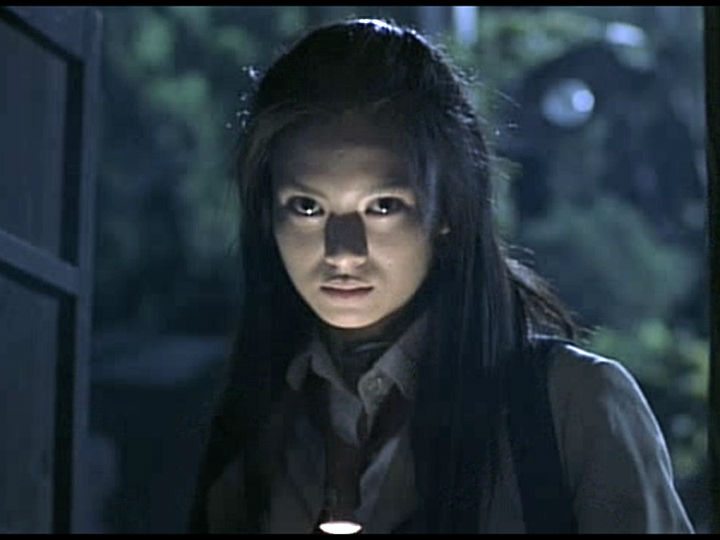 These are only two backstories of many, but it highlights the impotence of teachers and their ability to reach their students. The power of a teacher ends at the doorway to the school. It’s easy to forget that the students who make teachers love their jobs or make teachers miserable all come from a home that is meant to nurture them, but often doesn’t. Kitano’s failure as an educator is the same failure of the parents. Not only is he unaware of the suffering of his students, but most damningly, he does not care.

CLICK: Think you know what makes a good school movie? As if! Click here for our breakdown!

Does this leave children without any responsibilities for themselves? Of course not. But without proper guidance, they can never learn pride, trust, or basic social skills. Without love from their parents or strong adult role models, kids cannot show love to themselves or each other. We watch this unfold as the kids find it all too easy to turn on one another. They have watched their parents act selfishly, so why shouldn’t they do the same?

The director’s cut features an originally wordless dream sequence featuring Kitano and Noriko that has been added back into the film with dialogue. The scene is an odd moment of tenderness for Kitano, who has shown mostly contempt for the students throughout the film. The scene closes with Kitano asking Noriko, “What do you think an adult should say at a time like this?” We never hear the response. Perhaps it’s because the adults should have nothing to say to the youth. Their job is not to tell students how to act, but to set examples for them. The teachers are merely there to guide them to their future paths. As Bruce Lee once said, “A teacher, a really good sensei, is never a giver of ‘truth’; he is a guide, a pointer to the truth that the student must discover for himself.” The guidance of teachers, myself included, may not always be perfect, but we can better shape our future if we refuse to direct cynicism toward youth.

If we want them to prove their worth, we have to be willing to let them disappoint us, to fail us, then show them how to keep fighting anyway instead of condemning them for it.