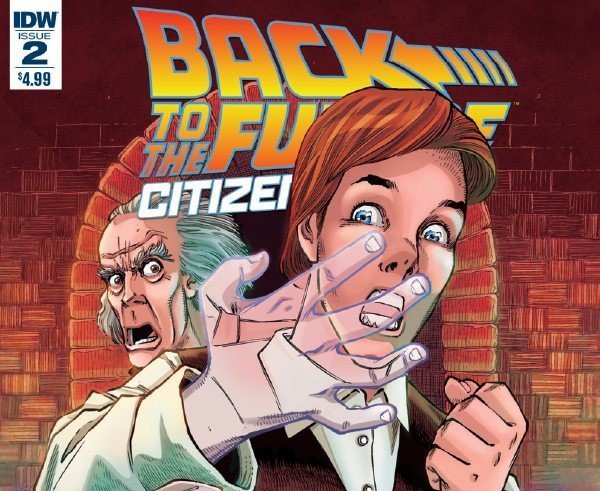 BACK TO THE FUTURE: CITIZEN BROWN #2 continues IDW’s adaptation of the popular BTTF video game by Telltale. Last month’s debut issue faltered a bit, as writers Bob Gale and Erik Burnham stuck very close to the game’s quest-driven structure at the expense of narrative flow, so this installment had to play some catch-up.

READ: Check out or review of the first issue of BACK TO THE FUTURE: CITIZEN BROWN here.

The issue begins right where the first ended, with Marty beginning to disappear from existence in 1931. He and Doc quickly figure out that their actions from the previous issue inadvertently led to Marty’s grandfather, Arthur, suffering a severe beating at the hands of the Tannen crime family and fleeing town, therefore never meeting Marty’s grandmother. They travel back in time and whisk Arthur to a safe house, careful to do so after Marty’s meeting with him but before the beating. Content to have seemingly repaired the continuum, the duo returns to 1986. 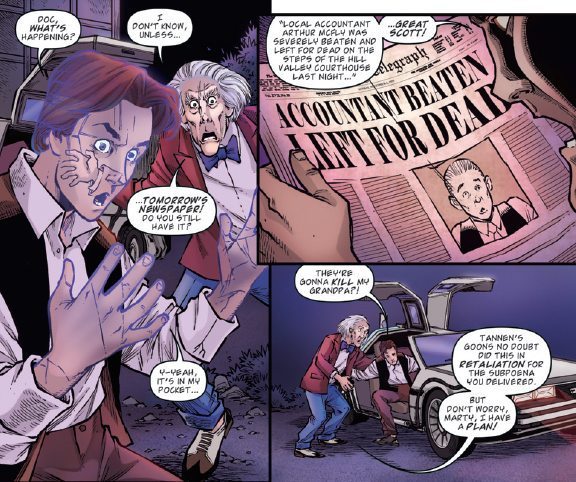 When they return, Marty and Doc quickly discover that things have gone wrong, as 1986 Hill Valley is now a decrepit wreck under the control of Biff and his family. Returning to 1931, they learn their previous actions have once again affected history, this time causing Kid Tannen’s arrest to never happen. Marty goes undercover and is eventually able to set things right thanks to some help from the police, Tannen’s showgirl mistress, and even Doc’s 1931 counterpart. Then, at the end of all of it, they learn that history has once changed in a shocking new way upon their return to 1986.

READ: Catch up on what’s going on in the main BACK TO THE FUTURE series here.

BACK TO THE FUTURE: CITIZEN BROWN #2 is a vast improvement over the first issue in terms of pacing. It reads and flows like a comic book, with the “quest-specific” video game style toned down considerably. Beyond that, the plot itself is structurally similar to BACK TO THE FUTURE II—especially the 1986 sequence, which is very similar to the film’s infamous 1986-A continuity—in that it’s heavily reliant on keeping track of multiple timelines, each of which has several versions of Doc and Marty. There’s even an instance where one version of Marty watches an earlier time-traveling version of Marty do something before taking further action himself. Still, the book does well to avoid reading too much like BTTF II; in fact, I doubt anyone who’s not too familiar with the film would notice the similarities at first.

Personally, as a time travel and BTTF junkie, I like this issue. The multiple timelines are easy follow, especially in a comic book format where a reader can turn back a few pages (or scroll, if reading digitally). That said, readers’ mileage may vary depending on how they feel about temporal-shifting storytelling. I’d say a good rule of thumb here is if you like the second film, you’ll enjoy the issue. If you don’t like BTTF II, or haven’t seen it but generally don’t enjoy overly layered time travel stories, then this comic probably isn’t for you.

From an artistic standpoint, I like Alan Robinson’s work a bit better this time around. Perhaps it’s a case of simply getting used to his designs, but the cartoony style really worked better for me here than it did in the first issue. I particularly liked his versions of Marty’s parents in the 1986 sequence, especially the haunting wheelchair-bound George McFly. The two look like they’ve been beaten down by life and completely robbed of their spirit in the new timeline. Also, as a nice bonus for art junkies, IDW has included a special section at the end of the issue that shows the evolution of Robinson’s pages from sketches to fully realized comic book pages with inks from Salo Farias and colors from Maria Santaolalla that’s definitely worth checking out. 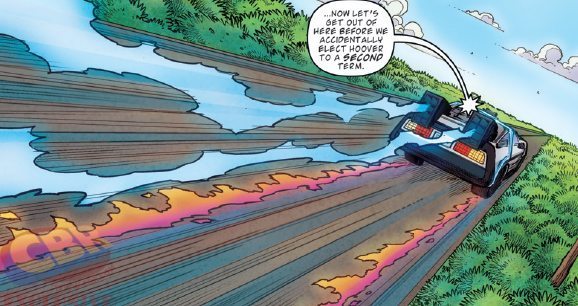 BACK TO THE FUTURE CITIZEN BROWN #2 is in a class above the miniseries’ first issue. The pacing has been fine-tuned, and the story’s temporal twists and turns will keep most BTTF fans engaged throughout.