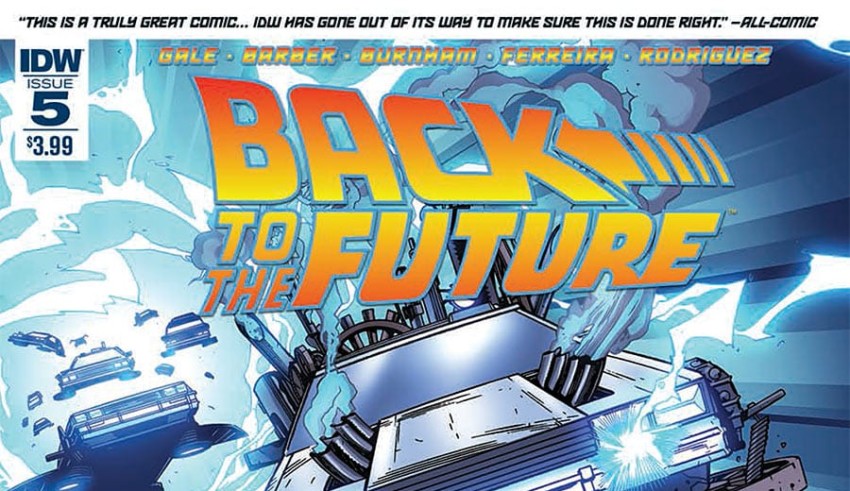 After four issues of distinct A and B stories focusing on the major characters of the BTTF Films, BACK TO THE FUTURE #5 gives us a full-length story mostly focused on the backstory of one of the franchise’s lesser known characters, while also providing some unknown information about Doc Brown.

BTTF #5 begins in the comic’s usual late-third-film time period, on the day that Doc Brown has seemingly completed the time-train for travel. As he and his family ready for departure, his wife Clara begins an internal monologue. She begins reminiscing about her childhood and her unusual interests. We see momentous occasions of her life fully fleshed out that were formerly only described in the third film (such as receiving her first telescope and her first Jules Verne novel).  We also see that her proclivity towards science left her unable to connect with any 19th-century men. This loneliness, combined with the death of her parents, led her to move west, setting up the events of the third film. 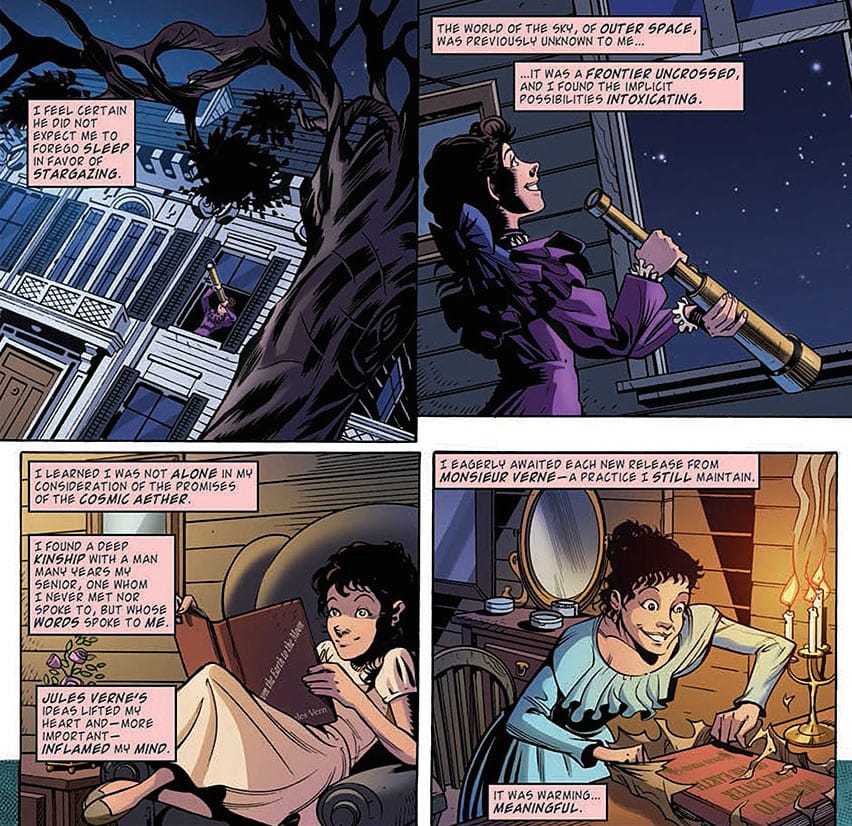 Clara next goes through a CliffsNotes version of her and Emmett’s meeting and courtship in BTTF 3, culminating in both of them being stranded in 1885, a time neither of them was supposed to have been alive. She moves on to remembering a conversation between her and Doc where he confesses to her the events of alternate 1985 from the second film, including the previously unknown detail that the 1985-A version of Emmett Brown had been lobotomized.  He tells her that these events have left him opposed to the idea of ever time traveling again. However, after the birth of the couple’s children, Jules and Verne, Clara confesses to Emmett that she yearns to travel through time. In turn, Emmett confesses to her that he’s been developing the time train, leading back to the start of the issue.

READ: Catch up on previous issues of BACK TO THE FUTURE here!

Though the series has featured some moments of mythology-building and fan service in its previous four issues, BACK TO THE FUTURE #5 is the first time the series has really embraced these elements 100%. The backstory of Clara Clayton is one that fans of the franchise have been curious about since her introduction in the third film, and writers John Barber and Erik Burnham (along with a story-credited BTTF-screenwriter Bob Gale) don’t disappoint. They take the morsels of information given in the film and expound on them considerably, creating a very satisfying history for the character that’s interesting in its own right and totally in line with the film. In fact, I’d argue that the Clara crafted in this issue is much more developed and three-dimensional than her cinematic counterpart. 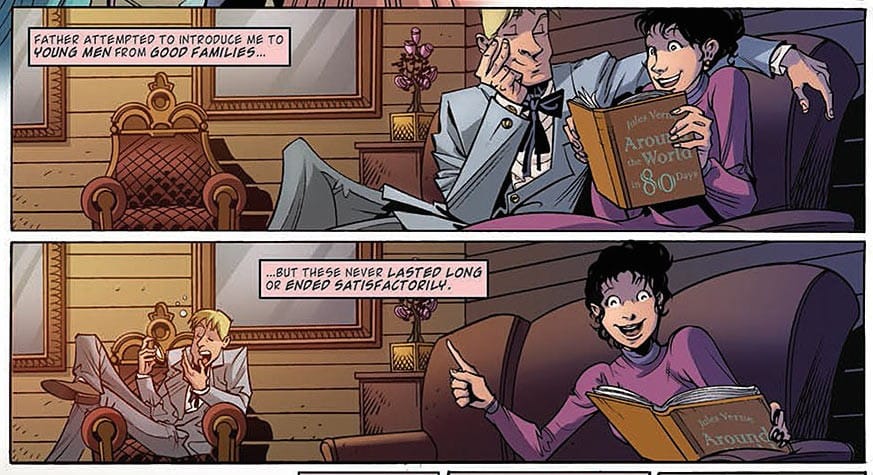 Besides the depth added to Clara’s character, the best characterization in the book is given to Doc Brown. While the bits of backstory we learn about him are only learned through Clara’s flashback, they’re still quite effective at adding a new layer to Doc Brown. Since the second film shows most of 1985-A through Marty’s point of view, it’s a nice change to see it through Doc’s eyes. The revelation that the alternate version of the character had been lobotomized is a successful twist, especially with the horror that the “normal” timeline Brown feels at said revelation. 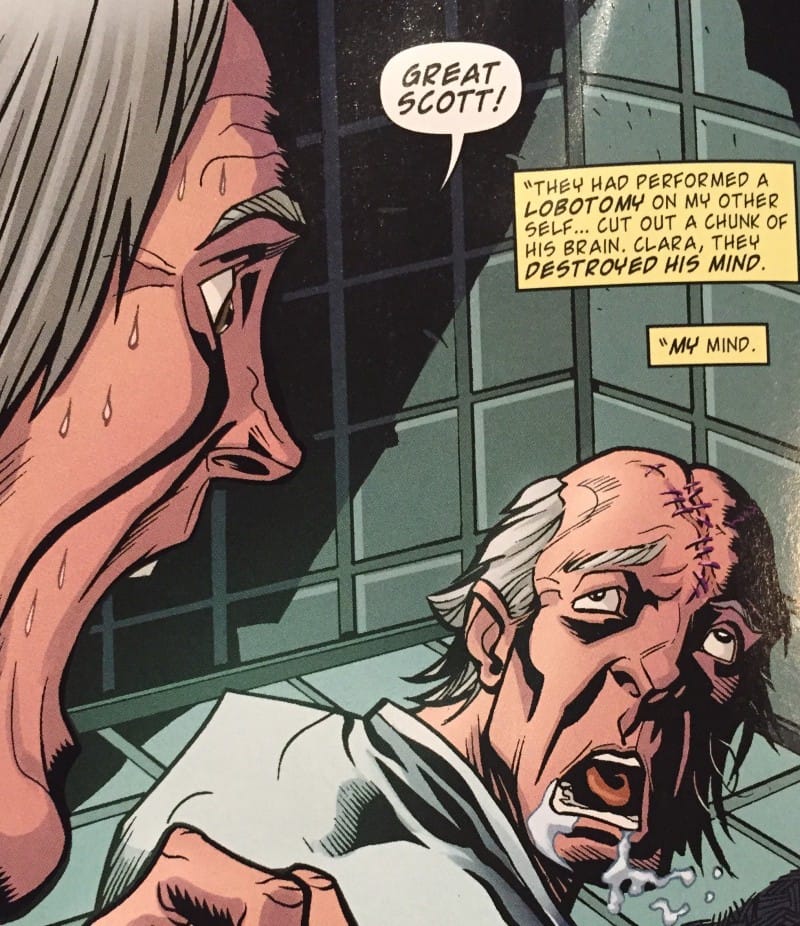 Artistically, this issue is the most consistent of the series so far. Perhaps because this was the first full-length story in the series, IDW brought in Marcelo Ferreira for penciling duties, and it’s a vast improvement over the series’ usual art. The scene of Doc Brown encountering his lobotomized self is a definite highlight, as it’s truly a haunting visual.

As IDW’s BACK TO THE FUTURE continues its transition into an on-going series from its initial mini-series roots, the book has produced its best whole issue to date. The backstory revelations alone make it a must read for fans of the franchise.