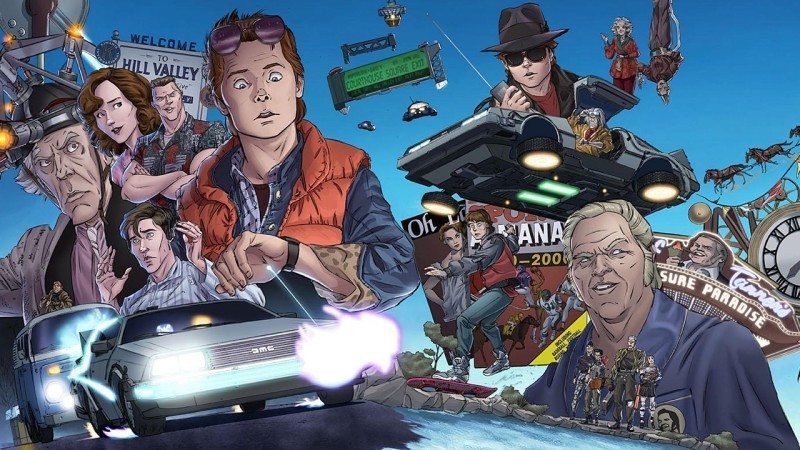 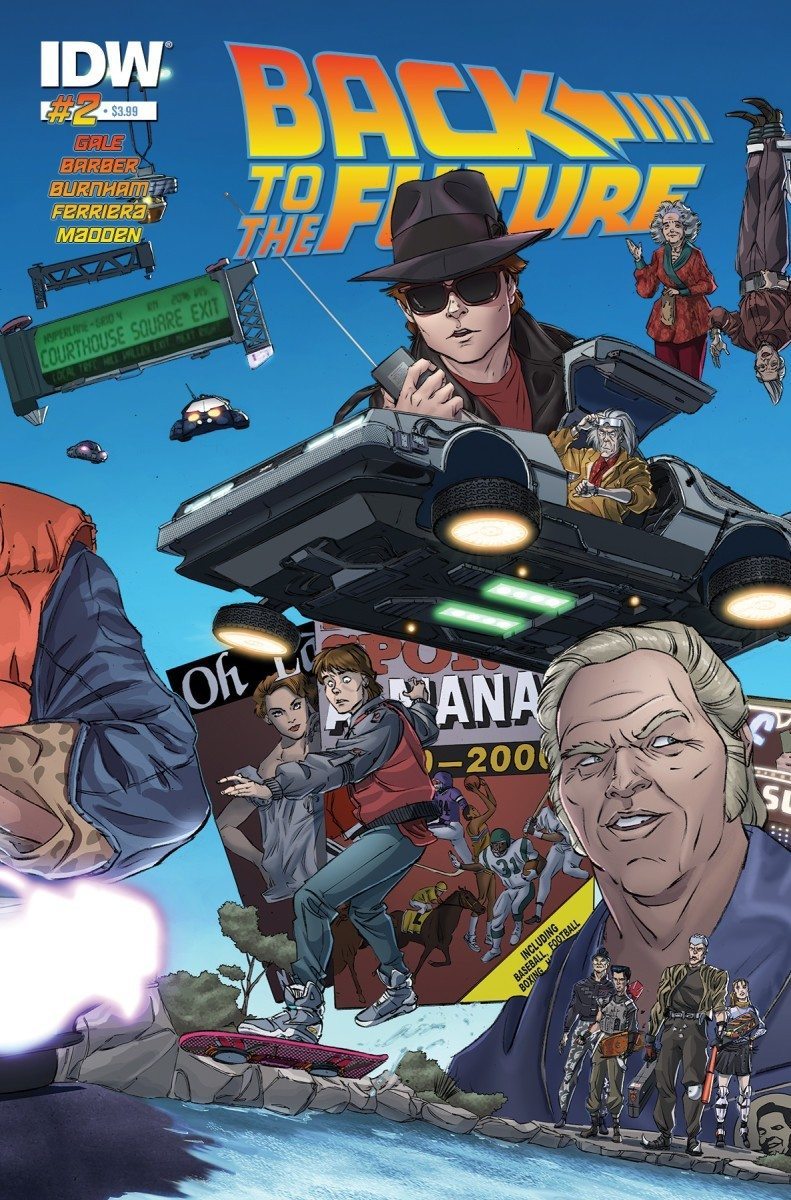 A-Story: THE DOC WHO NEVER WAS by Bob Gale, John Barber, and Marcello Ferreira

BACK TO THE FUTURE #2’s A-Story uses the same framing device as the first issue, opening in 1885 in the period after Marty McFly has gone back to 1985, but before Doc Brown (who stayed behind to start a family) has completed his time train from BACK TO THE FUTURE PART 3. This issue, Doc is working on the tracks for the time train, and after a cameo from Marshall Strickland, the Doc once again starts reminiscing to his sons Jules and Verne, this time about an incident in 1962. 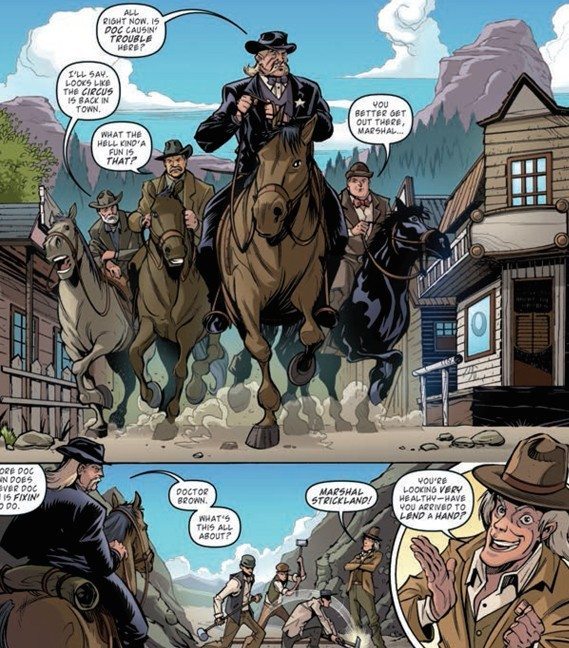 READ: Like IDW? Check out our review of their other own-going title JEM AND THE HOLOGRAMS

The flashback begins with Doc watching news coverage of the Cuban Missile Crisis and lamenting that he’s yet to make sufficient progress on his time machine, though he knows he’ll successfully complete it since seven years earlier in 1955 he had successfully sent Marty McFly back to 1985 (as seen in the first BTTF film). Doc is interrupted by the arrival of two US military men, one of whom he’d worked with on the Manhattan Project in the 1940’s (part of which was seen in issue one’s B-Story). Remembering Brown’s time travel theories, the US Military offers him unlimited funding in exchange for him developing a time machine for them. Initially Brown is ecstatic, even showing the officials his initial prototype. 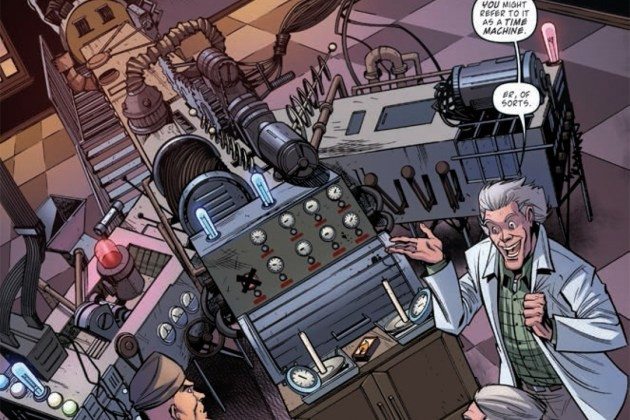 Later that night, Brown seemingly awakens to the DeLorean time vehicle and a Russian speaking Marty Mcfly on his lawn. Marty whisks the two into the future, namely 1982, and Doc is horrified to find a world in chaos. There’s open warfare between heavily armed military troops and a Roman Legion, nuclear bombs are continuously dropping, and buildings are disappearing and reappearing before said bombs can destroy them. Doc Brown quickly deduces that if he gave the government his research it would kick off a temporal arms race, eventually leading to all out time war. The Doc suddenly awakens back in 1962, unsure if his experience was a dream, a vision, or actual time travel. He does decide not to assist the government, burning down his prototype and home (the infamous insurance fire, famously alluded to in the films and other pieces of expanded BTTF media, including the first issue of this series). Back in 1885, Doc wraps up his story just in time for Clara to arrive on the initial version of the time train,  setting up next month’s third issue.

READ: Catch up on BACK TO THE FUTURE with our review of the first issue.

The second story in BACK TO THE FUTURE #2 opens up in Doc’s laboratory, circa 1984. Marty McFly is desperately searching for something he can use for a school science project he had ignored. Much to his chagrin, Doc won’t do Marty’s project for him, but does offer the use of anything in his lab. Marty stumbles through several of Doc’s inventions, including a rake/tie combo necktie, before inadvertently magnetizing a battery.  Marty runs off with it, while Doc gets a call about a certain stainless steel car he was interested in. 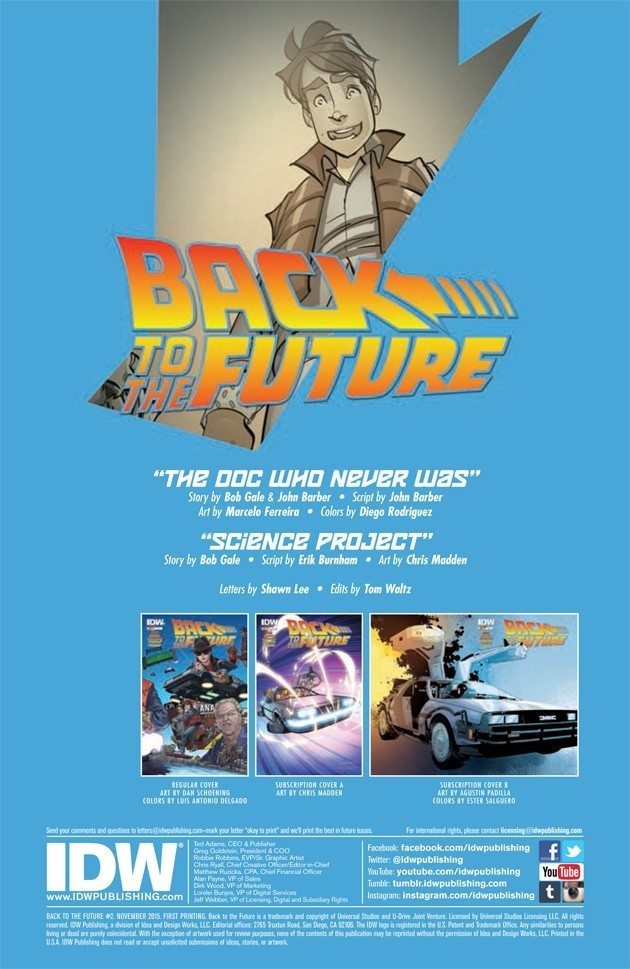 The second issue of BACK TO THE FUTURE is the inverse of the first as far as plot strength goes. This time, the A-Story is much stronger. The concept of Doc Brown’s work for the government has been a topic of intense interest amongst BTTF-fans for years, and I was happy to see it explored again here after it was touched on last month. I also loved the 1982 temporal war sequence, and the concept of the US and the Soviet Union involved in a time-traveled fueled conflict is one so interesting that I wish this story was longer. Honestly, I would welcome a whole BTTF Graphic Novel focused solely on that alternate timeline. In comparison, the B-Story simply couldn’t compete. It was entertaining in it’s own way, but the “Marty finds one of Doc’s whacky inventions” trope got old very quickly, even with the story’s low page-count. 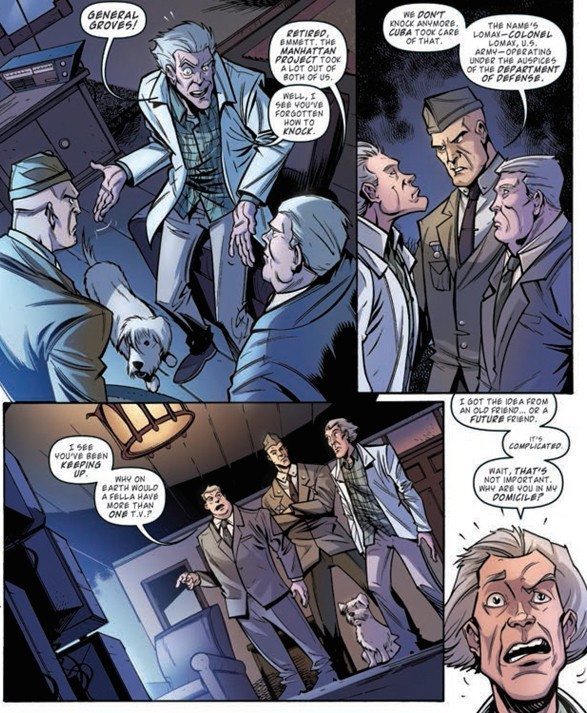 READ: Love Film and TV Adaptions? Check out our most recent review of SUPERGIRL

Once again, BACK TO THE FUTURE series co-creator/co-writer Bob Gale’s fingerprints are all over the characterization in this book. In the A-Story, Doc Brown is true to how the film series implied the character would be in the period between 1955 and 1985, confident in the knowledge that he would eventually succeed in building the time machine (since he’d already helped Marty get back to the future) but frustrated at his lack of progress and funds. I also liked the way Doc’s attitude towards helping the military slowly evolved from where it was when he was first approached in the 40’s. The second story, while easily the weaker of the two, does show the great mentor/pupil yet friends relationship that is a hallmark of the characters Doc Brown and Marty McFly.

Artistically, the issue falls somewhere in the middle of the work from the first issue. Namely, it’s not as bad as the ill-fitting work from that issue’s A-Story, but not quite as good as the smooth work in its B-Story. Of the two stories in this issue, the first is stronger artistically. Artist Marcello Ferreira captures the mannerisms of Christopher Lloyd’s Doc Brown performance very well, and the artwork in the ravaged 1982 is a really interesting take on the apocalypse. The second story’s art by Chris Madden drifts a bit too far into the cartooney for my taste, but I will admit that it does fit the comedy, almost comicstrip nature of that story. 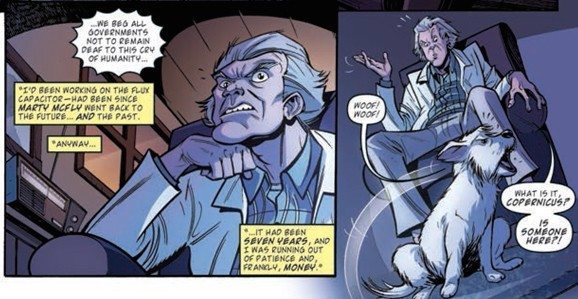 All in all, I would once again recommend BACK TO THE FUTURE #2 mainly to die-hard fans of the series. However, I would go further this time and recommend the A-Story in the book to any fans of alternate history novels or post-apocalyptic settings.