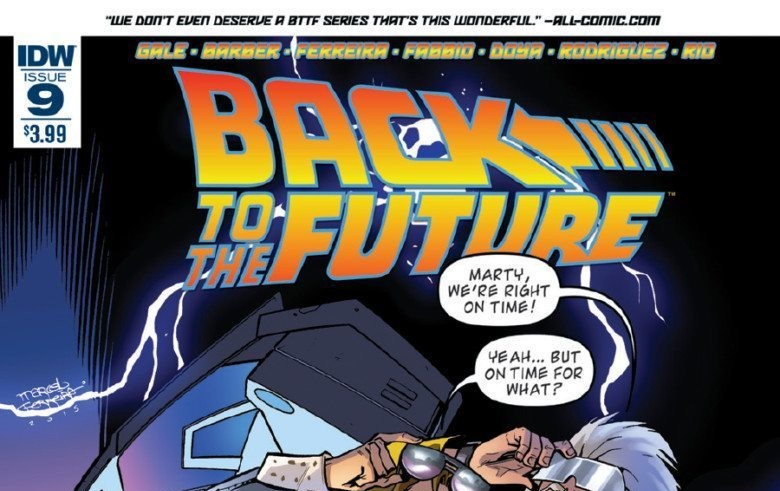 The ninth issue of IDW’s BACK TO THE FUTURE series continues the “Continuum Conundrum” arc. Last issue, writers Bob Gale and John Barber’s time-travel adventure saw a still-somewhat-amnesiac Doc Brown and his ever-faithful protege Marty McFly preparing to head to the year 2035. Their goal was to trace Doc’s voyage through time as they tried to figure out what he was up to and how he lost his memory.

READ: Catch up on previous issues of this BACK TO THE FUTURE story-arc here.

The issue begins in 1986 with Marty and Doc using a rudimentary version of the time circuits attached to a hot air balloon to travel to the future. They arrive in 2035 with plans to head to the location of Brown’s lab, hoping to find some answers as to what’s going on. However, they first end up taking some detours: first through a Hoverboard Roller Derby and then a visit to Cafe 2015—the evolution of Cafe 80s from the second film. In the midst of all this, a bonk on the head seems to restore Emmett’s memories. The duo does eventually get to the lab, but unbeknownst to them they’ve been followed by a new version of an old foe. 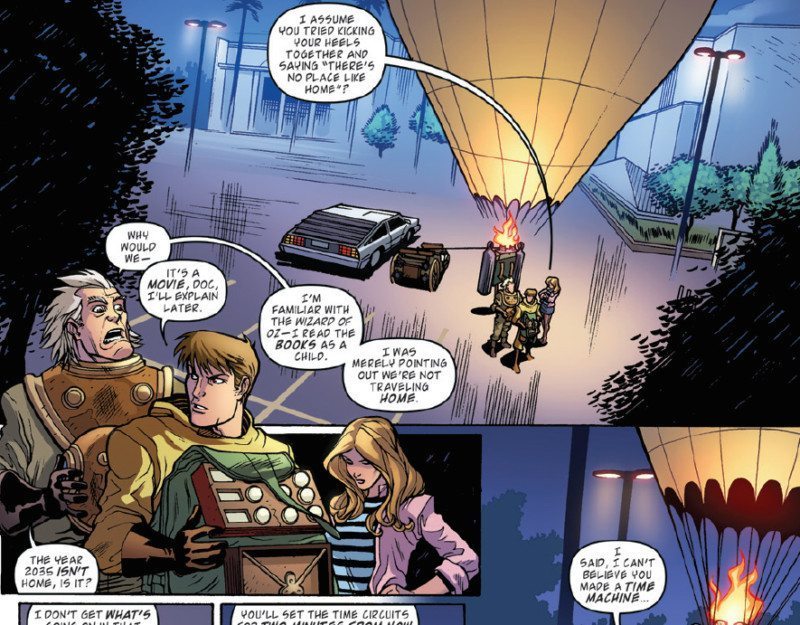 I’m not quite sure how to I feel about BACK TO THE FUTURE #9. As part of the larger “Continuum Conundrum” story, it feels like a let-down. Where last issue answered some questions, this one is content to barely move the story forward. Granted, Marty and Doc do travel to the future, but they spend their whole time there stumbling through Hill Valley and then eating lunch. At one point, the latter even chastises the former for the fact that they’ve stopped looking for answers. This meandering might be acceptable if the issue was heavily focused on character development, but it’s not. Outside of some poignant moments between Doc and Marty when they’re on the balloon and later having lunch, the issue is just a series of set pieces.

As an individual issue, independent from the broader arc, though, those set pieces are pretty entertaining. The aforementioned balloon scene is an entertaining lark that seems like something Doc Brown would come up with, and it features some quality dialogue between the two. The chase sequence through the Hoverboard arena is a bit cliche but short enough to be fun, especially thanks to the series of BACK TO THE FUTURE II film references littered throughout.

The highlight of the issue is the Cafe 2015 sequence. While it does slow down the plot, it’s highly effective on its own. First off, the setting is a brilliant way to update the classic corner cafe/saloon running joke from the film series. It also serves as a bit of meta-commentary on how the filmmakers’ vision of 2015 in 1989 compared to the real thing. The references in the restaurant are a mixture of those from the film combined with actual current pop culture in a way that melds both together into a coherent vision of the future.

READ: Want to compare this to its CITIZEN BROWN sister series? Read our review here.

Beyond the setting, I really enjoyed the conversation between Marty and the Doc in which McFly confesses that he misses their adventures together because they were the only time he felt like he was making a difference in his life. It really opens up the Marty character in a way that the franchise rarely does, and it was really the shining characterization moment in an issue that’s otherwise lacking in that area.

Artistically the work from Marco Ferreira and Athila Fabio is what we’ve come to expect from this series. The character designs are so-so, but we can move past them, the book is pretty pleasing to the eye. The team captures 2035 particularly well, combining the original film version of the future with a more modern and realistic take on things. 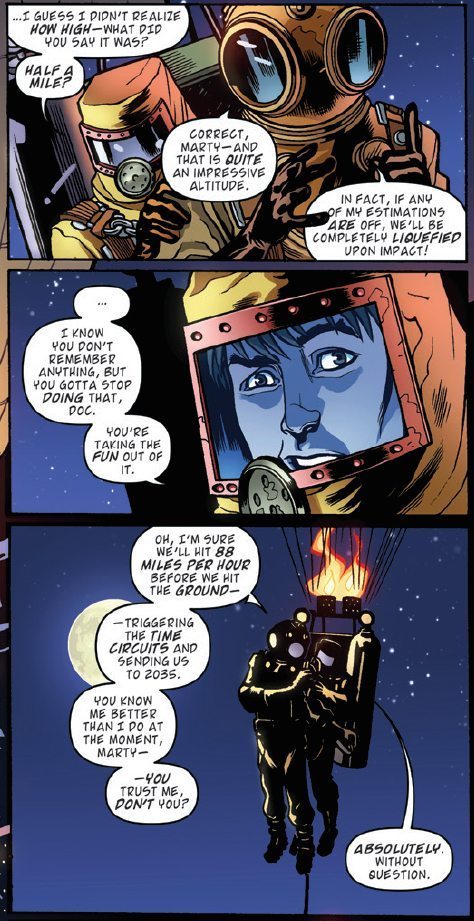 BACK TO THE FUTURE #9 is a strange issue to get a handle on. On the one hand, it feels like absolute filler in the “Continuum Conundrum” story, but on the other, it’s a really entertaining read on its own. I would recommend it to fans of the franchise and characters for the cafe scene alone—with the caution not to expect much story progress.