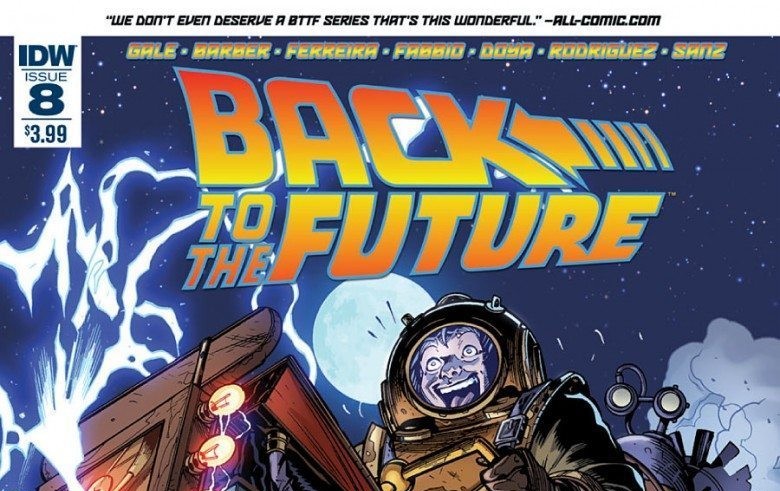 Two weeks after dropping the first issue of the BACK TO THE FUTURE: CITIZEN BROWN mini-series, IDW Publishing is cranking up the Flux Capacitor again for the eighth issue of their monthly BACK TO THE FUTURE book. This issue, from writers Bob Gale and John Barber and artists Marcelo Ferreira and Athila Fabbio, continues the Continuum Conundrum storyline. Inside we find Doc Brown returned to 1986 with no recollection of how he arrived, why he’s there, or the family he left behind in the 1890s.

READ: Compare BACK TO THE FUTURE #8 to the first issue of BTTF: CITIZEN BROWN!

The issue begins with a flashback to 1893, detailing how and why Doc went back to the future. He’s built a rudimentary time machine so that he can head back to the Eighties and retrieve the final parts he needs to complete the time train. Despite the concern shown by his wife Clara, and their sons Jules and Verne, Doc heads off to 1986 vowing to return immediately. When he doesn’t, Clara pens the letter to Marty McFly that he discovered in an earlier issue. 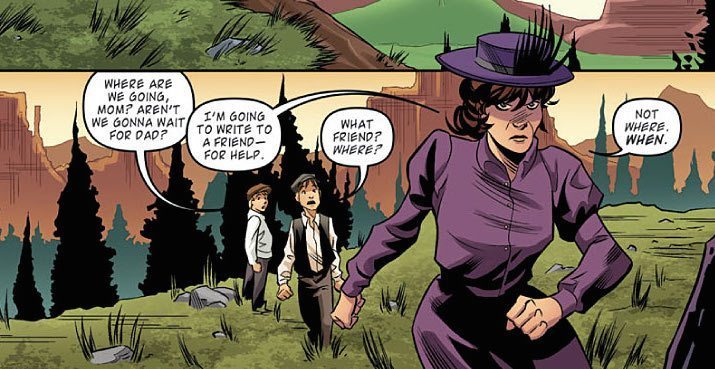 The story then shifts to 1986, where Marty is engaged in a car chase/duel with his perennial rival Needles as he, Jennifer, and the Doc attempt to recover the remains of the destroyed time machine. After a lengthy car chase, Jennifer is able to trick Needles into crashing into an egg truck. With their foe vanquished, the three head to the Lone Pine Mall to try and make sense of the situation. Slowly but surely over the course of the issue, parts of Doc’s memory have returned, leading to the trio figuring out how the ad-hoc 1893-constructed time machine worked. From there, Marty’s examination of the time circuits leads to the realization that Brown didn’t come straight from 1893 to 1986, but in fact went to 2035 first. The issue ends with Marty and Doc planning to head back to the future to solve the mystery.

Coming just two weeks after the same writers gave us CITIZEN BROWN #1, it’s natural to compare BACK TO THE FUTURE #8 to that issue. Both issues focus on adventures that take place after (or as relatively after as time travel will allow) the events of the original trilogy, however, this issue is vastly superior. While the former book was bogged down due to the nature of adapting a video game, the latter has the freedom to explore the series and its numerous timelines. 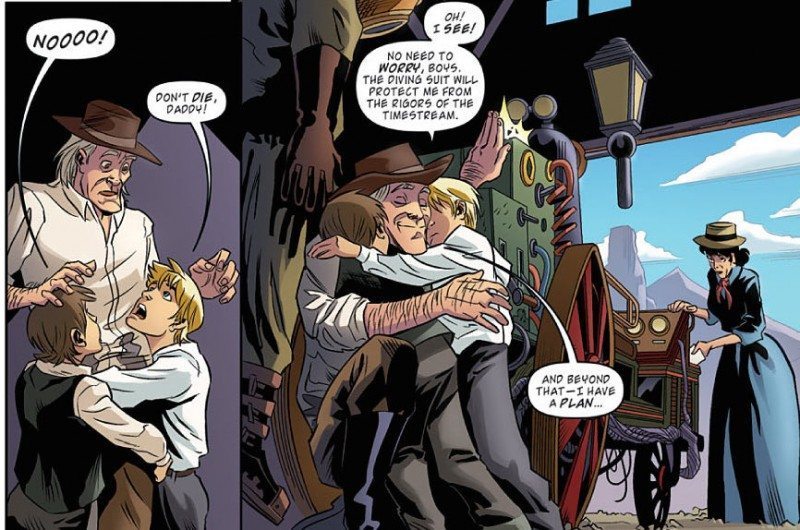 Plot-wise, the issue does a good job of balancing the action heavy Marty/Needles car chase sequence, while at the same time finally doling out some exposition as to how Doc ended up in the Eighties by himself. The writers use a potential head injury to possibly explain where his memory has gone. The ending bodes well for future issues, as I’m greatly looking forward to seeing Doc and Marty return to the BTTF-version of the 21st century. The only slight negative I’d put against the book is that it definitely reads like a chapter in a longer story and therefore isn’t very new-reader friendly.

From a character standpoint, the choice to have Doc Brown with no memory is a good one that immediately differentiates the storyline and issue from previous BTTF media by reversing the traditional roles of the two protagonists. Doc Brown is now the confused party who’s unsure of what’s going on, while Marty is the voice of experience and reason. I also enjoyed the way Gale and Barber used Jennifer Parker this issue. The character often ends up in the background of BTTF stories, however here her inner conflict over helping Doc Brown versus her desire to see Marty live a normal life really elevates the story. 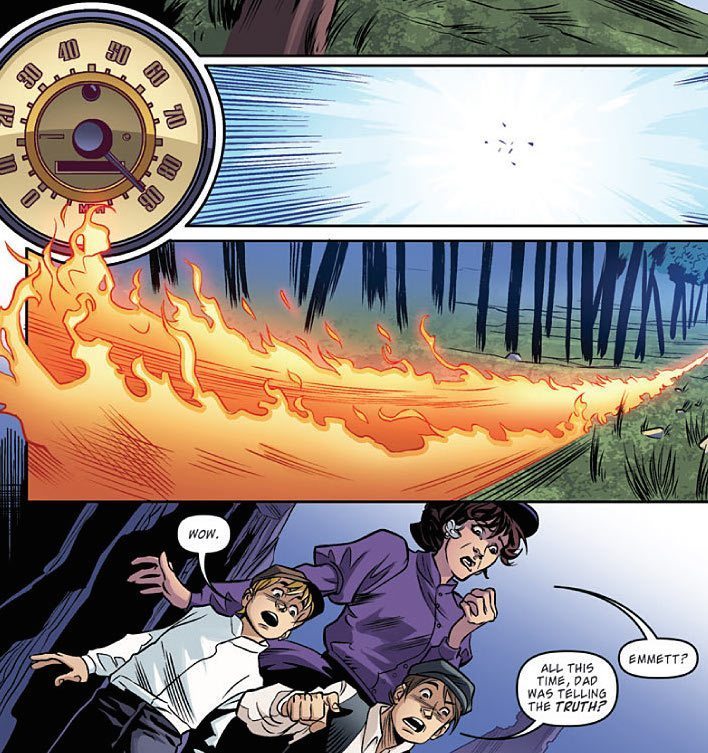 Art-wise the book is solid, as Ferreira and Fabbio do a good job with the characters. They hit the series’ usual middle ground of not looking like the actors from the films, but close enough to them to be recognizable. My only slight nitpick with the art is a coloring issue. During the car chase sequence, the trucks driven by Marty and Needles are almost the exact same color, sometimes making it hard to differentiate the two. Diego Rodriguez and Esther Sanz are the credited colorists on the issue, though I won’t put the onus on them as it could be a printing error or artistic choice made by another member of the creative team.

On the whole, BACK TO THE FUTURE #8 is another solid BTTF comic from IDW. It continues the “Continuum Conundrum” storyline in a satisfying way, though I wouldn’t recommend it to new readers looking for a jumping on point.