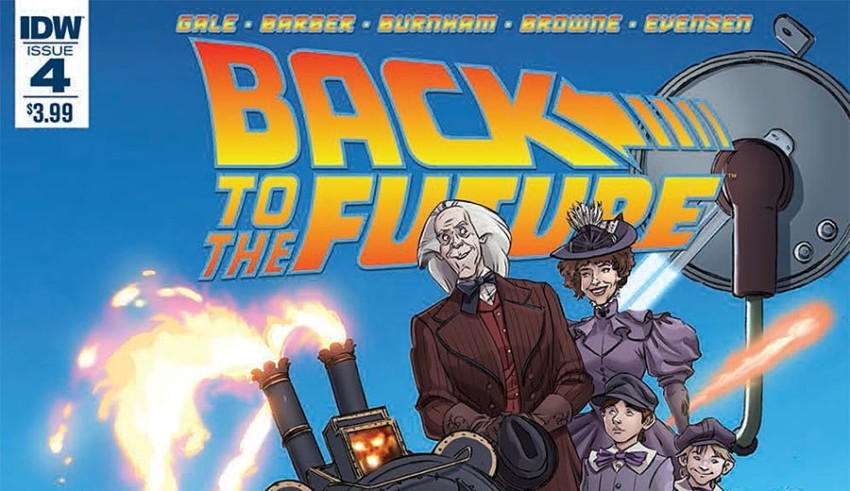 Initially scheduled as a 3-issue series, the success of IDW’s BACK TO THE FUTURE led to the series becoming an ongoing. The series takes advantage of that new status by using its fourth issue to tell two stories fans have been desperate for since 1985.

The issue’s A-Story kicks off with the now familiar framing story set near the end of BTTF Part 3, as Doc Brown is putting the finishing touches on the time-train we see at the end of that film. He’s keeping his progress from his wife Clara, however, as he’s afraid she won’t actually want to venture into the future with him. When he’s caught in his lie by his sons Jules and Verne, he begins telling them a story as usual.

LISTEN: Like non-superhero comics? Listen to our latest podcast on NAILBITER!

The issue shifts to November of 1984, roughly a year before the events of the first BTTF film. We find Marty McFly in the parking lot of his high school, awkwardly hitting on Jennifer Parker, whom we know as his future girlfriend/wife. She initially seems flattered by him, until Needles shows up and brings out Marty’s jealous streak by bragging about his car. An enraged Marty heads to Doc Brown’s lab for advice. Though he doesn’t find the Doc’s tips all that helpful, he does notice that the Doc has a new car (the Delorean, in the process of being turned into a time machine) hidden under some tarps.

The next day, we find Marty working off his frustrations by playing Wild Gunman at the local 7-11. Once again he runs into Jennifer, once again the two flirt, and once again they’re interrupted by Needles. Marty, feeling emasculated, concocts a plan to steal Doc’s car to impress Jennifer. He breaks into the lab, only to be followed by Needles and his gang, who were goading Marty to breaking them in all along. The two come to blows, but Doc Brown saves the day, ensnaring Needles in one of his security gadgets. He then convinces Marty to ask Jennifer out, and the two begin dating. Back in the Old West, Clara enters the barn, confessing that she not only heard Emmett’s whole story, but that she still dreams of going to the future and, more importantly, going where he goes.

READ: Feeling behind? Catch up on previous issues of BACK TO THE FUTURE here!

The issue’s B-Story begins near the end of the first BTTF film, when Doc Brown travels to the future for the first time. After initially finding himself at an 80’s Retro Car show, the Doc enters the 2015 version of Hill Valley, familiar to fans of BACK TO THE FUTURE PART 2. He quickly realizes he has no available funds to purchase futuristic upgrades, such as a Mr. Fusion reactor or hover conversion for the time machine and begins theorizing on how to make money. After visiting a pawn shop (the one Marty buys the infamous sports almanac from in the film) and doing some research, he realizes what the “single greatest investment in human history” is and heads back to 1938 to buy a stack of ACTION COMICS #1 issues, which he then sells in 2015 for a massive profit. 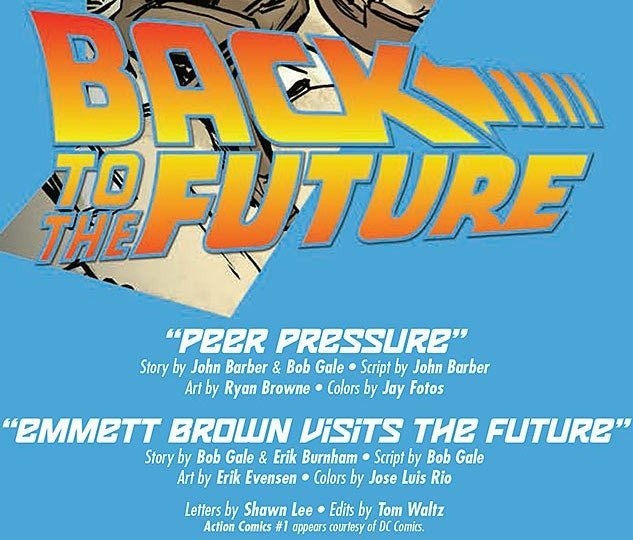 BACK TO THE FUTURE #4 is, by a pretty wide margin, the best issue of a series that has steadily gotten better since its shaky debut. For the first time in the series’ run, both the A and B stories are really well done and answer big questions about the trilogy. The first tells us not only how Marty and Jennifer started dating, but also gives us some insight into the relationship Doc Brown and Marty had before the start of the first movie. The second finally gives some insight into the Doc’s visit to the future from the end of the first film. Hopefully, we’ll soon see his first encounter with future Marty and his family that famously sends him back to 1985 to get Marty to “do something about his kids.” The ACTION COMICS #1 bit is also pretty inspired, and something I’m sure many a comics fan (myself included) has wished to do. 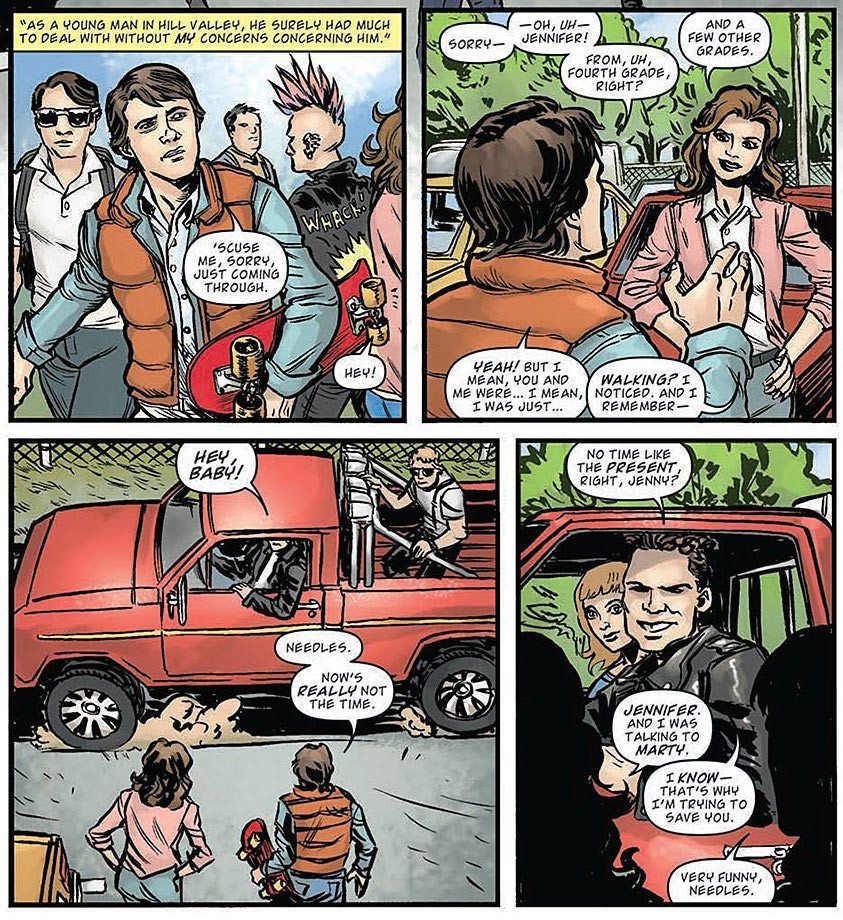 Issue four is also the best looking of the series by a mile. Artists Ryan Browne (on the first story) and Erik Evensen (on the second) both provide really solid art that looks like the actors without being too slavish to their actual appearances.

BACK TO THE FUTURE #4 is easily the strongest issue of the series so far. If it continues to get better, making the series an on-going one will be a decision to celebrate long into the future.