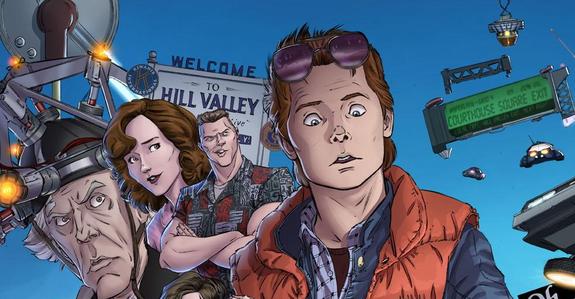 With films based on comic books being huge moneymakers these days, it should come as no surprise that comics based on classic film properties are becoming a large art of the comic industry, and in 2015 there are few classic film series with more buzz than the BACK TO THE FUTURE Trilogy. Celebrating both the original film’s thirtieth anniversary and the actual occurrence of the then-future October 2015 date that Marty and Doc travel to in the second film, BACK TO THE FUTURE has been all over social media this year.

Jumping into the fray is IDW Comics, who launched their new series on “Back To The Future Day” in October of 2015. With stories from the mind of series co-creator/writer Bob Gale, the stories fills in unknown stories and expands upon alternate timelines from the BACK TO THE FUTURE universe, split into A and B stories each issue. Does it succeed? Let’s find out. 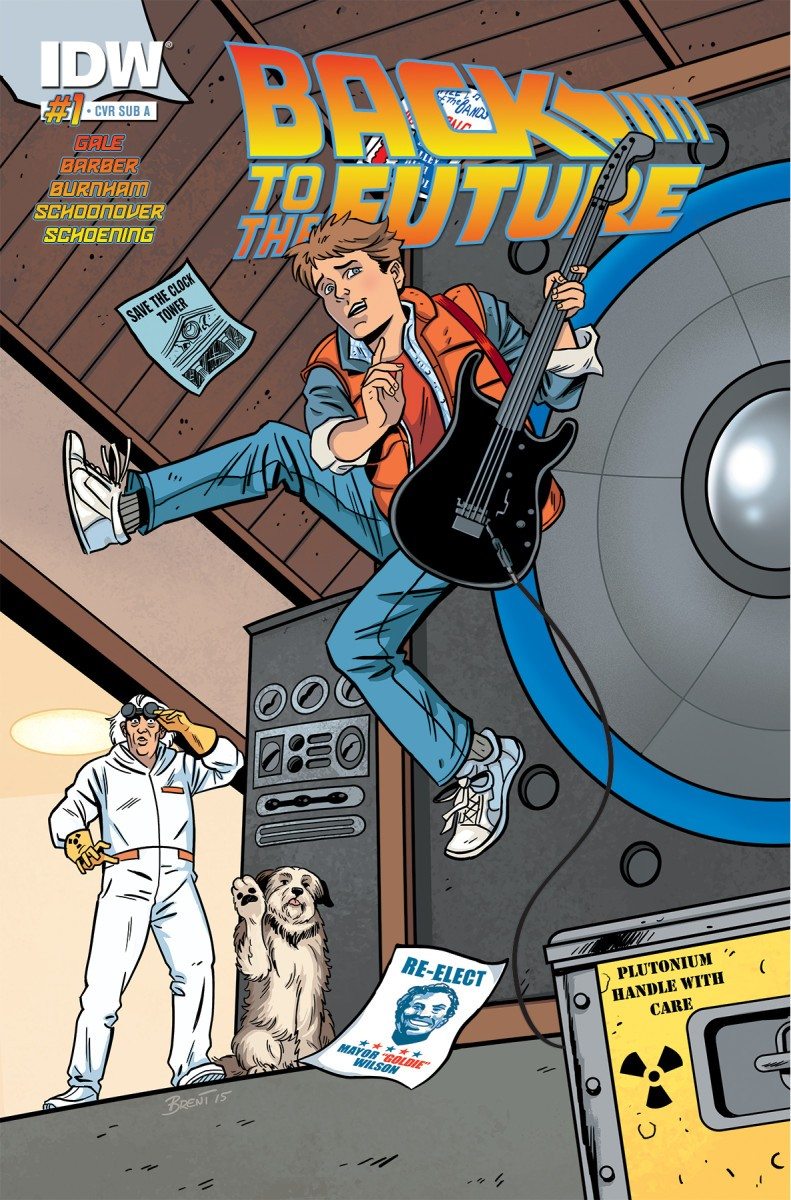 The first story in BACK TO THE FUTURE #1 begins on Emmett Brown’s western farm, in the period after Marty McFly has returned in 1985 in BACK TO THE FUTURE PART 3 and Emmett and Clara Clayton have married and had a family, but before he’s finished building the Time-Train that allows them to visit Marty at the end of the aforementioned film. As Doc Brown works on building a new Flux Capacitor, his son Verne questions what he’s doing, and the story’s framing device is set.

After sharing some details about the Brown family’s time in Hill Valley (including the answer to a question many BTTF fans have long asked regarding the Doc’s home) Emmett begins telling his son the story of how he came to meet Marty McFly. The story shifts to 1982, three years before the first film. Marty Mcfly is practicing guitar in his family’s garage, when he’s approached by school bully Needles (played in the BACK TO THE FUTURE sequels by Red Hot Chili Peppers bassist Flea) and his gang who demand Marty turnover a tube for use in his guitar amplifier. Marty refuses and the tube gets broken in a minor scuffle. Needles demands Marty get his hands on another, and calls an initially reluctant Marty chicken, which, as any fan of the films could have predicted, of course gets Marty to do it. 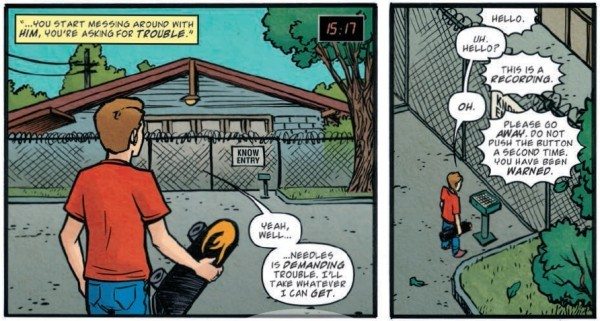 Marty scours several music and electronics shops, eventually finding out that the mysterious Doctor Emmett Brown has purchased every tub in town. Marty heads to his house, and after solving a series of preset riddles and traps he’s able to get in and after a few more boobytrap misadventures finally meets Doc Brown. Enigmatic as ever, the Doc offers Marty the position of his assistant which Marty accepts. The story wraps back to the framing device where Doc tells his son that without meeting Marty that day his life would be completely different, and his children would have never been born.

The second story featured in BACK TO THE FUTURE #1 doesn’t have any type of framing sequence, instead directly beginning on the campus of the California Institute of Technology in 1943. A young Doctor Brown barges into his department head’s office demanding to know why he’s been passed over for a Top Secret Government Project that several of his colleagues  have been drafted into. After being told that it’s because of his quirky ways and living conditions, the Doc begins begging for another chance.

Some time later, the Doc is having a meeting with two government officials in a clean and well-organized apartment. It’s going well up until it’s revealed that it’s not his apartment at all right before the agents leave, but rather his landlady’s. A dejected Doc heads back to his real apartment, only to find the government agents and Doctor J. Robert Oppenheimer waiting for him. After congratulating him on the ingenuity of his ruse, Oppenheimer invites the Doc to join the Manhattan Projects. Of note, this B-Story ends with a “To Be Continued…” indicating that it will continue in at least the next issue.

From a plotting standpoint, both stories in BACK TO THE FUTURE #1 are interesting reads for longtime fans of the franchise. The story of how Marty and Doc came to know each other has been asked by fans since the first film premiered, and this comic answers it adequately. Marty’s motivation, centered around Needles calling him “chicken”, is directly out of them film series, and gives a sensible reason for him to come into contact with Doc despite the characters vast age and lifestyle differences. The only issue I had with it were the boobytraps and puzzles that lined that Doc’s house. While one or two would have been acceptable, the large amount of them (especially the final cartoonish one) take away from the the epic feel of the characters’ meeting.

The second story, while quite a bit shorter, was the stronger of the two. First off, seeing a younger Doc Brown is a very nice treat, as that’s a period that’s rarely been explored in BACK TO THE FUTURE expanded universe media. Secondly, the inclusion of a real historic figure in Oppenheimer and  the the confirmation of Doc Brown’s involvement in the Manhattan Project (a concept that’s been discussed by the producers and fan community for many years) give this story an epic scope.

Characterization is always an issue in comics based on licensed properties, but BACK TO THE FUTURE #1 gets its characters completely right. This isn’t a surprise, since the Co-creator/co-writer of the film series, Bob Gale is a major force behind the book. Gale gets story credit for both parts, and co-scripting credit for the Marty/Doc story, and it shows. Marty, Doc, and Needles are all perfectly in character with their familiar film portrayals. The second story feels *slightly* less familiar, but that could easily be attributed to it’s only pre-existing character being a younger Doc Brown. 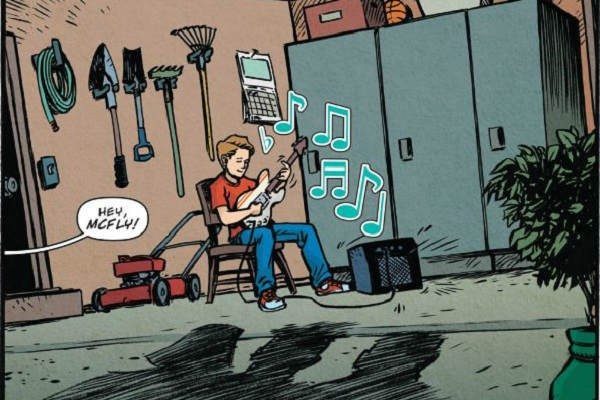 The major failing BACK TO THE FUTURE #1 is in it’s artwork. Much like characterization, art tends to be a controversial topic when it comes to licensed works. I tend to think that the best two approaches are either faithfully capturing the look of the actors, or faithfully capturing the energy and personalities of the characters. Unfortunately, Brent Schoonover’s pencils in “When Marty Met Emmett” do neither. His Marty looks nothing like Michael J. Fox, nor does he convey any of the attributes associated with Mart Mcfly. His Doc Brown fares a bit better, but in the end looks way too cartoony. Dan Schoening’s art in then”Looking For A Few Good Scientists” story plays much better, but is still nothing to write home about.

Overall, I would recommend BACK TO THE FUTURE #1 to die hard fans of the franchise, who should be able to look past the deficiencies in the art and enjoy the canon-friendly stories it tells.

Did you enjoy the first issue of the BACK TO THE FUTURE comic, or have any feedback on this review. Please let us know in the comments below, or on Twitter @Comicsverse!

Check out more from Brian!