This week in comic book history we’re going to look at the original story of Captain America and his first adventure with the Avengers members in AVENGERS #4 by Stan Lee and Jack Kirby from 1964. It’s a classic origin story that quickly goes off the rails and becomes ridiculous. Let’s analyze that, shall we?

Captain America has long been one of Marvel’s most iconic characters. From his initial debut as a Hitler punching, Nazi ass-kicking, all-American hero, to the troubled hero we see fighting other superheroes in the new CAPTAIN AMERICA: CIVIL WAR movie, Cap has always been a premier hero for Marvel. Much of this has to do with the adaptability of his origin story. The tale changes slightly from author to author, but the premise of Steve Rogers being found in a block of ice and revived lends itself to constant evolution and adaptation. No matter what decade comics write Captain America’s origin in, Steve Rogers is still a man with a lost life who doesn’t fit into the new society that surrounds him. This quagmire allows him to take an honest perspective on the world and question things that we today pay no matter to just because that’s how we’ve always known life to be.

READ: Interested in more of Jack Kirby’s work? Check out our analysis of NEW GODS #1!

One huge difference that is instantly noticeable in comics from this time versus today is the amount of talking the author does directly with the reader. On the very first page, Stan Lee goes out of his way to say that whoever owns this comic should keep and cherish it. The man knew how to sell and when you realize you have just written a classic piece of fiction, you have to give the people a heads up that they’re holding a whole lot of future money. As fun as moments like that can be, there was also a tendency in comics from this period to describe every single scene in every panel. The artist rarely had a chance to let their art tell the story. The below page is a very prominent example of this type of storytelling. 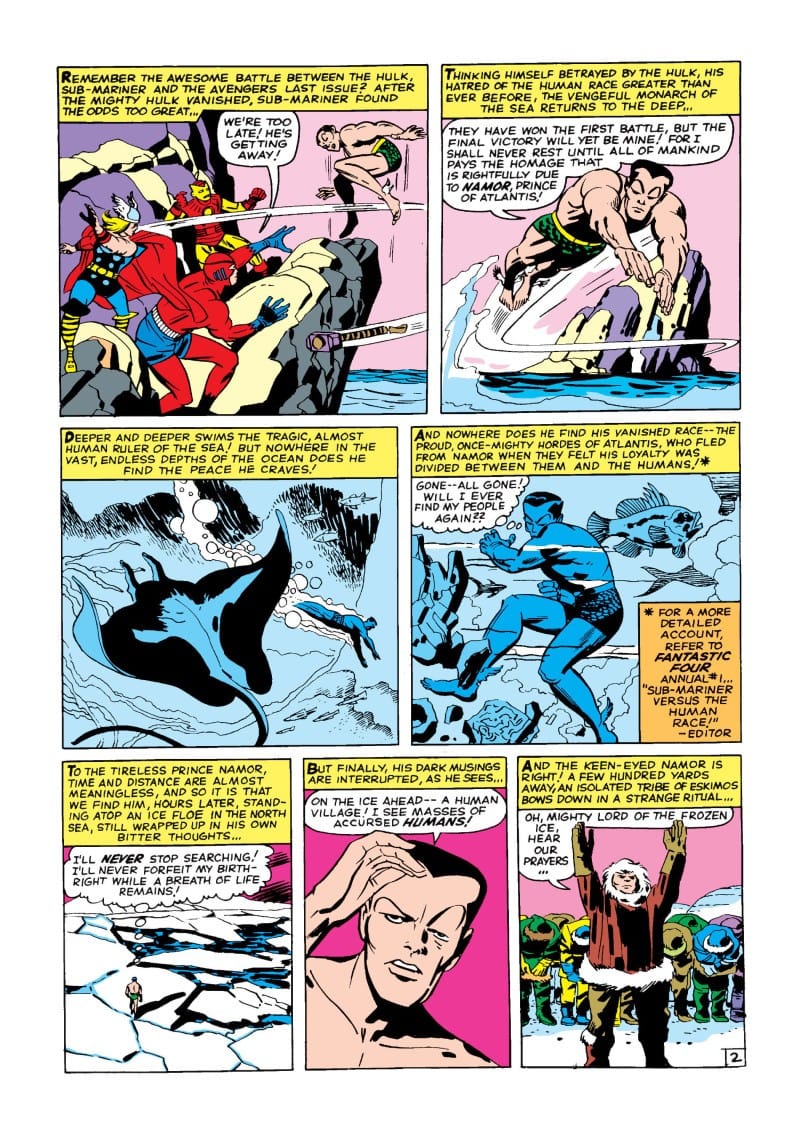 However, the story is still a lot of great silver age fun. The story opens with Namor in a rage after his defeat at the hands of the Avengers from the previous issue. In his mission to try and find a spot to center himself, Namor finds himself in the north sea where a group of Eskimos is worshiping a block of ice. Apparently, nothing makes Namor angrier than Eskimo religion. His reaction to this is completely over the top, but it helps drive home the point that Namor’s a jerk. He grabs the block of ice and hurls it into the sea. The block of ice (spoiler alert?) turns out to have Captain America in it.

READ: Eve wonder what happened to that Stan Lee guy? Check out our look at his top 10 cameos!

Simultaneously, and by a HUGE coincidence, the Avengers members are cruising through the ocean when they see Steve Rogers floating lifelessly. This issue is our first look at the Avengers members in this issue and their very early characters model. For example, Iron Man’s mask has slits cut out of it for his eyes and his mouth, but all this does is make Iron Man look really sad. It seems like he just wants someone to give him a hug, but not one of the Avengers members seem to care. 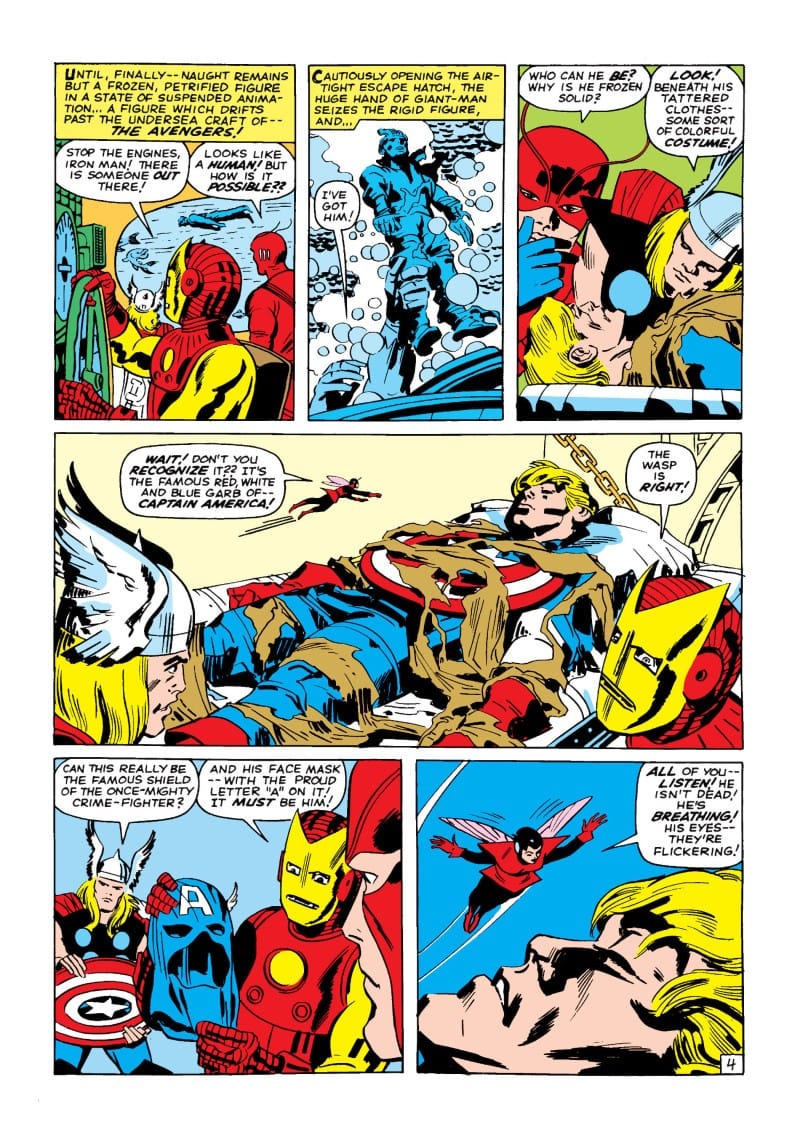 After some hard detective work, the Avengers memebers realize the man with the flag painted on his shield and the A on his mask is Captain America. The Iron Man of the 60s hasn’t become the unstoppable genius we know him as today. He was dumb sometimes. Cap wakes up and naturally freaks out. His last image is of losing Bucky and when he awakens he instantly relives that trauma. Moments like this shows why bringing Bucky back to life was inconceivable for decades. That is Captain America’s greatest failure and one of the key pieces of his character that keep him from being a guy who just punches people who don’t agree with his views on what America should be. It keeps him from being Donald Trump.

We learn Bucky died trying to stop a plane with a bomb on it. Cap tries to help but falls off the plane and just accepts death. Unfortunately, he gets frozen just in time. 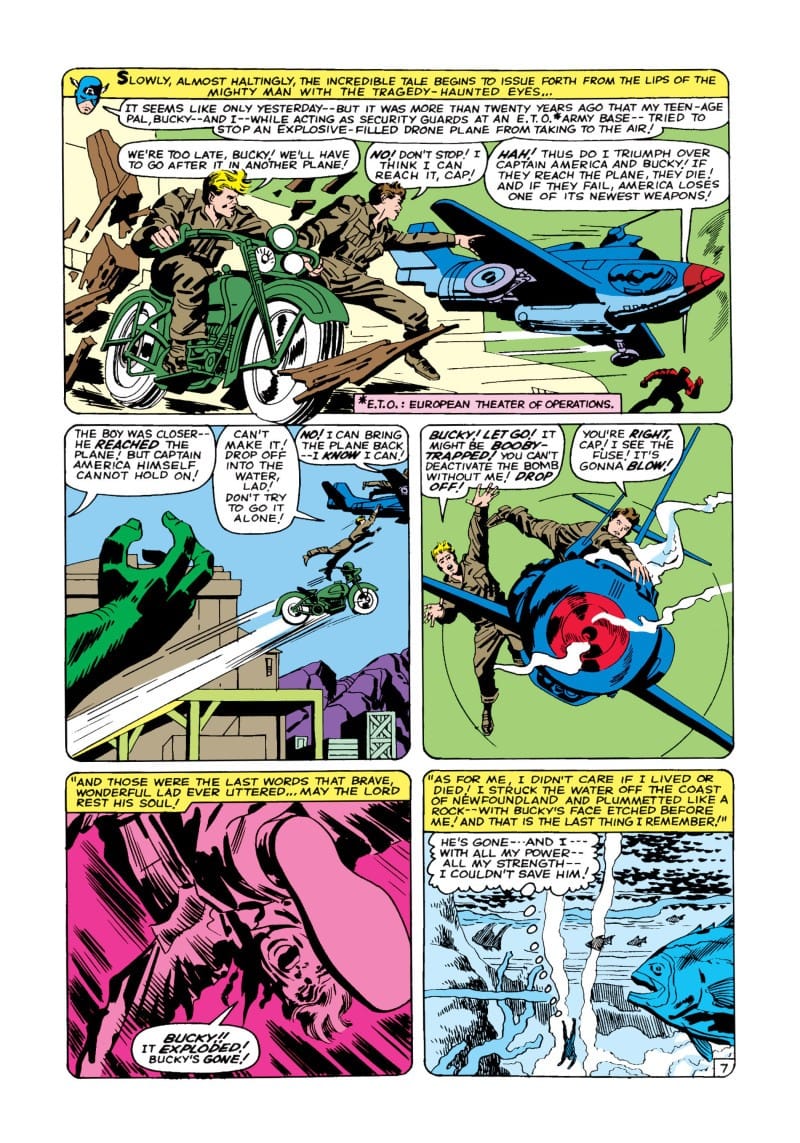 Back in present day 1963, a group of reporters waits for the Avengers members to interview them about their battle with the Hulk and the Sub-Mariner. It’s at this point that the story goes from a fabulous character origin to absolute insanity.  The Avengers members instantly turn to stone. For some reason, all the reporters assume these statues were just built that very moment by the Avengers so the team could avoid interviews. The thought never occurs to them that the Avengers members are the statues. It’s weird.

Luckily, Cap took his sweet old time getting out of the Avenger submarine and avoided turning into a statue. Showing no real initiative to help the Avengers members, Cap makes the brave decision to grab a hotel room and takes a nap, only to be awoken by the Hulk’s sidekick Rick Jones. Yes, the Hulk had a sidekick. Everyone needed a sidekick in the 60s. It didn’t work out though considering one of the Hulk’s main character traits is he’s a loner. Being a sad loner with a best friend is hard! 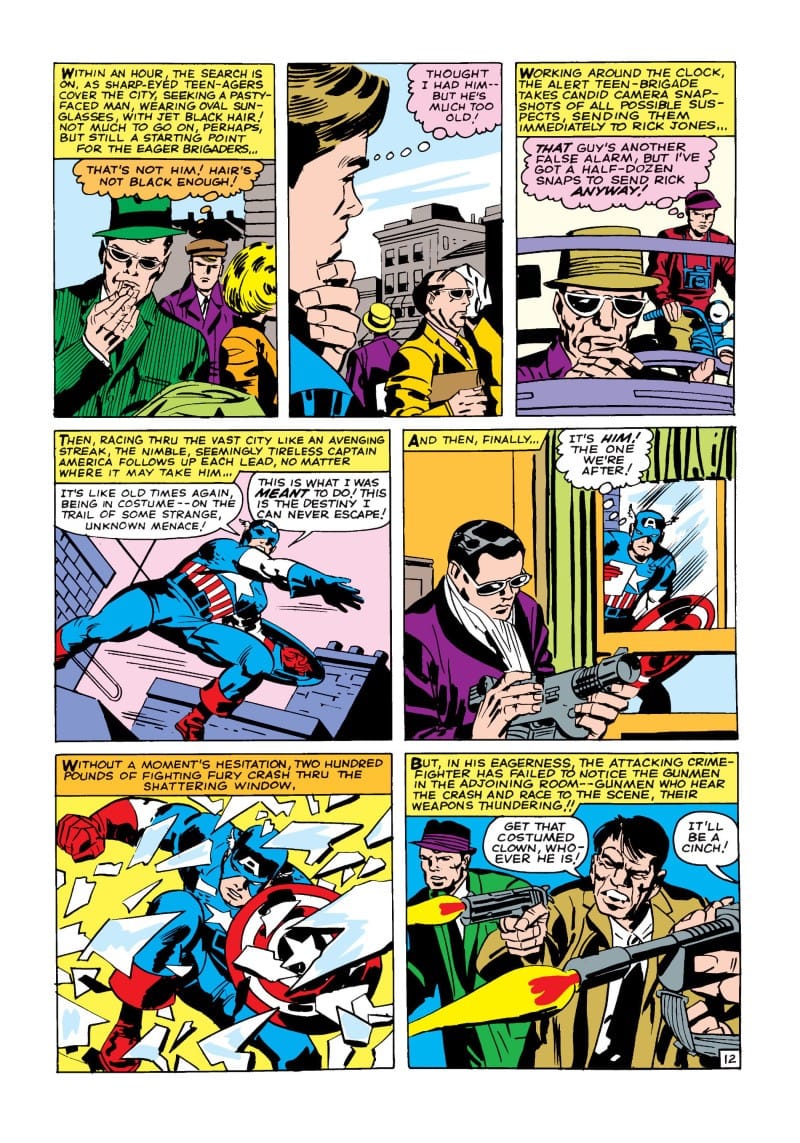 With the help of Rick, Cap discovers that a man posing as a journalist had a gun that turned the team to stone. The two then go on the hunt, and Cap finds the culprit hanging out in an apartment with a gang of thugs. Being a well-trained war machine he quickly dispatches them and unmasks the man who petrified the Avengers members, and that man turns out to be– alien celery? I don’t know how else to describe it. You’ll have to see for yourself in the image below. It was the last thing I ever expected to see. 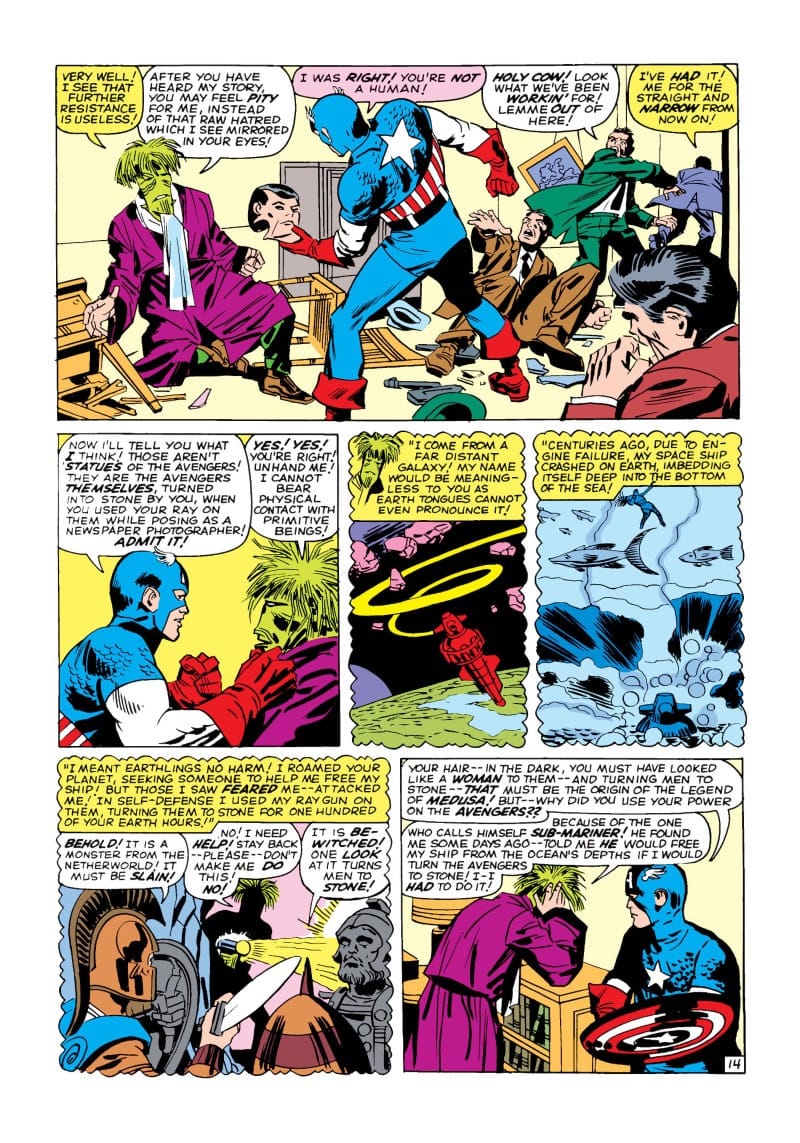 It turns out he crash landed on Earth centuries ago and has been turning people to stone ever since. He also turns out to be the inspiration for Medusa. This is a cool historical connection that makes a lot of sense with his ray gun that turns people to stone. He un-petrifies the Avengers, and the team heads to the Arctic his sunken ship.  This upset Namor because he’s still brooding around. He jumps the team and starts beating the hell out of Iron Man.

The Avengers members rally, defeat Namor, and the celery alien takes his ship and goes back home. Everyone is happy except Rick Jones who can’t decide if he wants to leave the Hulk and become Cap’s sidekick or not. But hey, Rick Jones isn’t important. This is Captain America’s story, and what a great origin it is. That is, until the celery alien ruins it. The parts before that though? Classic.