INFINITY WAR’s major themes are built around the ideas of love and sacrifice. It asks whether we value the universe or the things we love more. It asks us to question whether we’d be willing to make the tough calls to what we need to do. Several AVENGERS INFINITY WAR characters deal with this very issue and each one comes to a different conclusion on how to deal with this problem.

Are The Children of Thanos In INFINITY WAR Underwhelming and Underutilized?

Also if you did not realize, this review will be packed to the brim with SPOILERS! 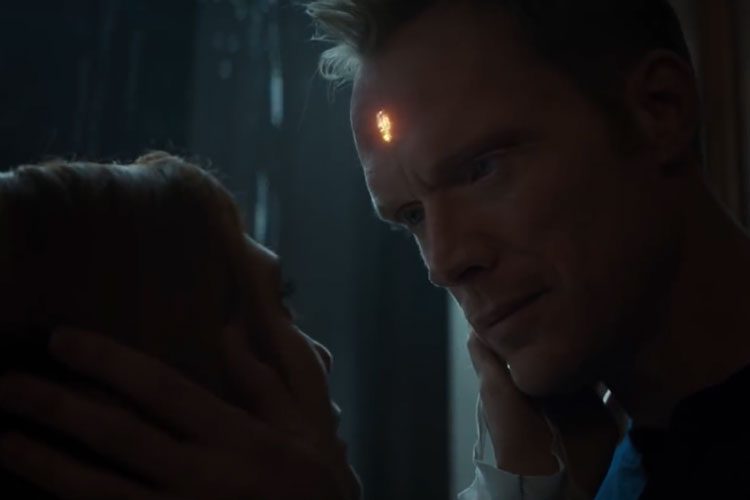 Fans had predicted Vision’s demise in INFINITY WAR for some time. As the bearer of the Mind Stone, Vision is indirectly in Thanos’ crosshairs. The twist is that, like the fans, Vision sees his death coming from miles away. As the most rational of the AVENGERS INFINITY WAR characters, he suggests a logical solution to defeating Thanos: destroy the Mind Stone.

Vision, inspired by the sacrifice of Captain America in World War II, is willing to do what’s necessary to ensure Thanos does not win. However, the Mind Stone can only be destroyed by the very same power of the stone… a power that only Scarlet Witch commands. Vision realizes that it has to be Wanda, his love, who will destroy the Mind Stone and kill Vision.

It is the love between Vision and Scarlet Witch that proves to be the world’s undoing. If Wanda had not loved Vision so much, perhaps she would have found it in herself to destroy the stone earlier. Wanda’s love for Vision proves to be her undoing. Vision meanwhile suffers a struggle between his rational duty (to the Avengers and the safety of the world) and his irrational emotional desires (his love for Wanda and his desire to have a life with her).

There is no question that if Vision and Scarlet Witch had put aside their feelings early on and acted rationally, they would have stopped Thanos. Wanda was unwilling to kill the person she loved to save the world and the consequences were dire. Now that’s what I call a tragic romance!

One of the most powerful and quieter moments in INFINITY WAR is the scene when Gamora tells Peter Quill that he may have to kill her to save the universe. It is a beautiful scene because it is the first time we have seen these AVENGERS INFINITY WAR characters outwardly reciprocate their love for one another. Nonetheless, there is a such a melancholy air in the film.

Will the Guardians of the Galaxy Save The Marvel Universe In Infinity War?

You can see Peter struggle to even address Gamora’s plea. Throughout Peter’s life, he has been emotionally stunted by the early death of his mother and his difficulty with father figures. Now the person he loves most in the world is asking him to kill her. That pain is too much for Peter to accept. Peter’s instinct is to run from that pain. He tries to dodge his feelings with jokes. Yet when Gamora tells Peter that he is “the person she loves most” he realizes that he cannot run from this.

The moment comes when Peter needs to kill Gamora after she is captured by Thanos. To quote Okoye, Peter “freezes” and fails to take advantage of the element of surprise of killing Gamora. It’s this hesitation that allows Thanos to realize Gamora’s plea. While Peter finally decides to kill Gamora, it is too late and Thanos prevents the deed. Peter was too afraid to experience the pain of loss that he ran away from it. It is ironic that despite his hesitation, Gamora still dies and Peter still loses everything.

Doctor Strange very early on in the film tells Iron Man that “he had the choice between saving him, Spider-Man, or the stone, he would save the stone every time. Like Vision, it is this cold rationality that makes Doctor Strange feel superior. He is willing to do what’s necessary even if it makes him cold and calculating. Strange puts the protection of the mystic arts and the universe above any of his human desires.

Unlike Tony Stark or Peter Quill whose emotions lead them to make unwise decisions, Doctor Strange makes judgments free of emotion. He thinks of himself as clear-minded and willing to make the tough calls. That all changes when Doctor Strange looks into the future 14 million times and discovers the 1 way the AVENGERS INFINITY WAR characters can defeat Thanos. He realizes that the only way they can defeat Thanos is one through immense sacrifice.

Doctor Strange serves as the prophet of INFINITY WAR. He foresees a future where the Avengers can win but realizes it is a road filled with loss and sacrifice. In sacrificing the Time Stone and his own life (for now), Doctor Strange paves the way for eventual victory.

Thor was a lot of people’s favorite character coming out of INFINITY WAR and I understand why. He was one Thanos head away from having a hero arc in this film. We also forget, since Thor is such a funny character, that he has lost everything he cares about throughout the movies.

He lost his mother in THOR: THE DARK WORLD, his father and his kingdom in THOR: RAGNAROK, and then even before the title screen of AVENGERS INFINITY WAR, Thor loses half of his people, his best friend, and his newly reformed brother. We can definitely say that the last few years have been rough for the God of Thunder.

However, Thor doesn’t waste any time concentrating on his angst. Instead, he takes all of his pain and his rage and he fashions it into a weapon — Stormbreaker. Thor understands sometimes heroes have to sacrifice in order to find success. This is incredibly apparent when Thor endures the pain of a star in order to allow Eitri the Dwarf to forge Stormbreaker.

Thor sees the bigger picture. He is resolute in killing Thanos and so he does not mind sacrificing in order to achieve his goal. Thor would have succeeded too if previous AVENGERS INFINITY WAR characters on this list had not screwed up so fantastically.

Whereas Thor had an incomplete hero’s arc in this film, Thanos, the villain, underwent a complete hero’s journey. This is the reason that Thanos succeeded when all of our favorite heroes failed. That is because Thanos sacrificed more to succeed than the other AVENGERS INFINITY WAR characters. Thanos was willing to do whatever it took to win whereas the Avengers were not prepared to make the ultimate sacrifice.

Thanos’ Motives: From The Page To INFINITY WAR

We see this most of all when Thanos is forced to kill a person he loves in order to obtain the Soul Stone. Thanos realizes he must kill Gamora if he is going to succeed. He realizes, like Thor, that he has to lose everything if he wants to attain his goals.

After Thanos snaps his fingers and succeeds in erasing half the life in the universe, Thanos visits Gamora’s spirit with Responds “everything.” Thanos won at the end of INFINITY WAR but whether the price was worth it is an answer only he can say for himself.

AVENGERS INFINITY WAR takes a nuanced stance on the themes of love and sacrifice in INFINITY WAR. On the one hand, classical heroic tales contain moralistic stories picking themselves up by the bootstraps. These heroes are willing to put their love aside and endure pain in order to save the world.

In the cases of sacrificing love, it is never clear what the right answer is. It is for each of us to determine how much we are willing to sacrifice. Thanos was so goal-minded that he was willing to extinguish the things that he loved. On the other hand, Many of the AVENGERS INFINITY WAR characters embrace love above all.

Does this make them less heroic? I don’t think it does. It’s an impossible question that has no correct answer. Even Thanos may be second guessing whether it was worth it in the end. Only you can say what is right.