AVENGERS #677 gives us even more clues and mysteries! The Grandmaster has returned, but who is his opponent? As the Avengers barely escape death at the hands of The Black Order, chaos continues to ensue the Earth and its inhabitants. Will this ragtag team of Avengers be enough? All of these inquiries are put forth in part three of “No Surrender!”

The Properly Paced Plot of AVENGERS #677

Quicksilver takes over narration duties in this issue. It seems as though each issue gives us a different narrator. I like this quite a lot, as it gives us different perspectives from the various Avengers showcased in “No Surrender.”

It seems as though Quicksilver is going to attempt to save the day from the hands of The Black Order, but it’s quickly determined that he cannot even save himself. Who will save the Avengers? Why, how about the newest (oldest) member, Voyager? Within milliseconds, Voyager teleports the Avengers to a secret HQ Tony Stark set up in AVENGERS #13! This utilization of such an old location shows that Al Ewing, Mark Waid, and Jim Zub are trying to make this “No Surrender” a true accumulation of Avengers storylines.

The Inclusion of Grandmaster 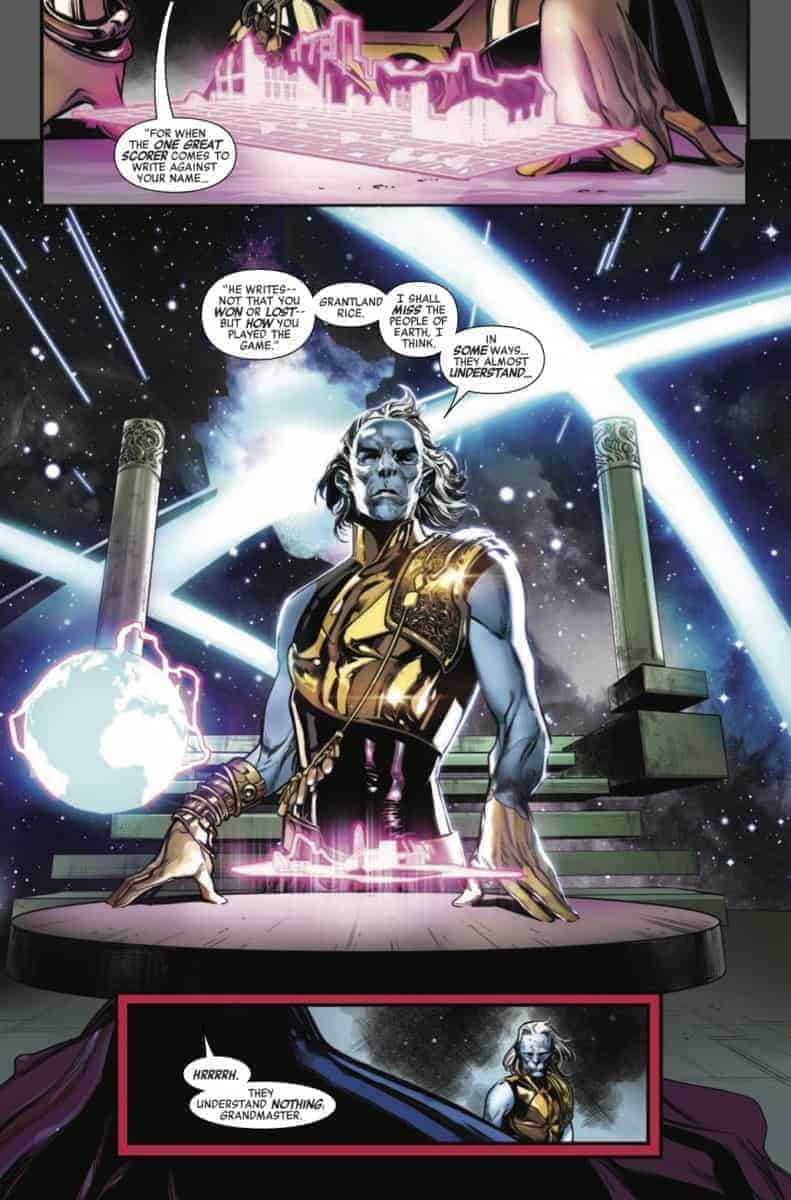 After a bit of debate, strike teams form when Tony reveals chaos in Peru and Rome. The chaos in these areas is a result of Grandmaster and his opponent, who appears to be orchestrating these strange changes of events. It’s safe to assume these were, in fact, the blue and red narration bubbles from AVENGERS #676. What’s more interesting? The choice of the Grandmaster. With AVENGERS: INFINITY WAR just around the corner, I cannot help but wonder when Thanos will make an appearance. And the relationship he has with the Grandmaster is a tad tumultuous.

Back to the plot: the strike teams head out and do their best to help civilians and to battle with The Lethal Legion. The Avengers appear to be losing drastically, causing a frustrated Quicksilver to head to Rome despite Rogue’s testament of not wanting him around her squad. As Quicksilver rushes into battle, Scarlet Witch and Brother Voodoo release Vision from his blue casing. It’s unclear how successful this will be, but simultaneously Quicksilver succumbs to the mysterious blue coating. The issue ends with him about to be pummeled by The Lethal Legion’s Blood Brothers.

AVENGERS #677 is a thrilling issue. The introduction of Grandmaster makes this feel like a classic AVENGERS tale. I enjoyed hearing Quicksilver’s narration as well, as he is a character attempting to redeem himself. The banter between him and Rogue adds a lot to the character development of this issue. While the battles feel a bit rushed (especially with Quicksilver rushing into battle!), it allows the plot to develop without too much delay and get the story rolling.

Even with the story rolling so quickly, many inquiries arise. For example, we hardly learn any more about Voyager. Ewing, Waid, and Zub also make us, the reader, assume she’s been with the team for years and years. Then, there’s the side plot involving Beast, Wasp, and Jarvis. Will Jarvis survive? We seem only to be getting one to two pages of updates each week.

It’s undoubtedly good we’re left wanting more. There’s nothing like turning the last page of a comic and being disappointed by the end of the immediate story.

I will say that I do wish characters had more to say during battle. I’m surprised by the lack of banter during the main battles. Shouldn’t there be questioning? Their internal questions allow us, readers, to receive more information. Hopefully, more revelations about The Lethal Legion occurs in upcoming issues.

The Artwork of AVENGERS #677 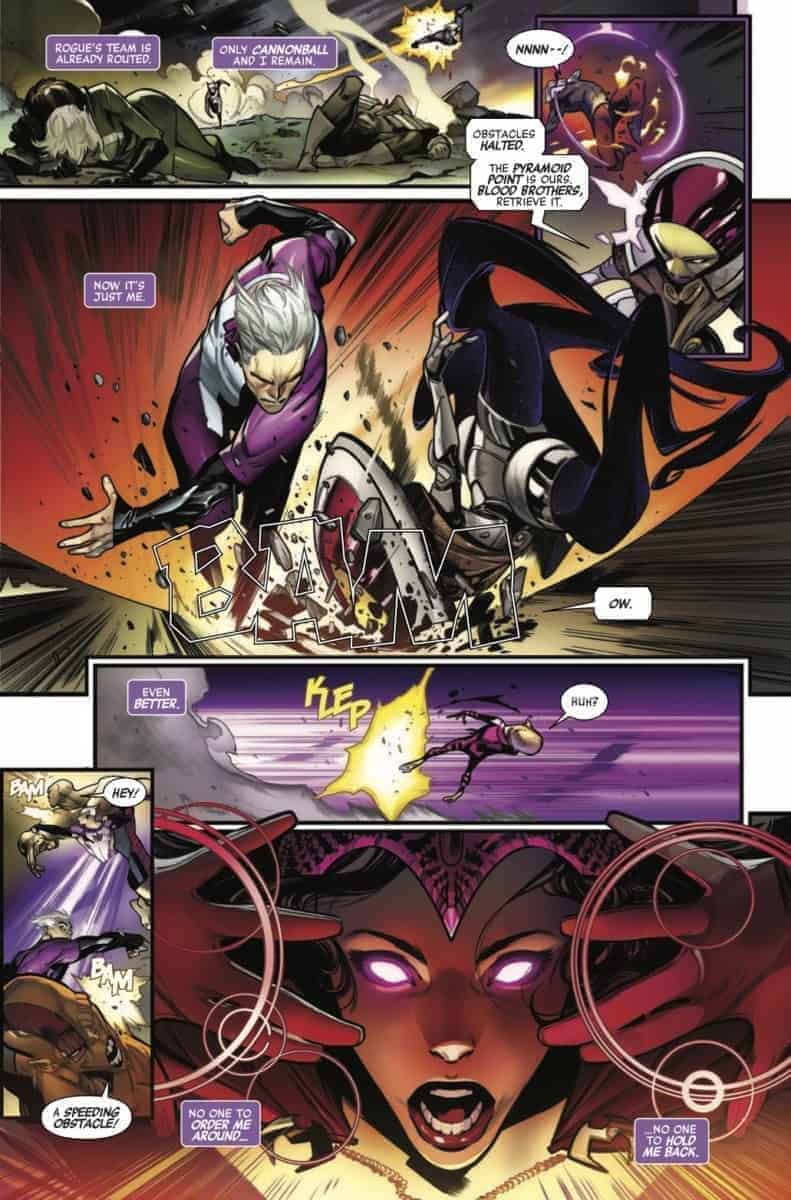 Pepe Larraz and David Curiel continue to shine with their artwork. I’ve talked about how much I enjoy Curiel’s colors in previous reviews, but it’s worth noting how brilliant his portrayals of each character are. They all stand out so uniquely. Even when simply crowded around a command room, they stick out. But when in battle, this boldness in color allows them to stand out and makes the battle easier to follow for the reader. Even though Larraz’s spacing and battle sketches can be a bit chaotic, Curiel alleviates this with his choice of hues.

And that’s not to negate Larraz’s work; in fact, his facial structures convey emotions very clearly. His proportions in each scene make panels very manageable. I’ll be sad to see this art team disappear come February, though I’m sure the style won’t change too dramatically with an art switch.

AVENGERS #677 appears to be hitting its stride. Ewing, Waid, and Zub seem to be a cohesive team of writers, and it’s clear they all care deeply about the characters they’re working with. I’m hoping that “No Surrender” continues to give us surprising reveals. However, the real success will depend on the handling of Voyager and impact Grandmaster and his opponent have on Earth. Will this be a story that has true repercussions? Or will it end in the sun rising once again for Earth? Hopefully, next week’s issue gives us more information and plot to work with!