In case you missed it, writer Jason Aaron recently assembled what is effectively the most powerful Avengers team in quite some time. Not to mention the team just moved into a new home, Avengers Mountain (which is the massive corpse of a Celestial). A team like that in such a home needs some kind of management team, right? Well, in AVENGERS #12, we get to meet the new help for the Avengers.

As it stands, the new group essentially has no support structure to keep them on the up and up. So, AVENGERS #12 sees T’Challa galavanting around the world in search of a new team to help manage the Avengers’ affairs. T’Challa finds someone to handle security, data management, covert ops stuff, etc.

Jason Aaron takes what would normally come across as an expositional dump of an issue and turns it into something enjoyable. To be certain, it’s likely the weakest issue of his run thus far, but that really doesn’t mean much. AVENGERS #12 is still a solid read. It’ll undoubtedly be well worth your attention down the road when all these new team members come into play.

Artists Ed McGuinness and Cory Smith work in a similar way that Aaron does; their art is simple, yet turns what would normally feel like a very plain issue into something worth gawking at, if only briefly. Their artwork isn’t baffling, but it completely fits the tone of AVENGERS #12.

AVENGERS #12 opens with a reminder of who the OG Avengers’ assistance was. Jarvis makes a wonderful guest appearance and apparently sends T’Challa on his little goose chase. And, as all these heroes essentially become a part of T’Challa’s new taskforce, they’re aptly named the Agents of Wakanda.

T’Challa’s first stop is to recruit Gorilla Man, who acts as the head of security in Avengers Mountain. Following that, we’re reintroduced to Janet van Dyne as a covert ops member of the team. If you recall, during AVENGERS #10 (#700), we saw Janet saving Blade from a pack of vampires. Clearly, Janet’s role in the new Avengers team goes a lot deeper than one or two solo missions. 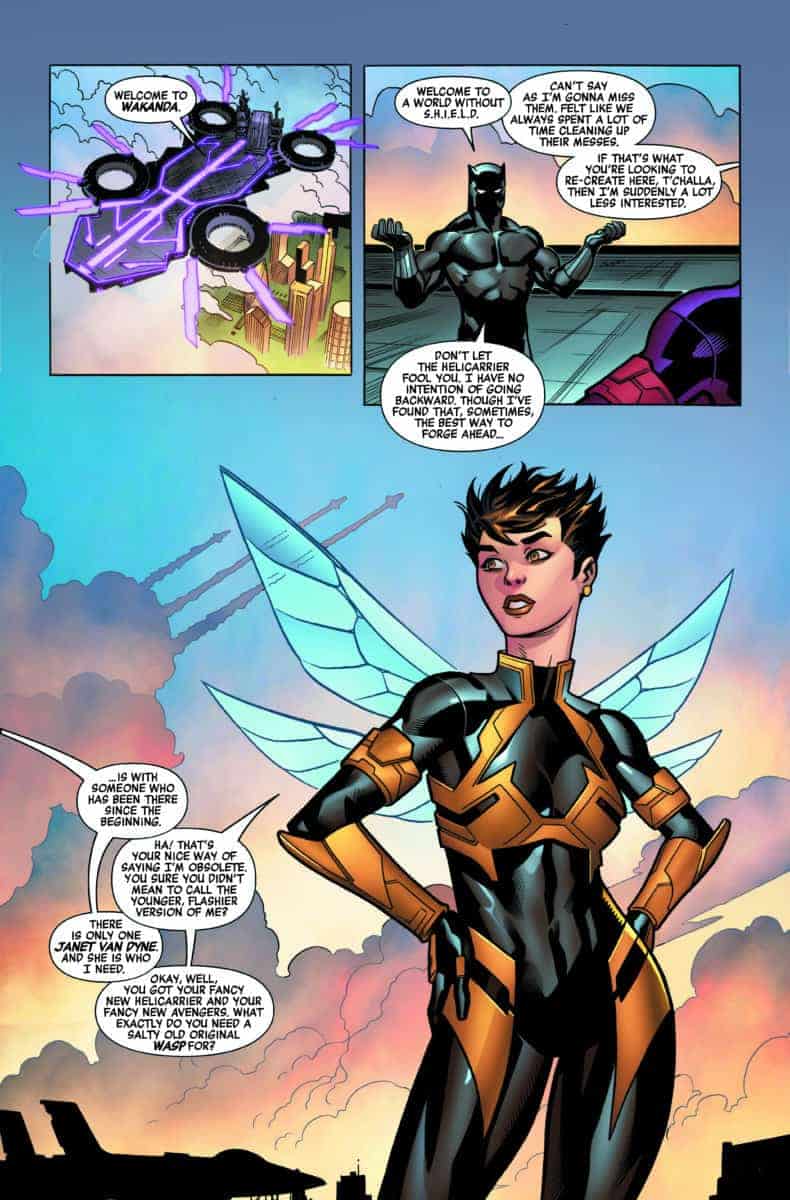 T’Challa puts Okoye in charge of commanding the new help, which also includes Ka-Zar from the Savage Land. As a test, Ka-Zar has to infiltrate Atlantis for reasons. The mutant Brood alien named Broo is put in charge of system and data management; John Jameson aka Man-Wolf is seemingly a space operative; and Morbius the Living Vampire is brought in as well, likely to assist with this looming vampire threat.

The last batch of newcomers to the Agents of Wakanda include American Eagle, Dr. Nemesis, and Fat Cobra. I wouldn’t worry too much about not knowing everything about these characters. These are all guys who’ve slightly fallen into obscurity lately. But, leave it to Jason Aaron to go against the grain like that, right?

AVENGERS #12 finishes off with a bang, officially inducting Blade as the newest member of the Avengers. And if this isn’t the best way to reintroduce Blade, then I don’t know what is.

At first glance, AVENGERS #12 felt a lot like a massive data dump. We’re introduced to a bunch of new and/or obscure players with not much explanation to who they all are and are sort of expected to just go with it. And frankly, I’m very okay with that. I like it when writers take a chance and aren’t constantly holding my hand. Plus, I’m willing to bet Aaron will take the time to explain a lot of these guys a bit further later down the line, and I’m fine with waiting.

What keeps AVENGERS #12 from coming across as a boring expositional lump is how fast-paced and jovial everything feels. Aaron doesn’t waste time giving us too much background on each of the new guys, and thus he’s able to fill this issue with more fun scenes and world-building material. At its heart, that’s what AVENGERS #12 is; it’s another world-building issue. Which, again, I’m very okay with. 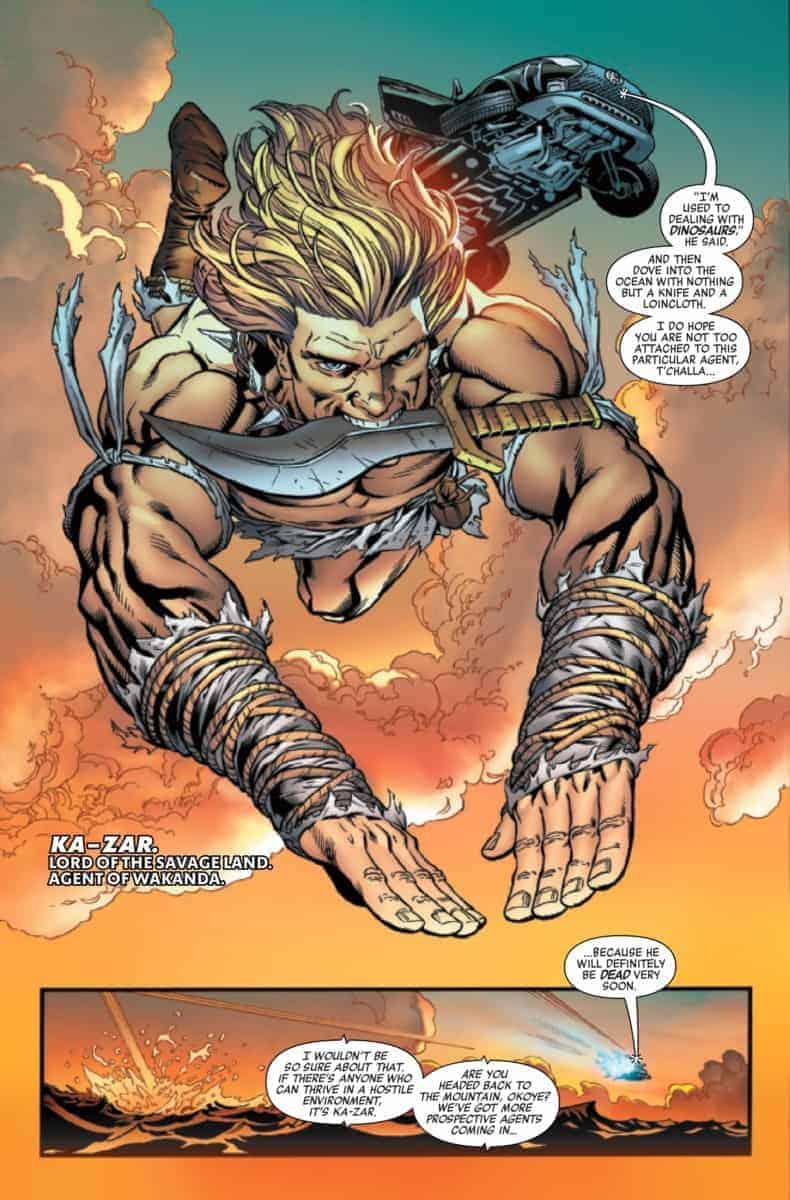 AVENGERS #12 is also a very necessary issue. When you think about it, the Avengers just moved into an extraordinarily massive new base with absolutely zero help to manage the place. If Aaron had completely ignored this aspect of the story, I probably wouldn’t have thought to complain about it, but now that it’s been brought to my attention, I’m really glad he took the time to address it. Because, seriously, there’s no way the Avengers themselves were going to manage the entire corpse of a Celestial.

Aaron once again proves why he’s the guy who should be writing this book right now. AVENGERS #12 is far from groundbreaking, but it continues to build-up to the looming vampire war, which I’m all for. Plus, Blade’s an Avenger now, which is awesome.

Another reason AVENGERS #12 is certainly worth reading is the art. Again, it’s nothing stellar, but the tone and quality of McGuinness and Smith’s art completely fits the story being told. The cuts between the two different styles is hardly noticeable, which also helps everything flow effortlessly.

AVENGERS #12 also features some exceptional color work. Erick Arciniega completely pulls through in this issue, helping McGuinness and Smith to expertly craft a plethora of different environments and sequences.

Honestly, my only minor gripe is with how Okoye is drawn. She just looks weird, like Smith couldn’t draw her consistently. On the flip side of that, though, is how humorously epic he makes Ka-Zar look. That’s a good thing, though. I definitely want more comedic Ka-Zar, both in terms of storytelling and artistic representation. 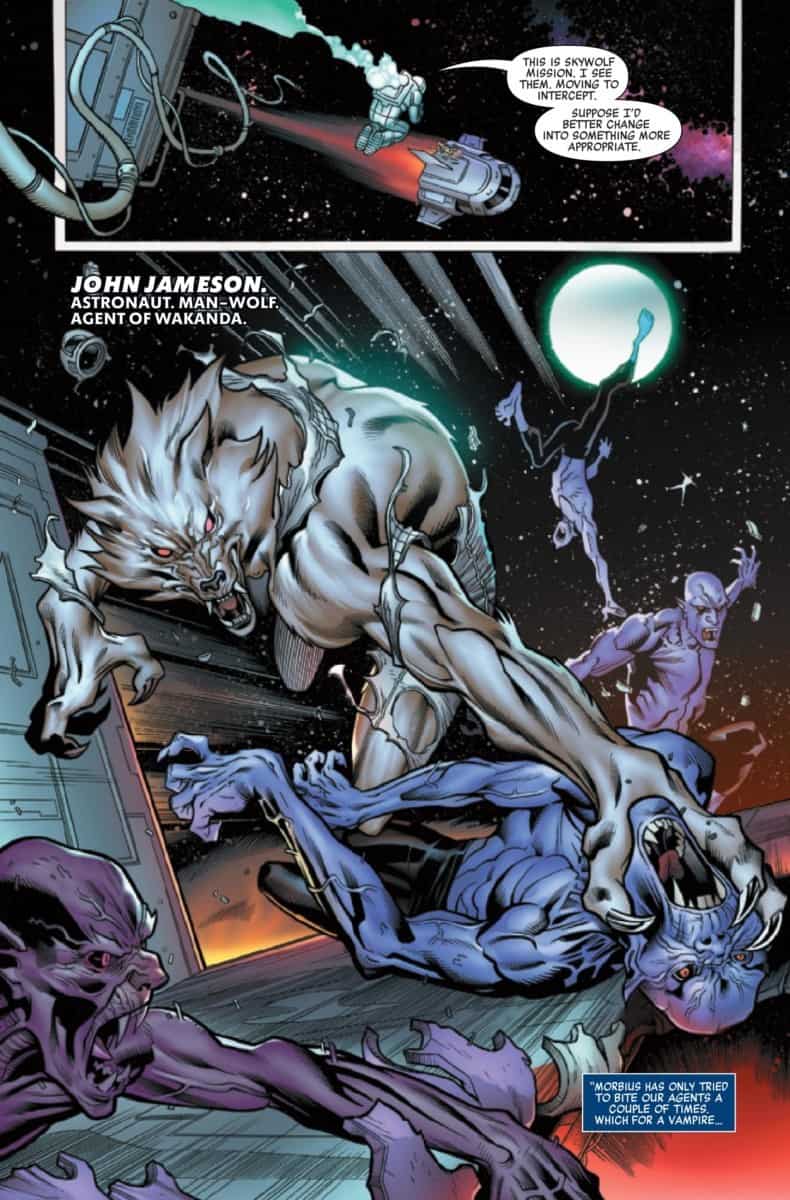 Overall, this is an artistic duo I’d enjoy seeing return to AVENGERS. McGuinness has more than proved himself given his work on the first six issues, plus a few extras, and Smith is on his way to finding his niche in this run.

Give Me Vampire War!

For the past couple of issues, Aaron has been teasing at some sort of civil war in the vampire kingdom in Transylvania. For a while, I was certain the vampire aspect of Marvel was dead, minus what little DEADPOOL touched upon it. But, again, leave it to Jason Aaron to bring old bits of Marvel lore back from the dead. All the more reason to love his run on AVENGERS.

AVENGERS #12 is a very necessary issue. Aaron takes the time to establish a new support system for the team, and it’s definitely worth reading about. AVENGERS #12 is fun when it probably shouldn’t be, both in terms of content and presentation, and that’s awesome. I wouldn’t complain at all if we had a few more issues featuring the Agents of Wakanda.

Speaking of presentation, McGuinness and Smith deliver yet another fantastic-looking issue. AVENGERS #12 isn’t the best looking in the bunch, but it’ll absolutely suffice. Their combined artistic flair, coupled with Arciniega’s colors, make AVENGERS #12 a subtle gem in a sea of much larger, flashier gems.

Now, we’ve got a vampire war and Blade as a freaking Avenger to look forward to!