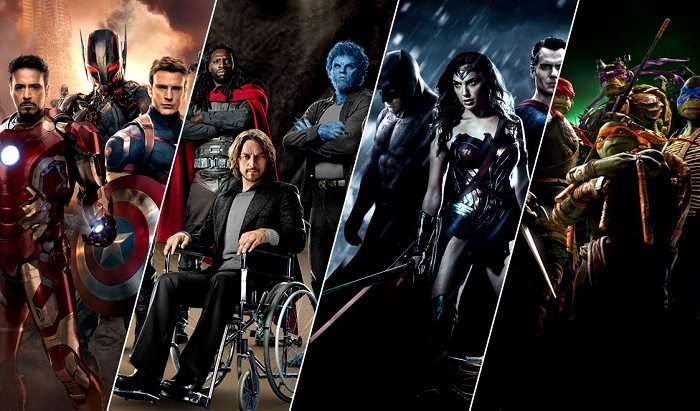 (Warning! This piece contains a couple minor spoilers. Read at your own risk.)

The saying goes that “there’s nothing new under the sun.” For proof, look no further than your local movie theater. These days, it seems like mainstream cinema consists almost entirely of sequels, prequels, remakes, and adaptations. Now and then, an original idea manages to slip through the cracks, but the majority of Hollywood Blockbusters fall into one of these four categories.

Don’t believe me? Just look at the highest grossing films of 2016 (domestic box office). Of the top ten, only two films (ZOOTOPIA and THE SECRET LIFE OF PETS) can be considered “original,” and both of them belong to the well-worn sub-genre of “animated kids movies with talking animals”.

Before we go any further, let me make it clear: just because a movie is an adaptation, possesses a familiar concept, or is part of a larger franchise, doesn’t mean it lacks creativity. Nor is this trait reflective of the film’s overall quality. I’ve actually seen many of these top-grossing films, and I consider most of them (with the exception of BATMAN V SUPERMAN and SUICIDE SQUAD) to be coherent, competently made and often entertaining. I don’t have an issue with the individual films that this trend has spawned. I have an issue with the trend as a whole.

I believe that this Franchise Frenzy has exacerbated Hollywood’s “play it safe” mentality. It is responsible for a slew of bland popcorn flicks that are targeted towards the lowest common denominator. While these movies are not inherently bad, they are often lacking a distinct voice or personality, making them feel more like mass-produced products than actual films. It’s a trend that favors brand recognition over individuality and cultural diversity.

Money Makes the Reel Go ‘Round

Making a blockbuster is a risky endeavor. It costs hundreds of millions of dollars just to get the film made. In many cases, it costs just as much to advertise it. It’s a precarious investment with no guaranteed payout, but studios attempt to limit the risk by choosing projects with a high probability of success. This is why the current cinematic landscape is overrun with sequels, remakes, and adaptations. Unlike original ideas, these projects come with a prepackaged fan base. They’re safe bets; films likely to turn a profit.

READ: Are you a movie buff? Check out our picks for the best films of 2016!

Hollywood has always lived by a golden rule: If something sells, milk it till the money runs dry. Studios have always latched on to popular genres, churning out the same kinds of films until the market becomes over-saturated and people lose interest. This is what’s called a Genre Cycle, and we are currently in the midst of a big one: The Comic Book Craze. So what makes this current trend so special? There are two major factors that set this cycle apart: An increased focus on foreign markets and the advent of the interconnected “Cinematic Universe.”

America dominates the film industry. This is a fact. While many foreign countries have released countless cinematic masterpieces, Hollywood films are the most financially successful. Just look at the Global Box office for 2016, a list dominated by American productions. The top ten are all Hollywood flicks and only two foreign films managed to squeeze into the top thirty. How is this possible? Well, America has had an edge in film production since the end of WWII. To this day, Hollywood films have the largest budgets, with more financial backing than any foreign production company could possibly muster. This allows for superior special effects and large scale spectacle. In addition to this, Hollywood has recently made several attempts to appeal towards foreign markets.

Wonder why the casts in big budget blockbusters have become more racially and ethnically diverse? THE MCU, STAR WARS, FAST AND FURIOUS: These franchises feature men and woman of different backgrounds in prominent roles. On one hand, it’s great to see an increased focus on groups of people who have traditionally been underrepresented in mainstream American cinema. But make no mistake, this decision is motivated by money. Behind the camera, Hollywood is still predominately staffed by white men, especially when it comes to top level jobs (directors, writers, producers and studio execs). The diversification of onscreen representation in big budget blockbusters is merely an attempt to appeal towards a broader audience.

READ: Are you a STAR WARS fan? Read our Review of ROGUE ONE!

Then there’s story. Modern Blockbusters tend to focus on stories with universal appeal. Typically, these are simple tales of good vs. evil (heroes vs. villains, Jedi vs. Sith, etc.).  These films rarely touch upon complex themes (and if they do, it’s usually in a shallow manner) or any topics that may be considered controversial to foreign audiences. These stories also tend to avoid bloodshed or nudity in order to maintain a PG-13 rating, which expands the audience and increases the chance of success. This year, DEADPOOL demonstrated that an R-rated Superhero movie can actually be successful, which may lead to more mature blockbusters in the future. But don’t expect Iron Man to start blasting villains into bloody chunks, as this would go against the Disney-Marvel brand.

One Universe, One Brand

The shared universe approach is becoming rather popular with Hollywood Blockbusters. This structure has now been adopted by both the DC and STAR WARS franchises. However, Marvel Studios may be the most successful example of a shared Cinematic Universe thus far. The MCU has successfully created one gigantic franchise made up of several smaller film series, each of which are successful in their own right. This structure has paid off tremendously, as the MCU is now one of the most profitable Franchises in Hollywood history. It is a global phenomenon, and much of its popularity is due to successful branding. Audiences know exactly what to expect: family-friendly, crowd-pleasing fun. But, this dependence on brand recognition is not without its flaws.

Brand Recognition is one of the most important aspects of any Shared Universe. All films within said Universe must possess a uniform style and tone. Otherwise, you’re left with a mishmash of awkward, disjointed elements. But there is a downside to a completely cohesive universe. It can strip a film of personality or voice. All of a franchise’s installments can begin to feel identical, almost as if the writers and directors are completely interchangeable. As much as I love the MCU, it is often guilty of this crime. Think about it. They had Edgar Wright on board for ANT-MAN. Edgar Wright! The writer-director for some of the greatest comedies of the last few years (THE CORNETTO TRILOGY and SCOTT PILGRIM VS. THE WORLD). But his vision didn’t mesh with the rest of the MCU, so Wright and Marvel Studios parted ways.

READ: Interested in the Superhero genre cycle? Check out this article about X-MEN: APOCALYPSE and the dangers of CGI!

How about the rest of the MCU? Honestly, of all the films I’ve seen, only three of them had any real personality. AVENGERS was packed with that signature Whedon wit. GUARDIANS OF THE GALAXY was infused with the strangeness, originality and humor that only James Gunn can deliver. And finally, IRON MAN 3 is not only a true Shane Black movie, but it actually subverts expectations by completely changing the Mandarin’s character and taking Tony Stark out of the suit for the majority of the film. These movies took risks and they truly felt unique. The rest of the MCU films feel a little too similar. They aren’t bad movies. They offer some fun action sequences and a fair amount of laughs; however, overall, they’ve been safe, generic and mostly forgettable.

But the MCU isn’t the only shared universe that is limited by brand recognition. STAR WARS is a prime example of how storytelling can be limited by a studio’s dependence on branding. When it was first announced that the STAR WARS franchise would intersperse its main trilogy with stand alone films, I was excited. Even more so when directors began signing on to these projects. J.J. Abrams, Rian Johnson, Gareth Edwards, Phil Lord and Chris Miller: These are filmmakers with wildly different sensibilities, and I was excited to see how these diverse visionaries would interpret the STAR WARS universe. So far, they haven’t given us anything new.

To be fair, I have thoroughly enjoyed the recently revived STAR WARS franchise, but these films aren’t exactly breaking new ground. I didn’t mind that THE FORCE AWAKENS told the same story as A NEW HOPE. I was hoping this was an attempt to get all the fan service out of the way before starting a new story. Then I saw ROGUE ONE and I began to worry about the future of this franchise. As much as I liked the film, its story is hindered by brand recognition.

It feels like Disney is unwilling to change up the formula too much. Sure, ROGUE ONE has a darker tone than most films in the series, but it takes every opportunity to awkwardly shove in some reference to the original films. I was constantly pulled out of the experience by unconvincing CGI recreations of famous characters (Grand Moff Tarkin and Princess Leia) and cameos that offer nothing more than cheap fan service (Vader, R2-D2, C-3PO, and the Mos Eisley Cantina thugs). It’s almost as if Disney was afraid you’d forget this was a STAR WARS movie. These additions feel like the result of studio interference rather than part of a director’s artistic vision.

What Does it All Mean?

Hollywood has always been a business. But now more than ever, it treats films like equations: If you plug in the right variables, you’re guaranteed to make money. There are no more risks. I miss the old days when studios took chances on blockbusters like JAWS, JURASSIC PARK, BACK TO THE FUTURE,  GHOSTBUSTERS, INDIANA JONES, and the original STAR WARS. These films proved that art and commerce can truly coexist.

Now it feels so… mechanical. It’s as if there’s no humanity. Once in a while, a truly great Hollywood movie comes out like GUARDIANS OF THE GALAXY or THE AVENGERS. Films that feel like the passion project of a living breathing human being, not the product of some corporate committee. But sadly, most main-stream American films feel like cynical cash grabs aimed to please as many people as they can. This is the cinematic equivalent of processed junk food. It might taste good, but it leaves you feeling empty inside.