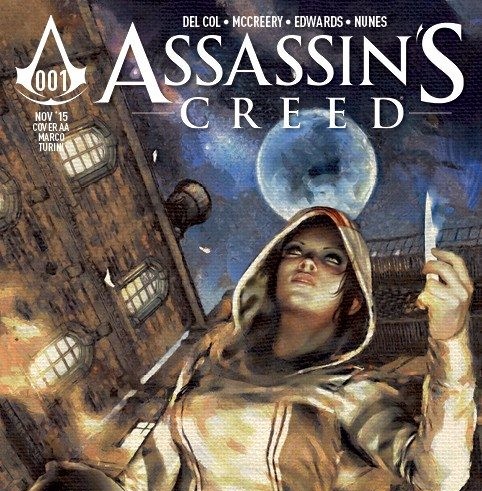 Inspired by the best-selling UbiSoft video game of the same name, ASSASSIN’S CREED looks to expand that world with a brand-new story.

The only thing Charlotte de la Cruz has a handle on in her life is an immersive video game experience named Helix. What she learns in a violent flash is that Helix is more than just a game, and her skills have drawn her into a war centuries old. She doesn’t put up a fight because she believes she has nothing to lose, but what if it costs her her life? 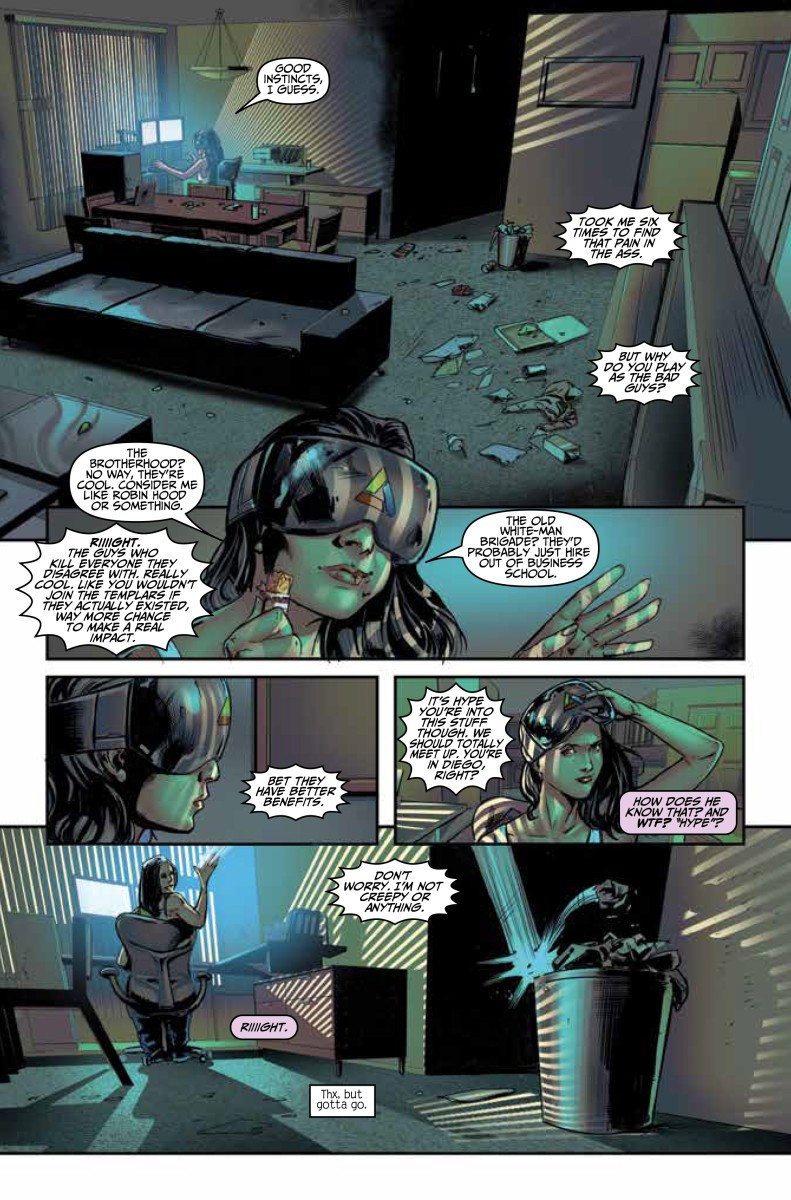 ASSASSIN’S CREED was one of those video games I enjoyed experiencing more than I did playing. Granted, I only ever played, let alone completed, the first one, so maybe the gameplay became more compelling as the franchise went on. Even so, the mythology of it, the concept of it, fascinated me, so when Titan Comics and Ubi Soft announced they were publishing a comic book based at the video game, it goes without saying I was intrigued. For the most part, my curiosity was rewarded.

To its credit, ASSASSIN’S CREED #1 wastes no time. Maybe it’s urgency from this series being only five parts; maybe it’s confidence from having a well-established brand; maybe it’s flat-out confidence, or maybe it’s a combination of all three–whatever the reason, things kick off in a hurry. We’re introduced (or in the case of fans of the game, re-introduced) to the idea that immersive video game technology exists, and very quickly after that introduced to the idea that the game’s protagonist, Charlotte de la Cruz, is extremely experienced and capable with the technology. Shortly thereafter, we learn playing that game might be the only thing she’s good at: Charlotte’s clearly smart, but she’s got a massive chip on her shoulder that causes her to sabotage her own job interview. 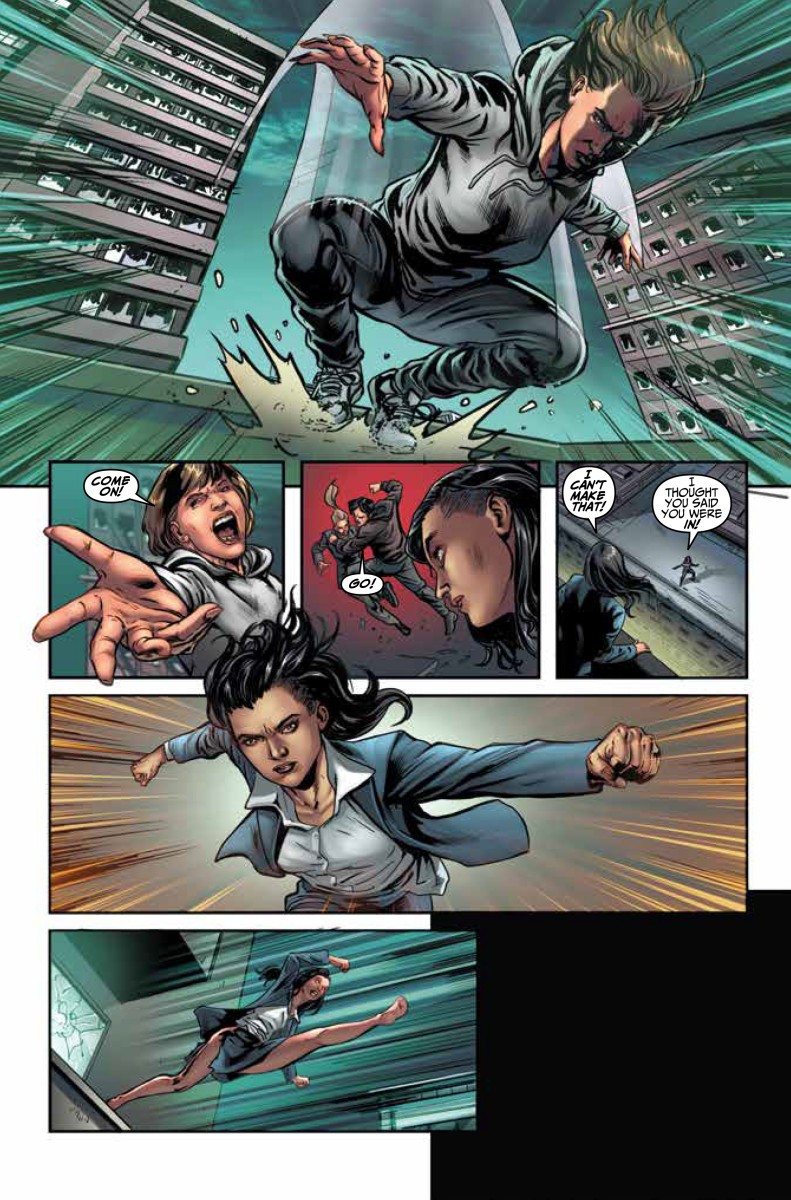 One page later people have broken into her house, more people break in after to try to kill her, and the first group of people save Charlotte’s life.

The cost is that some characterization may be a little forced, and some exposition may be jammed into places here and there, but, for the most part, the pace is engaging and kept me turning pages.

It helps that the art–and therefore the action–is competent and confident, everything rendered crisply and clearly, with all the information you need, and nothing you don’t. The character designs and art-style aren’t exactly gonna blow anyone away with their originality, but it’s all consistent and effective. To me, that’s more important. Bold, unique styles are great, of course, but sometimes that’s a hard balance to strike. UbiSoft and Titan clearly care about this book being done well, and it’s a vote of confidence that they opted for effectiveness over flash. 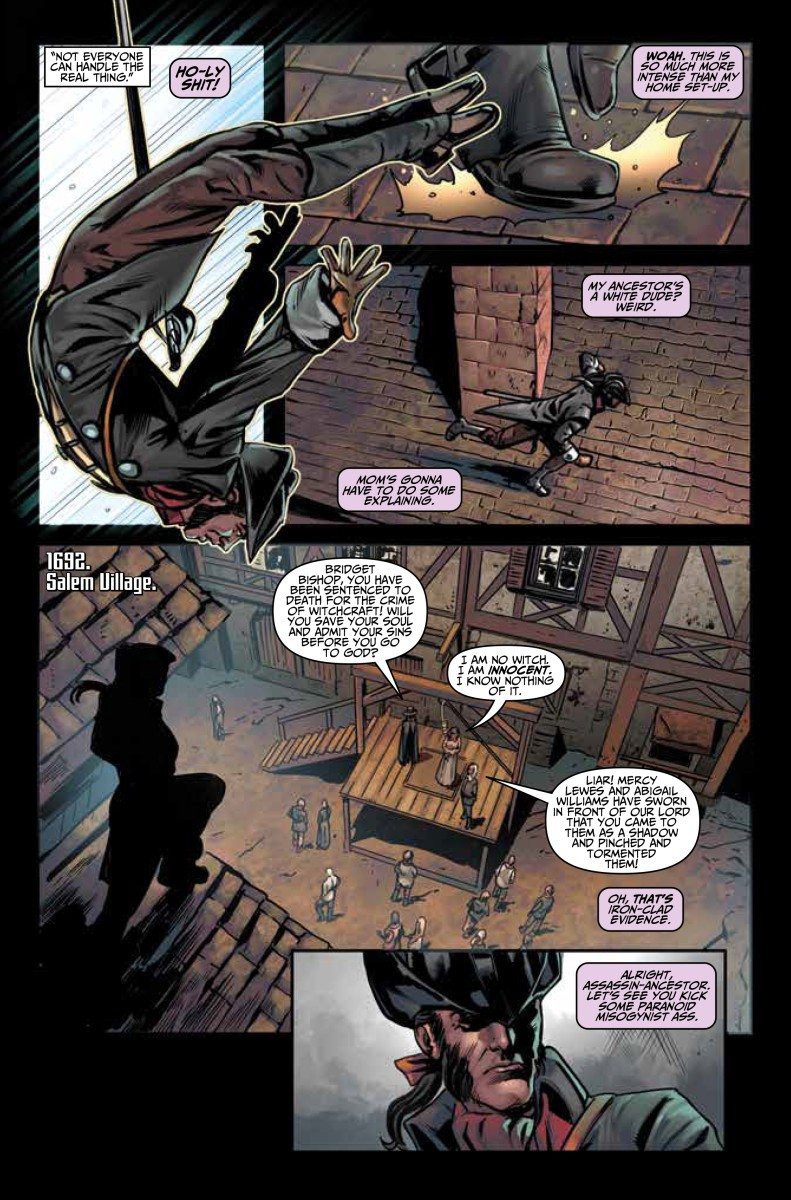 Don’t get me wrong, though: there are some great panels (check out the preview pages throughout). This isn’t a boring book.

The thing is, because things unfold so quickly, and Charlotte voluntarily jumps in the deep end, there isn’t a lot of time for newcomers to catch their breath, and that may be off-putting. Charlotte isn’t your typical wide-eyed, naive, needing-obvious-exposition-to-explain-things-to-her protagonist. While that’s generally a good thing, there isn’t a lot of help in terms of digesting this world and its mechanics. Things that are old hat to fans of the series (jumping into the Animus, syncing with your ancestor’s memories, what happens when you desynchronize, etc.) may be a little hard for newbies to digest–especially when everyone in the comic is already on board and diving straight ahead. It reminds me of Shane Carruth’s time-travel movie PRIMER: no time was spent explaining things to the audience, and everyone was really smart and knew what they were doing. The dialogue and style were so intriguing, however, that the audience (at least I was) is eager to be on the outside looking in, trying to figure out what’s going on.

I can’t say with certainty that ASSASSIN’S CREED #1 achieves the same level of success. There’s a lot to like here, and the stage is definitely set for an intriguing, action-packed, and satisfying series, but that may be limited to the built-in fanbase. That said, everyone should at least check it out. ASSASSIN’S CREED #1 is on shelves October 14th.