It goes without question that LGBTQ creators add much-needed diversity to the world of comics. One such writer-artist is Ashanti Fortson, a non-binary Mexican-American from my home city of Baltimore. While all of their work is worth checking out, their biggest project is GALANTHUS. The best way to sum up this webcomic is by asking yourself what would Image’s SAGA look like if it were more down-to-earth and filled with friendships and queer couples? GALANTHUS is the answer to that question and so much more. It is a brilliant culmination of well-written characters against the backdrop of a classic space odyssey.

READ: Need more LGBT+ webcomics? Check out the top 10 must-reads from across the internet!

GALANTHUS follows the thrilling adventures of Farah and the crew of the titular spaceship. Farah finds herself aboard this ship when she escapes employment at an intergalactic factory. She, with the help of the Galanthus’s Captain Seo, stows away inside a crate of fruit. From there, she meets the motley crew of the Galanthus: a human boy named José, a huge jellyfish named Doc, and, my personal favorite, an adorable lizard-woman named Arimian who mothers the entire crew. 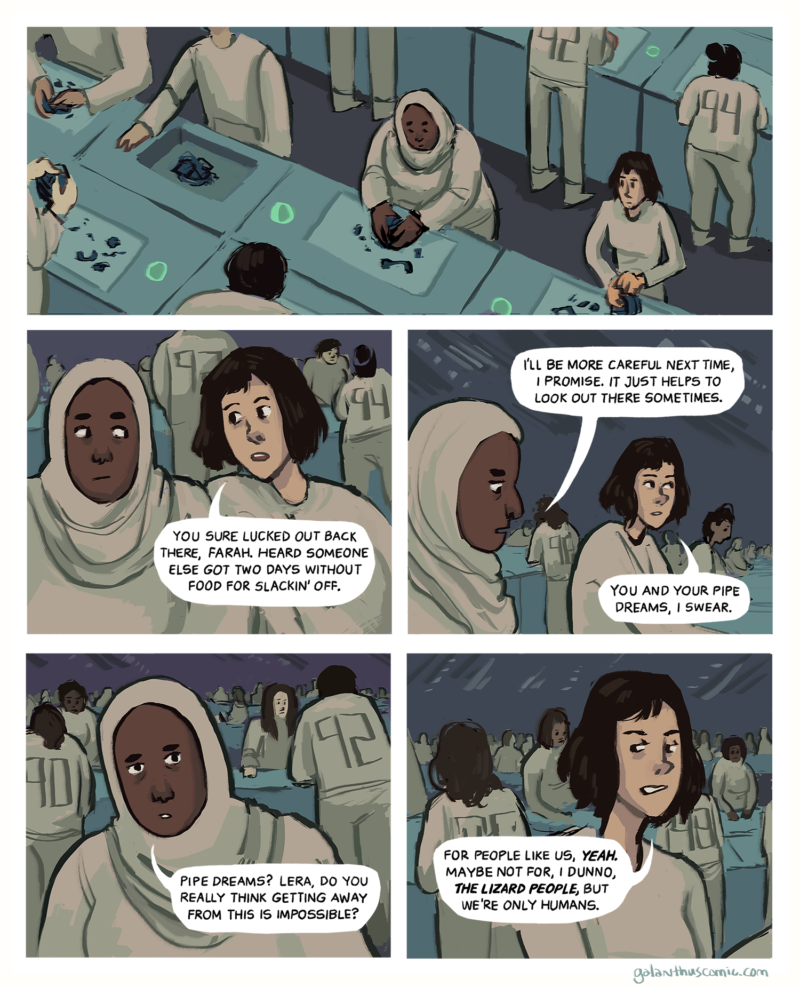 The crew appears to be smugglers of sorts, carrying cargo to various planets in exchange for information. Although the story may seem to just be the ship’s adventures through space, the prologue implies Farah is closely tied to some ancient secret in the galaxy. With only 72 pages out, the plot has yet to reveal itself.

Farah’s character is the most developed aspect of the comic. I like how the creator lets the fact that Farah is Muslim and has a different body type than those that commonly appear in media go without much fanfare. Farah is never defined by these traits. After all, Farah has other traits: her technical capabilities far outshine everyone else’s. She fixes computers and uses her brains to escape high-security systems. Farah is more than just some runaway.

Farah’s also a character with a visually represented love interest. The reader sees Farah’s feelings for a girl, Lera, in a dream sequence. This is the same girl who we see earlier dismiss Farah’s grandmother, thus making their relationship understandably strained. After all, Farah’s grandmother was the only family Farah knew. Therefore, when she died, Farah struggled with navigating that pain. As such, Farah merely wants to live in a loving community. This is a very sympathetic character drive. 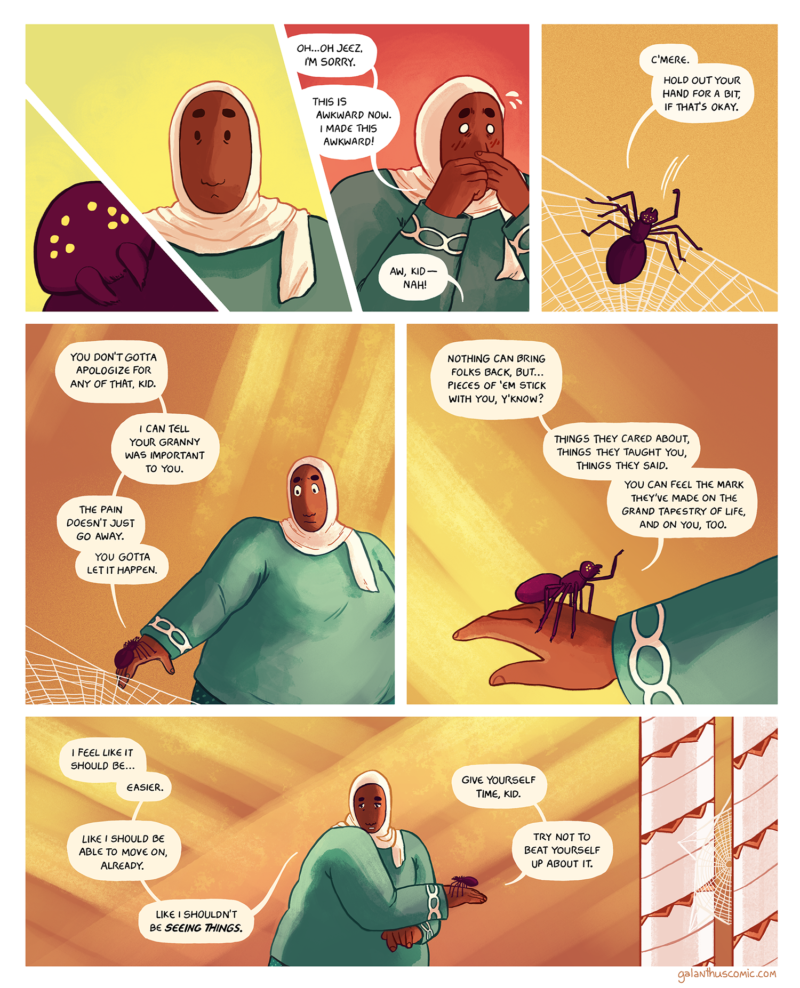 While never explicitly stated, the outburst between Farah and her friend in the factory shows that she must keep some trauma from the death of her grandmother internalized. Farah seems to have bottled up that pain instead of talking about it with those around her. While no timeline exists to dictate how quickly people process trauma, emotions must be processed. I’m glad this comic chose to talk about this and let us relate to the protagonist through her pain.

READ: Looking for some more intense LGBT+ stories? Check out our SUNSTONE review to find out more!

Out of This World Views

Fortson’s style best fits under the label of cute. Each of the characters has soft edges, which makes them seem a lot more open than the design of typical comic characters. The colors in the comic are also stunning. Instead of space being a dark void, Fortson fills it with blues and purples. Merely through the composition of their work, Forston makes the universe appear as a lived-in place.

Furthermore, the desert planet and the factory show that Fortson knows how to make each location appear unique and vibrant in its own right. There’s no sense that these places came from nowhere. It’s obvious that clear and careful planning went into each aspect of their creation. Even little things like the shading on the inside of a temple make the space feel alive and vibrant. The world of GALANTHUS no longer feels imaginary, instead teeming with life.

GALANTHUS: A Webcomic Worth Following

Ashanti Fortson’s work is without a doubt a “celebration of wholehearted optimism, the power of kindness, and vibrant, colorful sci-fi.” Sometimes, it’s nice getting to read a story where diverse characters get to simply exist and not suffer horrendously for being themselves. GALANTHUS is an endearingly hopeful comic — and one created by someone from Baltimore! Which, I must admit, still remains a huge draw for me. With comics like Marvel’s SECRET EMPIRE showing off cynicism, I’m excited that comics like GALANTHUS exist. GALANTHUS shows that hope should never go away even in troubling times like ours. In the end, like GALANTHUS’s crew, we’re all just flying through space, hoping to find a place where we belong.

Is GALANTHUS your kind of read? Check it out right here!