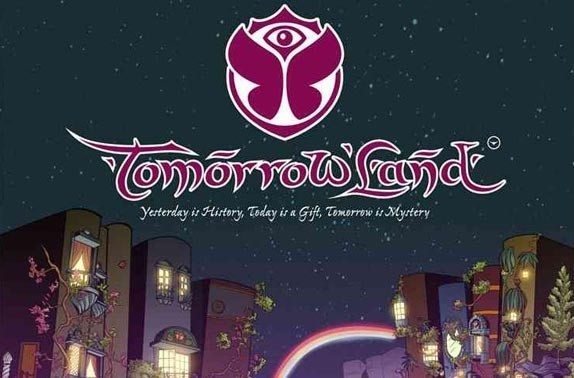 A few days ago, while I was on a train returning to New York City, I had the absolute pleasure of starting out 2014 with what I felt was a profound experience through literature.  Very few comic books have the power to not only summon forth a reader’s emotions, but to have a substantial moral to their story.  In the shuffle of superhero titles and extended graphic novels, pieces like “Tomorrowland” by Paul Jenkins can fly under the proverbial radar.

Do yourself a favor- if you’re a lover of the artistic, DON’T let this one fly under the radar.

Paul Jenkins has always been courageous with his writing; his work on “Peter Parker: Spider-man” saw a plotline in which it was revealed that the Chameleon was in love with Peter Parker, and his work on “Wolverine: Origin” helped to create a definitive history for the character.  His bold choices and great ability to develop rich and compelling characters are part of the driving force in his writing.  That’s why it is so refreshing to see Jenkins take on the new characters, and really the whole universe, of Tomorrowland.

The story unfolds over the backdrop of the Tomorrowland music festival, a real-world international music festival that places world-renowned musical artists onstage in a fairy-tale world.  The entire festival, from start to finish, is a surreal trip through a storybook, as the environment is redesigned each year, keeping the guests constantly on their toes and at the height of their senses as they witness giant heads (the mouth of which is the DJ booth), humongous books (with turning pages), giant mushrooms (think Alice in Wonderland), and various other props… seeing the photographs of the festival in the book, the word for it is simply “magical”.

And this is the environment in which Jenkins sets his characters.  Two of these characters are real people: Dmitri Vegas and Like Mike, two music producers who have gained immense popularity through their efforts with Tomorrowland.  Past credits also include remixing Lady Gaga, Sean Paul, Mary J Blige, Jennifer Lopez, Snoop Dogg, and many more.  These two brothers are written, as is the rest of the book, incredibly well.

The relationship between the pair is perfectly believable as they undergo the strains of a fraternal relationship. With comic book writing, there can sometimes exist a lack of characterization in the writing- after all, you have the artist’s visual representation.  However, this has always been one of Jenkins’ strong suits- Dmitri and Mike are individuals; though they work together, each has their own distinguishable characteristics, which come to play a major part in the story.  The traits each character have help these characters to be relatable- even if it is simply Mike’s penchant for sandwiches.  Details like this really help to flesh out the characters and make them a bit more three-dimensional in a medium where there has traditionally been a focus on action.

Yet this book IS filled with action.  Our two stars, Dmitri and Mike, are at the center of an inter-dimensional battle between good and evil.  It is explained that all around us exists a world rarely seen by humans, a world where the forces of creativity are at constant odds with the forces of destruction.  Fighting for the forces of creativity are our heroes Dmitri and Mike, the Keepers of the Sound.  They square off against a villain who goes by many names, including The Nameless One, The Destroyer, and, at one point, Legion.  Those of you who have read your bibles may recognize these names as other names for the devil and his fellow demons.

Fortunately for Dmitri and Mike, they don’t have to fight these demons alone.  It turns out that festivals in the spirit of Tomorrowland have existed since the beginning of mankind.  Paul Jenkins says that man’s greatest power is creativity.  We are born bursting with creative energy, and it is through literature, art, music, and science that we use this energy to fight back against the demons.  Hence, any huge gathering in the names of these creative mediums is much like a Tomorrowland.  This means the ancient festivals to Dionysus, in which the Greeks would put on plays for days and days… these, too, were Tomorrowland festivals.  The Shakespearean shows in the Globe Theater- another series of Tomorrowland festivals.

What’s great about this book, as well, is that each of the former Keepers is also timeless… this means we get to see Shakespeare with our heroes.  He’s not the only cameo.  Oscar Wilde gives us a bit of exposition, Jacques Cousteau appears with a giant squid at one point… even Albert Einstein shows up, to the keen observer.  These and many other Keepers unite in their battle against evil.

Despite the various professions of the Keepers, “Tomorrowland” is, at its heart, a story about creative freedom and those who would quell it.  This is symbolized perfectly in the final battle- the Nameless One and his demons take the form of a corporate CEO and his army of bulldozers, ready to shut down and destroy the festival.  The themes throughout the book echo this dichotomy- Artists vs. “The Man”, Passion vs. Money, Good vs. Evil.  Jenkins explores each of these themes deeply in this recent project.

The art completes the story, and does a great job at accomplishing a “show-not-tell” effect- emotions are easily determined from the facial expressions, and the style itself has a whimsical quality that will make you feel as if you’re at the festival. Alti Firmansyah takes an incredible concept and creates realistic characters.  I was also constantly awed by the representations of creative and destructive energy paralleled in the real world. To take a real-world festival and add such otherworldly qualities as demons (and to show simultaneously two independent levels of reality) is a difficult task, but Alti Firmansyah was certainly up to it.  Her art is immersive, and helps to echo the message of the story- creativity a powerful force indeed.

By the end of this story arch, I was 2 subway stops from my apartment.  I got home, picked up my guitar, and just started to play for the next hour or so.  That’s what “Tomorrowland” does to me.  This book is, in a word, inspirational.  It is an action-packed trip to the dimensions around us, and shows us how we, throughout history, really do connect.  Through art and science, the contributions of our ancestors have been passed down.  Both are means of discovering and communicating truth.  I, for one, hope Like Mike and Dmitri Vegas continue to be successful in defending them.