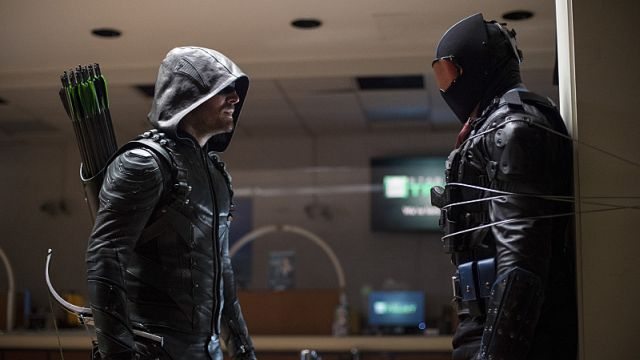 Season five of ARROW appears to be the season to bring back the series to familiar ground and popularity, in terms of pace and street level villains. Though season two was highly acclaimed, seasons three and four were far removed from the series’ niche. Season three was a good experiment treading unknown waters but come season four, ARROW was lost in a rigmarole of a storm. It’s too early to make a final judgment on a season five’s quality, but so far it’s going well.

How To Make Arrow Season 5 Great

One of the great things that ARROW did well was have a villain threaten Oliver’s city. Oliver is Star City’s knight like Batman is to Gotham, and so when Oliver is placed in a world ending situation it seems to spread his capabilities too thin; he’s out of his depth. The Damien Darhk (Neal McDonough) arc would have been more suitable for the CW crossover team or maybe even the Legends because of its world ending properties. Such a plot was excessively heavy for Oliver and Co. to handle. Ultimately, Oliver’s job is to protect Star City even when it means leaving to confront Ra’s from destroying it. Oliver leaving and seemingly joining sides with Ra’s al Ghul (Matthew Nable) was good for team Arrow to strut their stuff and show how they are capable of handling problems without Oliver.

The reason Slade Wilson (Manu Bennett) was such a compelling, layered antagonist was because of his humanity before becoming Deathstroke. We were introduced to Slade in season one’s flashbacks finding himself helping Oliver and then befriending him. The flashbacks helped shape Slade into one of the best villains because there was so mush history built between him and Oliver. By doing that, the writers made the right choice putting Brother Blood (Kevin Alejandro) as the red herring before revealing that Slade was the true perpetrator. What made Slade’s villainy so intriguing was because of how intimate his hate was towards Oliver. Slade wanted Oliver to feel the pain he felt when he let Shado (Celina Jade) die. Similar to how Bane maliciously taunted Batman about destroying everything he loves in THE DARK KNIGHT RISES, Slade wanted to kill Oliver’s family before he killed him, except he was only able to kill his mother, Moira Queen (Susanna Thompson).

The series has used characters that are well-known Batman villains such as Ra’s al Ghul, and lesser foes like Deadshot. However, this season is using a foe called Prometheus. Prometheus is not the same supervillain that we know from comic books as stated by co-creator Marc Guggenheim. Prometheus has a grudge towards Oliver and we do not know who is behind the mask, unlike Slade earlier in the series. Many would think this is a good thing, but we do not know if it would make an impact on the seasonal plot. This makes the fans wonder if he is worthy being a villain this season. For a while, team Arrow was dealing with Tobias Church (Chad Coleman) who stole the stage when he was on-screen but sadly was killed off by Prometheus because of his attempts to kill Green Arrow.

The series quickly replaced Church with another mini-boss The Vigilante/Adrian Chase (Josh Segarra). Most fans may know the Vigilante from JUSTICE LEAGUE UNLIMITED animated series with the Cowboy aesthetic. However, this take is the Vigilante from New Teen Titans Annual #2 by writer Marv Wolfman and penciler George Pérez. Like the comic books, the Vigilante also goes to extremes killing criminals and thugs with no repercussions; kind of reminds you of the Punisher. Hoping the writers keep the Vigilante as a villain for a while would be an interesting test for Oliver, particularly when it is pitting him against his former philosophy of killing. Maybe later this season Oliver can convince the Vigilante in joining team Arrow making them a force to be reckoned with.

Since ARROW is a third of the way into the season this year, it’s too early to tell whether the series will bounce back and reclaim its popularity among the fans. So far, the series returned to basics and implementing small villain arcs for Green Arrow to face. Only thing now is to wait and see if this approach works. The episode did great with the Vigilante being Oliver’s foil and hopefully, the season’s big bad can reach that level of prominence like the Vigilante and Tobias Church, but more importantly, Slade.