ARROW continues its fourth season with an episode that finds the original three members of Team Arrow attempting to deal with their personal issues and the latest threat from the HIVE, while Laurel Lance and Thea Queen continue their quest in Nanda Parbat.

Just like last week, this episode opens with Team Arrow (Oliver Queen and John Diggle only, since Laurel and Thea are off in Nanda Parbat) once again foiling a HIVE attack on a Star City natural resource- this time a lumber mill, rather than last week’s reservoir. However, the operation doesn’t go nearly as smoothly, requiring off-site help from Felicity and ending with the “ghost” operatives’ escape. When Ollie and Diggle return to the lair, Felicity suggest the three go out for some “original team” bonding, but Dig coldly rebuffs the offer, still unable to forgive Oliver for his actions last season. When Diggle returns to his apartment, he finds an ARGUS operative who provides him with the information he’s waited years to hear; Mina Fayad, who ordered the assassination of his brother years earlier, is in Star City.

CLICK: Catch up on the previous episodes of ARROW’s fourth season here!

Fayad is in fact in town to meet with Damien Darhk, and she’s brought a metahuman assassin named Jeremy Tell (AKA Double Down, who can remove tattoos from his body to use as weapons) to eliminate Green Arrow. He in turn lures Ollie into a trap, while Diggle goes off on his own to track down Fayad without telling the others. Both are nearly killed because they didn’t have each other to watch their respective backs, leading Felicity to completely lose her cool. She berates them both for their behavior, and demands they reconcile. Diggle tells Oliver he can regain his trust by helping him take down Fayad.

The two track her down, but find her already dead, killed by Double Down on Darhk’s orders. While they’re distracted, Tell attacks Felicity and Curtis Holt at Palmertech (Felicity had earlier brought one of Double Down’s “cards” to Holt for him to find out exactly what they were). She’s able to lead Holt to an escape, but not before compromising the location of Team Arrow’s lair to both Holt and Tell. Double Down flees, but is eventually intercepted and apprehended by Ollie and Diggle. Later the three finally have the “OG Team Arrow” bonding time Felicity was craving, and Oliver announces that he has a surprising new lair for them to use. 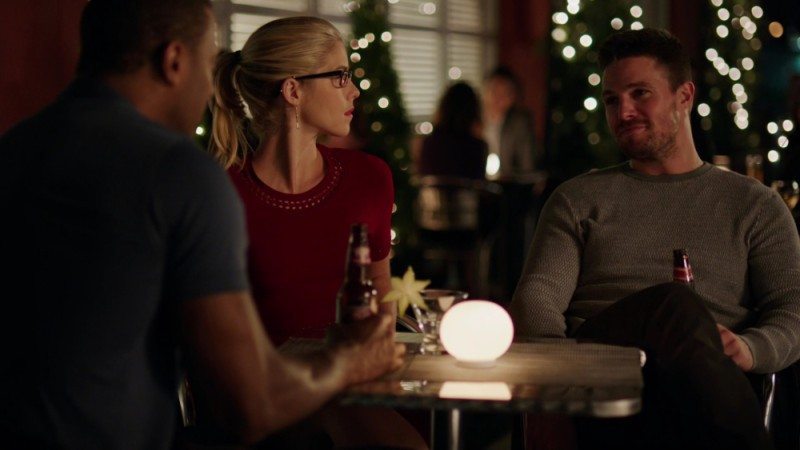 The episode’s B-Story focuses on Laurel and Thea in Nanda Parbat. They arrive and explain to the current Ra’s al Ghul, Thea’s father Malcolm Merlyn, that they’ve come with Sara Lance’s body and intend to ressurect her, much to Nyssa’s (the previous Ra’s’ daughter and Sara’s former lover) dismay. Malcolm initially refuses, stating that Sara wouldn’t be the the same person if they brought her back. However, after Thea rebuffs Malcolm’ attempts to help her deal with her own Lazarus Pit-induced bloodlust (which includes Malcolm setting up to League of Assassins members to be killed by Thea) he relents. Sara is successfully brought back, but it is full of uncontrollable and animalistic rage. Nyssa, distraught by their actions destroys the Lazarus Pit, vowing that she’ll kill Malcolm. 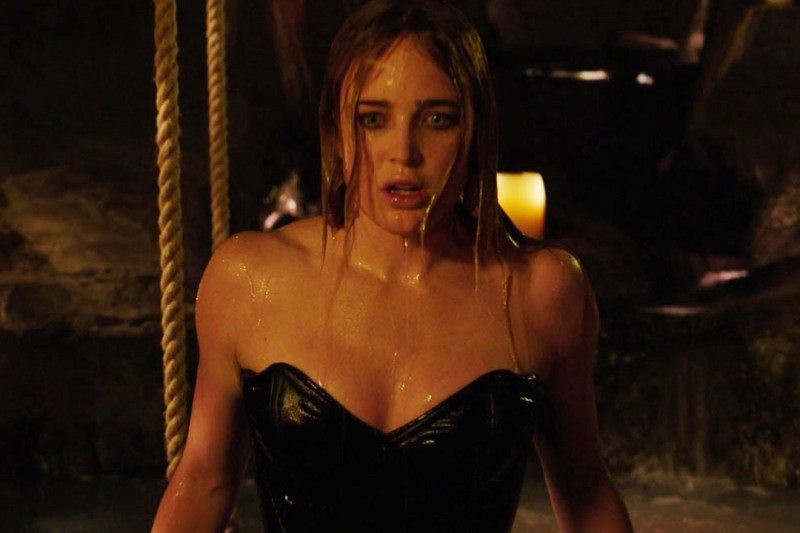 For this week’s flashback, Oliver continues to attempt to fit in with the mysterious armed forces on Lian Yu. He learns that they’re there goring a heroin/coco hybrid drug known as SLAM. When some of the supply goes missing, Oliver convinces the other mercenaries to allow him to torture their indentured workers instead of murdering them. Once they find out who stole the drug, Oliver vows to kill her himself, however he actually helps her escape.

Restoration is another strong entry in ARROW’s fourth season. As a long time fan of the show, I really enjoyed the focus on the Oliver/Felicity/Diggle trio A-Story. While I appreciate how large Team Arrow has become, it was a nice throwback to see the series’ original three protagonists operating as they did in season one. Double Down also provided an interesting villain for the episode, as it’s not often we get to see Green Arrow and his team go up against a legitimate metahuman. His power, which admittedly is one of the weirder ones in the DC stable, was executed very well visually, and I would love to see him take on Barry Allen in a future episode of THE FLASH. The B-Story was well done as well. It’s always a nice treat to see Malcolm Merlyn back on the series, and the scenes between him and Thea were a dramatic high point of the episode. I must admit, I’m surprised that the series already resurrected Sara Lance. I thought that storyline would be drawn out a bit longer, possibly until the ARROW/THE FLASH crossover that’s supposed to set up LEGENDS OF TOMORROW. 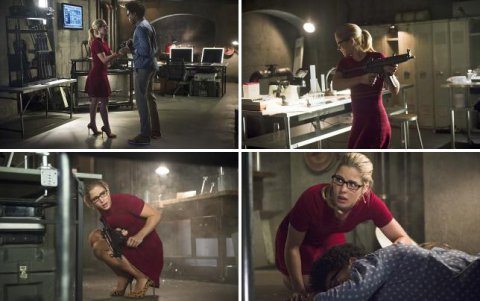 Acting-wise, I was particularly impressed with Emily Bett Rickards this week. Last season, there seemed to be times where she seemed to be going through the motions in her portrayal of Felicity. That was not the case tonight, however. From her excitement at working solely with Oliver and Diggle again, to her verbal smackdown of them for acting like children, to her forced role-reversal where she was forced to make up the same types of far-fetched stories to Holt that Oliver used to try and tell her, Felicity was the standout character of tonight’s episode. Rickards really brought out the elements that made fans fall in love with her in seasons one and two.

What did you think of ARROW’s third episode of the season? Leave your thoughts in the comments below, or on Twitter @Comicsverse!