Oliver takes a major risk that ends up having devastating consequences not only for Green Arrow himself, but for those he cares about as well on the latest episode of ARROW.

SPOILER WARNING: While these reviews always have some spoilers, I felt it was best to attach a major warning to the top of this review given the nature of this episode. Proceed if you dare.

For once, an episode of ARROW doesn’t start in the dead of night with a crime being committed. Instead, we begin at a bright sunny Queen campaign event to clean up Star City Bay (The same bay that Damian Darhk not so politely asked Candidate Queen to stay out of last episode). All of Team Arrow is there in their guise as Ollie’s campaign staff, which comes in handy when the clean-up is attacked by a machine gun wielding drone. Felicity is able to shut it down, but not before several civilians are injured.

READ: Behind on Arrow? Catch up with last week’s review of S4E7 here!

Oliver, wracked with guilt over the attack has John Diggle interrogate John’s brother and former HIVE ghost Andy (whose still in the Arrowcave cage), but he’s less than forthcoming. Meanwhile, Felicity’s mother discovers the engagement ring Oliver had planned to propose with in episode one and tells her daughter about it. Felicity is initially excited, but quickly realizes that Ollie had planned to propose when they were living away from Star City and wonders why he hasn’t proposed since they moved back. Her questions are put on hold the next day, however, when Oliver, with the team’s blessing, outs Damian Darhk’s identity to the press. 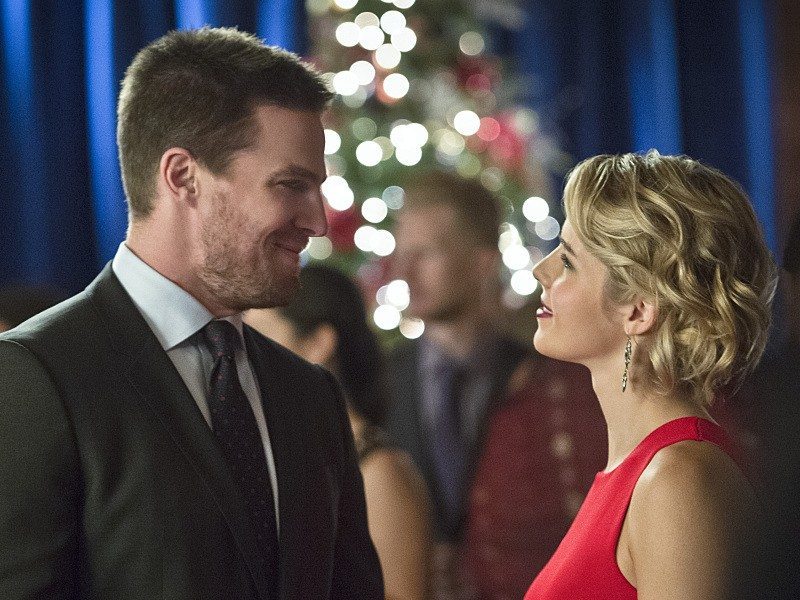 Despite the danger they’re all in, Oliver’s campaign still holds their planned Holiday Party, where Felicity confronts Oliver over the ring. He explains that he hasn’t proposed because of the dangerous lives they lead, but before he can say more, the party is interrupted by Darhk who abducts Felicity, Thea, and Diggle. After brutally beating as many ghosts as he can find doesn’t lead anywhere, Ollie decides that he has to turn himself over to Darhk in exchange for the three hostages. Meanwhile, Laurel learns of both her father’s role working for Darhk and that he’s become a double agent for Ollie. The three meet to discuss how Ollie should turn himself over when Malcolm Merlyn arrives, wishing to help in order to rescue Thea. 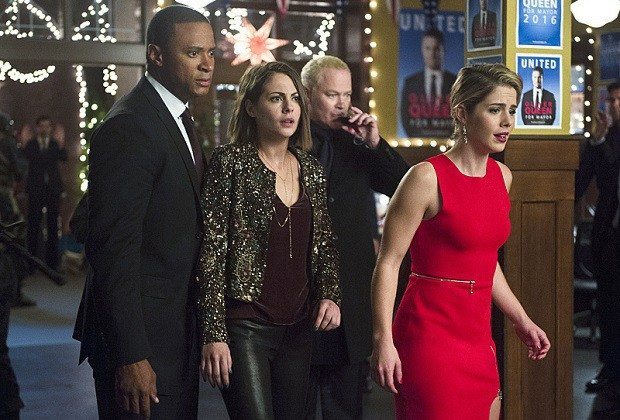 Ollie turns himself over to Darhk, but is soon double crossed and is forced to watch the three captives die in a specially designed HIVE gas chamber. That is of course until Black Canary and Merlyn, dressed as Green Arrow to cover Ollie’s secret, arrive to save them. After freeing the prisoners, the group attempts to escape except for Malcolm, who heads off to fight Darhk. The fight initially doesn’t go well for Malcolm, and he’s almost killed by Darhk until Ollie saves his life. Malcolm returns the favor by saving Ollie’s, then seemingly blowing Darhk up with an explosive arrow. Meanwhile, Felicity, Thea, Diggle, and Laurel are stuck fighting with minions so loyal to Darhk that they’re more than willing to dir for him. The heroes are initially outmanned, but they’re saved when Lance arrives with SCPD officers.

READ: Loving THE FLASH and ARROW? Check out ComicsVerse’s discussion of the recent crossover!

Oliver later bemoans that they didn’t find Darhk’s body, but Felicity cheers him up with a surprise tree-lighting ceremony by the bay. Ollie turns the surprise around on her by proposing at the tree lighting, which she tearfully accepts. Alas things aren’t meant to go well for the happy couple as their limo is attacked by machine gun wielding ghosts. Ollie manages to drive them away, but not before Felicity is hit. The episode, and the first half of the season, end with images of Oliver cradling a bleeding Felicity in his arms juxtaposed with images of Darhk returning home to his wife and daughter.

There really was no B-Story tonight, just the above A-Story and of course the Lian Yu segment. Oliver, with the help of the woman he supposedly murdered but secretly kept alive, swims over to the Amazo (the ship from the second season) to get some maps that he believes will explain what the Baron and his men are looking for on the island. On the way back, he’s attacked by a shark, explaining another of his mysterious scars. However, the two are captured before they can examine the maps. 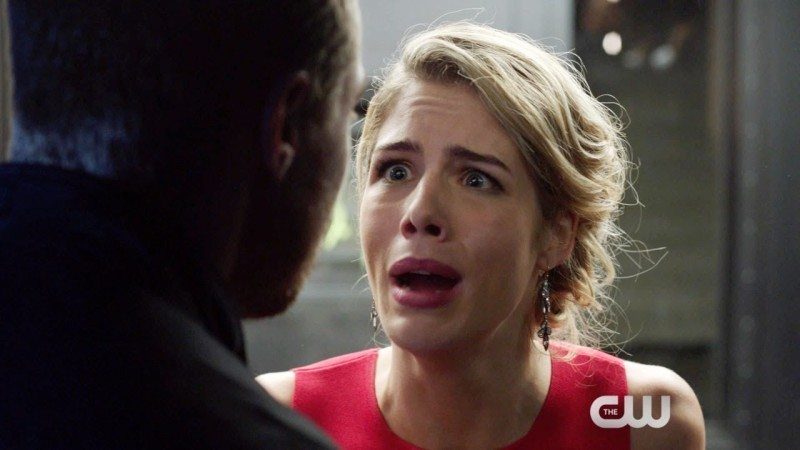 I’m going to get the big red herring out of the way first; I don’t for one second believe that Felicity Smoak is dead or dying from these injuries, nor do I believe that she’s the body buried in the grave that we saw during the season premiere’s flash-forward. I think this is a pretty obvious red herring, as death rumors have followed the Felicity character for years now. I think it’s much more likely that either Ollie will be forced to fake Felicity’s death to keep her safe from Darhk, or that another of the characters (unfortunately, I think Laurel being most likely) will actually be killed off.

READ: Looking forward to DC’s next series LEGENDS OF TOMORROW? Check out our take on the trailer here.

With the Felicity business out of the way, let me just say I loved this episode. The fourth season of ARROW has been outstanding so far, outside of the Lian Yu stuff, and this midseason finale really put a capper on top of that. It’s brilliantly paced, well-acted, and everything in it makes total sense. Even the ending, which as I stated stands out as a red herring to me, is very well-staged. The juxtaposed shots of Ollie cradling Felicity while Darhk returns home to his previously unknown family all set to Christmas carols were hauntingly well done. 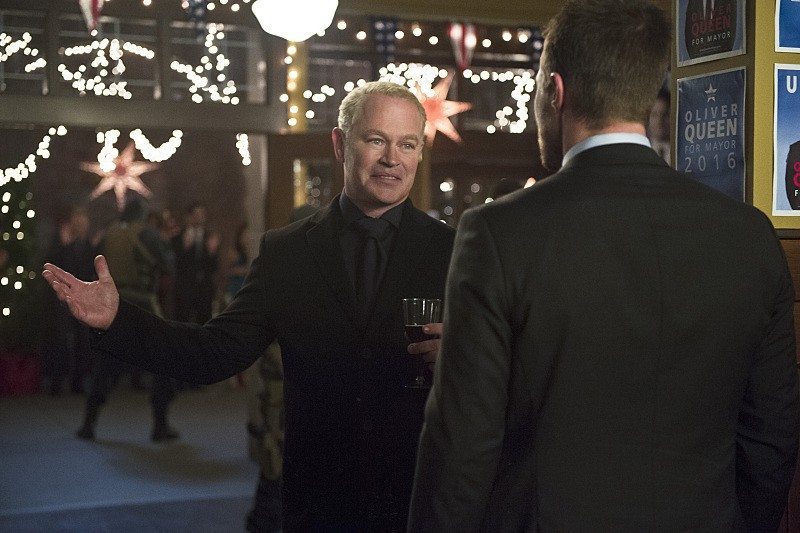 Speaking of haunting, Neal Mcdonough deserves tonight’s acting MVP for his performance as Damian Darhk. He’s owned the screen for every second he’s appeared through out the season, but tonight he brought his menacing persona to a whole new level. If he keeps this up for the rest of the year, he may surpass Deathstroke’s season two turn as the best ARROW villain. 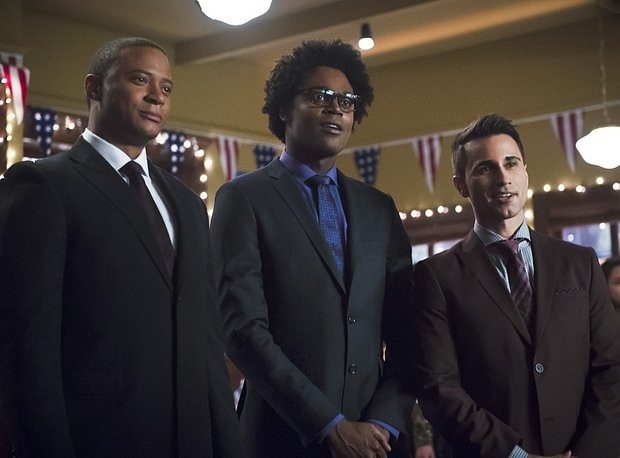 ARROW’s midseason finale delivered a strong cap to what has been a real return to form first half of Season 4. Alright all, that wraps up the first half of ARROW’s fourth season. I hope you’ve been enjoying these reviews, and I’ll see you back here in January for the next new episode!