A stunning revelation shakes John Diggle to his very core, and sends out aftershocks that affect every member of Team Arrow.

The seventh episode of ARROW’s fourth season begins in a way somewhat reminiscent of the show’s earlier season, namely with a group of motorcycle riding criminals hijacking an armored car. They’re quickly dealt with by Team Arrow, however the criminals turn out to be HIVE “ghosts” who don’t steal the money, but rather successfully burn it so it can’t be used to prop up Star City Bank. The night’s not a total loss for the team however, as the team is able to get their hands on one of the fake tooth cyanide capsules the ghost carry, and Felicity calls in the recently returned Ray Palmer to help them ID it, though she has an ulterior motive to figure out why Ray isn’t revealing to the world that he actually is alive. 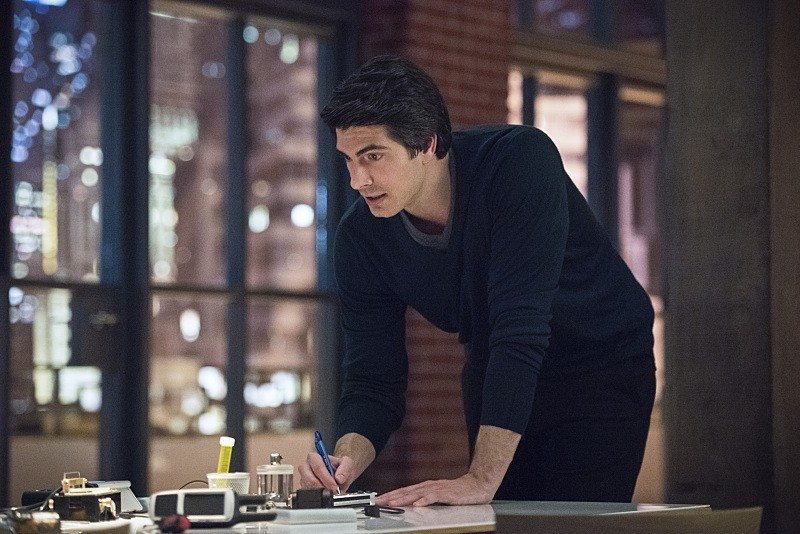 After confessing to Felicity that he feels like his life has no purpose, Ray is able to track a chemical on the tooth to Wolfman Biologics, and Team Arrow launches a raid on their ghost-infested headquarters. In the ensuing melee, John unmasks one of the ghosts to reveal none other than his long-thought-dead brother Andy. Diggle is devastated by the revelation that his brother not only wasn’t killed by HIVE, but is seemingly working for them. This, combined with the information he found out several episodes ago regarding Andy’s activities in Afghanistan, leave John an emotional wreck who feels there’s no need to attempt to contact or rescue his brother.  The rest of the team, especially Ollie and Dinah, disagree and begin planning a rescue without John’s knowledge.

READ: Need to catch up on Season 4 of ARROW? Check out our reviews here!

The team tracks to the ghosts to an abandoned mental institution, and move in to rescue Andy initially without John. Their mission is quickly compromised, and the situation looks dire until John and Ray Palmer in his Atom suit arrive to even the odds. The team escapes with Andy and brings him to the Arrowcave, though he seems completely unwilling or unable to provide John with any information about HIVE or how he’s alive. 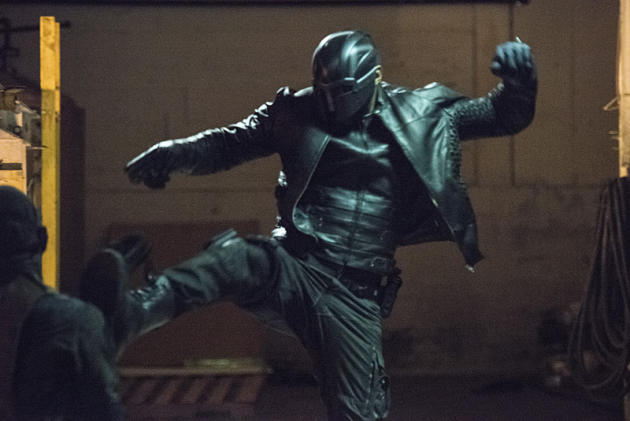 Brotherhood has two main B-Plots strung through it, both of which look like they’ll have massive consequences going forward. The first deals with Malcolm Merlyn’s return to Star City to attempt and convince Thea to begin killing criminals in order to satiate her Lazarus Pit-induced bloodlust. Thea briefly considers this course of action after she nearly murders a man who hits on her while she’s on a date with Alex. However, during the mission to free Andy Diggle, she came into contact with Damian Darhk and not only resisted his powers, but her exposure to them somehow satiated the bloodlust. She tells Malcolm she thinks Darhk is the key.

The episode’s other major subplot (finally) dealt with Ollie’s mayoral campaign.  After giving a very well-received at an SCPD charity event, Ollie is approached by Damian Darhk (who seems not to know Oliver moonlights as Green Arrow, though he of course could be playing him) with an offer to allow Darhk to become a major campaign supporter. Ollie initially considers the offer, theorizing that getting close to Darhk could be a way to undermine his operation and hasten HIVE’s defeat at the hands of Team Arrow. However he eventually decides not to, and publically declares his support for a project Darhk had demanded he denounce, much to the latter’s dismay. 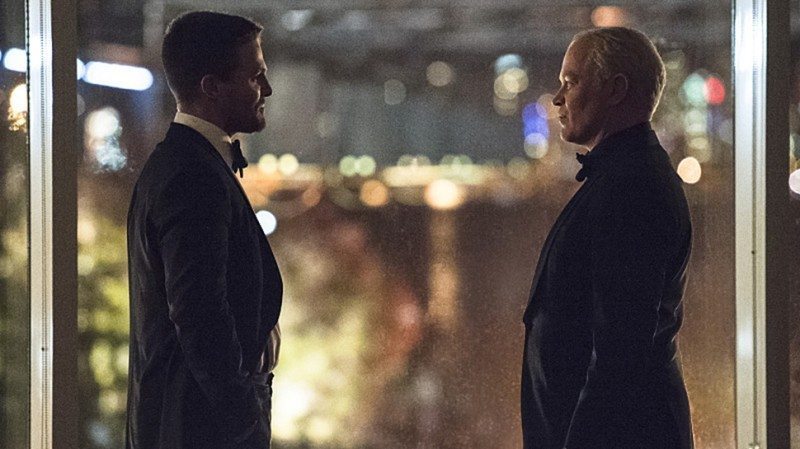 This week’s island subplot was once again very barebones, introducing very little new information as to what’s going on on Lian Yu.

READ: Not prepared for the ARROW/FLASH crossover? Catch up on the Scarlett Speedster’s adventures here.

“Brotherhood” is a return to form for ARROW after the misstep that was the previous episode, though it still wasn’t nearly as good as the season’s first 5 episodes. The main Diggle-story, while very important in a character sense, feels small in scope, which is surely by design since the upcoming eighth episode is part of a major crossover with THE FLASH to launch the upcoming LEGENDS OF TOMORROW.  The Thea/Merlyn and Ollie/Darhk B-stories are both well-executed, but are both more exciting for the potential future developments they tease than the actual content featured in this episode.

The acting MVP of the episode is definitely David Ramsey, who gives a tour de force performance. Oftentimes his character of John Diggle feels a bit underplayed, as his nature is to be collected and stoic, but Ramsey really takes advantage of the Andy plot to run John through a ringer of emotions. The absolute highlight scene to me was John’s the confession of the brotherly feelings he has towards Oliver. It really showed how far the two characters have evolved since the first season began.

Could Ollie’s pushing of “hippie, crunchie programs”  into his mayoral campaign signal the character moving the into leftist direction of classic Green Arrow?

Lyla is FINALLY back after her unexplained absence.

I really like the friendship that the show has been building between Diggle and Laurel. Character-wise it makes complete sense, and David Ramsey and Katie Cassidy have a great rapport.

Line of the week goes (once again) to Felicity for “Has to be better than how you usually spend your evening, dressing in leather and tying people up.” as said to Ollie (and overheard by an older actress extra so over the top that all she was missing was a monocle) at the Policeman’s Ball.

“Brotherhood” put ARROW back on the right track after last week’s misfire by telling a solid, if small in scale, character story about John Diggle and using B-Plots to set up major developments for the rest of the season.