When somebody mentions The Big Game, I usually think back to my middle school days when kids threw basketballs at my head and I had to take a biology test with a concussion. Needless to say, I tend to avoid sports like the plague. However, SLAM!, an ongoing series from Boom Studios, is not your typical sports story. 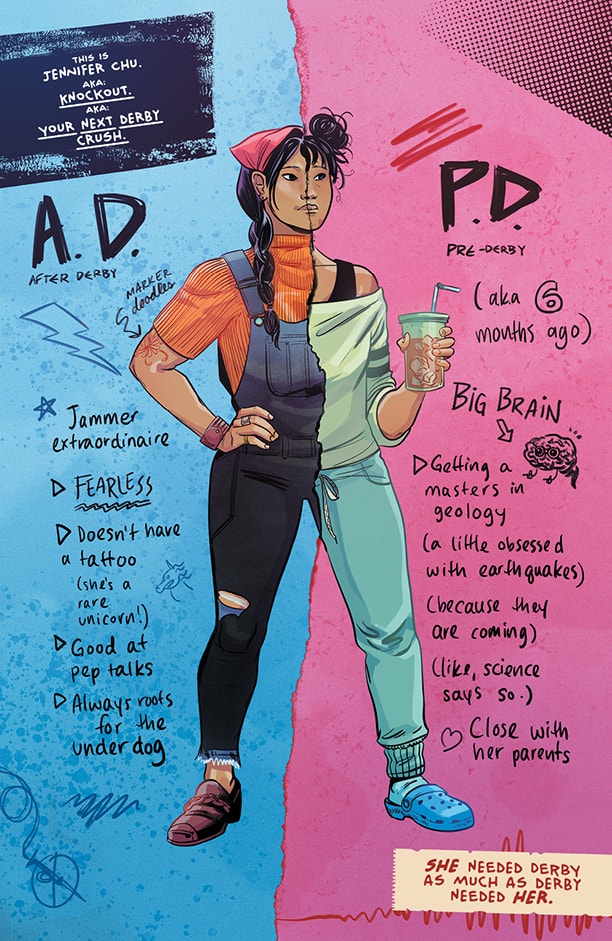 SLAM! is a love letter to the world of roller derby, a women’s sport that has been rising in popularity due to its colorful riot grrrl aesthetic and its embracing of punk, queer, and misfit identities. Writer Pamela Ribon (also known for her work on MOANA) has been a derby girl herself for years. However, she was never satisfied with mainstream portrayals of roller derby, which Ribon says focus on “these power girls that all look the same […] and are angels by day, devils by night.”

READ: How does STAR VS THE FORCES OF EVIL battle sexism?

This is not particularly surprising. Female athletes have always had a complex relationship with media. There’s an uneasiness in the way women’s athletics straddles the line between femininity and masculinity, especially within the sports community, where gender roles are very important. It’s easy for writers to place derby girls into roles such as the Action Girl or the Manic Pixie Dream Girl in order to ease fears that these are just a bunch of bulky butches who don’t care about men (heaven forbid!). 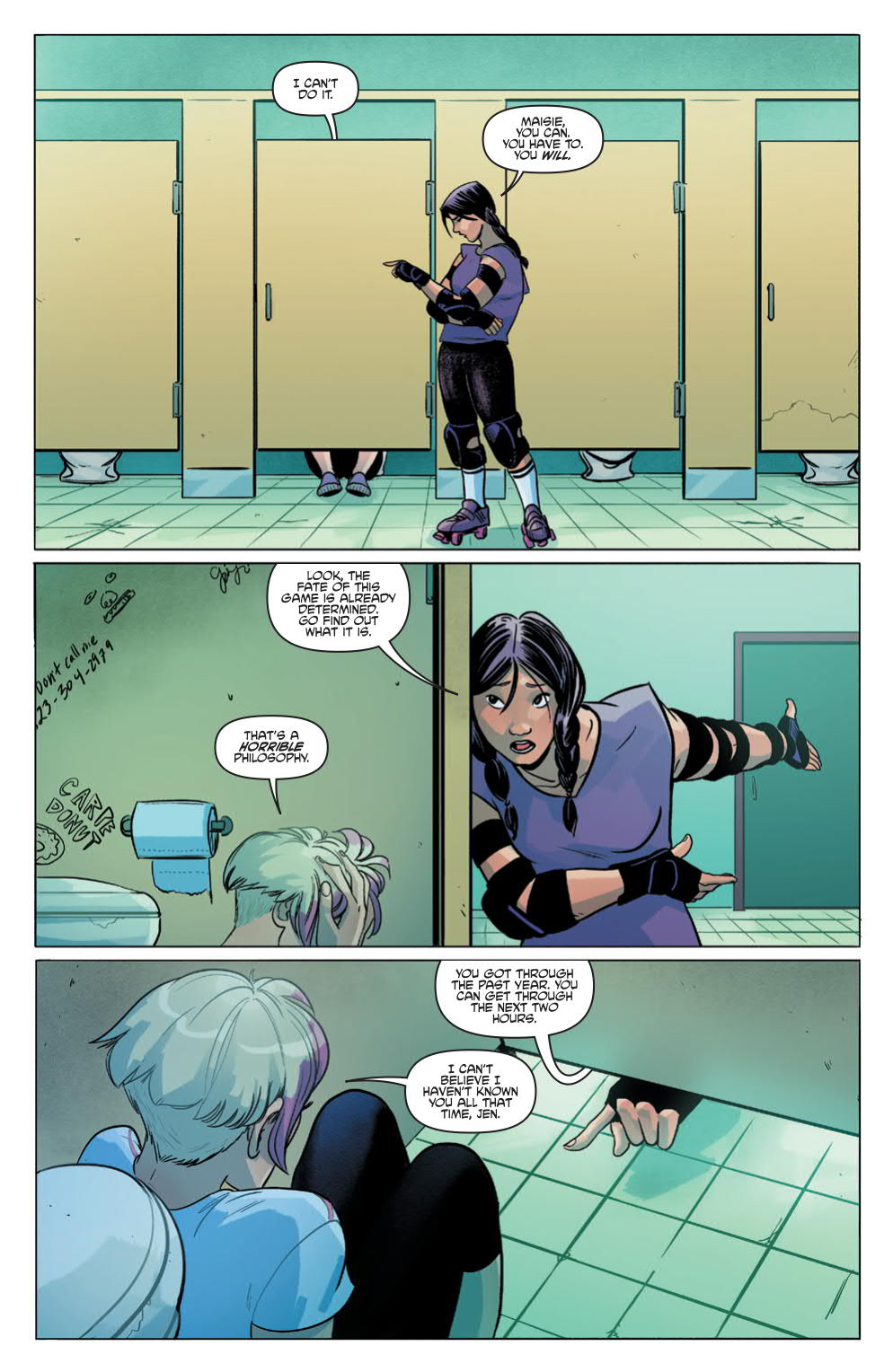 SLAM! refuses to sooth this cultural anxiety about the relationship between men and masculine women. In fact, it actively ignores it. The series is far more centered around navigating the intense female-female friendships, commitments, and disputes that naturally occur within roller derby. SLAM!’s main conflict occurs when best friends Jennifer Chu and Maisie Huff join separate teams and struggle to maintain an increasingly distant relationship because of their obligations to their teammates. The emphasis on such a conflict embraces the richness of these women’s lives outside of heterosexual romance, rather than centering around such a romance.

SLAM! also refuses to feminize or sterilize the appearance of derby. For one thing, no two athletes in the comic look the same. There are tons of different body types, ethnicities, and gender presentations in the comic – and often characters actively take pride in their uniqueness. For instance, Jen takes on the nickname Knockout XXL in reference to her physical size as well as her intense determination.

READ: For more on body positivity and feminism in comics, check out CV’s analysis of the Valiant series FAITH!

During practice and in games, female characters take on realistic derby poses – which can look aggressive or heavy or even silly, rather than dainty or delicate. Sometimes (actually all the time, who am I kidding?) characters sustain injuries. They proudly display big, ugly bruises to their teammates as though showing off a badge – “Hey, look what happened to me!” 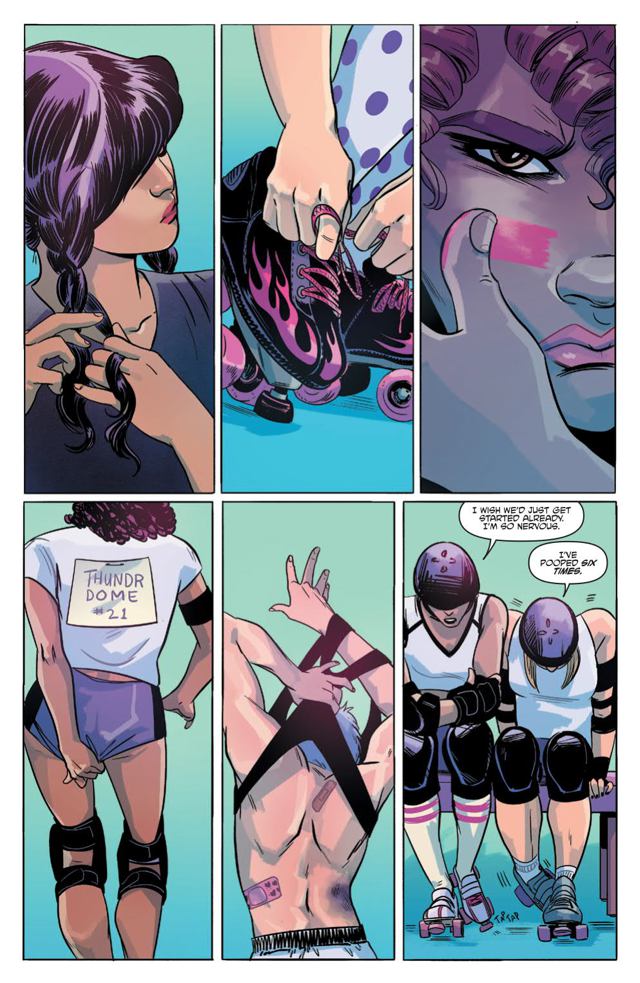 Despite challenging a conventional, tamed-down idea of beauty, SLAM!’s artwork, by Veronica Fish, is actually gorgeous in its own right. Derby uniforms involve lots of fun patterns, bright colors, and glam makeup, so naturally all the characters look awesome.

Plus, the color palette strongly echoes the colorful nature of roller derby. The comic’s main palette uses a great deal of cyan, magenta, and yellow (the primary colors in print) to contrast each other and make everything look super bright. Backgrounds are full of bold watercolor washes and the occasional star pattern. Even if you don’t even read the text, a lot of the art is fun just to look at on its own. I’d say it’s one of the biggest highlights of the series. 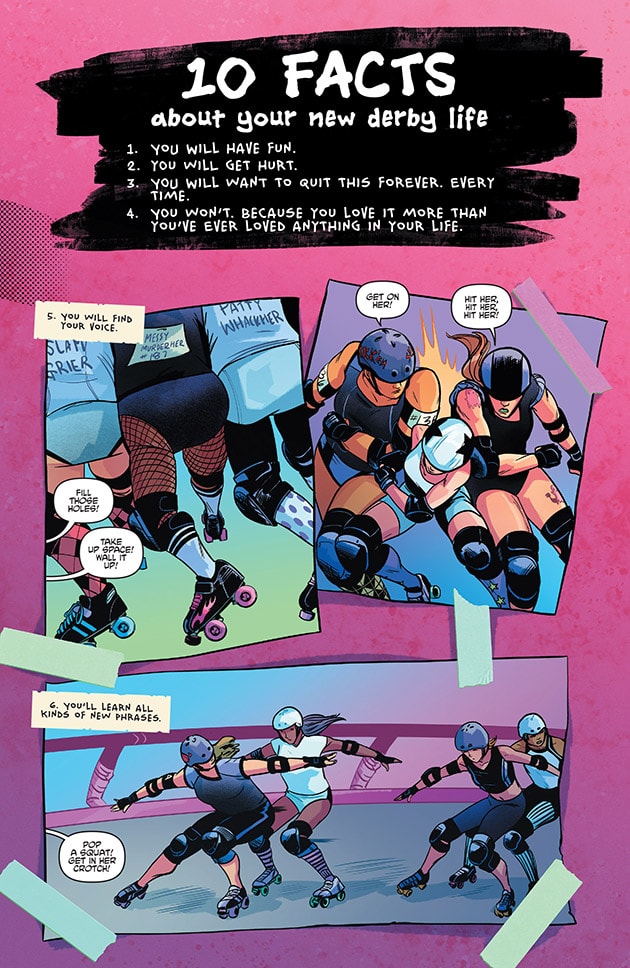 Does SLAM! have its problems? Sure. There are no out LGBT characters in the comic so far. Not that a comic is necessarily required to have queer characters, but it seems a bit odd in a comic about a sport with such heavy ties to queer culture. Plus, there’s an angry black woman running Jen’s team who, though humanized at the end of issue #2, still feels really stereotypical to me.

READ: Enjoyed this installment of Why Aren’t You Reading? Take a look at last week’s coverage of Dark Horse’s ETHER!

However, SLAM! is, overall, an excellent comic. With a funny and nuanced portrayal of female dynamics, it’s a must-read for any feminist. And even if that’s not your cup of tea, the artwork is still super memorable. Plus, you don’t even need to know anything about roller derby – the comic explains everything for you. So check out SLAM! You might just find yourself falling in love with the derby track.

Why Aren’t You Reading is a weekly column dedicated to recommending excellent series that didn’t break the top 100 in sales last month.