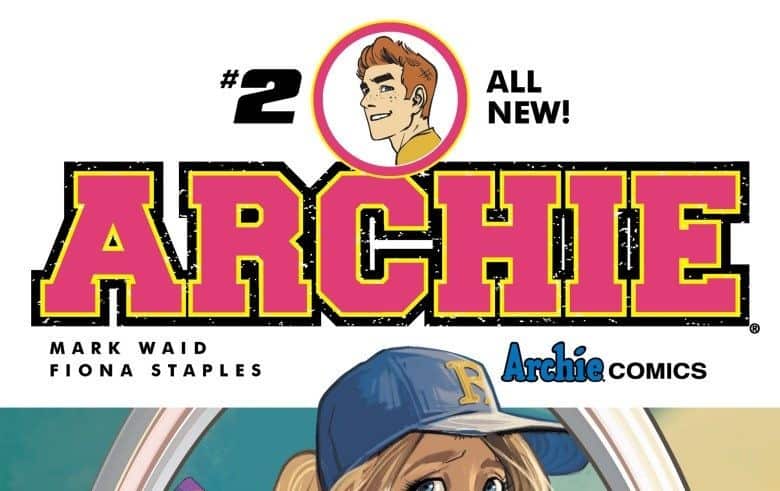 Still reeling from their break-up, Archie and Betty (and the rest of Riverdale High, actually) try to find a sense of normality.

Archie’s car is busted. Normally Betty would fix it in a flash and for free, but since she and Archie are no longer together, Archie has to get a job to pay for repairs. Hijinks then ensure as Archie’s klutzy penchant for destruction rears its ugly head, even though it garners him the attention of the new girl at school…

Like RISE/DAWN OF THE PLANET OF THE APES, ARCHIE is a reboot I didn’t need, but am so glad I have. ARCHIE #1 was stellar–not only a fresh update of the original, but just a fresh comic in general. It was exuberant, joyful, and stood so firmly on its own. Like its titular hero, though, ARCHIE #2 is a little less sure on its legs. Don’t get me wrong, it’s still gorgeous, it’s still exuberant, and it’s still fun, but it adheres a little too strongly to its source material. Where ARCHIE #1 felt wholly fresh and believable as a teen comedy, ARCHIE #2 veers strongly into the slapstick, distancing itself from its first issue and the audience that issue created. If ARCHIE #2 represents the status quo, that’s perfectly fine–it works for the issue–but compared to the first, we’re dealing with something of a different world.

ARCHIE #2 embraces the logic afforded a comic book world, where ARCHIE #1 was a more grounded story about teenagers and life in high school (though it did embrace teen romantic comedy logic). To be fair, there were glimpses of Archie’s klutziness in the last issue–two brief cut-away panels of Archie failing at bowling, of Archie hammering his sleeve to the wall–but nothing like Archie destroying the foundations of a mid-construction mansion as he does in this issue. Those glimpses in the last issue aren’t really enough to justify an entire issue based around his clumsiness. There’s a feel of more telling than showing, of almost rushing this aspect of his character.

I’m harping on this a lot, and I feel a little bad about it considering the great work going on, but, as of right now, we only have two issues of ARCHIE and they live in different worlds, existing by different rules. They look the same, and the characters are the same, but one is more a more genuine romantic teen comedy with shades of VERONICA MARS that just happens to be a comic book, where the other is decidedly a comic book. Again, it’s not bad–it’s just something of an identity crisis.

Once you get past the slapstick, however, there’s a touching story about love and friendship and how it can transcend labels like “dating” and “breaking up”. I defy you to not feel a little twinge in your heart when you learn what happens to Archie’s car.

That all works because of the characters. Only two issues in and they’re all sharply defined. Obviously Archie is the focus, but the supporting cast threatens constantly to steal the show. That leaves, however, Betty in a disappointing state of limbo. She’s one of the two main players in the central story, but we get less of her than we do Archie. Again, understandable because the comic is named after the guy, but Archie could step aside a little and give us more Betty. What we do get practically screams for issue #1 of BETTY. I hope we’ll get more, because the potential is definitely there–especially given the introduction of Veronica (I’m calling her Veronica because it’s clearly her, despite the issue not giving up her name). The social climate of the school and town is so clearly and richly constructed that you can’t help but look forward with unabashed glee at her impending arrival at Riverdale High. Riverdale is the comic book world’s hippest powder keg, and Veronica’s clearly holding a match. I’m much more interested in what that does to Betty than Archie (he’s already got heart-eyes for Veronica).

I’m not sure I’d care this much, though, if it weren’t for Fiona Staples’ art. I only know her work from SAGA (shame on me), so at first I wondered how it would translate to a decidedly more pedestrian landscape, but shame on me (again) for doubting. Her pencils bring the story to life. “Whimsical” is hardly a word I’d use to describe the world of SAGA, but, looking at Staples’ work on that title through the lens of ARCHIE, it’s remarkable how much of that feeling exists in her art. The work is dynamic and grounded but has an almost-tragic sense of transience to it. Riverdale High is no Wreath (or any world in SAGA), but find a student in high school that doesn’t feel like an alien trapped in a war between people that don’t understand them and I’ll show you the world’s most impossibly well-adjusted teen. Staples now seems like a no-brainer for this title. She has the right command of movement and pacing and space to capture the high school experience’s neck-snapping vacillation between surreal and all-too-real. None of this works, however, without Andre Szymanowicz’ color. It’s remarkably similar to SAGA’s, but with the volume turned up. It pops and is appropriately richer for the vibrant world of Riverdale.

Despite muddy rules on what kind of world it’s building, ARCHIE is a great comic. I worry that because the content isn’t Serious or Important, that it doesn’t feature superheroes, and that it’s, well, ARCHIE, it’ll strike people as inconsequential. For every dour and self-serious and socially conscious comic book or every superhero EVENT, we need a comic like ARCHIE, something that’s good at what it does: telling a story about likable people in a way befitting how much we like them.

So do yourself a favor and pick yourself up a copy. Whether you’re a long-time fan of Riverdale High or just like being entertained, ARCHIE has what you need.