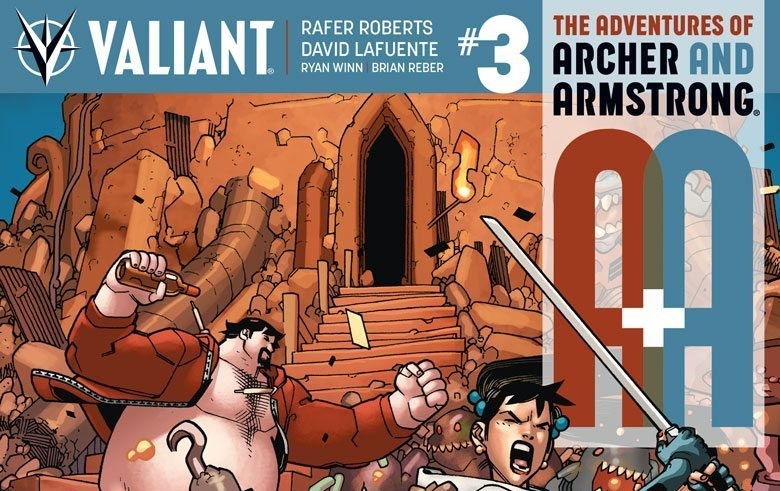 What happens when you accidentally unleash an immortal party demon god upon the world after he’s been trapped for 3000 years? ARCHER AND ARMSTRONG #3, that’s what. After luring Armstrong into his satchel in the first issue and capturing him and Archer, Bacchus has finally escaped his imprisonment and is out to make up for lost time. All’s not lost, though. Our heroes, with the help of Mary-Maria and her order of nun assassins, are fighting their way out of Armstrong’s satchel to rain on Bacchus’ parade of debauchery.

Amidst all the expected insanity of the plot, though, is legitimate, if slightly unexpected character growth for Armstrong. By this point, we’ve come to understand Armstrong as a cavalier drunk who has used his immortality to live the best an immortal life has to offer. One of the drawbacks is that no one else is immortal and so he distances and takes care of himself first and foremost. Thus, over the couple thousand years he has been alive, Armstrong has become a selfish man out of the necessity to spare himself from caring too much. This distinct lack of maturity is something that Rafer Roberts and David Lafuente exploit in their development of Armstrong. There are several moments throughout ARCHER AND ARMSTRONG #3 where Armstrong becomes reflective of his past actions and how they impact others. Mary-Maria points out that all of the events that have happened in this book have been Armstrong’s fault, and Archer’s been caught in the crossfire. 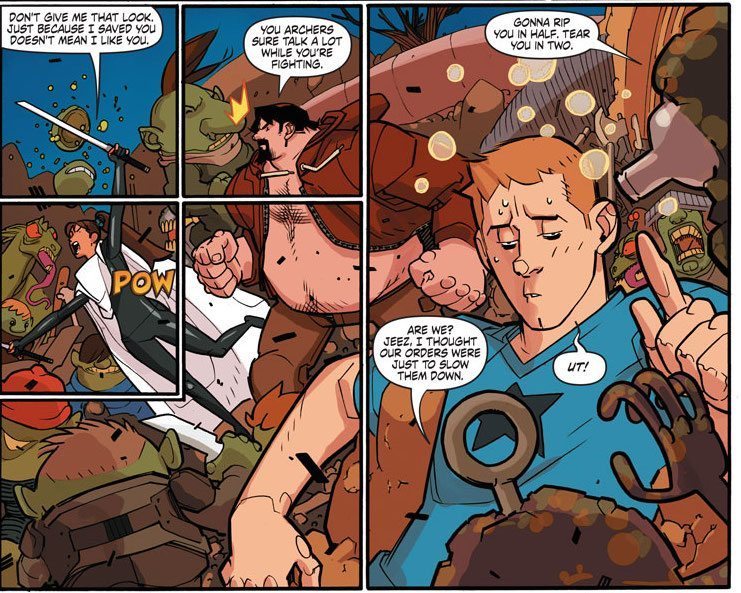 For the most part, it is Armstrong and Mary-Maria that carry ARCHER AND ARMSTRONG #3 since Archer is too inebriated to do very much but babble incoherently. It’s a strange dynamic that doesn’t always work, but it serves its purpose well enough of providing development for both characters. Plus, taking some of the focus from the main dynamic gives enough time for the other characters like Bacchus to be fleshed out. This may be Archer and Armstrong’s comic, but one of the great strengths of the book is that all of the characters pull their weight. They bring some narrative levity to an otherwise character-heavy issue and the balance mostly works.

If there was one gripe, though, it would be that this issue does not make a very good standalone issue. Yes, it’s an on-going story, but #2 was a great book in its own right whereas it feels as though #3 is not nearly as accessible to new readers. It isn’t a major problem, but any great issue should be able to stand on its own and never rest on its laurels. 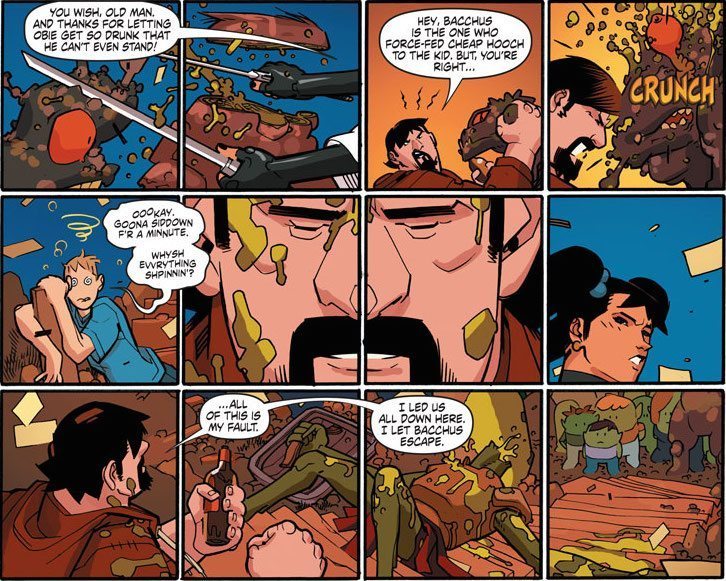 The book is also not as funny as previous issues of ARCHER AND ARMSTRONG, but that is mostly to do with the heavy emphasis on character development and spread out characters. ARCHER AND ARMSTRONG really hits its stride when the entire cast (or at least most of them) get to share the page with one another, but since this issue has them separated most of the time, we don’t get to see very much of that snappy rapport. There are still some moments of great humor, like when Bacchus crashes a frat party, but these moments of comic relief  are few and far between.

LISTEN: Think you know the X-Men’s Storm? Listen to our discussion of the world’s most recognizable black superhero

It’s not perfect. Despite this issue leaning a little more on the drama side of things and not standing entirely on its own, it’s still worth reading. It alludes to a great big climax in the next issue that will surely be more true to form for the book. Don’t read this just to get to the next issue, though. ARCHER AND ARMSTRONG #3 may not be the best of the bunch, but even at its worst, it’s still a book worth investing in.