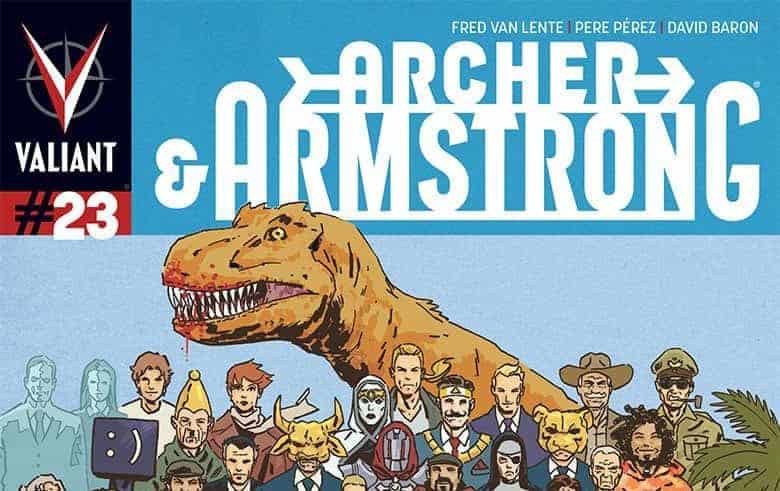 Michael Walsh cover is a great centerpiece to Archer & Armstrong’s zany corner of the Valiant Universe.

This is a tale of kings… Archer and Armstrong are kings in their own right. The Lizard King is orchestrating his organized religion to control the world. Among his subordinates is Percy Vale, the Fisher King…the king of autotune. (Announted by Tumblr and Youtube and Twitter and such.) Vale mah talk the “Teh Borat” but he looks and acts like a certain Canadian pop artist who likes to wear chains and tank tops…not Avril Lavigne, the other one…Valiant’s lawyers have instructed me to keep mum about the comparisons which I am sure are strictly coincidental.

The King of Rock and Roll, Elvis had more great scenes in this issue and Armstrong is still quite naked. Perez draws great interiors with strong facial expressions and realistic body movement, even when the movement is larger than life.  The script called for a lot of scene (and era) changes, but Perez differentiates with ease and skill, thankfully never allowing Armstrong’s man bits to be shown.

Archer and Armstrong may be a psychotic concept that should not work, but when they use conspiracy theories in a deadpan way (cult war), or showcase Tumblr, Youtube and Elvis and all the other very American themes…the fiction enters the real world and is allowed to hang. Even when something like time travel gets introduced, it is lampooned and played off for laughs, making reading this series a very cathartic experience.

This issue may not be the best time to enter, as the story wraps up, but the trade paperback is something you will definitely want to watch out for when it hits the stands later this year. Next month, “there’s something about Mary-Maria…” and I can’t be more excited!