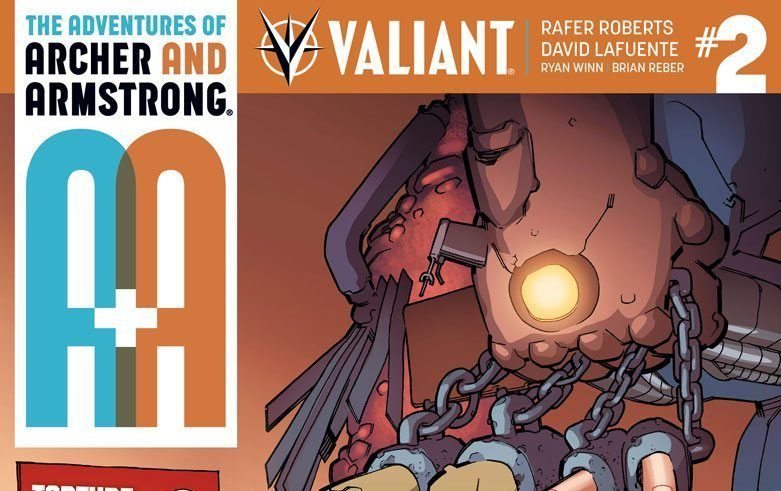 The previous issue of ARCHER AND ARMSTRONG, while good, suffered a bit from having to set the story up. The plot barely got going and while the book had its fair share of jokes, it felt a little contrived. This is understandable, of course, because not everyone buying this book is familiar with the characters. It happens, but we’re moving on. ARCHER AND ARMSTRONG #2 is an entirely different beast.

READ: Get caught up on what you missed with our review of A&A #1

Continuing the “Archer and Armstrong Are in the Bag!” arc that started in the first issue, #2 begins with Armstrong reminiscing about his immortal past before the action returns to the present. There, Archer and Armstrong are still imprisoned by Bacchus in Armstrong’s satchel and before long Mary-Maria comes to their rescue. If last issue felt a little static, this one is entirely kinetic. The jokes bounce off the walls of each panel and the rapport between the characters is crisper and flows naturally. Flashbacks don’t feel as narratively jarring, but best of all, while the larger story moves along, this issue still has that feeling of being self-contained.

Backpedaling a bit here, the biggest strength of this issue is the characters. They were present in #1 and not bad, but not given a whole lot to do. Here, the come alive and the wackiness is springing from every page. Whether it’s giant retro robots (but not the cool or ironic kind), or bad beer torture, it’s clear that Rafer Roberts and the rest of the team had a blast finally getting to stretch their legs a bit. Of course, all the hijinks would feel insubstantial if there wasn’t some sort of literary element to give the story some weight. Thankfully, Roberts gives us that with a touching, but still hilarious moment of bonding between Archer and Armstrong. 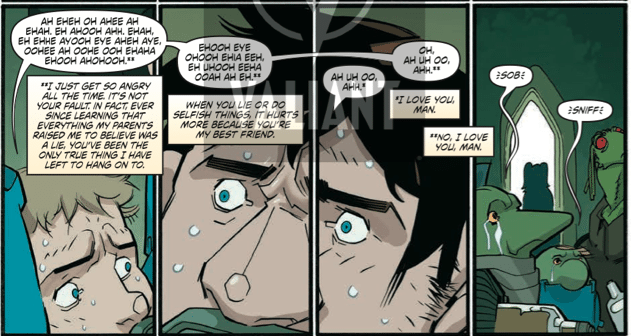 One of the biggest pitfalls any comedy can fall into is trying to add some dramatic meat to their story, but then end up making everyone feel uncomfortably sad or emotional. Usually it’s because it was too sharp of a change in tone and that awkward feeling is that grating tension (like the kind you get when you have to hug someone you really don’t like/know very well). An example of a comedy that did it well was Amy Schumer’s TRAINWRECK movie last summer. The drama provided narrative weight, but it never went so far as to detract from the rest of the movie. ARCHER AND ARMSTRONG does the same thing. Roberts balances that fine tightrope of drama and comedy, and adeptly shows us the bond between these two guys without forgetting the context of the story. It’s not only great characterization, but it’s great storytelling, a balance only the best comics achieve.

LISTEN: Got a second? ComicsVerse podcasts can keep you busy

The art, led by David Lafuente, is just as solid as it was last issue. If anything, like Roberts, he’s also given a bigger chance this issue to explore the full gambit of his artistic talents and it shows. There are large panels, small panels and everything in-between to match the story Roberts is telling. Keeping the consistency from last issue, this book is bright and expressive. If you had any doubts about what the tone of this book was, Lafuente’s pencilling and Brian Reber’s coloring leave no mysteries about it. It’s evident from the first page that this is not a book that takes itself too seriously. 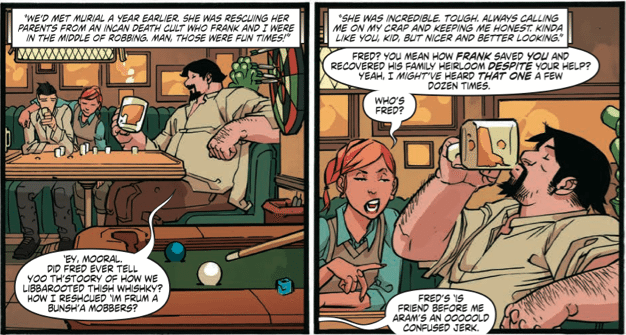 If there’s a problem with this book, it is a minor one at best. The Armstrong flashbacks that have begun both books feel a little plodding. It’s a hard thing to critique since they are crucially relevant to the story, but they’re never nearly as fun as the rest of the issue. They’re not bad, but you almost wish they were a little shorter so you could get back to the bigger story. To summarize this point: Roberts, Lafuente and the rest of the team have made a book so fun that the additional flashbacks on the front leave you impatient to get on with the story. If ever there was a problem with being too fun, this would be the time.

That aside, ARCHER AND ARMSTRONG #2 is even better than the debut with many more laughs and a story that finally gets off the ground. If you were hooked on #1, you’ll love this one. If you weren’t sold, give #2 a read anyway. It’s great fun and worth every minute.