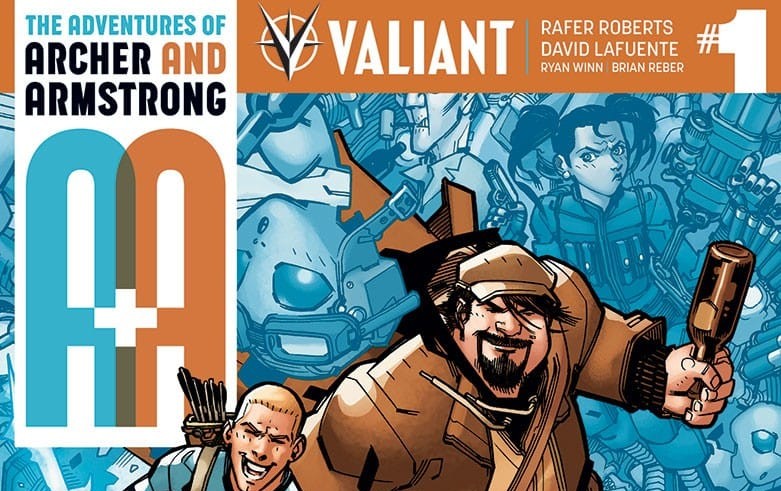 For those not aware, one of Valiant Comics’ most anticipated comics this year, A&A: THE ADVENTURES OF ARCHER AND ARMSTRONG, is set to be released March 16th. If you’re like me, the series of alliterations in the title alone makes this title enticing enough. It has a sort of old serial television feel to it. A little INDIANA JONES, a little FLASH GORDON, but not in a cheesy-production-value kind of way.

For those not grabbed by the throwback title, listen up. The basic premise of ARCHER AND ARMSTRONG is that there is an immortal drunk, Armstrong, with the stature of Hagrid crossed with a larger Hagrid who has employed a plucky, lovable teenager named Archer as his ward who also happens to be a master of several martial arts styles. It’s a little Batman and Robin-esque, but with a twist to keep things fun. The two other featured characters are Archer’s sister, Mary-Maria, a ninja-nun (don’t start, I was confused at first too) who leads “The Sisters of Perpetual Darkness”, and an anthropomorphic fish in a suit and tie that lives in Armstrong’s cavernous satchel. You can try to pick it apart for its references, but Rafer Roberts and David Lafuente weave them all into such a unique tapestry that makes any attempt essentially useless.

In A&A: THE ADVENTURES OF ARCHER AND ARMSTRONG #1, Armstrong is mourning the recent death of a close friend and goes literally into his satchel to find, in his words, “perfection in a bottle.” Unfortunately, he leaves his bag open and all of the monsters that he’s stowed in there over thousands of years are climbing out. This forces Archer to climb into the satchel and find Armstrong himself.

On the whole, it is a strong first issue. Roberts and Lafuente waste no time getting into the hilarity and hijinks that immediately lets readers know what kinds of characters these guys are. The art by Lafuente is as bright and lively as the plot with every one of Bryan Reber’s colors having a certain bouncing vibrancy about it. The flashy onomatopoeias that jump at the eye like the punches are particularly fun, as is the pencilling by Lafuente. A seemingly more complex pencilling job would give off a conflicting tone with the off-the-wall humor, so it’s good that it is kept sharp and without fuss.

READ: Want to know what else is coming from Valiant this year? Check it out.

If there was one thing that I took issue with in this book, it was some of the introductory dialogue. For instance, we don’t need Archer to explicitly tell us that he’s “mastered many forms of physical combat” and that “the ones [he doesn’t] know, [he] learn[s] very quickly.” It goes back to that television serial vibe the whole book has, but it feels a little stunted and unnecessary to say while he’s throwing down monsters left and right. With the nice addition of combat definitions dictionary-style at the bottom of some panels, we don’t need Archer to tell us how much he kicks ass. We can clearly see that. 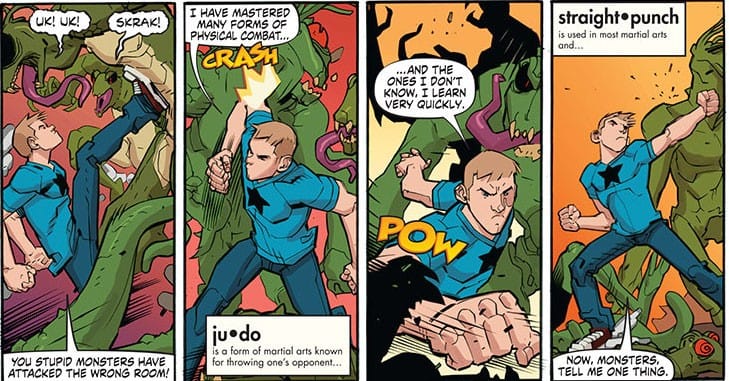 But that’s a minor gripe that’s easy to get past, as the series is clearly off to a raucously fun start with a delightfully absurd cast of characters, interesting settings, and a premise that has you simultaneously scratching your head and grinning from ear to ear.

If you’re like me and have yet to find a book to hold your attention in 2016, pick up A&A: THE ADVENTURES OF ARCHER AND ARMSTRONG #1, hitting shelves on March 16th. It doesn’t grab your attention. It commands it.