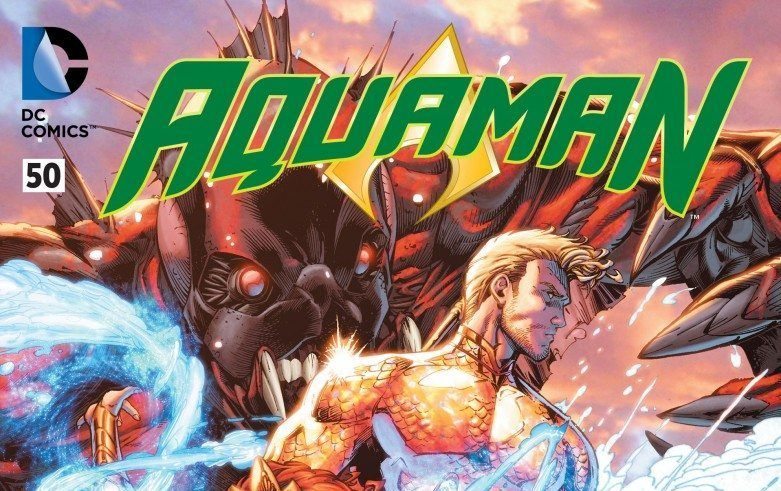 Remember when the New 52 launched and Geoff Johns painstakingly made AQUAMAN cool again? The comics were dark, brooding, and mysterious like every great swoon-worthy Casanova should be. Better yet, they made people interested in Aquaman again. Gone were the lame fish jokes and mockery, with Johns abolishing them in the very first issue. There were some great stories from THE TRENCH to THRONE OF ATLANTIS. Finally, Aquaman was being treated like the king he was and all without resorting to a faux-rugged harpoon hand.

This is an important preface for those of you picking up AQUAMAN #50 because if you liked your Arthur Curry staring off into the depths of ocean sunsets at Amnesty Bay, you aren’t getting that. What you’re getting instead is a hell of a lot more humor. There is literal laughter spelled out in AQUAMAN #50. Not that this is a bad thing. Writer Dan Abnett has taken a lot of the good things from Geoff Johns’s run, namely the conviction that he treats Aquaman with, which he then injects with his own brand of humor. 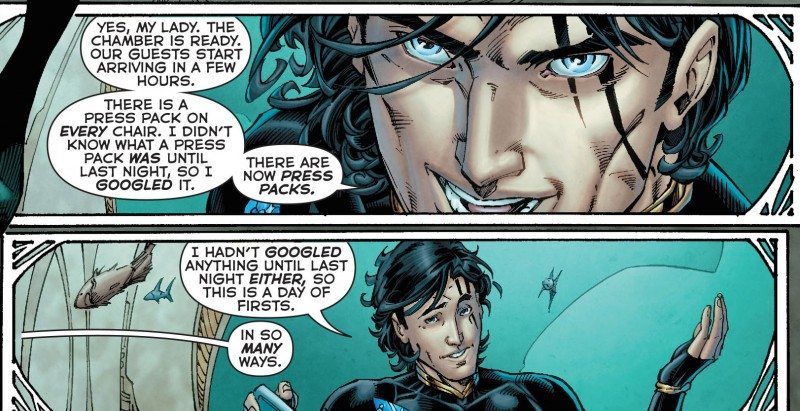 The story follows as such: Mera is getting ready with her communications director Garth to hold a press-conference at the opening of Spindrift Station, the new Atlantean embassy to the surface world, when Arthur receives a call from the CIA informing him that a monster has killed 12 people. It is from the ocean, so he goes to investigate. Also, for a fun twist, it is using water teleportation to kill its victims. Arthur goes to the site, pokes around a bit, and lo and behold the monster turns up! Its name is Dead Water and it’s a bit of a Doomsday-like creature: a man of very few words who communicates perfectly using only body language. Arthur fights him, eventually wins and the press conference is a slam-dunk. This is a solid, isolated story that clearly moves along a bigger arc as well. Oh, and Aquaman’s costume is shredded but more on that later.

The jokes don’t always land, and Abnett beats some of them into the ground, but you can tell that he had a whole lot of fun writing this. Abnett clearly understands some of the innate absurdity in Aquaman’s character and exploits it without diminishing the character or the story. That kind of well-balanced humor is where DC unfortunately seems to be lacking still. Either jokes are inserted poorly into serious books or there are books entirely devoted to the humor and hijinks like HARLEY QUINN or BAT-MITE. Not a good in-between. Take note, DC. Abnett gets it.

READ: Want to know what the best Batman stories are? ComicsVerse has you covered!

The story’s nice too. It feels very self-contained, but not in a bad way. If there was ever a textbook case of a comic book issue that stands perfectly on its own while also moving the larger arc forward, it would be this one. We get a clear idea of the world Aquaman inhabits and having much of the story centered around that idea conveys it without having to give too much exposition. A sea creature is attacking humans just as Aquaman and Mera are extending peace to surface-dwellers. It’s a complicated, pretty weird relationship, but perfectly understood in Abnett’s writing. 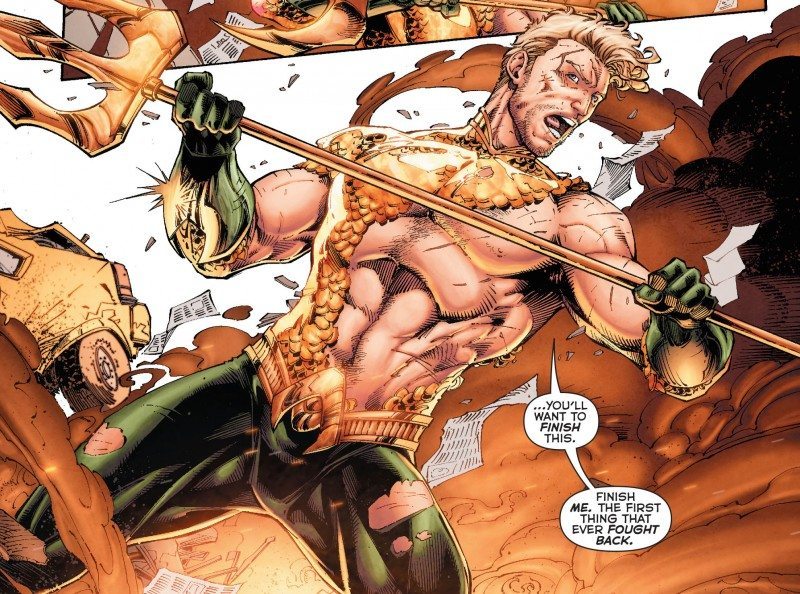 But I won’t forget about the art. Guest artists Brett Booth and Co. clearly grab the reigns of Abnett’s humorous writing and go off with it. However, most importantly, for those of you that feel sexually unfulfilled by the men in comics, AQUAMAN #50 pays in spades. How do you up the sexual ante without making it smutty? Rip that Atlantean chainmail and tease some flesh! Yup, in his battle with Dead Water, Arthur flashes his major pec, deltoid, and ab game. Thank you, Brett Booth and you’re welcome, readers.

AQUAMAN #50 is a fun ride that plays true to much of who Aquaman is. There’s tension, action, and enough humor to start its own Wednesday night stand-up. Does it always work? No, but what comic does? The important thing to take away from AQUAMAN #50 is that, strangely enough, DC seems to have a better grasp on how to handle a fish-talking mer-man than it does its oldest and strongest icon. I won’t take potshots, but give AQUAMAN a read, even if its just for the skin tease.