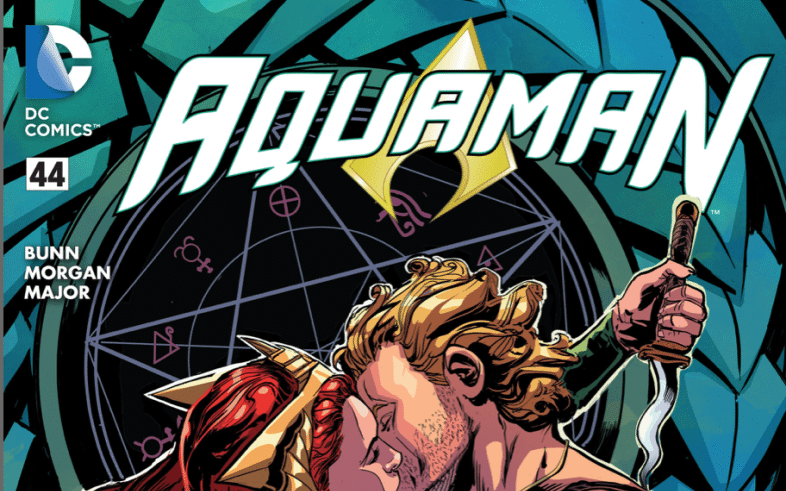 AQUAMAN is in it deep (see what I did there?); he was supposed to destroy the other world which is quickly demolishing Earth. Instead, he’s saving it. This issue sees Aquaman returning to the city that once called him their King. More importantly, he needs to fix things with Mera as he doesn’t see how he can save this “Other Atlantis” without her help. 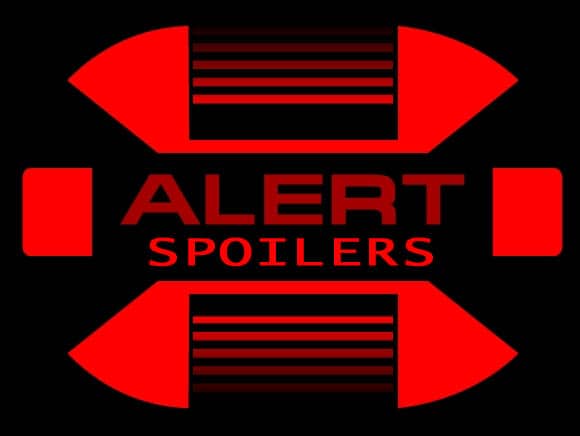 He’s my favorite character, and I admit that freely and with pride. Regardless of that bias, it’s also been my favorite book since 2011; which is precisely why I’m so incredibly disappointed with this issue.

Aquaman forces the Wizard of Thule (from where the storyline gets it’s name: “The Other Atlantis”) to teleport him back to Atlantis. When he does, Aquaman arrives in the royal bedchamber where Mera is fast asleep. She remains just as combative as the flashback in #43 where we saw her (very suddenly) nearly kill him.

From there, half the issue is dedicated to the pair arguing, and the other half is Aquaman fighting for his life against someone else who, we discover before the close of this issue, has come for much more than his life.

The story seems to be more of a filler issue with scenes such as Mera and Aquaman’s opening argument consuming nine pages of the book. In addition, Mera seems unnaturally unstable and it’s hard to tell whether it’s writing or the acting of the characters. I’ve chosen a couple panels in the first three pages that illustrate how Mera flips emotionally from one extreme until she suddenly sends her royal guards away and settles in sexy mode.

You can see above how jarring Mera’s mood shifts are. Speaking to the acting and dialogue together, it’s not clear what Mera’s objective is, while Aquaman is there to resolve the conflict.

Following an rather steamy sex scene during which I just know I was blushing, Aquaman spends two pages putting his clothes on. But after he finally get’s his pants pulled up, he shares the tale of the warped duplicate Atlantis and personally, it’s the highlight of the issue. Atlantis is a huge mystery and DC has always done a fantastic job capitalizing on the fascination many fans have with this classic legend.

The relationship between these two superheroes has always been one of openness (at least since the reboot). Mera has always loved Aquaman for his willingness to sacrifice anything to save innocents, but for some unknown reason, she insists that this “Second Atlantis” is in need of nothing more than its own destruction.

As of the end of issue #43, it was revealed that Siren has been impersonating Mera since this whole storyline began. 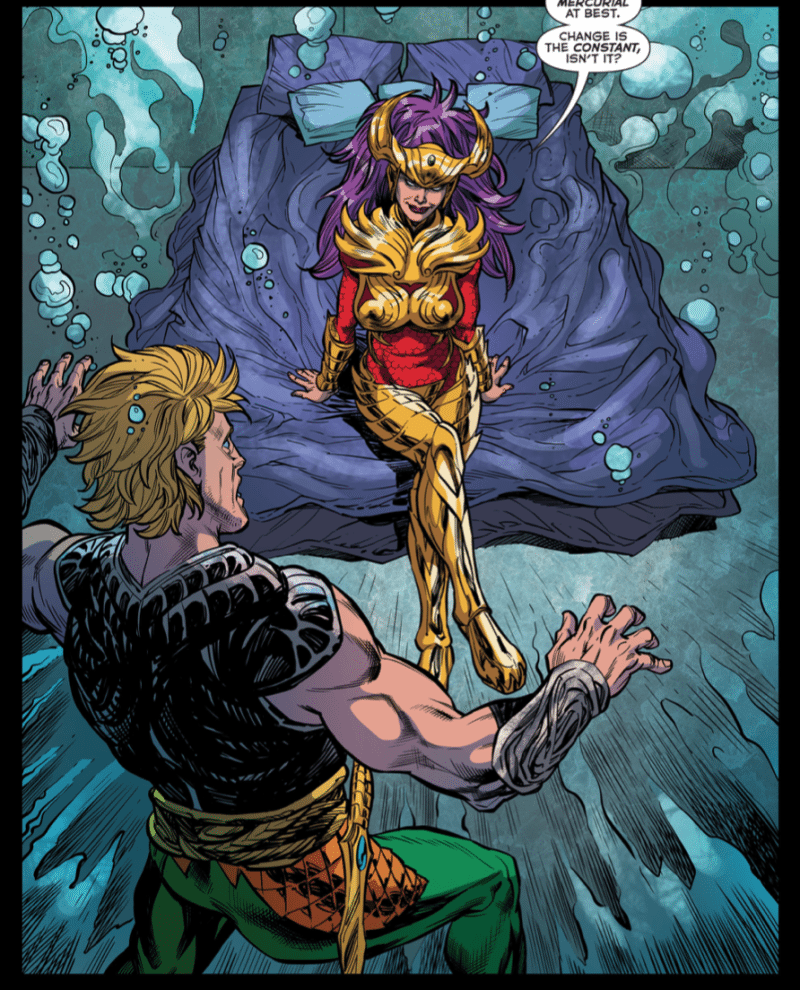 This explains why she hasn’t been the same rational, supportive woman who traditionally acts as his equal in all things, sharing Aquaman’s compassion and nobility. It’s also notable that Mera’s not the half of this relationship who typically needs rescuing; for years, now, she’s been saving him from monsters and villains alike, arriving just in time to pull Aquaman’s fillets out of the fire.

Siren is Mera’s evil twin from her home dimension who has come to DESTROY ATLANTIS!!! (And to get her battleship sunk, apparently, but Siren hasn’t been known to be capable of anything resembling shape-shifting, so I’m hoping this gets explained). As for the aforementioned emotional instability, Siren’s carefully crafted deception, which was revealed in the last issue, doesn’t match the same character that appears here. Perhaps there’s something affecting her mind? Maybe it’s even the same unknown quantity that’s granting her this new shapeshifting ability?

Regardless, I can only imagine what’s going through Arthur’s (Aquaman’s) mind right now. After all, cheating on your girlfriend is a poor life-choice to say the least, but sleeping with you’re girlfriend’s crazy sister is suicide (especially when your wife’s power has been said to rival Wonder Woman’s).

Siren and Aquaman immediately engage in a fight to the death. During this time, she tells how a group of mages has made her Mera’s equal in every way, thus giving her the power necessary to take over Atlantis and kill Aquaman and her sister, Mera.

The issue closes when Siren stabs Aquaman in the gut, which I can only assume was done with a sharp object of some kind, since we never see it; the easiest explanation is that she simply used one of her water constructs, as she has the same ability to manipulate water as Mera. Still, not showing the weapon before, during, or after the stab seems weird, and the confusion pulls me out of the moment.

Now bleeding extensively, Aquaman teleports away blindly and finds himself in a mystery rainforest looking over a mystery beach. We have as much clue as he does as to where he’s landed himself after zapping himself away in such a panic. Now alone in an unfamiliar place, Aquaman is lost and severely wounded.

The end credits tell us the next story is “Aquaman in Space!” which indicates that he’s just accidentally teleported himself to another planet!

My main concern on this book is the inconsistency of the art. The issue is very disappointing to me as a devoted Aquaman fan. Alec Morgan is the fill-in artist for Trevor McCarthy, but in the credits, he’s only listed under layouts. The “finishes” are attributed to Art Thibert and Jesus Merino. These guys are talented. But so many artists on one book? It doesn’t tend to do it any favors: 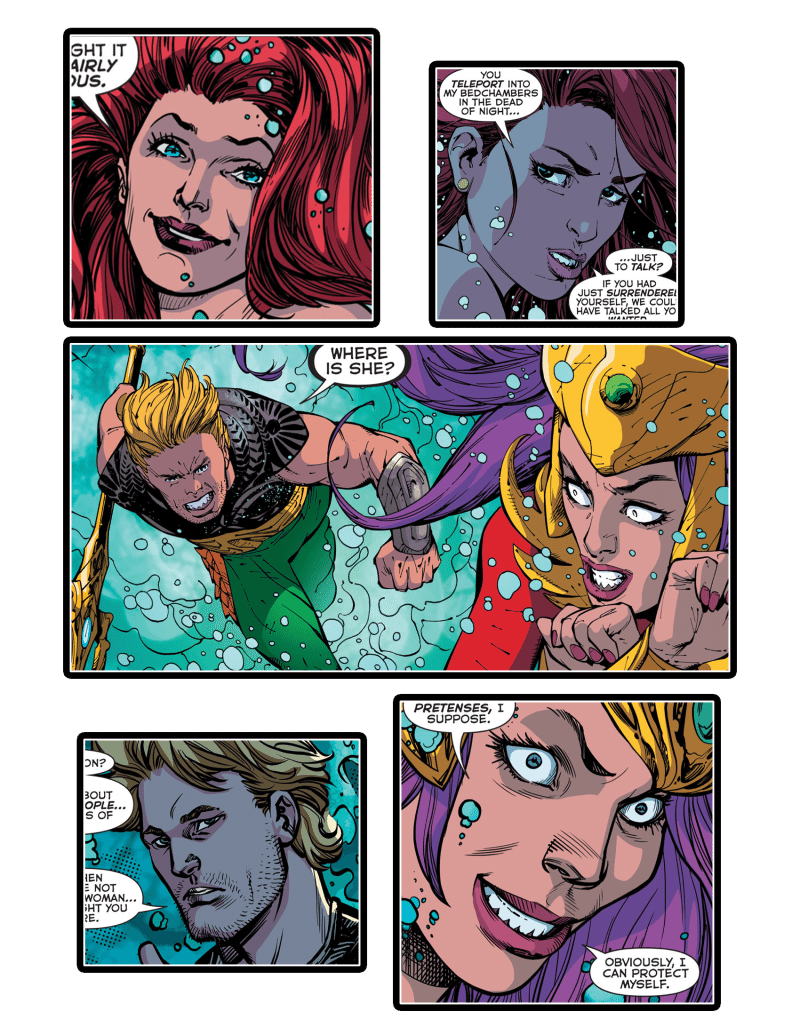 Please, DC. Please tell me these past few issues are just a setback and that you haven’t lost interest in keeping this book good. Since the first issue after CONVERGENCE, it seems to have been made in a state of compromise. I don’t feel these creators want to work on this book, like they don’t take it seriously – there’s no pride in the work. I know these creators are more than capable of delivering the goods, so I’m going to continue to have patience with the book and it’s extremely talented creators.