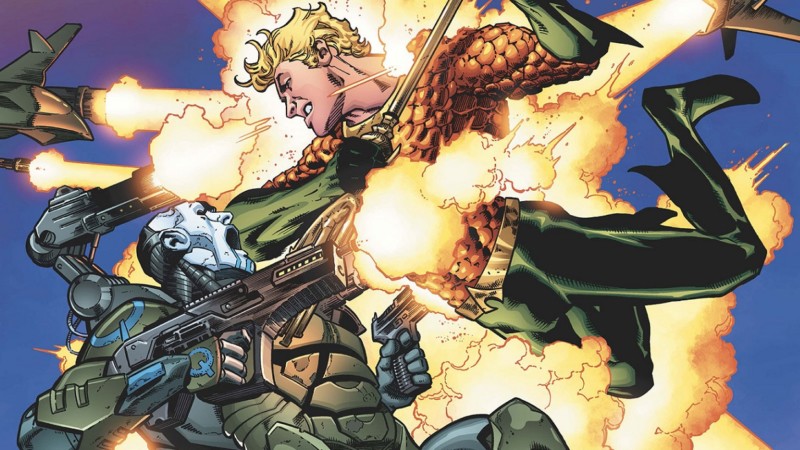 AQUAMAN #17 takes readers on an action-packed journey from start to finish. Dan Abnett and Scot Eaton combine their talents to create a visually impressive story with captivating dialogue throughout. We certainly had a lot thrown at us in this issue: government agents, mind control, super villains, and UN-style press conferences. While AQUAMAN #17 managed to include many exciting moments in a single issue, the lack of continuity really hurt its storytelling at times. That said, let’s get on with the review. 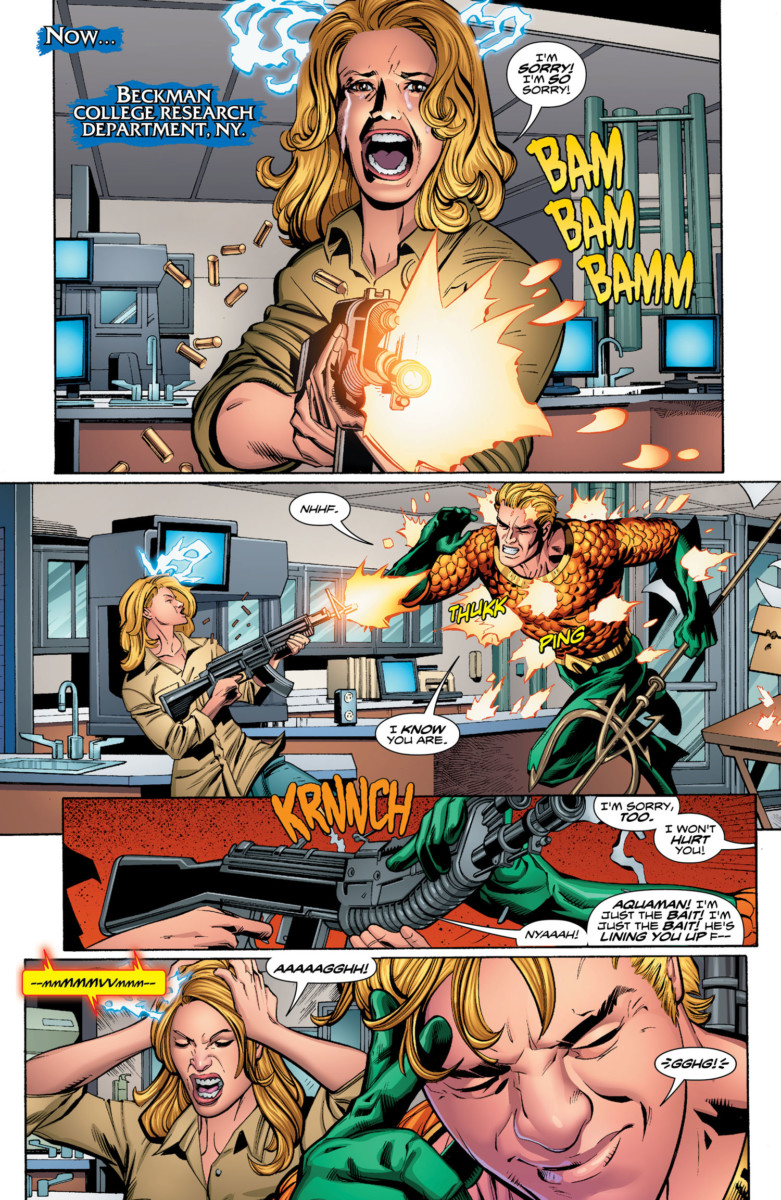 This latest installment begins at the Beckman College Research Department in New York. It appears as though something (Or someone) has taken control of the minds and bodies of the college’s research students. It’s later revealed that the newest addition to the AQUAMAN mythos, Warhead, is responsible for all of the madness going on. As Warhead was first introduced in the previous issue, there are still many questions surrounding him. All we know about the villain is that he’s evil and dead-set on controlling Aquaman. Warhead certainly has all ingredients needed to create a new comic book villain: he hates the superhero and is hell-bent on control and destruction!

READ: Want to start the story from the beginning? Take a look at our AQUAMAN #1 Review

Those ingredients don’t amount to much in terms of story building, however. We’re literally taken from Aquaman being shot at point-blank range in the chest by Warhead, to seeing Aquaman at a press conference shortly thereafter. It kind of takes away from the epicness of the encounter and the effectiveness of the villain they’re trying to create. Why did the writers decide not to show Aquaman as being somewhat concerned, or at least acknowledge the attack afterwards? The transition seems out-of-the-blue and clunky,  but it was somewhat rectified by the issue’s end as we later see.

We are then introduced to Agent Fellner, the head of a security team assigned to watch and protect Aquaman during a press conference. Such a small detail wouldn’t seem so important if it weren’t for the fact that we see a growing lack of trust between Aquaman and Agent Fellner. Shortly after his press conference, we see Aquaman on the phone with his wife and fellow Atlantian superhero, Mera, updating her on the situation. Aquaman seems pleased with the way his press conference went and yet is very careful with what he says to Mera over the phone while in the company of Fellner. This was something his wife seemed to pick up on just before Aquaman ended the call. 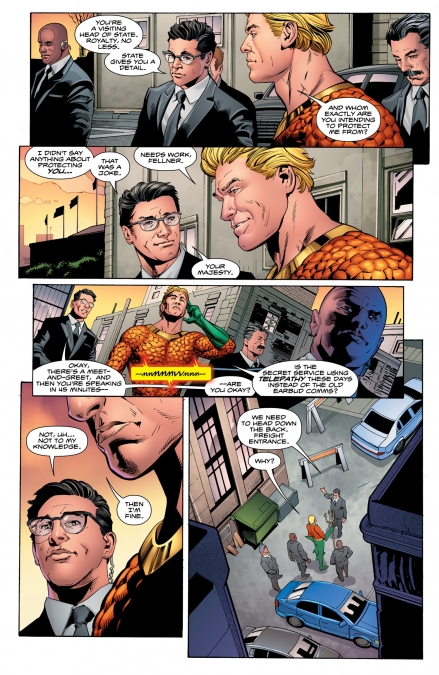 The story gets back on track by the end of the issue, as Aquaman is confronted by a strange man who was seemingly being used as a vessel to transmit a message to him. That message was apparently a cry for help from an unknown source. That source turned out to be — you guessed it — Warhead! We then see Aquaman spring into action, abandoning Agent Fellner and his team. This incident caused Agent Fellner to reveal his true colors, as he quickly got on his phone to alert of a “fish stick gone rogue.” This was clearly something they were prepared for, as they had a special code name ready for Aquaman once he went ‘rogue.’ I thought this provided for an interesting additional element to the story. I’m looking forward to seeing if this winds up being a noteworthy sub-plot in future iterations, once they announce the next AQUAMAN series.

READ: Want to know more about Aquaman’s history? Here’s our review of AQUAMAN #2

By the story’s end, we see Aquaman confront Warhead. Curious as to why he would summon Aquaman for help if he’s trying to destroy him, Warhead seemingly gains the upper hand in this particular encounter. By the end of this issue, we’re left with Aquaman apparently being thrust into what looked like a post-apocalyptic scenario, questioning whether or not this is real. We’re also given a number of subplots and possible scenarios that were left completely unanswered here. Again, my only real complaint with this issue was the lack of continuity in certain areas, especially with the initial Warhead confrontation.

Overall, however, AQUAMAN #17 is a great read from start to finish. I really hope to see more development in terms of the Warhead character being a true ‘threat’ to Aquaman, and not just another throwaway baddie once they (if they) continue with the current story arc as cannon, once the next AQUAMAN series is revealed. Until then? I suppose we can only wait, hope, and see what happens next.