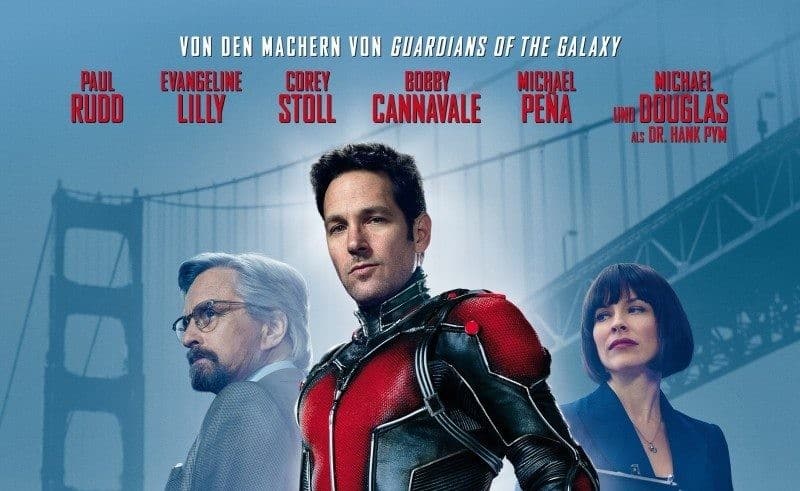 As Marvel Studios prepares to unleash their latest Marvel Cinematic Universe blockbuster, CAPTAIN AMERICA: CIVIL WAR, on the world next week, it seems like a good time to step back and revisit the most recent film in the studio’s library: 2015’s ANT-MAN. Coming on the heels of the divisive AVENGERS: AGE OF ULTRON last summer, the movie went a bit back to basics for the MCU as it featured the origin story of a newly debuting hero in the vein of the Phase One films.

The Comic Inspiration of ANT-MAN

Ant-Man, like many of the great Marvel heroes, was created during the Silver Age of Comics by the legendary team of Stan Lee and Jack Kirby. The original version of the character, Hank Pym, was introduced in the anthology series TALES TO ASTONISH as a scientist who developed a particle that allowed him to shrink to the size of an ant. Along with his wife Janet van Dyne, who used the same particle to develop similar powers to her husband and became The Wasp. Hank and Janet became premiere Marvel heroes and founding members of the Avengers.

Over the years Pym took on numerous other identities related to his powers evolving, including Giant Man and Goliath. During this period, several other characters took on the name Ant-Man. The second Ant-Man, Scott Lang, was introduced in 1979 as an ex-convict and electronics expert who had stolen an Ant-Man suit in order to help his ill daughter. Finding his actions noble, Pym (who wasn’t using the name at the time) allowed Lang to keep the suit and use the Ant-Man name. Lang has been a presence in the Marvel Universe since, and is currently starring in Marvel’s ANT-MAN comic.

ANT-MAN begins in 1989, as aged scientist Hank Pym (Michael Douglas) resigns his commission from S.H.I.E.L.D. after learning that they’ve tried to replicate his shrinking technology. The film then switches over to the present day, showing that Pym has lost control of his technology company to his estranged daughter Hope (Evangeline Lilly) and former protege Darren Cross (Corey Stoll), who plans to use the company to develop weapons tech based on Pym’s research.

Meanwhile, Scott Lang (Paul Rudd) has just been released from prison after several years behind bars. Lang finds life on the outside difficult. His criminal record makes it nearly impossible to find a job while his ex-wife limits the time he’s able to see his daughter until he’s able to provide child support. Desperate, Lang agrees to join in on a robbery led by his former associate Luis (Michael Peña). Lang breaks into a heavily guarded mansion’s vault, only to find nothing but a suit. After returning home, he tries on the suit and inadvertently shrinks himself to the size of an ant.

READ: Before CIVIL WAR, check out our revisiting of CAPTAIN AMERICA: THE WINTER SOLDIER.

Terrified by the experience, Lang attempts to return the suit but is immediately arrested. Pym later uses the suit to bust Scott out of jail, and reveals that he had set up the whole theft and arrest as a test for the former criminal to see if he was up to taking up the Ant-Man mantle. Hank and Hope are planning to stage a break-in at the company to disrupt Cross’s plans, and they need Scott to use the suit to do so. Lang eventually agrees and begins his training. 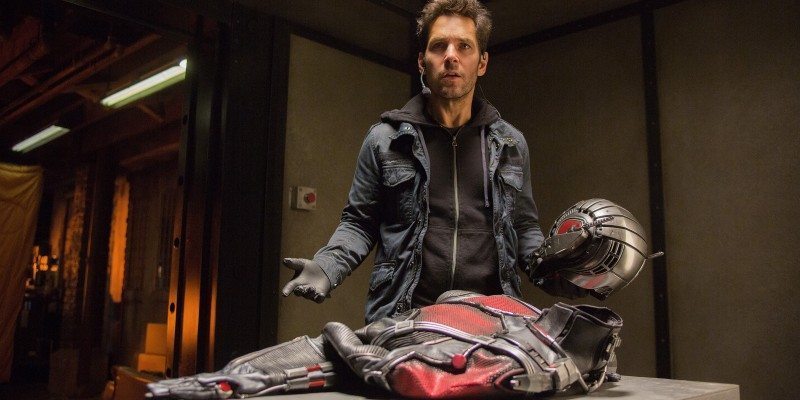 Over the course of his preparations, Scott learns that the cause of the rift between father and daughter is the disappearance and apparent death of Hank’s wife/Hope’s mother Janet while on a mission as The Wasp in the so-called quantum realm . Lang and the team are able to infiltrate the Pym Technologies building and disrupt Cross’s sale of the weaponized armor, dubbed the Yellowjacket, to Hydra agents. Cross, though, dons the suit and engages in a battle with Lang.

Lang and Cross microscopically battle across San Francisco, eventually ending up in Lang’s daughter’s bedroom. After a memorable brawl that includes an encounter with a Thomas the Tank engine, Ant-Man is able to defeat Yellowjacket by shrinking them both into the quantum realm. Much to Pym’s surprise, Scott is then able to return from the realm, giving the former hope that Janet is still alive. 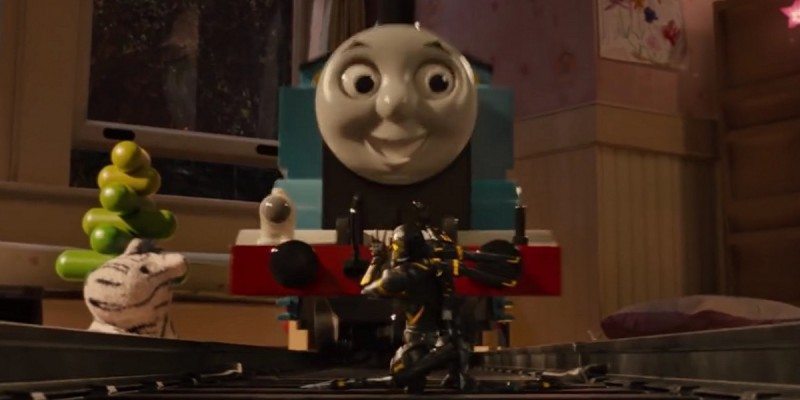 A mid-credits scene shows Hank presenting Hope with a new version of her mother’s Wasp outfit, implying that she will assume the super-heroic identity. A later post-credit scene shows Captain America (Chris Evans) and The Falcon (Howard Mackie) with Bucky Barnes (Sebastian Stan) in their custody, with dialogue heavily implying that Ant-Man would be involved in CAPTAIN AMERICA: CIVIL WAR.

There are a couple of contenders for ANT-MAN’s best moment, but I’m going to have to go with the film’s biggest MCU tie-in moment. At roughly the halfway point of the film, Pym sends Lang to Avengers headquarters to steal something necessary for their heist. While there, Lang runs afoul of The Falcon. The two have a highly entertaining miniature fight scene, and their banter makes viewers highly anticipate the characters sharing screen time in CIVIL WAR and future Avengers films. At the film’s end, it is revealed that The Falcon contacted Lang regarding Avengers business. 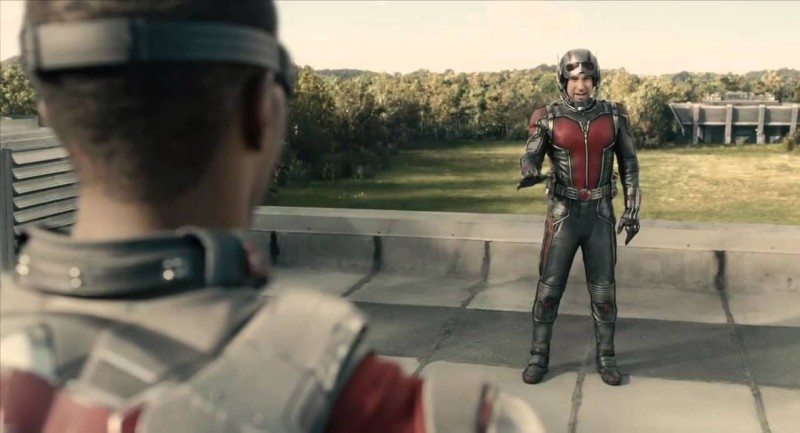 Stan The Man’s ANT-MAN cameo is quicker than most of his film roles, playing a bartender in an amusing scene with some of Luis’s colleagues.

READ: Check out our original review of ANT-MAN here.

I went into ANT-MAN with relatively low expectations, as I’m not a huge fan of the character, but I came out of the theater thinking the film was the best non-Captain America solo film Marvel Studios has produced. There were two major reasons for this, the first being the way ANT-MAN subverted the typical Marvel formula. While there were certain origin story tropes present, a majority of the film played out like a classic heist film like OCEAN’S 11 as opposed to more standard comic book film fare. Some of the credit for this should go to former writer/director Edgar Wright, who worked on the film for years before leaving the film due to creative differences and being replaced by Peyton Reed.

The second reason I loved the film was the spectacular cast. Paul Rudd is up there with Robert Downey Jr. and Chris Pratt in the upper echelon of Marvel’s casting decisions. He completely owns the character of Scott Lang, bringing humor and likability to the role without sacrificing emotional depth. The rest of the main cast deliver swimmingly as well, especially Peña, who takes a character in Luis who could have easily turned into an annoying joke and makes him the movie’s best source of comedy. 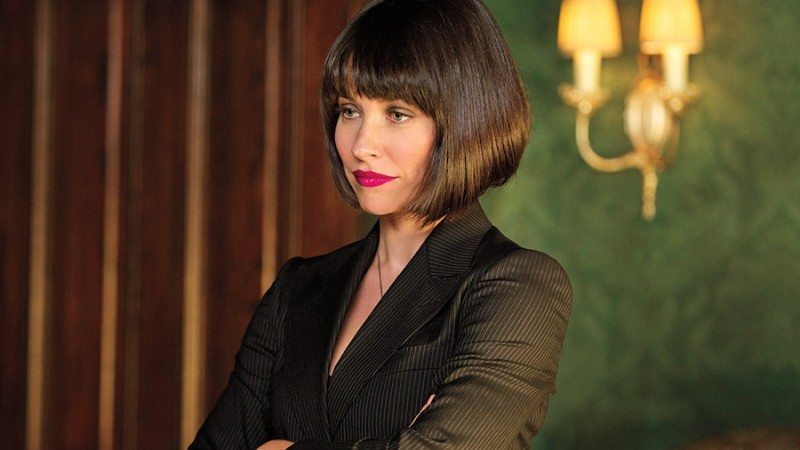 All that said, the film isn’t perfect. Yellowjacket suffers from a bit of the blandness that seems to hamper many of the MCU’s antagonists. Also, while Evangine Lilly delivers a strong performance as Hope van Dyne, the character is vastly underutilized. In my opinion, there was no reason she couldn’t have donned the Wasp costume for the film’s climax. Those critiques aside, the biggest issue with the film is tonal, I would argue thanks to the change in director. There are story elements that were clearly part of Wright’s earlier, stranger drafts that fit awkwardly with the later, more standard MCU fare that was added late in the preproduction process.

It’s tough to truly gauge the full extent of ANT-MAN’s impact on the MCU, as it’s still the most recently released film in the studio’s canon. The largest immediate impact it had was introducing ANT-MAN to the greater world of The Avengers through his interactions with The Falcon. This will be picked up immediately, as Scott Lang has been confirmed as being part of Captain America’s team in the upcoming CIVIL WAR.

The film introduces two elements that may be picked up on in later films, as well. The first is the revelation that S.H.I.E.L.D. employed Hank Pym during the Cold War, potentially opening the door for stories and characters set between the freezing of Captain America and the emergence of Iron Man. The second is the revelation of the quantum realm. Other realms and dimensions have been a large part of continuity for decades, and ANT-MAN introducing them to the MCU could mean big things for several Marvel properties, including the upcoming DOCTOR STRANGE.

In a lot of ways ANT-MAN was a new beginning for the Marvel Cinematic Universe. It introduced new characters in a new style and sets up numerous possible directions for the MCU going forward. It’s still somewhat mysterious which of these directions the narrative will go, but the first answers will be revealed in CAPTAIN AMERICA: CIVIL WAR.