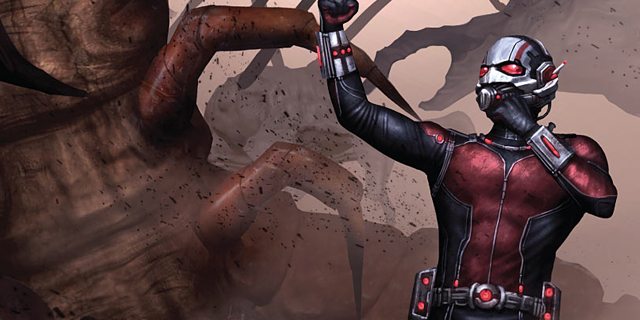 This July, Marvel is releasing Ant-Man in theaters so a one-shot prequel comic sounds like a great way to introduce readers to the character right? That idea follows some sound logic, but ANT-MAN: LARGER THAN LIFE #1 fails to do anything but introduce people to the bare minimum traits of Ant-Man.

Scripted by Will Corona Pilgrim, this isn’t necessarily a bad comic book by any means. But it’s not a good one either. The first real misstep is that this book doesn’t even follow Scott Lang, the Ant-Man everyone is going to be introduced to in a month. This story revolves around a younger Hank Pym (which is only evident because of his 80s style sideburns) testing out his new EMP Communication Device with a colony of ants. The issue has him donning his suit, controlling ants, and shrinking down to ant-size.

If this book does anything successful, it at least introduces fans to Ant-man’s unique power set. My one real gripe with the script is that Hank doesn’t have anyone to talk to. It mostly consists of Hank talking to his voice recorder about his experiment. It’s incredibly dry and doesn’t shed light on any of the intricacies of the original Ant-Man. This doesn’t touch on any of his crippling guilt, devotion towards his wife, or responsibility as a founding Avenger. He’s just a…guy.

The Art in ANT-MAN: LARGER THAN LIFE #1

The art by the team of Andrea DiVito on pencils and Veronica Gandini on colors is serviceable. Just like the writing, the art isn’t bad but it’s also nothing to write home about. Most backgrounds are very minimal, without much detail going on at all. Some backgrounds are even just solid colors. DiVito also is tasked with drawing Hank Pym in the Marvel Cinematic Universe’s version of the Ant-Man suit. His interpretation of it is very movie-accurate, but the full helmet that also covers Hank’s face leaves Ant-Man expressionless for a majority of the comic. These issues aside, DiVito can draw a mean looking ant. I guess that’s a plus.

Backing up this issue are two reprints of Tales to Astonish by the legendary team of Stan Lee and Jack Kirby. The reprinted stories retell the original appearances of Hank Pym and his superhero identity, Ant-Man. I think it goes without saying that both issues are gorgeous, although I’ve never really been a fan of digital coloring over Kirby’s fabulous art. The issues are wordy for sure, but it’s always fun to go back and read some good old fashioned science fiction pulp.

In the end, the main story of ANT-MAN: LARGER THAN LIFE #1 doesn’t shine as the best introduction to Ant-Man. It’s also not the worst comic to ever grace store shelves. The added bonus of two reprinted Lee/Kirby issues might justify this books $3.99 price tag.