Taking inspiration from the damsel in distress trope seen in so many video games, ANOTHER CASTLE: GRIMOIRE answers two big questions: what’s the princess doing while waiting to be rescued? And what if she was the hero of the story?

The aforementioned princess, Princess Misty of Beldora, longs for the freedom to choose how she lives her life, but often finds herself cooped up in the castle instead of out defending the kingdom. When she’s captured by Lord Badlug, the ruler of Grimoire, she gets a chance to do just that. He plans to marry her and take over Beldora, and Misty is more than willing to deny him and escape. But Beldora’s not the only kingdom in jeopardy, leaving Misty (and some new friends) with the task of saving the day for everyone.

The trade for ANOTHER CASTLE: GRIMOIRE will be released on February 15, 2017. In anticipation of this, ComicsVerse spoke to writer Andrew Wheeler and artist Paulina Ganucheau about the book’s visuals, the political nature of stories, and what readers can do to support books for girls. 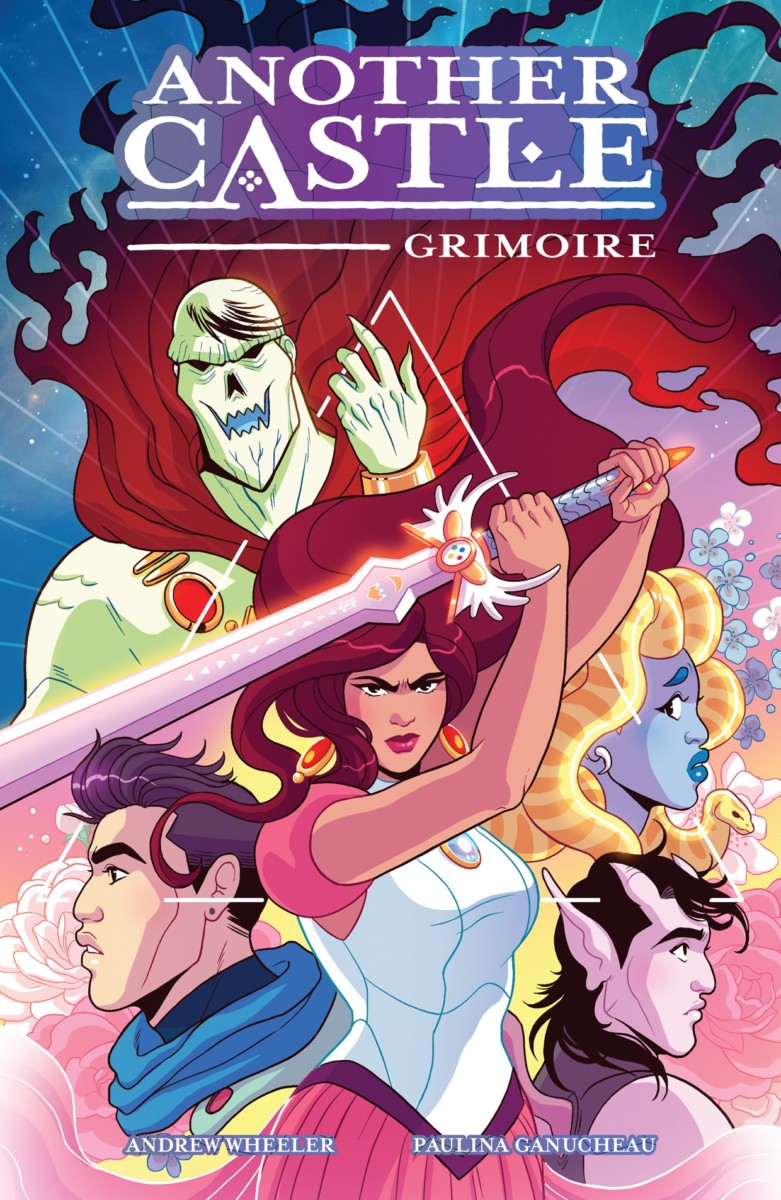 ComicsVerse: Though I knew the book was going to subvert the damsel in distress trope, I was surprised by the other ways you played with the typical fantasy formula. It’s not as simple as Princess Misty killing Badlug and returning home. Aside from being something that we don’t get to see often, why did you explore this aspect of the story?

Andrew Wheeler: The root of the story is the idea that the “damsel in distress” is the hero of her own story, so rather than have her break out — at which point she’d become the star of a different type of story — I wanted to give her a reason to choose to stay in captivity, and to bring down a despot from inside his own castle.

It was also important to show that she could break out if she wanted to, of course. Heroes make difficult choices, and the choice that Misty always faces is whether to head back home to the people she loves, or save these people who are very much strangers to her. A princess who saves herself is a neat subversion of the idea that princesses are there to be saved, but I needed to go further and have a princess who saves everybody.

CV: You’ve talked before about how the two of you were introduced by Oni Press, but what was the collaboration like? How did the story and visuals change from your initial pitch to the publisher?

AW: Because Oni put us together, there was no fixed aesthetic for the book when I came to Oni, and I think it could have gone in a lot of different directions. I always had a vague idea of what everyone might look like, but then Paulina drew her versions, and I can’t even remember those other versions anymore. Paulina’s designs are exactly who these characters are.

What’s great about working with Paulina is that she really understands character, and she really brings the characters’ personalities to life, so she can create this gorgeous fairy tale world and infuse it with layers of drama and humor and pathos. It’s amazing!

Paulina Ganucheau: Aw gosh! Andrew, you’re too kind. I’m so fortunate I was given the chance to fully develop this world visually from the ground up. What an amazing experience it’s been.

RELATED: For more on Oni Press’ current series, check out my interview with Ulises Fariñas on MOTRO. 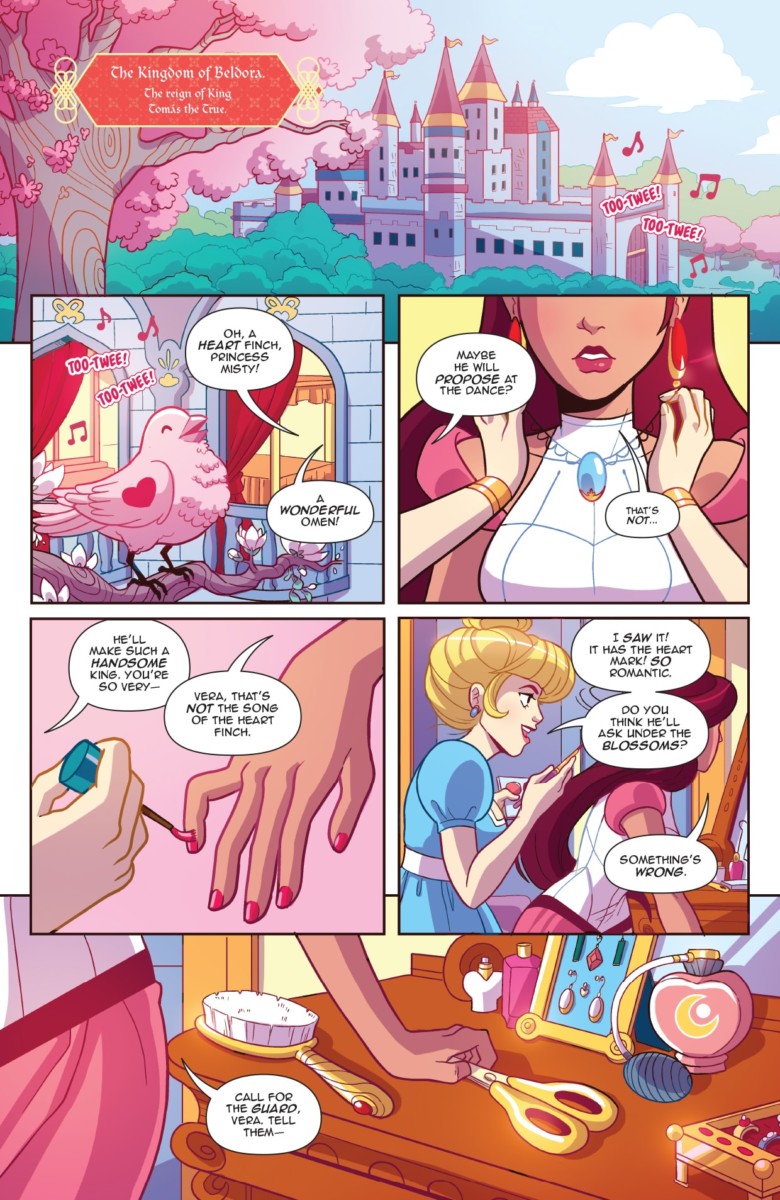 CV: Regarding the book’s visuals, it could have easily been incredibly silly, but the fact that Badlug still has a bit of hair on his head really completes his look. How do you know when a character design, or even a panel, is finished, Paulina?

PG: I’m so glad you like his last shred of humanity being represented by a few wisps of swooped bangs as much as I do! I would say the levels of “finished” vary greatly from a character design to a finished panel. A finished character design, to me, can still have flexibility from when you first finish their design to when you draw them in the actual book. It’s important to keep them open and free to evolve as you grow as an artist! Your fully completed design for a character shouldn’t be set in stone. You can literally watch Misty change in this series as the story progresses outside of just her character development, but just from me growing as an artist.

A finished panel is a whole different story. Sometimes panels just never feel finished or right, but you have to move on anyway. Comics are all about that balance of knowing when to pull your punches. Not every panel is going to be your best, but it’s important to remember that there will at least be some panels you love!

CV: You illustrated and colored both ANOTHER CASTLE and ZODIAC STARFORCE. How did your approach differ with this project?

PG: The content of the two are so different so it was easy to maintain variation. Style-wise, they’re pretty similar since both of these projects were done so close together (and both were just drawn in my regular style, haha), but I would say the most noticeable difference between the two are color palettes. ZODIAC STARFORCE stays very much in a pink/purple tonal range while ANOTHER CASTLE lives on a broader spectrum. Throughout the story you’re moving from place to place in this fantasy world, so there are many chances to showcase a myriad of color palettes. Working on ANOTHER CASTLE has really made me want to stretch my skills more and more into places I’ve never been before!

CV: In your interview with The Mary Sue for ZODIAC STARFORCE, you said that “origin stories are OUT,” and ANOTHER CASTLE certainly isn’t about Misty learning to be strong — she already is. What would make you interested in doing an origin story?

PG: I definitely wouldn’t be against doing an origin story! Especially with Misty. I’d absolutely love an issue zero of her younger days. I think it’s just the way most origins are presented. I’m excited to see people jumping right into stories and leaving the origins to our imaginations. Audiences are smart! They don’t always need a play by play, but sometimes it’s still fun. 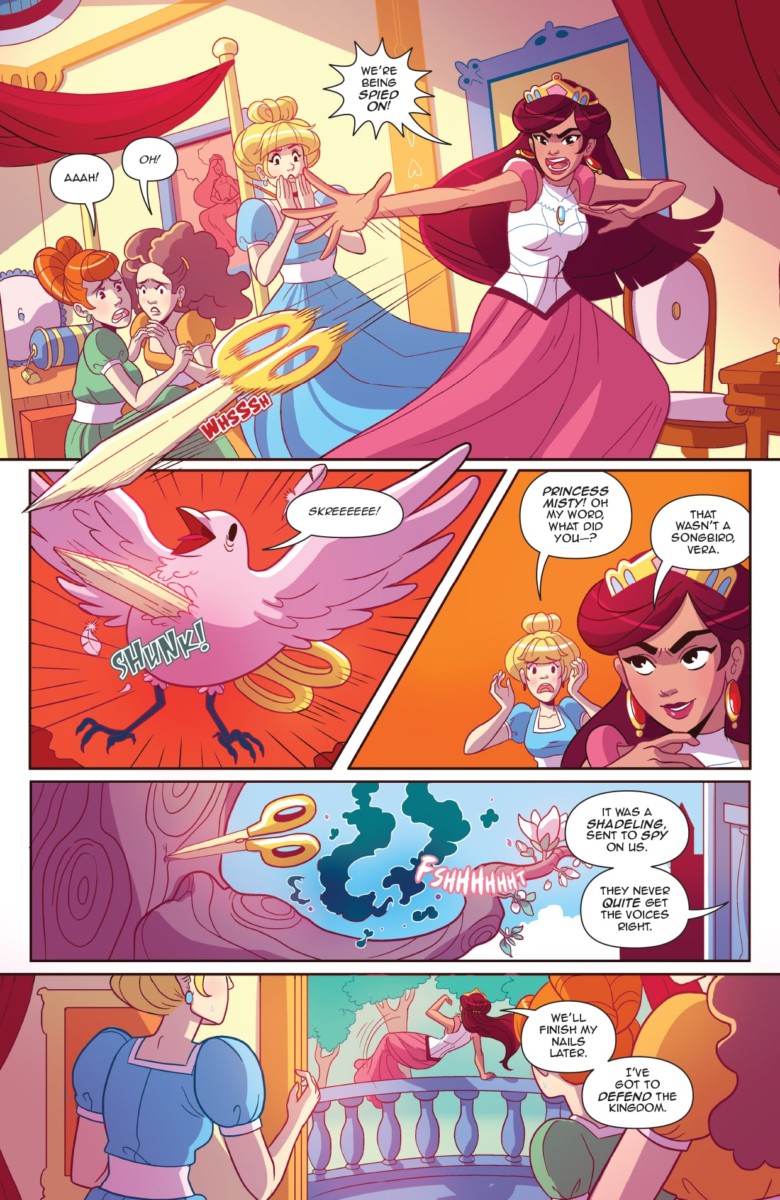 CV: There’s an awesome moment at the beginning of this book where Princess Misty asks General Elias for his sword, but he’s not carrying one. It’s a smart and subtle way of saying that not only can women be badass, but men — not even generals — aren’t always action heroes. Andrew, how did you go about integrating social messages into the book without feeling like you were standing on a soapbox? And what advice would you give to creators trying to do the same?

AW: Well, I don’t mind a little bit of soapboxing; we do have a character standing on a soapbox and giving a speech in the middle of a town square, but the only people listening are two kids and a dog, which is always a danger when you’re trying to change the world!

But every author has a point of view. Every story is political, because you’re presenting an idea of what the world looks like, and then expressing a view on what does and doesn’t need to be fixed in that world. That’s politics. If the heroes in the story are all men, and their trophies are women, and that’s portrayed as a desirable way for things to be, you’re making a statement. So I think creators need to understand that you can’t walk away from politics in fiction, you can only show your complacency with the political status quo.

Once you’ve accepted that, you can get on and tell the story you want to tell. It doesn’t need to be didactic or heavy-handed. This is a funny, exciting, action-packed story. Knowing what you want to say doesn’t limit the ways you can say it.

RELATED: Want to see more examples of how it’s done? Check out how Hayao Miyazaki has embedded feminist messages into his films.

CV: The book blends a lot of humorous or silly elements with serious ones. How did you strike that balance?

AW: I always try to take my characters seriously, even when the situations they’re in get absurd. The characters can be funny in a lot of different ways; Fogmoth is naively sweet-natured, Pete is brazenly over-confident, and Misty is dry and acerbic. If I stay true to the characters, and what’s uniquely funny about each of them, I get to have moments of humour and still come back to those same characters for moments of sadness, or fear, or righteous anger. All of those moments are all equally true to these characters.

CV: ANOTHER CASTLE was your first major comics work, Andrew. What did you learn while working on the book?

AW: Oh, just everything. I mean, I came into this having written a lot of prose, a lot of journalism, and a few unpublished scripts, and I’ve been lucky enough to study comics writing under Ty Templeton, who is a storytelling genius and an amazing teacher. But even with everything I’ve learned before, there’s nothing more educational than writing a script that actually makes it all the way to print!

But working with great people means that anything I got wrong was addressed by our editor Ari, or by Paulina, and fixed or improved well ahead of time, so readers can feel confident that even if this is my first comic, it’s a really fantastic one! 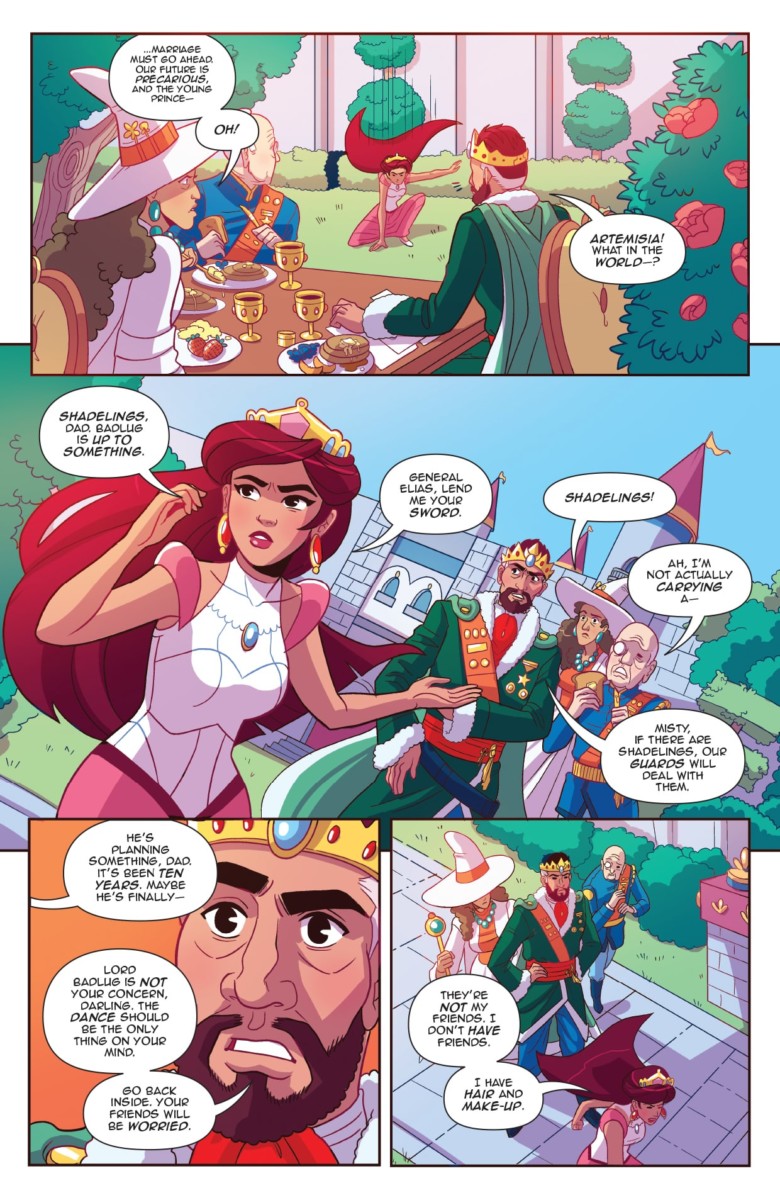 CV: Andrew, you’ve mentioned Faith Erin Hicks and Raina Telgemeier as “standard bearers” when it comes to proving there’s an audience for girl-oriented stories. Could both of you name some other creators and books readers can support for this kind of content?

AW: I was just going to say; at the top of the list is of course ZODIAC STARFORCE by Kevin Panetta and, oh hey, Paulina Ganucheau! That’s an amazing and empowering book for girls. Oni also has a bunch of books that sit perfectly right alongside what we’re doing with ANOTHER CASTLE, like PRINCESS PRINCESS EVER AFTER, SPACE BATTLE LUNCHTIME, and MIGHTY ZODIAC, and when you look at those alongside CUCUMBER QUEST, BACKSTAGERS, SQUIRREL GIRL, GOLDIE VANCE, and MOON GIRL & DEVIL DINOSAUR, I think it’s clear that we’re in a moment for conscientious, forward-thinking, and incredibly charming books for readers of all ages – up to and including adults who want some really strong, smart, charming stories to escape into.

RELATED: Our thoughts on the first four issues of BACKSTAGERS.

CV: Aside from monetary support, what can readers do to encourage the comic book industry to grow and embrace these books?

PG: Spread the word of books that are doing the industry right! Remind publishers that comics aren’t just for straight men, that there are droves of hungry readers waiting for stories about them by like-minded people. Let’s lift up those creators and their books!

AW: Yes! Share and spread the word. Become an advocate for the work you want to see in the world. Buying a book for someone is great, but if you can’t afford to do that, you can still show your support by taking to social media, or posting a review to Goodreads or Amazon. It makes a huge difference, and we really do appreciate it!

This interview has been edited, and the order of questions has been altered slightly, for your enjoyment.