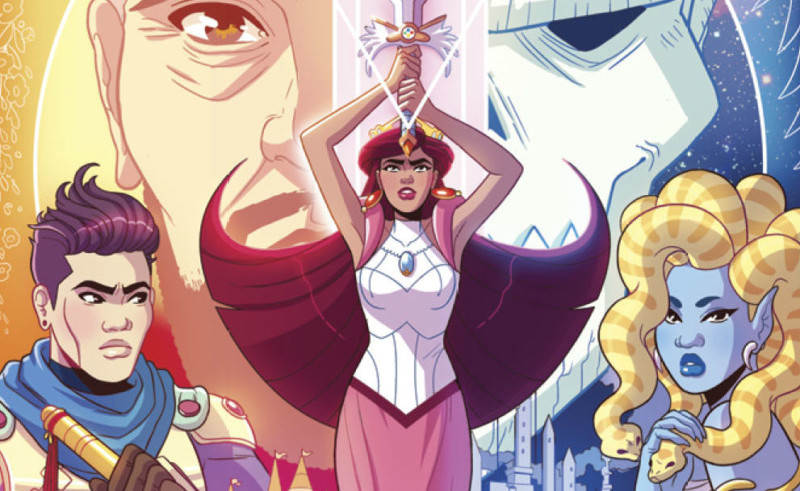 Princess stories sometimes get a bad rep. Those princesses of the Disney Company’s creation get ridiculed for encouraging passivity and merely waiting for a prince to come save the day. This leads young girls to believe their greatest worth lies on the arm of someone else. Fortunately, things are changing and as these older narratives get phased out in favor of new ones. Say, “good riddance,” to fairy tales of the past with the unconventional story of ANOTHER CASTLE #1. Created by Andrew Wheeler and Paulina Ganucheau, this story takes the visual trappings of older Princess stories and completely turns them on their head. While the series has already concluded, the first issue’s rerelease is right around the corner. The perfect time for anyone curious about the series to check it out.

A Princess Actually Doing Things in ANOTHER CASTLE #1

The story in ANOTHER CASTLE #1 is fairly straightforward: Princess Misty is dissatisfied with the prospect of having to marry a doofus, Prince Pete. She knows she’s much more qualified to handle threats than he is, yet ultimately he’s the one who’s destined to protect her kingdom. Misty shows off her capability when she spots a threat within a singing bird and kills it with flying scissors, causing the bird to dissipate. This indicates to Misty that the bird was, in fact, a spy from the kingdom’s mortal enemy: Lord Badlug. So, being the strong-willed princess she is, Misty grabs the mystical sword Leveler to set out to kill the powerful enemy. Her adventure is cut short though when a dubious old lady captures her to make Misty Lord Badlug’s bride. From there it is the princess’ sole mission to escape the lord’s clutches and save her kingdom.

Already ANOTHER CASTLE #1 tries to set itself apart from other fairy tales. It really hammers in that Misty is “not like other” princesses that most readers are familiar with. It doesn’t necessarily do anything different with this subversion to the classic fantasy tropes, but it doesn’t really have to. Misty appears strong and capable, but her wits impressed me the most. She’s a natural leader; it only makes sense she wishes to lead on her own without the aid of Pete. Pete’s harmless enough; he’s just not as capable as she. That’s where Misty’s understandable frustration with having to marry him comes in. She doesn’t want to have to stand passively as those less qualified attempt to run the kingdom she loves.

READ: Want to know more about the creators of ANOTHER CASTLE? Check out our interview with them!

Paulina Ganucheau doesn’t shy away from traditionally “female” colors. The panels are littered with pinks and purples and everything you’d expect to see in the Walmart aisle with toys aimed at girls. While this oversaturation of girly might at first seem like a hindrance to ANOTHER CASTLE #1, overall it does a nice job showing that just because Misty is a feminine-presenting princess doesn’t mean she can’t be strong and fight. She’ll clobber goblins with the best of them, and she’ll do it in a pink flowing dress if she sees fit. The characters are all very cute in terms of design. It’s a comic for younger audience members, visually identifiable through the character models. Yet the action is just as advanced as any superhero comic.  I jumped when I saw how the scissors she aimed at the bird-spy flew off the page.

A lot of recent kid’s media has attempted to switch up the princess formula. Movies like ENCHANTED outwardly make fun of old tropes of the prince saving the day. The movie has the princess defeat the mighty dragon and shows off how ridiculous the notion of true love is. ANOTHER CASTLE #1 isn’t quite as concerned with showing love’s effect, but rather Misty’s ability to lead.

While it doesn’t do a whole lot new in terms of subverting fairy tale tropes, it’s nice seeing a princess who’s natural born leader in a submissive role overcoming her society’s expectations. If she’s going to accomplish anything, it’ll be with her own wit and skills. Her strength lies in her ability to lead and inspire those around her to action.

Monsters Can Be Friends?

While Misty does attempt to escape Lord Badlug’s lair, those she meets within his castle are extremely charming. These are the likes of Gorga, the gorgon attendant, and the scone baking jailor Fogmoth. Both of them show how kind monsters are when given the opportunity. They try to comfort the princess, for they know how difficult Lord Badlug is. In their kindness, she learns how important the union between her and the evil creature is for the safety of monster kind.

In a startling revelation, she learns that she’s not the first princess the evil creature’s ever captured. He was the demon who stole Misty’s mother away. Yet when her mother tragically died, the Lord grew enraged and destroyed the previous inhabitants of his lair in his fury. In order to save her newfound friends and learn more about her mother, Misty decides not to escape that night and instead find a way to ensure the safety of monster-kind while getting vengeance for her mother.

READ: Need more subversive fantasy stories? LADYCASTLE might be just up your alley!

Misty has a lot to learn from the monster world as evident through her new companions. She’s strong, but what’s truly impressive is she learns. Yes her strong will got her into this situation in the first place, but she’ll often make amends from her past actions once she learns how they’ll affect others. Her character is already growing in ANOTHER CASTLE #1, implying she’ll continue changing for the better throughout the other issues. There’s no better time to pick up this tale as Oni Press plans on rereleasing ANOTHER CASTLE #1 for one dollar, found in a comics shop near you.