Bela Lugosi, Christopher Lee, Frank Langella, Jack Palance, and a cadre of actors have donned the fangs and cloak of the dreaded Count Dracula over the years. He has been part of the national psyche since 1897 when Bram Stokers’ novel, DRACULA, was published, releasing the bloodthirsty aristocrat on an unsuspecting public. He has given many of us nightmares and terrified purveyors of the horrific in various media. Thankfully, he has always been defeated, usually at the hands of Abraham Van Helsing, one of the heroes of the original novel, or a descendant of his. But what if Dracula wasn’t so easily defeated? What if the Count dispatched his foes these heroes and Stokers ending never happened? Titan Comics is publishing just such a “What if?”, an official installment in the ANNO DRACULA series of novels written by Kim Newman. ANNO DRACULA 1895: SEVEN DAYS OF MAYHEM #1 is being released on the 22nd of March. We talked to the creative team behind this new series: writer Kim Newman, artist Paul McCaffrey and colorist Kevin Enhart.

ComicsVerse: First of all, Kim, for those who are not aware of the ANNO DRACULA series, would you be able to give a little background on it?

Kim Newman: It’s a sequence of novels — and a few novellas — that’s been running since 1992. The premise is that in 1885, as in Bram Stoker, Dracula moved from Transylvania to Britain… however, in my book, he defeats Van Helsing and the other vampire hunters, rises to power by marrying Queen Victoria, and transforms the country by encouraging vampires to live openly and facilitating the spread of vampirism throughout society. Since then, I’ve followed the story through subsequent years and expanded the series by looking at different places and times — THE BLOODY RED BARON is set during World War One, VAMPIRE ROMANCE is an English 1920s country house mystery, DRACULA CHA CHA CHA in Rome in 1959, AQUARIUS in swinging London and JOHNNY ALUCARD from 1945 till 1990-ish. I’m currently working on a diptych of books set a hundred years apart in Japan. 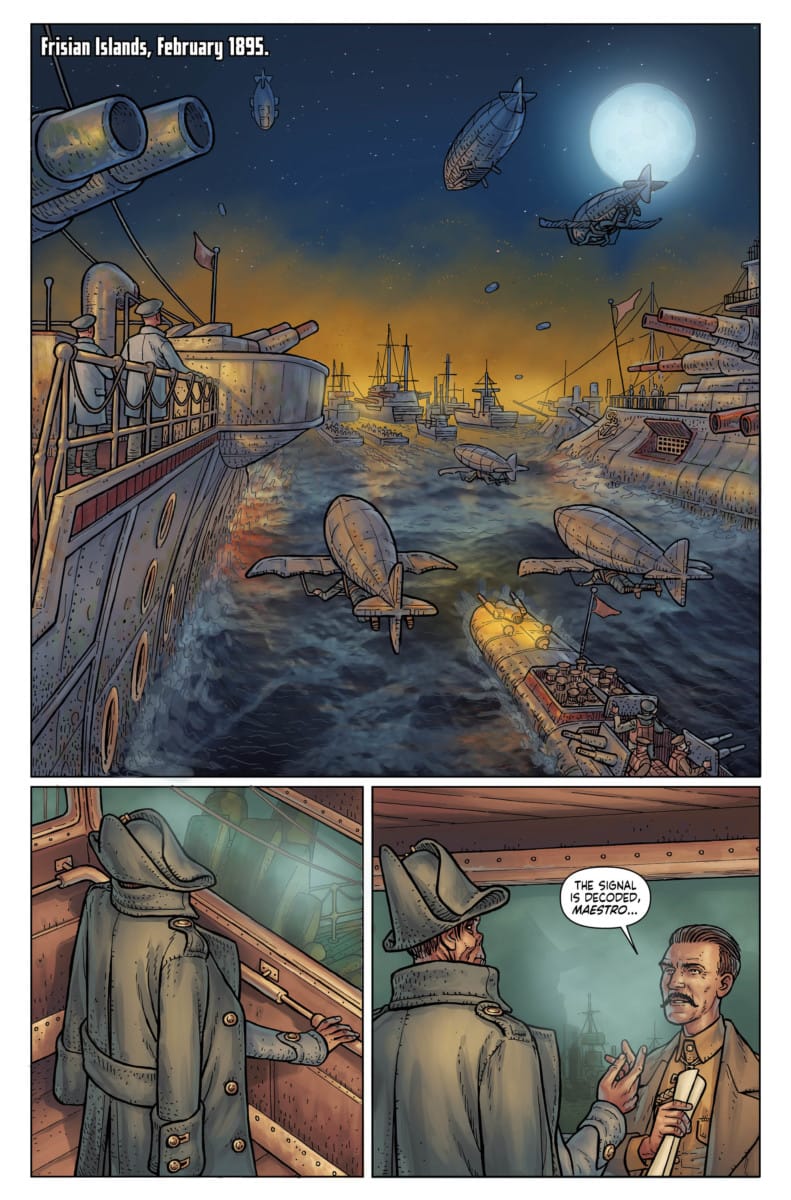 CV: What can we expect from ANNO DRACULA, 1895: SEVEN DAYS IN MAYHEM? Kate Reed seems to be taking the lead in the story. Can we expect to see any of the other main characters, Charles or Genevieve, popping up?

KN: Kate and Penelope Churchward are major characters in the series, and they carry much of the story this time — though I’ve given a bit more room to the Daughter of the Dragon (she has several other names), who has been in a couple of the books, and brought in some new players who might well stick around. I’ve tried for a mix of carried-over and new characters; I wanted to give Graf von Orlok, the vampire from Nosferatu, a presence because he’s got such a great look. We don’t get that much of Dracula himself, and he stays in the shadows or manifests in different forms, so Orlok makes a good, stable monster in the series to have as a poster boy for evil old vampires. Charles and Genevieve are perhaps busy elsewhere, though I’ve definitely got them saved for future installments.

CV: What was the inspiration behind adapting the series to the comics medium?

KN: I’m afraid it’s as simple as the fact that I brought the novel series to Titan and they also publish comics. Nick and Vivian, the Titan supremos, were keen on doing some brand synergy with the property, so a comic seemed a solid idea. I’d like to go for action figures next. Or at least novelty tableware. Over the years, there has been some interest in doing a comics adaptation of the novel, but I’m not personally keen on those comics which are just chunks of a pre-existing novel doled out as picture captions. So when Titan said I could write a new story — and I held out to be allowed to write the thing myself — I was happy to commit, though it’s taken a while to get together.

CV: Were there challenges in moving from the novel format to producing a comic book?

KN: I co-wrote [with Maura McHugh] a HELLBOY spinoff (WITCHFINDER THE MYSTERIES OF UNLAND) for Dark Horse two years back, so I’m not a complete newcomer to the medium — though this is my first solo writing credit and also my first comic version of my own fictional universe (much, admittedly, borrowed and adapted from other folks). There are rigidities to comics that don’t apply to novels — my instinct was to ask for a whole extra issue for an epilogue, but instead, Titan gave me three extra pages. And the pacing is different.

CV: Is it a series new fans could dip into without any prior knowledge?

KN: I hope so. I think it’ll help if you read the first novel — this miniseries takes place in 1895, seven years after Anno Dracula, but before all the other books in the series. However, I’ve included a flashback to explain the premise… and I’ve also been a bit reticent in going over old ground so as to preserve the surprises of Anno Dracula for new readers who enjoy the comic and want to move on to the novel afterward. I also hope that people who are following the novels will pick up the comic — not only is it a new story, but it has actual developments in the overall plot. What happens in the novel I’m working on now grows out of what happens in the comic. 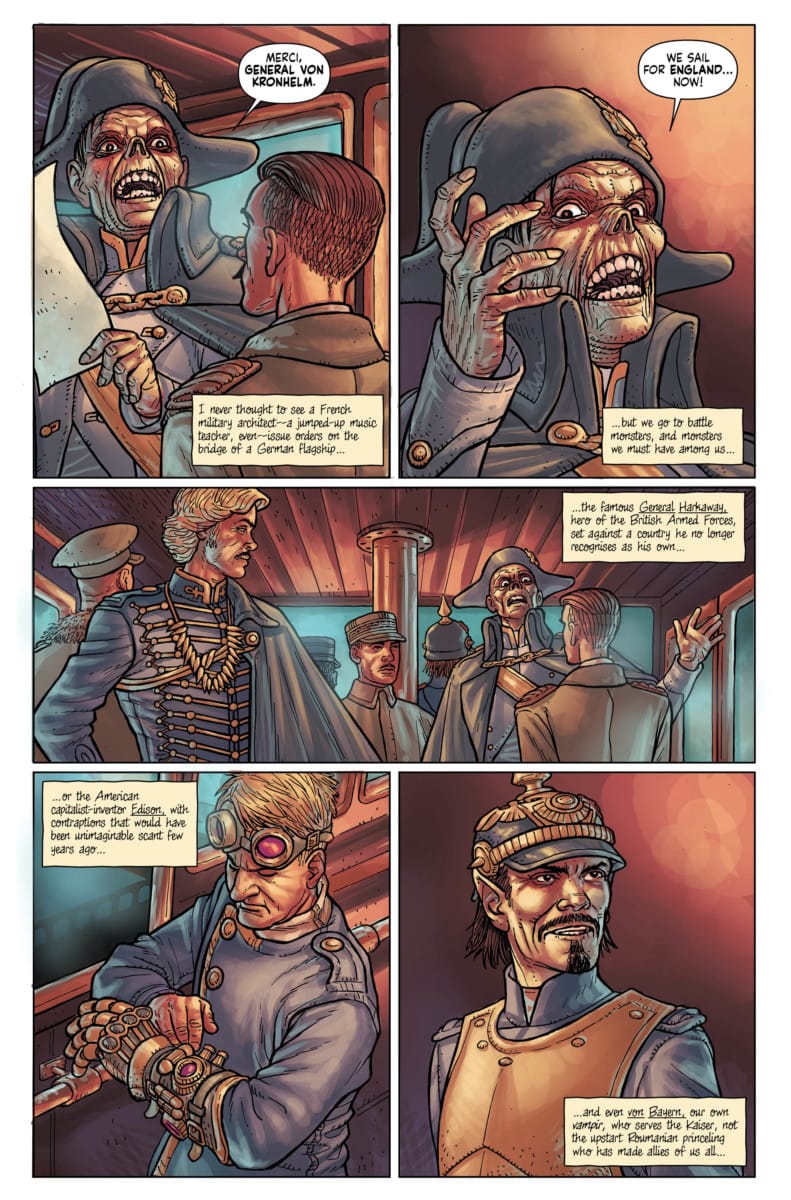 CV: Paul, what did you know about the series beforehand?

Paul McCaffrey: I’ve been a fan of the Anno Dracula series since I came across Red Reign (the novella which Kim expanded into the first Anno Dracula novel) in The Mammoth Book of Terror. I read that, and I was hooked! So, I was familiar with the basic premise and the major characters, at least.

WATCH: We give you a taste of new vampire film: THE TRANSFIGURATION!

CV: Kevin, the series is set in 1895, how essential was it to capture the colorful aesthetic of this period?

Kevin Enhart: It was crucial, for many reasons: first, Kim has a real and coherent universe in Anno Dracula, so did Paul with his brilliant art. It’s not just realistic; the places the characters go are, mostly, real. So we have to find that in the colors as well. Also, I have been lucky coming on ANNO DRACULA at the very beginning of the project: Paul was still looking for the right aesthetic style so, with our editor David Leach, I could take my time to define the colors and set the ambiance. Something stylized, but not too much; desaturated but not too much. The main challenge was to keep consistent with the novels and the characters Kim has created. This is not an adaptation, but an all new story in an established universe: being precise is important.

CV: The novels have, at times, been stomach churning in terms of horror and violence. Will the art/color push that kind of horror to the fore or will it be more subtle?

PM: I don’t think the comic is an out-and-out gorefest, but I don’t think we shy away from the more visceral aspects, either. What’s a vampire story without a little blood? It’s all done in the best possible taste!

KE: The first thing I can say is that the comics will definitely have its part of violence and blood. By my side, I think the first edit I had to do was to make the blood… more bloody. More visible. The blood is more present from the second issue, and some scenes will go quite bloody, so I did these scenes as naturally as possible: if we have to see some character’s guts or ribs, the colors have to follow that. And I color those elements with pleasure. But even without that violence, Paul’s art has something organic, and you know that blood is never far. Keeping that in mind is a part of my work. 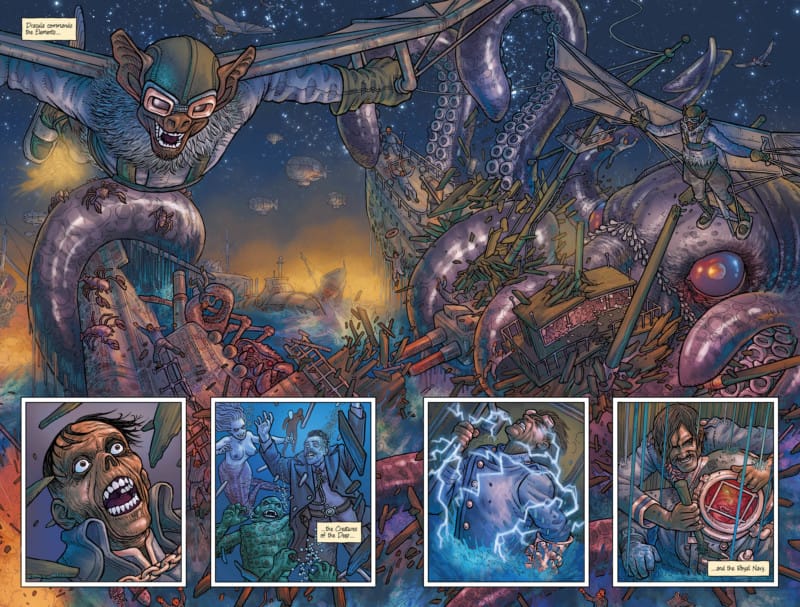 CV: While it’s clearly set in a fantastical world, it also feels quite real and rooted in history. How did you approach balancing these different aesthetics in the comic?

KE: The fact that that era and most of these places have actually existed, I don’t know if it’s because I’m French, but most of my imagination about the Victorian era only comes from movies: these foggy places, the dark and dusty streets. So giving such style and aesthetic to the comics was not so hard for me.

PM: I see the Anno Dracula series as being alternate history as much as fantastical horror — we’re dealing with Victorian London, not Westeros or Mordor. So, I wanted to ground the story in a real, recognizable world, and I spent a lot of time trying to get the period detail right. As Kevin points out, though, much of our understanding of the Victorian era comes from fictional representations, and I wasn‘t going to let reality get in the way of a cool visual!

CV: Before we wrap up, are there any other upcoming projects you’d like to share with us?

KE: Beside ANNO DRACULA, I have the pleasure of visiting the world of WARHAMMER 40.000, still with Titan, on their new series coming next month from writer Ryan O’Sullivan and artist Daniel Indro. A giant leap from ANNO DRACULA, but I love both these worlds.

PM: ADLER — WOMAN OF MYSTERY should be out next year, written by Lavie Tidhar and published by Titan. Then I’m going to finish Fawkes of the Air Ministry for David Lloyd’s Aces Weekly.

KN: My play, Magic Circle, will be produced sometime this year. I’m working on a new Anno Dracula novel, title to be determined – due out this Autumn from Titan.

ANNO DRACULA, 1895: SEVEN DAYS OF MAYHEM will be released on March 22nd. If you want to keep up to date with their work, you can follow Kim on Twitter @AnnoDracula, Paul at www.coroflot.com/paul_mccaffrey and Kevin @kevinenhart.