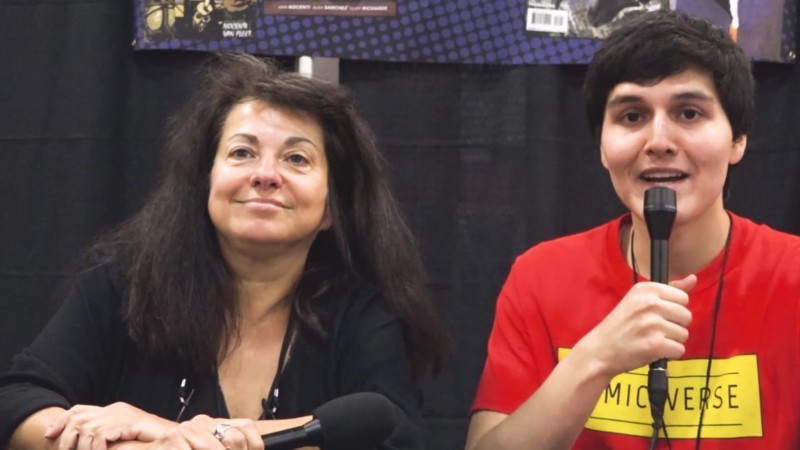 On April 29th – 30th, ComicsVerse attended East Coast Comic Con in New Jersey. While there, we had the opportunity to interview writer, editor, teacher, and filmmaker Ann Nocenti.

Ann and I talked about her focus on the problematic issue of collateral damage in her DAREDEVIL run in the late 1980s to the early 1990s. She mentioned how she did not have much of a background in comics when she first began writing superhero comics. This provided her with more of an outsider perspective than most comic book writers who grew up reading comics. Next, we followed up with a question regarding her new 52 CATWOMAN run. Nocenti stated that she wanted to focus on Catwoman’s earlier years as thief and show her progression into the professional antihero everyone knows her as. Finally, Ann Nocenti gave advice to aspiring writers who hope to write comics one day.

Ann Nocenti is best known for her work in Marvel’s DAREDEVIL and LONGSHOT. Nocenti and artist Arthur Adams created Longshot for Marvel. Nocenti would also go on to create various other Marvel characters, such as Typhoid Mary, Blackheart, Mojo, and Spiral. When working as an editor for Marvel Comics, she edited NEW MUTANTS and UNCANNY X-MEN. As for DC Comics, Nocenti has written KID ETERNITY, JOKER’S DAUGHTER, KATANA, and CATWOMAN.

Nocenti’s outspoken political views and her focus on the status of women in our society make her an influential and necessary voice in the comics industry. Nocenti would also take a look at the role of the government in superhero stories. In fact, the role of the government in the lives of superheroes was one of the major plot lines in CAPTAIN AMERICA: CIVIL WAR. Ann Nocenti’s perspective is one comics are lucky to have, and we thank her dearly for it.