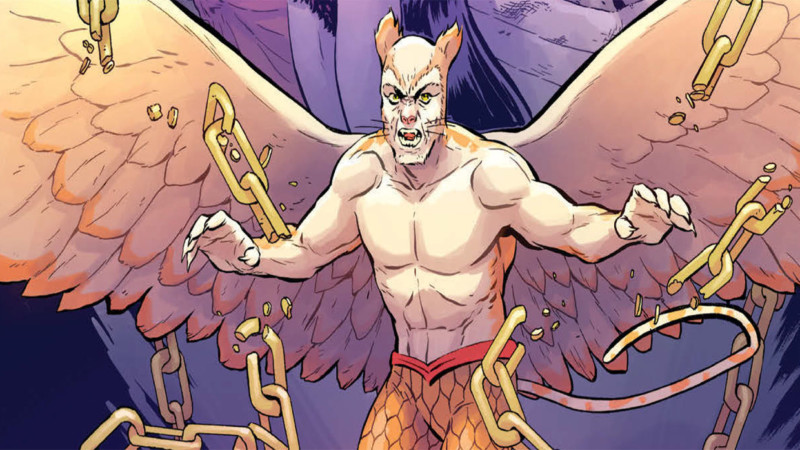 First off, ANGEL CATBIRD vol. 3: THE CATBIRD ROARS is a strange comic. However, it is a perfect addition to the already ridiculous ANGEL CATBIRD canon. The past two volumes have been campy homages to Golden Age comic book heroes (while offering advice on cat ownership safety). The series is peppered with specific and sometimes gratuitous references to feline bodily activity. If that strange synopsis isn’t enough, this series was created by Margaret Atwood. Yes: that Margaret Atwood. This final volume heaps on even more ridiculousness.

If It Ain’t Broke…

ANGEL CATBIRD vol. 3: THE CATBIRD ROARS hits many of the same notes as its predecessors: an evil rat army is planning world domination and only our hero, Angel Catbird, and his half-cat friends can stop them. This is the classic DICK TRACY-style pulp extravagance that characterizes the series. There is action, romance, exotic locations, and vile villains. In the beginning, the evil half-rat Dr. Muroid traps Angel Catbird. Angel’s cat friends — Count Catula, Neferkitty, and Catigula — come to save him. Our part man, part owl, part cat hero does more of what he does best: fighting evil rats.

The rats are bent on world domination. Their end goal is to turn the world’s population into evil rats. Angel Catbird must unite the half-cats, half-birds, and mice of the world to stand up to the rat villains. Atwood’s story is wacky pulp comic perfection. In short, it is standard Angel Catbird. Atwood knows where her bread is buttered and knows not to mess with a winning formula.

The plot is really a second thought, which makes it even more engrossing. This comic is so overly-dramatic and goofy that the stakes are non-existent. The meat of this issue is in the wordplay. The opening line of this comic is “One for owl. All for one.” There is a group of hacker mice called Anonymouse. Atwood knows how to write a groan-worthy pun. Atwood’s ability to think of great puns and then work them backward into the plot is true genius. The story is so engrossing because it is equal parts send-up of the pulp genre and witty wordplay.

In Defense of Atwood

I am an unapologetic ANGEL CATBIRD fan. Atwood and artist Johnnie Christmas have created a tongue-in-cheek series that pokes fun at today’s overly serious comic book heroes. ANGEL CATBIRD vol. 3: THE CATBIRD ROARS is laden with heavy-handed cat puns and an almost incomprehensibly ridiculous plot. Many argue Atwood is wasting her talents talking about cat safety. This criticism is evident in ComicsVerse’s own scathing editorial.

Firstly, I would retort by stating that Atwood’s previous work has done enough to benefit the world. THE HANDMAID’S TALE is more relevant than ever and a touchstone of feminist literature. Atwood’s earned the right to make a goofy comic. Secondly, even if she is phoning it in, ANGEL CATBIRD is still a masterpiece. Francis Ford Coppola made JACK, Jay-Z made MAGNA CARTER, HOLY GRAIL, and Mars, Incorporated once made Strawberry Peanut Butter M&M’s. In short, all great creators are entitled to goofy side projects. Atwood’s just happens to be good.

READ: For an alternative perspective, here is a piece on ANGEL CATBIRD and the problem with celebrity comics! 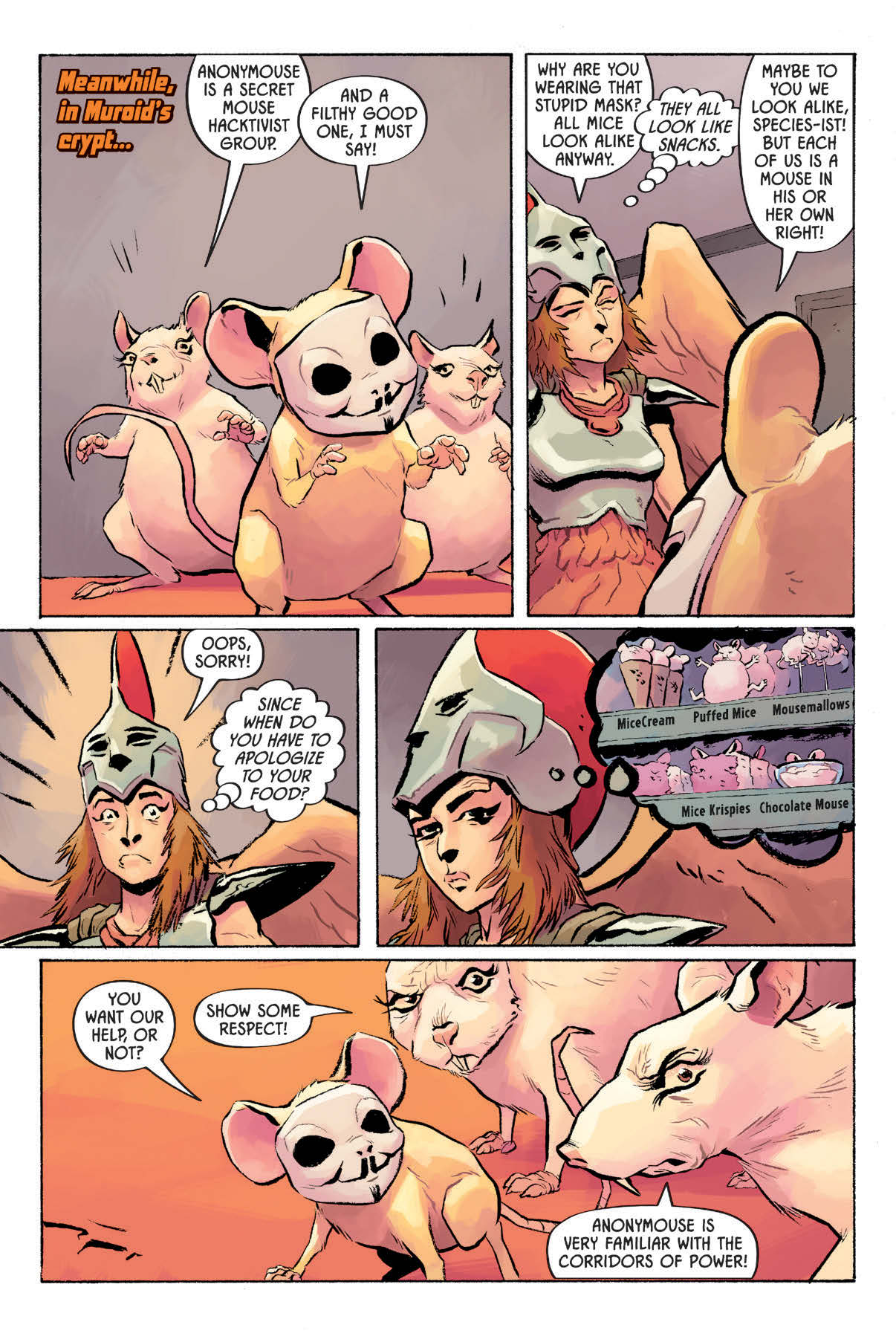 The characters in ANGEL CATBIRD vol. 3: THE CATBIRD ROARS are broad stroke archetypes that service the humor. Angel Catbird is the unsure hero struggling with his new powers. Dr. Muroid is an evil mad scientist. Overall, these characters have not really developed since the first ANGEL CATBIRD. However, the lack of character development does not take anything away from the book. It’s a light read that is meant to be a funny, informative PSA on cat safety. In terms of a teaching tool, each of these characters serves their purpose: to be vehicles for facts on rats, cats, and owls.

READ: Joss Whedon is the Hero the DCEU needs!

In fact, the lack of character development is one of the most compelling aspects of the characters. Atwood is epitomizing the perfect, infallible heroes of Golden Age comics. She is harkening back to a simpler time, where comic books figures like Doc Savage and The Phantom were perfect anatomical and psychological specimens. Villains were unsympathetic and unscrupulous to the core. The characters in ANGEL CATBIRD vol. 3: THE CATBIRD ROAR  are so extraordinarily compelling because they are a snapshot in time. They are a jarring snap back to the one-dimensionality that creators once shackled their characters with. Atwood is showing us how far we have come.

One of my favorite aspects of ANGEL CATBIRD are the wealth of trivia on cat biology. Unlike in the other volumes, ANGEL CATBIRD vol. 3: THE CATBIRD ROARS relies less on small “fun fact” panels on the bottom of each page. Instead, Atwood clunkily wedges them into the story.

Atwood’s forced insertion of facts about mice eating habits and cat parasites is hilarious. As a result, this volume has a real MAD-LIBS style to it. Atwood dials the silliness up to 11 and it works — a broken clock is right twice a day. Atwood’s strange and jumbled up dialogue is right on every single page. On a single page: an owl person calls a cat person “Catty” and “Hissy,” there is a character called Atheen-Owl, and the line “I saw him first! I got him those feather pants.” is uttered. Some puns are sharp, some puns are dumb, but all of them are hilariously awkward.

A Fancy Feast For the Eyes

Overall, Johnnie Christmas continues knocking it out of the park with the art in these books. His bold, bright, cartoony style is perfectly suited for the subject matter. The wide-stanced action poses are exactly what one would see in a Golden Age comic. Christmas’ ultra-stylized characters and big action scenes make the whole book feel old-school, with its thick outlines and a bright color palette.

Most importantly, Christmas knows how to step up the grossness factor when necessary. As many of us cat owners know, cats do some pretty unhygienic stuff. As a result, the rat killing scenes are violent, and for a kid-friendly comic, there is a great deal of blood. Christmas’s art and Atwood’s writing do not shy away from the fact that nature is brutal. These factors make ANGEL CATBIRD vol. 3: THE CATBIRD ROARS a time machine back to the strangest and most memorable time in American comics.

As ComicsVerse’s resident ANGEL CATBIRD aficionado, this book is bittersweet for me. I am glad that Atwood was able to preserve the quality of her work over the trilogy. However, I am sad for it to end. This book is everything. It’s an homage to Golden Age Comics, a PSA on cat safety, an in-depth overview on cat biology, and the pun-filled ravings of one of the world’s best authors. ANGEL CATBIRD vol. 3: THE CATBIRD ROARS is simply a goofy delight that readers should treasure as the hokey masterpiece that it is.

This book resonated with me on a subatomic level. I often compare things I like to THE FAST AND THE FURIOUS franchise. Like those films, this is a piece of art that doesn’t take itself too seriously, and yet the people who made it take their craft seriously. It’s both incredibly dumb yet incredibly well-thought out. It is like when someone takes off the colored stickers on a Rubix Cube and rearranges them to solve the puzzle. Rather than using brute force on a difficult task, they go with a far more entertaining and simplistic approach. It almost feels like cheating. It, like ANGEL CATBIRD, is subversive, ridiculous, and genius all at the same time.