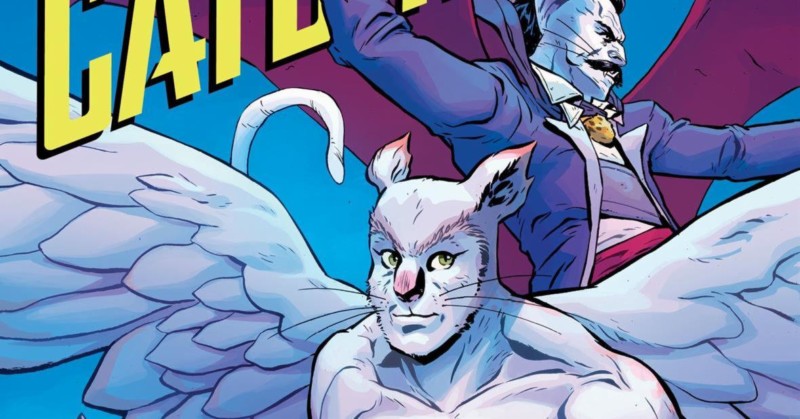 Margaret Atwood is a renowned essayist, novelist, activist, and poet. She has won the Man Booker Prize, the Arthur C. Clarke Award, and the Governor General’s Award. Her novel, THE HANDMAID’S TALE, is now a standard in dystopian, politically-charged literature, up there with 1984. Atwood has recently transferred these decades of literary prowess into a comic book series that is, essentially, a PSA about cat safety. This comic is ANGEL CATBIRD. If all PSA’s were this good, we would have a lot fewer high schoolers smoking cigarettes and a lot more people wearing seatbelts.

READ: Interested in animal issues in comics? Find out more about superheroes and animal rights!

ANGEL CATBIRD, like its chimera protagonist, is a weird amalgamation. It’s part serious animal safety pamphlet, part tribute to strange comics book heroes like Mandrake the Magician and The Phantom, and part parody of the above two categories. In the first volume, Strig Feleedus, an average scientist, was transformed into the Angel Catbird, part cat/part owl superhero. At the end of the first volume, a half-rat mad scientist destroyed a nightclub where the half-cats hung out. The second volume features Angel Catbird and his gaggle of half-cats regrouping and fleeing to Count Catula’s Castle. Count Catula is a human/cat/bat vampire. His name is one of the many masterful cat puns Atwood sandwiches into the book.

Plot-wise, there isn’t much progression, with the story often taking a backseat to fun, snappy dialogue (I lost count, but there must be two hundred cat puns in the volume). Instead, Atwood focuses on fleshing out the backgrounds of the main protagonists. It is somewhat disappointing that there is not much plot development in these issues, considering the fast pace of the previous volume. While it was interesting to learn more about these characters, having them wander around the woods for 80 pages may have not been the most exciting backdrop.

Like in the previous volume, Atwood punctuates this super-hero tale with a series of factoids about keeping indoor cats safe. For instance, when irresponsible owners leave a young cat in the woods, the page features a blurb about the dangers and illegality of abandoning kittens. The animals (and animal hybrids) in this comic are shockingly realistic. The good, bad, and ugly of cats, rats, and birds are laid right out. This strange commitment to the harsh realism of cat ownership and biology is what makes Atwood’s writing shine. The light, fun comic book tropes are constantly being undercut by a harsh biological reality. Angel Catbird’s half-cat friends are bumbling, lovable sidekicks, but they will still try to viciously hunt a helpless baby bird for fun.

Just like in the first volume, artist Johnnie Christmas and Atwood are perfectly in synch. Christmas captures Silver Age comic book goofiness while also keeping his animal renderings realistic. The colors are still bold, bright, and pastel thanks to Tamra Bonvillain. Every panel of Count Catula is goofy and expressive, while every rat kill is bloody and visceral. Atwood and Christmas also introduce several new characters, such as The Murines (highly trained mice marines), Catullus (a Roman Emperor Cat), and Fog (a lost orphan kitten), in this volume. Each of them receives a hilarious design thanks to Christmas. They all have very distinct characterizations, and it’s always enjoyable to see that interplay in the dialogue.

ANGEL CATBIRD Volume 2 seems a bit shorter on the animal facts than Volume 1. The real world fun facts (often more gross than fun) add a heightened level of interest. It was always fun to try to predict what strange story elements would have a real-world companion fact. I would like to see Atwood really dig into these strange juxtapositions in future volumes.

READ: Want another great story about animals? Find out why ANIMOSITY #1 might be the comic you’re looking for!

Overall, Atwood’s second volume is a hilarious and educational continuation of the excellent groundwork she has laid before. If you care about 1) Cats 2) Owls or 3) Cat-Owls, pick up this comic. If anything, it’s a testament to Margaret Atwood’s mastery of any medium. After reading this, I could see her winning the first Pulitzer Prize for writing a street sign.