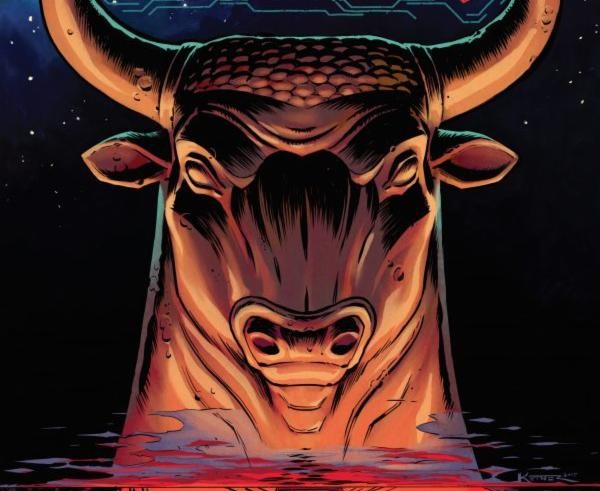 ComicsVerse interviews Chris Pasetto, Christian Cantamessa, and Lukas Ketner, the team behind KILL THE MINOTAUR, Skybound’s newest comic! We find out how this amazing team brought new life to this ancient Greek myth! Join us as we take a look at what horrors lurk inside the Labyrinth!

ComicsVerse (CV): First off, can you share the origins of KILL THE MINOTAUR and how this epic new rendition of this Myth came to Skybound?

Chris Cantamessa: Well, Christian and I had this story idea years and years ago, shortly after we wrote AIR. We both loved it, but weren’t even sure how it would come to life. As AIR was wrapping up we both wanted to continue working with Skybound. It’s kind of funny that our relationship with Skybound came through our movie, AIR (which Skybound produced). You know Skybound makes comics too? Ohhh, right! Something clicked. We realized the story for KILL THE MINOTAUR would be told best as a comic. We actually pitched it to Skybound at an AIR preview event. That got the big bloody snowball rolling.

Christian Pasetto: After we finished the script for AIR we were exploring other projects to do together, and as we discussed ideas this one really resonated very quickly. It was one of those – we have to tell this story! – moments. Then the project went into hibernation for a while, until we met Robert and the other folks at Skybound and pitched them our idea.

READ: Are you interested in what Skybound has to offer? Check out Our Interview with Skybound’s Editor-in-Chief, Sean Mackiewicz!

CV: Coming from Feature Films & Video Games, was creating a comic book a big adjustment for you?

CC: A little bit. Sure, there’s the shift to a different script format, different conventions to get used to. Fortunately, we’re comic book fans, so the medium isn’t completely alien to us. I think the main adjustment was thinking in panels and pages. To help train myself, I had a mock-up of the panel layout as I was writing each page. Are there too many panels crowded in? Do the beats flow from one to the next? Are big spectacle moments given large panels?

Then looking at the pages… Do we want a page to end on a cliffhanger or resolution? Flipping through the pages, are we varying our panel density/layouts sufficiently? Of course, when Lukas got a hold of the script he made it all so much better, bringing his artistic sensibilities to the panel/page layouts. But it was a good exercise for me to write with the medium in mind.

CP: It was definitely a learning experience! A story is a universal concept but the medium used to tell it definitely gives shape to the material in a pretty major way, so we had to learn how this new medium (for us) works. I will say one thing – our passion for comics certainly helped, but it gets a lot harder when you are not just reading them.

CV:  As a writer, was there a lot of extensive research on Greek Mythology done before bringing this title to life?

CC: We did a good amount of research on the myth of the Minotaur as well as Greek history/culture at the time. One of the main themes of KILL THE MINOTAUR is the nature of myths. Stories about great deeds, heroes, gods, and monsters, they’re loaded with embellishments and omissions. What were the real events that took place to grow into this story? The Golden Fleece is a great one to look at. Jason had to go after this mythological symbol of power… but what was it? Why was it so important?

There are lots of interpretations out there about what the Golden Fleece really was – check Wikipedia for some fun reading. Was it a valuable object? A method of mining? A land of golden grain? Someone’s actual skin? For our research, we looked at a lot of different versions of the Minotaur myth. Like many other Greek myths, there are wild inconsistencies between the versions. We wanted to make this our own twist on the story, which is another way of saying we used whatever source material we felt worked best for us. Some things were embellished, some were omitted.

CP: Research was my favorite part on this one. Especially finding all the strange areas of connection between history and mythology. There are actually ideas in the comic that were inspired by actual archaeological finds, so we sourced a variety of references, from the most grounded to the more fantastical.

CV: As the artist, was there any special research you did before working on KTM?

Lukas Ketner: Oh, sure; aside from studying the myth itself, I dug in and found all sorts of great reference to the actual time period that the story takes place in. Everything from web research to buying up National Geographic magazines and children’s history and Greek mythology picture books. You’d be surprised the stuff you can find in the kids’ section– it’s so much more visual, on average, than many of their books in the general history sections of a bookstore or library.

CV: The splash page of the labyrinth in issue 2 is breathtaking! Was this design of your own brain child or a collaboration with Chris and Christian?

LK: Most of the big set pieces like that were definitely collaborative. That scene went through a few revisions before we got the right balance of weird architecture that’s also subtly meant to evoke something…. else.

CV: I’m a very big fan of WITCH DOCTOR and your art style fits perfectly with KTM. Do you feel that working on WITCH DOCTOR has helped you visually bring KTM to life?

LK: Absolutely! And thanks 🙂 All roads lead to here, so I build on everything I’ve learned while doing past projects to whatever is at hand. I certainly developed some of my squicky creature chops doing some of the WITCH DOCTOR material.

CV: The Feast scene and the Roast Pig. I mean can you tell me the thought process that brought us to that gruesome scene?

CC: I don’t want to spoil too much for anyone who still hasn’t read issue #1 because it’s a nice conclusion that kicks off the rest of the story. We wanted to build up King Minos as a great antagonist. We also wanted our protagonist, Theseus, to get the air knocked out of him pretty early. Our goal for this comic was always to make it a horror story. To make that work, the hero can’t be too powerful, can’t have all the answers, or the aid he needs. So hopefully the shock of the feast scene gives a good taste of what’s to come.

CP: The feast is just an appetizer for the full meal that will come later.

READ : Enjoy interviews? Check out our interview with the MOONSTRUCK #1 Creative Team!

CV: KILL THE MINOTAUR is quite a strong title. Do you want the readers to be chanting that in the back of their heads as the prince navigates his people through The Labyrinth?

CC: I hope so! Like a lot of things in our book, the title seems straightforward but there are actually a number of layers to it. I’d love it if readers do keep chanting that title, and it’s meaning changes in their minds as the series progresses.

CP: It might even be a good chorus for a metal song

CV: Is the Minotaur the only monster that lurks in this Labyrinth?

CC: I don’t want to answer this too directly – it would spoil all the surprises! I will say that the Labyrinth itself is far different from what you – and our cast of characters – might expect. Also, our story is very much focused on characters. We wanted to capture the same group dynamics that you see in great horror movies like Alien and Cube. So expect a great deal of conflict between them as the story goes forward. I’m not suggesting something cliche like, “the monster is us!” But I think the real monsters become more frightening when the characters forced to deal with them are tragically flawed and don’t play well together.

CP: You will definitely know a lot more by issue 6.

LK: It depends on your definition of ‘monster’. A wise clown once opined something about how people (tr)eat each other when the chips are down.

CV: After seeing all the carnage in issues 1 & 2, is this just the tip of the gory iceberg?

CC: Oh yes. The iceberg continues down and down. It gets gory, it gets dark, it gets weird. Our poor characters will get dragged down through those depths and not all of them will come out the other side. Cue evil cackling.

CP: We seriously had a coloring problem with all the blood.

LK: There have been numerous work threads discussing and adjusting the blood consistency, even one from earlier today– there’s just a lot of it to keep track of.

CV: This is something I like to ask everybody: what are you reading right now? What’s your favorite title on your pull list?

CC: Reading GREEN VALLEY and excited to see how that one ends. Christian just got me hooked on BITCH PLANET, which is awesome. And before that, I absolutely loved THE VISION run-again, recommended by someone else. I tend to come to things late, usually when a much cooler person suggests that I read it.

CP: I am reading BITCH PLANET, GREEN VALLEY, and EXTREMITY. I am loving every page

CV: Lastly, is there anything you want to get out there about your new series? Something you haven’t been asked before or something you just love about it?

CC: I didn’t realize until recently that our first issue may seem like we’re trying to do a straight retelling of the Theseus and Minotaur story. I kind of love that people might think that. But trust me, nothing could be farther from the truth. Aside from that, I’ve really been enjoying the collaboration with this incredibly talented team, seeing the comic come together, seeing what the other guys bring to the table. It’s one thing for Christian and me to pass story ideas or script pages back and forth. Quite another when Lukas and Jean-Francois do their magic… Each new piece of artwork they send me is like a Christmas present. A monstrous, red-spattered Christmas present. If our readers get even a small fraction of that giddy feeling each time they turn the page, I’ll be happy.

CP: It’s interesting that people haven’t really asked us about the labyrinth so far, yet there are a couple of images in the first issue that should bring up all sorts of questions… not that I am going to say anything about it, but it is curious.

LK: Yeah, Christian beat me to it — we haven’t gotten many questions about that aspect of the series yet, aside from your own question above about the spread. You also get to see on page 1 of the first chapter that there’s something off about it.