In the Image comic series, GLITTERBOMB, created by Jim Zub and Djibril Morissette-Phan, the Hollywood dream is cast under a cynical microscope and found wanting. A somber, and at times terrifying, look at the underbelly of the glitz and glam of movie-making, GLITTERBOMB pulls no punches in its depiction of greed and human callousness, and that’s before we get to the supernatural violence. In anticipation of its trade paperback release, GLITTERBOMB, VOL 1: RED CARPET on March the 1st, we talked to the creators about the work and themes that went into making the series.

ComicsVerse:  For those who have yet to discover GLITTERBOMB, could you give us a rundown of what it is about?

ZUB: GLITTERBOMB is a Hollywood horror story about fame and failure written by me with line art by Djibril Morissette-Phan, colors by K. Michael Russell, and lettering by Marshall Dillon. It’s a bit of THE EXORCIST by way of SUNSET BOULEVARD with a modern twist.

Farrah Durante is an out of work middle-aged actress trapped by Hollywood’s glass ceiling–too old to be arm candy but too young to play a “grandma” part. Her frustrations and fears about the dead end she’s looking at manifest themselves in a supernatural way, and now, she’s looking for revenge against the celebrity culture that’s wrecked her life.

It’s a nasty sarcastic look at our obsession with celebrities and our own anxieties about the path our lives take when we don’t get all we imagined we could.

READ: Want more? Check out our analysis of the themes of violence and sexism in GLITTERBOMB!

CV: Can you explain the reasoning behind naming the series GLITTERBOMB?

ZUB: Beneath the glittering veneer of Hollywood’s decadence there’s something terrible and explosive. I think it speaks for itself.

CV: As co-creators of the series, how much does the writing influence the art and vice versa?

ZUB: I came up with the initial concept years ago, but as soon as Djibril came on board the whole thing really came together. Djibril and Kurt (our colorist) bring a wonderful dark reality to the page, a textured nastiness that grounds the supernatural elements and makes the drama really stick. Every scene they finished helped inspire me to push things further and make the story nastier.

DJIBRIL MORISSETTE-PHAN: For my part, I really saw my job as the visual storyteller to support the story. My goal was to inject as much emotion and mood as I could in the acting and in the settings. As Jim said, I really felt like realism in those two things would help make the supernatural stuff more effective. 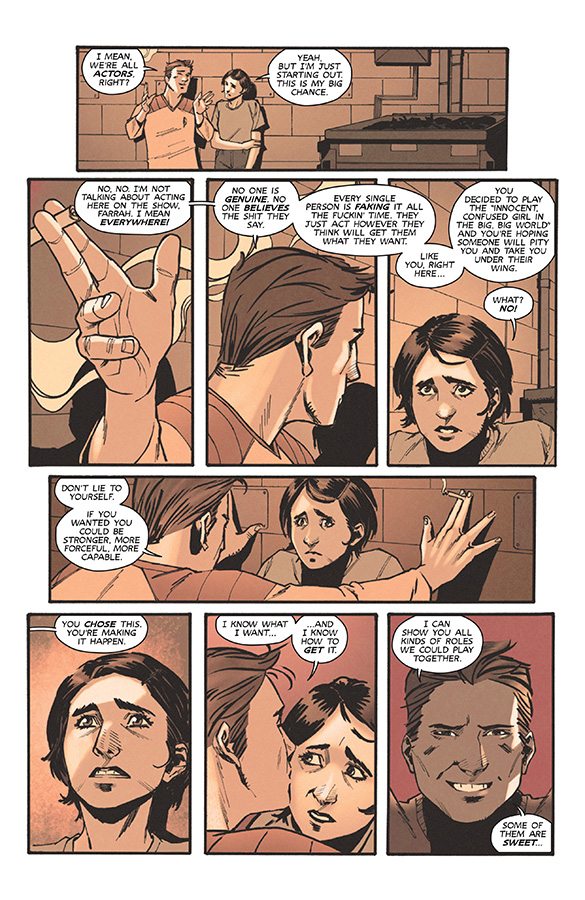 CV: Djibril, the horror on display is quite shocking and ‘in your face’. Where did the challenge lie in how full on to go with the horror?

DJIBRIL: Since most of the horror and violence in the book is used as a catharsis, I really didn’t feel like I had to hold back too much. It is used pretty sporadically throughout the book, only three or four times in a really outrageous way, so whenever I could, I went all in.

CV: At times, Farrah’s attacks are done in shadow, and what she is doing is left up to the mind of the reader. How do you strike the balance of when to show something and when to hold back?

DJIBRIL: It really felt natural just by reading the script. We had the big entrance, the big finish and one super satisfying scene of extreme, very detailed violence in the book, and to me, that was enough. The rest of the time, I felt it was better to leave it to the imagination–just from a storytelling standpoint.

CV: In a lot of ways, what Farrah goes through in her day-to-day life, and how she is treated, is more horrific than the supernatural elements of the book. Why do you think she keeps going?

ZUB: Like a lot of people trapped in a difficult situation, she can’t see past it. Hollywood, with all its terrible ego and selfishness, is what she’s used to. The negativity and self-loathing builds up over years until she doesn’t know where to go or what else to do.

DJIBRIL: Jim is right. She’s trapped in a system, a machine. And that machine is carefully built to keep her from getting out of it. That’s part of why Hollywood is so profitable; the dream it’s selling is what brings and keeps people in.

READ: We interview Kaare Kyle Andrews, creator of RENATO JONES, about his critique of the rich ONE%!

CV: LA LA LAND seemed like a very Hollywood-ised version of dealing with rejection in L.A. but with the message that anyone can make it after all. GLITTERBOMB is the complete opposite of that, with good people in Hollywood being few and far between. Does reality lie somewhere in the middle, or is GLITTERBOMB, to a degree, based on personal experience and anecdotes?

ZUB: LA LA LAND is pure Hollywood fantasy and very entertaining, but it’s the exact kind of stuff we’re eating away at with GLITTERBOMB. How many people live and work in Los Angeles? How many of them would like to be successful, famous, and rich? How many get to be?

GLITTERBOMB and LA LA LAND are both fiction, but there are a heck of a lot more Farrah’s in the world than there are Mia’s. The overwhelming majority of people don’t get to be what they dreamed and don’t get to be famous. The elusive quality of fame is one of the reasons why so many people aspire to it. When you’re not the one-in-a-million but can’t let go of that desire because Hollywood won’t stop selling you that mirage, what comes next?

CV: Could the demon/monster who infects Farrah be seen as the hero?

ZUB: Hero, villain, a tragic deluded woman destroyed by forces beyond her control, or a powerful force for change fueled by revenge…She’s whatever the reader wants her to be. I purposefully left that open to interpretation.

CV: Is there a moment in the series that captures what GLITTERBOMB is about?

ZUB: Those first 3 pages where Farrah talks to her soon to be ex-agent. It’s the introduction, the inciting incident, and a simple summation of what it’s all about. 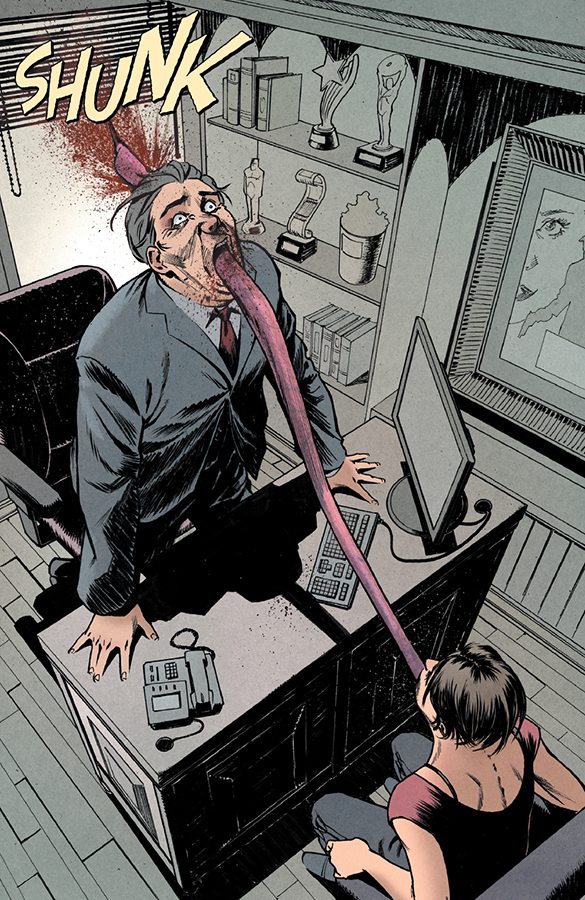 CV: The essays by Holly Hughes (printed in the single issues) are also included in the trade paperback collection. At what stage in the production of GLITTERBOMB was it decided these would be a good fit for back matter?

ZUB: I had thoughts of including “true Hollywood stories” content right from the get-go, but honestly, I wasn’t sure I’d be able to track someone down willing to dig in and write the kind of material I knew would help broaden what we were covering. When I was doing research as the series developed, Holly’s article about being abused on set was one of the pieces I kept coming back to. It struck that perfect balance between reflecting on the nature of Hollywood and reflecting on her own personal issues. It was exactly what I was looking for.

Finally, on a bit of a whim, I reached out to Holly on Twitter and asked if I could send her the series synopsis and first issue. She agreed and, thankfully, really loved it. We nailed down her involvement just after solicits, so only about a month before the first issue went to press. It was a tight schedule, but her essays add a lot and I’m glad they’re in there.

READ: Love gore? We examine EC Comics and the art of horror!

CV: Without going too much into spoiler territory, after reading the first issue, I expected more of a slow burn when it comes to the story. But by issue 4, it becomes a no holds barred horror fest. As storytellers, were those choices made early on in the creative process? Was it always heading to that finale at Donby Theatre?

ZUB: The nasty confrontation during the charity event was always part of the plan. Elements of the story changed as I went along but that big pay-off in issue #4 was there right from the get-go. We wanted each issue to heat up and issue #4 is just a full-on conflagration.

CV: In a way, GLITTERBOMB resolves itself in this arc. What are the plans for the series going forward?

ZUB: The next mini-series arrives in the Fall. The focus is on Kaydon as she gets pulled into a world of fame and manipulation she never expected. Marty (Farrah’s son) and Isaac (the detective) are in the mix as well. It’s a continuation, but italso stands on its own as Kaydon’s story unfolds.

CV: Before we let you go, are there any future projects you’d like to mention to your fans?

ZUB: I’ve got a full slate right now, but I’m having a blast. In addition to GLITTERBOMB, I’m writing WAYWARD at Image, THUNDERBOLTS for Marvel, DUNGEONS & DRAGONS: FROST GIANT’S FURY for IDW, and have other projects in development to be announced later this year. If people want to keep up with my work they can check out www.jimzub.com.

DJIBRIL: Other than GLITTERBOMB, I’m doing some work for Marvel, and I’m working on a personal graphic novel project, none of which are announced yet. If people want to keep up to date, they can follow me on twitter @DjibrilMP or on facebook at www.facebook.com/djibmp/.

GLITTERBOMB, VOL. 1: RED CARPET will be released in select comic shops on March the 1st.