Hitting the shelves on the 5th of April, BLACK CLOUD #1 opens up a whole new realm of fantasy, but only if you’re willing to pay the price. Written by Jason Latour and  Ivan Brandon, with art by Greg Hinkle and colors by Matt Wilson, BLACK CLOUD #1 invites you to pull back a veil on hidden worlds a rain drop away from ours. In anticipation of this new series, we caught up with the writers to discuss their process and what BLACK CLOUD is all about.

ComicsVerse: Would you be able to give us a breakdown of what BLACK CLOUD is about?

Jason Latour: Well… it’s about a young woman named Zelda who’s from a strange land where the strongest imagination rules. But after a failed revolution, Zelda ends up busted & broke in New York City.

So what’s a homeless exiled revolutionary with keys to a magical realm to do? Why sneak rich kids back to her homeland for cash of course to But it’s not long before the biggest pay day Zelda will ever see goes sideways– and both her home and ours are out to get her.

CV: How did the two of you come to co-write the series?

Ivan Brandon: Jason and I have a lot of meandering and drunken conversations, and one day we had one about the reflections of cities in the water, and we couldn’t let it go. We’ve been trying to shake it for years.

JL: Over time the focus of that conversation became more and more about how narrow, and interchangeable people’s definitions of reality are, especially when it comes to living as an artist or a writer. To be decent at it, and to make a living, you have to live pretty deeply inside your own head and heart, but also stay very aware of the outside world. Those places smear or get confused easily. And since Ivan and I knew each other when we were navigating our first brush with that, I think it made it easier to do a story about it together.

READ: Catch up on LOOSE ENDS, written by Jason Latour, with our review of #1 and #2!

CV: What’s it like to mesh your writing styles together? How would you describe your styles as they are on their own vs. combined?

IB: I wouldn’t endeavor to describe my style, but working with Jason is like working on some alternate reality version of myself. We’re not the same, but our sensibilities are close enough that he adds a depth of perspective I can’t get to on my own. It’s like adding an extra gear to the drive, but it’s a gear for a completely different kind of vehicle.

JL:  We’ve just embraced playing different roles in order to try and get someplace new.  If you’re doing it right, every comic you do is kind of experimental. There are skills and experiences that carry over, but it takes time to figure out how to make each and every one.

Everyone has different talents and points of view, but a shared philosophy is what’s most important. That’s where we start. We sit down, and we get on the same page philosophically.

Then we run off and do our individual jobs. We hand Greg and Matt as strong a plan as we can, knowing full well that it’s got to change, and inspire change for them to do their jobs. And then once they’re done Ivan, and I get together, and we take another look. It’s been pretty organic. And that’s surprised even me. All the books I work on tend to swim in their own stream, even my Marvel work, but it’s nice to see that can happen on something like this where it’s a group of creators charting that course together. 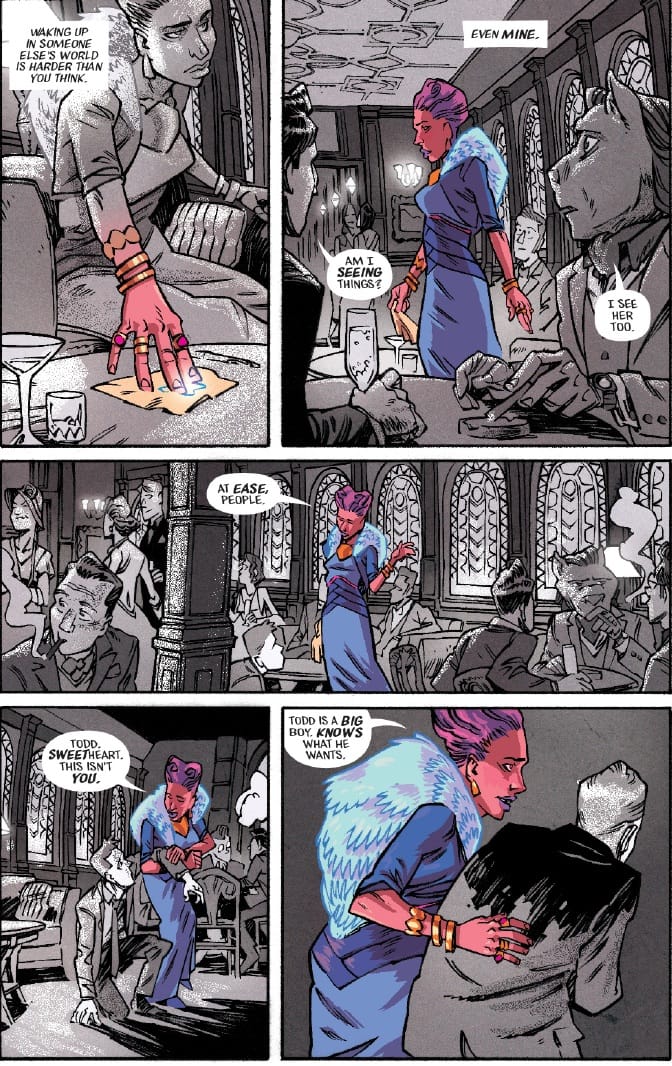 CV:  Zelda seems to have chosen to leave her world, yet she keeps coming back to it. Always running towards something, but running from something else too. What makes her tick? Basic survival or something more?

IB: Like most people, Zelda’s on a long road that leads away from herself, but those roads tend to be circles.

JL: There’s something about where you’re from that can really burn you up when you feel like you’ve failed or been judged a failure by the people you grew up around or with. Like Ivan said, it’s a difficult orbit to escape the trajectory of.

CV: Story itself seems to be a powerful theme that runs through Issue 1. How can it shape us for good and for ill? How important do you believe story is in the real world?

IB: Look at our every headline. I think the world has learned the power of story in the last couple months at a level it hasn’t seen in a long, long time.

JL: Yeah, exactly.  So the more and more we got into this it became obvious that our story was about someone wrestling with that divide between fact and fiction.  A character in Zelda, whose ability to reshape her reality has finally created conditions she can’t seem to change with a snap of her fingers. The lines have blurred beyond recognition. I think that’s increasingly relatable.

CV: I loved Greg Hinkle’s work on AIRBOY and the RATTLER and how he was able to balance fantasy and reality. How does his style contribute to telling the story behind BLACK CLOUD?

IB: The art’s the front line of the story. Everything’s just an idea until Greg and Matt give it weight. Everything changes once Greg shows us the reality of our world and characters.

JL: Yeah, Greg’s just an art monster. But he’s also such a sweet, genuine and down to earth guy. It’s almost like he was BORN to do a story that required balancing extreme ideas. His ability is very rare in comics. Most people either mimic reality or they draw solely from their own inner wellspring. It’s a real challenge to synthesize those approaches, and we’ve added an extra step in that we’re asking Greg to shift gears sometimes within the same drawing. I can’t tell you how difficult that is, and I can’t wait for you to see how expertly he pulls it off.

READ: Check out our 3 reasons Image Comics is a top publisher!

CV: Matt Wilson’s use of color in the book is astounding. Our world is alive with color, yet Zelda’s is (mostly) monochrome. Can you tell us more about how that stylistic choice came about?

JL: Take everything I just said about Greg and ditto it. These dudes are a two piece duo with the weight and substance of a symphony orchestra. Everything Greg’s asked to do in terms of shifting gears is equally as challenging for Matt. And yet, he’s cool as a jet pilot.

IB: There’s definitely a lot of color in both worlds, but there are different rules at play in Zelda’s world that allow, for example, an environment where no one’s allowed color except for the place’s boss. A place like that makes an ideal spot for Zelda to break the rules and get herself in trouble. 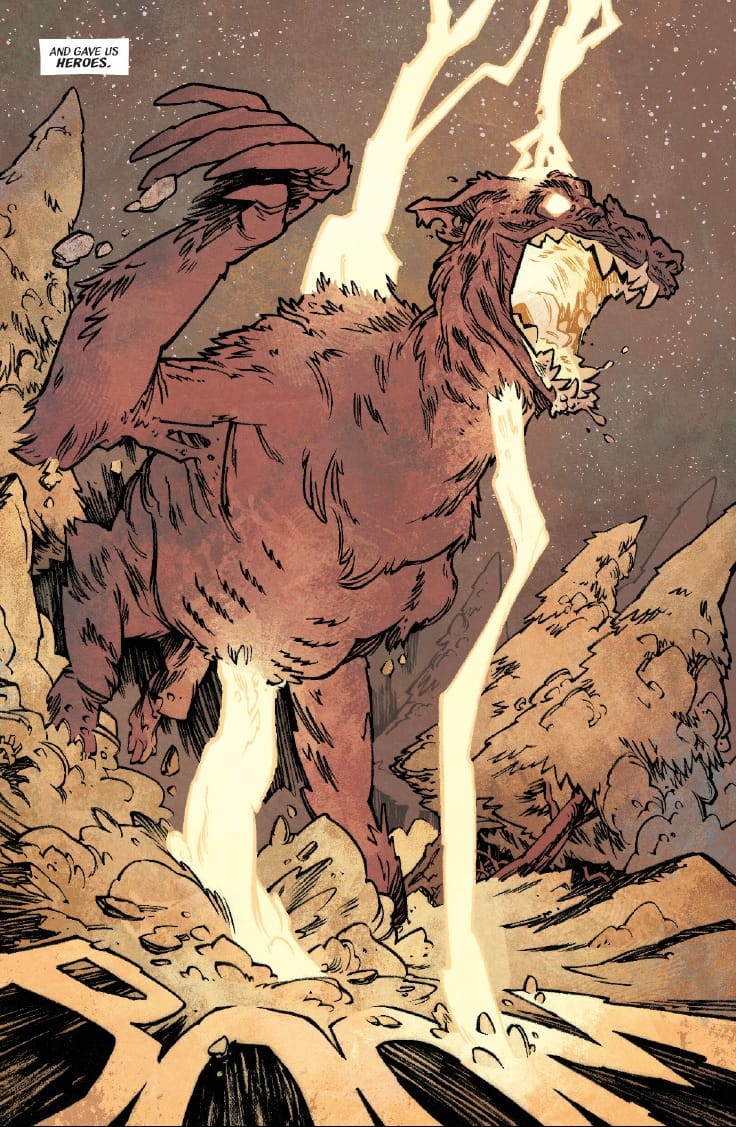 CV: What can we expect from the first arc of the series? And how far have you planned ahead?

IB: We’re working on issues 6 and 7 right now. You can expect us to push Greg and Matt’s incredible talent as far as we can and to be further inspired to new things by the surprises we find in their pages. The best comics work best, I think, when the whole thing volleys organically between folks who are really inspired by each other. At least for our part on the writing end, there’s been no end to that inspiration.

JL: The funny thing about doing a story about a world driven by imagination is that you quickly discover how much imagination is very concretely and directly linked to what’s going on in your real world. We’re finding that a lot of what we wrote a year ago has become as topical as a story with talking lizards and alternate realities can be. So I think we’ll likely be exploring that till this series is done.

CV: From concept to the printed issue, is BLACK CLOUD #1 what you envisioned it to be?

IB: That’s truly the best part of a collaboration, being the first person on the ride. All of our best-laid plans are less carved out of rock and more some radioactive morphing isotope. This thing has changed every day from what we started with, as the characters started to step out and squint into the sunlight that Greg and Matt built for them.

JL: From the time we announced this a year ago, nothing about the world we live in is the same as what I envisioned. I think one of the great powers of serial comics is their malleability. Embracing the fact that we’re only charting a course, but we don’t know everything about our journey, much less our final destination, is what’s made this project fun.

READ: Greg Hinkle’s work on AIRBOY is phenomenal. Read our review of the series here!

CV: If Zelda came to you, and offered to take you to another world, would you take it? And where do you think she would take you?

IB: I wouldn’t trust Zelda for a minute, but I’m perpetually guilty of going on ill-advised adventures. Somebody tell my mom I love her.

JL: Depends on the day. But I could be more easily swayed by the promise of BBQ. Especially cartoon meats. The food they eat in animation always looks like it tastes a billion times better than real life.

CV: Before we wrap up, are there any other projects you’d like to tell your fans about?

IB: Nope. Black Cloud is in all the best stores on April 5th.

JL: I’ll happily be a bit more of a shill. Despite some delays, SOUTHERN BASTARDS is still doing its best to kick redneck ass as often as possible. Our sister book, and my original approach to Southern Crime Fiction: LOOSE ENDS sees its last two chapters and long awaited conclusion soon. And SPIDER-GWEN is still swinging strong every month.

BLACK CLOUD #1 will be released in select comic shops on April the 5th. If you want to keep up to date with their work, you can follow them on Twitter, @jasonlatour and @IvanBrandon.