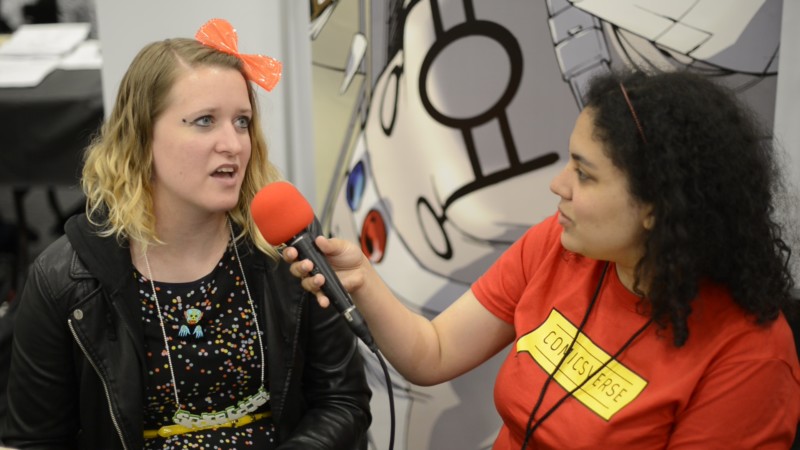 Making her professional debut as writer-penciler-inker-colorist for the English manga FOOL’S GOLD, Amy’s star has only risen. Amy soared as the inker and penciler for MADAME XANADU, the penciler for 2011’s BATWOMAN, and cover artist for SUPERGIRL. Then Amy entered the stratosphere with ROCKET GIRL.

READ: “Who runs the world? Girls!” True for the world-world, but also the comics world.

Successfully Kickstarted on June 7, 2013 with $38,000, ROCKET GIRL follows 15-year-old cop DaYoung Johansson from an alternate reality 2013. DaYoung, learning her reality should not actually exist, returns to 1980s New York City to save her world — and to fly jetpacks, of course! ROCKET GIRL was a critical and fan success, being published for two years by Image. Amy and ROCKET GIRL’s writer, Brandon Montclare, made a name for themselves in the industry. So much so, that they caught the attention of Marvel. With a cadre of Marvel heroes at their disposal, the dynamic duo of Montclare and Reeder chose to create an original character to fight alongside a Kirby one. Hence, MOON GIRL AND DEVIL DINOSAUR was born.

Moon Girl, aka Lunella Lafayette, is a public school student in the Lower East Side of Manhattan. She is a scientific genius, a heroine who has fought alongside Ms. Marvel and Ironheart — and a black girl. Lunella has become a critical and viral hit, popular with children and adults alike! Reeder, as co-writer and cover artist, has placed a young black girl in a medium (comics) and genre (superhero) that still favors the big (white) boys. Lunella not only holds her own in the Marvel Universe but is fun and fun-loving (take note, Batsy)! Lunella is as much a breath of fresh air as Amy Reeder is. Amy Reeder is a shining star in the comics universe.

We spoke to Amy Reeder at Five Points Festival. Watch to get her take on what it is like to be a writer and artist at once, the importance of young female protagonists, and where Lunella and Devil Dinosaur are heading off to next!